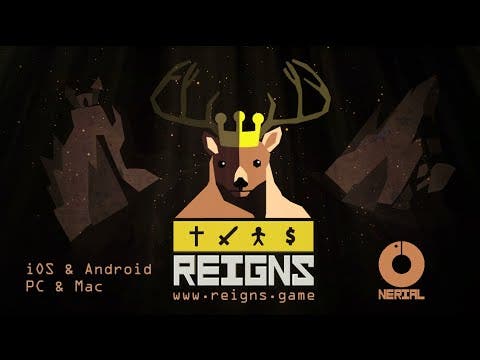 Benevolent developer Nerial and oppressive game label Devolver Digital have released the magnificent kingdom deck adventure Reigns on the App Store, Google Play, and Steam for the crowd-pleasing price of $2.99 [reignsgame.com]. The more extravagant PC subjects can purchase Reigns: Collector’s Edition that includes the original score by Disasterpeace, an interactive soundtrack app, and the Book of Mystery for $5.99 on Steam.

Aspiring monarchs will need to survive the seemingly never-ending gauntlet of requests from their advisors, peasants, allies, and enemies while maintaining balance between the influential factions of your kingdom. Swipe left or right to cast your decision from your throne but beware; each decision you make might have implications and unfortunate consequences down the road that could put your reign and family’s dynasty at risk. Over 750 unique cards, interconnected story paths, and surprise events assure that no two reigns are ever the same.

Reigns fans from around the world can join Devolver Digital for Twitch Plays Reigns today, August 11 from 12:00PM – 5:00PM Pacific on twitch.tv/devolverdigital where free codes for the game will be given away with each achievement unlocked to the peasants viewers in chat during the stream.