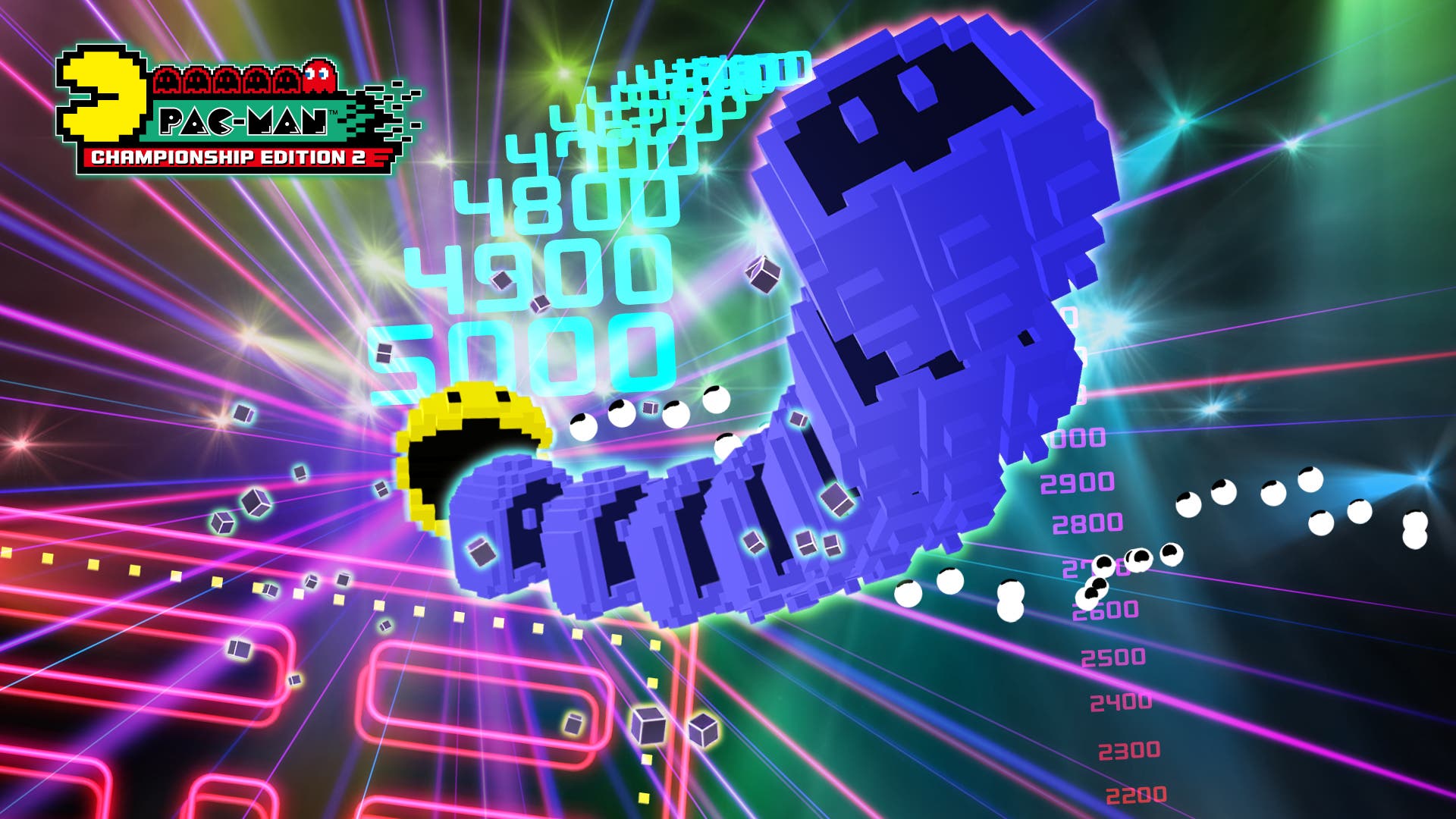 There’s a tutorial and series of levels that teaches the new features and rules well so you can get acquainted with them, which is great for old and new players. It is just wise to play through each of these levels to get you up to speed, even if you’re a pro at PAC-MAN CE DX+. A bonkers change for PAC-MAN Championship Edition 2 is the “hitting” system, which goes against anything you’ve ever learned in PAC-MAN. When you’re not powered up, you can hit a ghost head-on and knock it back. Do this enough and it’ll get angry, but be reset to the main box. However, it is highly agitated and will come hunting for you and be a one-hit kill on you. You can do a bomb jump that’ll bring you back to the start to quickly grab a fruit and go to the next board. Want to stop on a dime? You can brake to stop dead and reverse course to avoid a collision or maybe not taking a corner you intended to. The way progression works in PAC-MAN Championship Edition 2 is a bit different, as you just need to fill a meter to unlock the fruit rather than eating all of the pac-dots along the way. While these new features add something, they aren’t as exciting as the other existing features of the game and makes for a feeling of too much is happening.

PAC-MAN Championship Edition 2 has two main modes: Score Attack and Adventure. Score Attack consists of Single Train where only one train of ghosts will accumulate during a run, Regular where the new features like bomb jumping take an integral role, and Extreme for 5-minute runs. Practice lets you loose for 10-minutes on a course to hone your skills. Playing the game means survival still integral, but is only needed for the 5 or 10 minutes that each level is timed for. Adventure mode is a bit more focused on a solitary task, to get through six levels before the timer runs out. Completing a level without the timer running out earns you a star, increase the difficulty and you earn more stars. While I was not impressed early on with PAC-MAN Championship Edition 2, the game is still fast and exciting once you get into the groove, using the path of pac-dots as something to follow. It is still great to see the path laid out before you and almost go into auto-pilot as you move throughout a level. Using it is still great for beginners as well as advanced players to develop ideal routes for getting through a level efficiently. The life system is used but it is easy to earn lives back and not too detrimental to lose lives. The immediate jump to a new maze without any waiting or loading is essential to the experience. As the time begins to run out, the faster everything moves doesn’t feel overwhelming as you once thought. Weirdly, the game feels stale and outdated from the get-go. The visuals don’t pop like they used to, and the soundtrack is less intense.

When you reach a level where they give you the power pellet, is absolutely satisfying to eat a train of ghosts, and even multiple trains of ghosts. As you’re eating a train of ghosts, the game this time cuts to a 3D view of PAC-MAN working his way through the dots and it is kind of disorienting as you lose where you are on the maze. When levels are loaded with sleeping ghosts, some backgrounds and maze types work better than others as far as visually identifying things. I often bumped into a lot of sleeping ghosts rather than just turning the corner past them because of this. While the game can randomly select them, every time you play a level in any mode, you can choose the maze, background, music, and character – with more to unlock as you progress.

Where PAC-MAN 256 pushed PAC-MAN forward, PAC-MAN Championship Edition 2 takes a single step backwards over iteration and innovation. PAC-MAN Championship Edition 2 just isn’t the second coming of the “PAC-MAN Jesus” we’ve come to praise with its first installment onto XBLA all those years ago. And that’s okay, it is just a game that’s more of the same which might be all most might be wanting – for me, I was hoping for more. The introduction of new gameplay elements tended to focus even less on score-chasing. Despite these issues, PAC-MAN Championship Edition 2 has lots do to across Score Attack and Adventure modes, whether it’s going for a harder difficulty or getting your score higher to beat a friend on the leaderboard. This makes for a longer-lasting game than its predecessor, for better or worse.