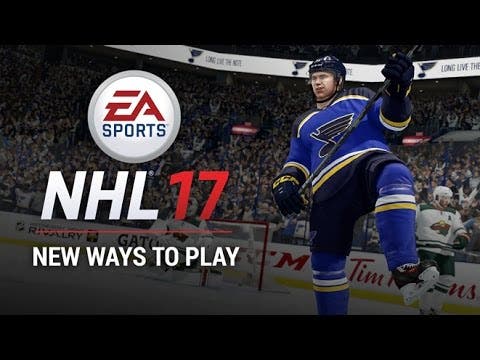 NHL 17 releases onto Xbox One and PlayStation 4 today

Electronics Arts Inc. (NASDAQ: EA) today released EA SPORTS™ NHL® 17, the most exciting EA SPORTS NHL® to date, on PlayStation®4 and Xbox One. NHL 17 is available in stores and for digital download today in North America and on September 15 worldwide.

From the crease to the open ice to behind-the-scenes control of an entire franchise, NHL 17 lets you shape your legacy no matter how you play the game. Built with more fan feedback than ever before, players can live out their hockey fantasy in three all-new game modes, enjoy deeper and more customizable experiences in their fan-favorite modes, and own every zone on the ice with new on-ice gameplay features and improvements. Whether you’re a skilled hockey veteran or lacing up the skates for the very first time, the new ‘Semi-Pro’ game difficulty and Visual On-Ice Trainer give fans the experience and coaching needed to elevate their game.

“We’re really excited to deliver completely new ways to play the game for our fans,” said Sean Ramjagsingh, Lead Producer, NHL 17. “Combined with the new gameplay features and deeper experiences in our fan favorite modes, NHL 17 is the biggest year-over-year release we’ve ever had and we can’t wait to get it into players’ hands.”

Draft Champions, Franchise Mode and World Cup of Hockey introduce three new ways to play hockey in NHL 17. Feel the thrill of fantasy draft night in Draft Champions and make fast picks of superstar players that you immediately take to the ice. Manage the business in Franchise Mode where players answer directly to the team owner, each with unique goals and challenges, while managing budgets, players, promotional nights – and even relocation. The new World Cup of Hockey mode lets players compete for glory on the international stage as their favorite national heroes.

In addition to all-new game modes, players can take complete control of the ice with more responsive gameplay using authentic goaltenders, new Net Battles on offense and defense, and bone-crushing Collision Physics. Dozens of new goal celebrations bring the biggest game moments to life and the most customizable EA SPORTS Hockey League ever gives fans the power to build the player, team and arena they’ve always dreamed of. Hockey Ultimate Team™ reaches new heights of collecting and strategy with the introduction of ‘Synergy’ – a new mechanic that adds deeper strategic choices based on pairing line-mates with similar playstyles to grant perks for the entire line and team.

EA Access± members on Xbox One can play 10 free hours of NHL 17 and receive a 10% discount on purchases of the full game.

NHL 17 is available now in North America and will release worldwide on September 15, 2016 on Xbox One and PlayStation 4.