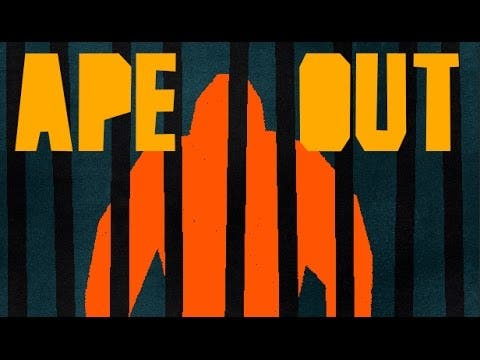 APE OUT announced by Devolver Digital, play the content of the trailer in a demo now

Independent developer Gabe Cuzzillo and primal game label Devolver Digital have announced Ape Out, hitting PC and consoles this summer. Fans of video games and apes and video game apes can actually play the Ape Out reveal trailer – a playable trailer, if you will – via Steam by visiting http://www.apeoutgame.com starting …now.

Ape Out is a wildly intense and colorfully stylized smash ‘em up about primal escape, rhythmic violence and frenetic jazz. Build up nearly unstoppable momentum and use your captors as both weapons and shields to crush everyone on your procedurally generated path to freedom.

“Since I was a little boy one of my hobbies has been to secretly set zoo animals free and watch them run rampant, killing their captors in the most violent ways possible,” said Devolver Digital CFO Fork Parker. “Ape Out captures that child-like sense of wonder in a very profound and meaningful way and also adds a drum beat.”

Ape Out is playable – the game, not the trailer – at PAX East this weekend in the Devolver Digital booth if you can survive the harsh cold that is Boston. For more information, visit apeoutgame.com and follow developer Gabe Cuzzillo the clever handle @GabeCuzzillo on Twitter.