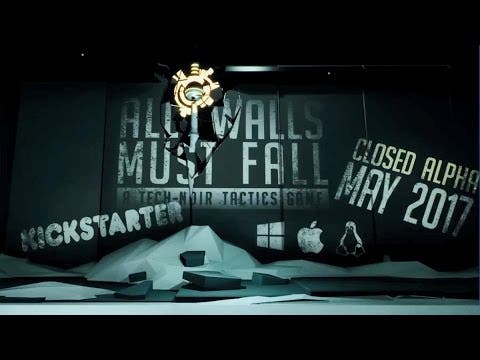 inbetweengames launches Kickstarter for tech-noir game, All Walls Must Fall

Independent developer, inbetweengames, today announced that the Kickstarter campaign for its tech-noir tactics game – All Walls Must Fall– has gone live, with the campaign set to run until Wednesday, 19th April. Scheduled for launch on PC, Mac and Linux, All Walls Must Fall combines classic turn based gameplay with a heavy emphasis on music, inspired by the likes of X-Com, Syndicate and Rez. With a sleek cyberpunk aesthetic and pulsating electronic soundtrack, inbetweengames have turned to Kickstarter in order to realise their dream. Check out the All Walls Must FallKickstarter Page: https://www.kickstarter.com/projects/inbetweengames/all-walls-must-fall-a-tech-noir-tactics-game

The initial funding goal of €15,000 will allow the team to run a closed alpha on itch.io for Kickstarter backers, followed by an Early Access release on Steam. The team will also add additional stretch goals, allowing them to deliver additional features and content to All Walls Must Fall once the original crowdfunding target has been met. These range from improved combat, diverse environments and intricate dialogue options, to a larger range of weapons. Acts 2 and 3 will also be included as additional stretch goals and will bring further content to expand the story, introducing a new playable character in each Act.

“We’re hugely excited to share our Kickstarter campaign with the public. While our time working on AAA titles at Yager was a wonderful experience in terms of lessons learnt and friends met, we decided it was time for us to do away with compromise and make the game we’ve always wanted to,” said Jan David Hassel, Designer of inbetweengames. “Drawing on our combined love of cyber-punk and film noir, as well as classic tactics and music games, All Walls Must Fall is a unique reinterpretation of those influences tied together by a healthy dose of style. We can’t wait to embark on this journey with backers to make All Walls Must Fall the best game it possibly can be.”

In the world of All Walls Must Fall, the Cold War never ended. For 150 years, both sides have used time manipulation technology to observe and counter each other’s every move. Now this fragile state of affairs is approaching breaking point, as a rogue nuclear strike has been ordered that will send the world into turmoil. Both sides have scrambled to send agents back in time to find the person behind the order in the hope they might prevent it. If they fail, the whole world will turn to ash, forever.

All Walls Must Fall is an isometric tactics game where action happens to the pulsing beat of the music. You control time travelling secret agents as they jump and loop through a single night in the city of Berlin. Using a pausable real-time system, carefully plan your decisions and use powerful time manipulation abilities to your advantage, as you carry out your mission in the shadows or in plain sight. Levels are procedurally recombined using a bespoke system developed by inbetweengames, giving All Walls Must Fall a highly replayable campaign structure, while still offering individually crafted components and set-pieces.