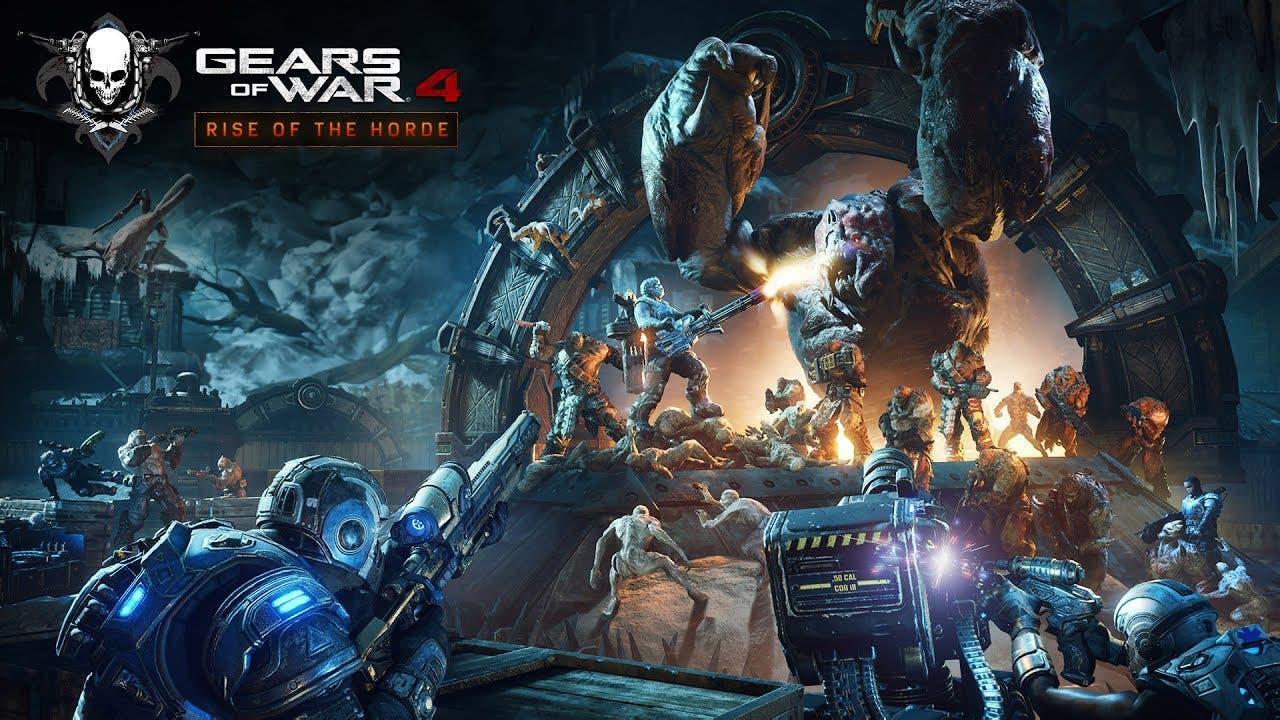 Gears of War 4 getting its biggest update, called “Rise of the Horde” on June 6th

From Press Email and Xbox Wire:

Prepare for the biggest ever update in the history of Gears of War 4 – and all for free – with the Rise of the Horde arriving on June 6th!  And, if you haven’t dived into the next chapter in the epic saga of Gears of War 4, you can try it for free later this month with our Game Trial!

Horde is getting a massive shakeup with the arrival of Rise of the Horde, with 15 brand new Horde Skills (three per Class) to collect, Level 6 skills, Loot Drops, tuning changes and new difficulty levels!

Play your Class. The Scout has new abilities like Cloak to turn invisible in their quest to pick up Power, while Heavies can take the Berserker and Last Stand skills to deal more and take more damage with Heavy Weapons as they get lower on health.

Snipers can take Magic Bullet to get increasing headshot damage bonus rewards, Soldiers can use Siphon to earn more Power for Grenade plant kills, and Engineers can resupply their comrades with ammo when their Fortifications kill enemies with the new Salvage skill.

This is just a taste of some of the new Skills to collect this June. In addition, all your existing Skills can now be taken to Level 6, making them even stronger than ever before! A full list and breakdown of all 15 new skills are available on GearsofWar.com.

In addition, defeating Bosses now comes with rewards – each Boss Wave you defeat at Wave 30, 40 and 50 will drop a singular random Horde Skill. Harder difficulties increase the likelihood of a rare drop, so challenge yourself for the best chance at a high-quality Skill drop.

As with our last major update, we’ve also got more in store for Season Pass Holders. When the update lands on June 6th, Season Pass Holders will have an exclusive Gear Pack containing 5 of the new Horde Skills waiting in their inventory along with a bonus free Horde Expert Pack!

Free Trial of Gears of War 4

We also have some exciting news to share for Xbox One and Windows 10 gamers who haven’t jumped in to the Gears of War 4 experience yet. From June 9th – 15th, we’re offering a Trial version of Gears of War 4 to download for free!

This full game trial will offer 10 hours of free play in Gears of War 4, including the entire first Act of the Campaign plus full  – yes, full! – access to the Horde and Versus experiences. That means you can try out Rise of the Horde on top of all the great content that exists in Gears of War 4 today!

For new players, we’ll be offering special bonuses to earn as you level up including guaranteed characters, weapon skins and new Horde Skills to try. So you can put those Horde Skills to good use, we’ll also be turning on Double Class XP throughout June – the more you level your Class, the more Skills you can use on the battlefield!

Everything you earn in the Trial is yours forever including achievements, Cards and Campaign progression. Mark your calendar and prepare to download the trial on Xbox One or Windows 10 – grab it while you can, it’s only available for download between June 9th and 15th! Head over to our official Game Trial page for full information on all the content on offer along with FAQs.

With new and improved skills also comes tougher challenges. Prepare to take on the toughest fight in Gears of War history with the new Inconceivable difficulty level, coming to both Campaign and Horde.

In Horde, Inconceivable is a direct step up from Insane – you’ll be even weaker, and your enemies will be even stronger. Level up your skills to their new Level 6 peak and maximize the bonuses of your classes if you want to get through all 50 Waves of Inconceivable.

In Campaign, Inconceivable takes a more Survival based twist, giving you less health than Insane difficulty but also less health to your enemies. That’s because surviving on Inconceivable is all about effectiveness – weapons and crates drop significantly less ammunition, so you’ll have to make every shot count with whatever pickups you can find on the battlefield.

In addition, Ironman Mode comes to both Horde and Campaign with Rise of the Horde. Ironman means one simple thing – don’t die. In Campaign, one death will restart your game back to square one. In Horde, no COG tags will be dropped when you die and one failed wave spells the end of your run to Wave 50. You can toggle Ironman on any difficulty that suits you, and there’s some achievements out there to chase for fans willing to take on the ultimate high-risk challenge!

20 new achievements are set to arrive with Rise of the Horde, offering an extra 500G total Gamerscore to collect in Gears of War 4!

Prepare to take on Ironman and Inconceivable across both Horde and Campaign if you want to master this added list of achievements. For the bravest out there, grab a friend to take on the Legends of Sera achievement, which challenges you to beat the game in Co-Op with Ironman enabled on Hardcore or above.

The Gears of War 2 map you know and love is back. Set in a mountainside resort, this village sits below a mountain with an unstable build-up of snow at its peak. During the match, the snow avalanches onto the battlefield, killing anything in its path and changing the entire middle of the map. Prepare to fight for the Boomshot the moment the snow falls.

This returning map from Gears of War 3 brings an intense close-quarters flavor to this month’s map drop. Cover in the middle of the map can be dropped or raised with the press of a button – sneak around your opponents flank to give them a nasty surprise as their cover disappears from right in front of them!

The Gear With The Golden Gun

There’s even more reason to play this May with the debut of a brand new Versus Special Event: Golden Gun. This custom-built mode arms you with one bullet and a hip-fire only Boltok – land your bullet to instantly return it to the gun, otherwise prepare for the longest reload of your life. It’s the ultimate game of Gears chicken, and we can’t wait to see fans get hands on this month.
There’s even more to talk about that we couldn’t cover in this article, including the full list of new achievements, details on all the new Skills, tuning updates, new ‘Wings’ Re-Up Levels and more. Head on over to GearsofWar.com/Rise-of-the-Horde for the full breakdown. We’ll see you online to take on the Horde next week!