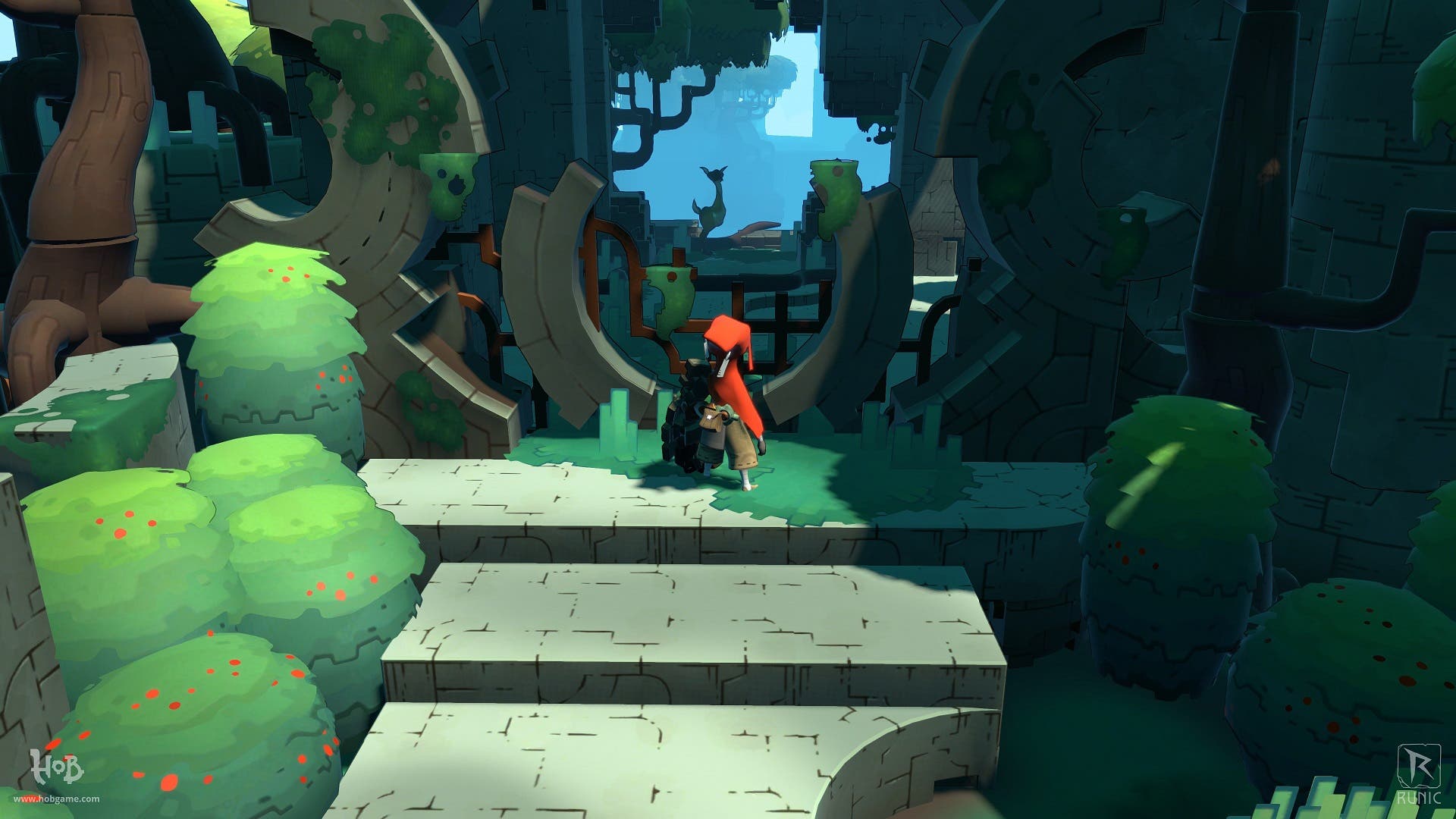 Thrust into a world, colorful and pretty, no idea who I’m playing as, what I’m playing as, or where I am. Yet the world immediately captivated me, already making me feel that special tinge of gaming magic that only a handful of games do over the ages. I didn’t intend to feel this way, as I hadn’t heard of Hob up until this review opportunity and perhaps readers are in the same boat, but everyone who loves adventure games should put on their list to-play list ASAP.

Hob is one of those lovely games that doesn’t feel the need to really offer much in the way of story or exposition. That’s ok, instead players are presented with a world that’s both colorful and seemingly peaceful, yet has an underworld, dark, cold, and mechanical. How this world came to be and why it can shift up and down, interlocking gears, shifting platforms, and moving entire sections to other areas will have mouths more in awe than anything else. Playing as what I would assume is Hob, the game never clearly spells it out for you but it appears something odd is going on in the world and the main character is gifted with a new arm and abilities to move through the world. The entire experience takes on a very original Zelda like approach in that players are dropped into a world with little reason, abilities are earned, which in turn are used to progress new areas or traverse old, but with more options at hand.

Starting with a limited move set, players can attack with a sword, attack with a mechanical hand, and dodge. Eventually upgrades are found, earned, and unlocked to include dash attacks, teleport moves, and grappling mechanics. The flow of unlocking moves and figuring out how to solve elaborate puzzles that can take place over various screens could seem intimidating but it’s truly delivered here in such an organic way that it never felt frustrating to me. Sure there are a few moments where I wasn’t sure where to go, but a little bit of exploration elbow grease applied, I could put two and two together. Combat isn’t exactly deep but it’s rewarding in knowing when to dodge, how to attack enemies, break defenses, and more often than expected I’d loose. Yet luckily with the abundant of save checkpoints littered throughout the game, getting back to progress is relatively pain free. Visually, Hob has some great vistas and nice design overall, as it’s showcasing a more cartoonish, almost cell shaded vibe, there are numerous times where the camera angle will move from a top down playing perspective to side scrolling, cinematic angles, or even just a moment to stop and reflect on the environment as the cameras show a wide shot of the beautiful vantage point. The most impressive things happen when switches are hit and puzzles are solved and gigantic pieces of the environment, shift, mold, and click together like an elaborate rubiks cube. If that game wasn’t satisfying enough to play as it is, this just had me in awe every time.

Runic Games has something special here and every facet of the game reeks of quality aside from one element. System performance on PS4 has a ton of stuttering or slow down moments. They have already updated the game a few times since it launched and the post support seems great, but this issue is literally my biggest and only issue. In an otherwise fantastic experience, captivating in its grandeur, this always took me right out of the experience. That blemish aside, every time I played Hob, I just got lost in its world, exciting to see everything the game would throw at me next. Exploration, combat, and the world all merge together in such a cohesive thought with almost no frustration, it’s just a sublime experience even with its performance issues.. Hob wasn’t on my list of must play games, or even known games for 2017. Don’t make the same mistake I did, Hob is definitely worth playing and a huge surprise.