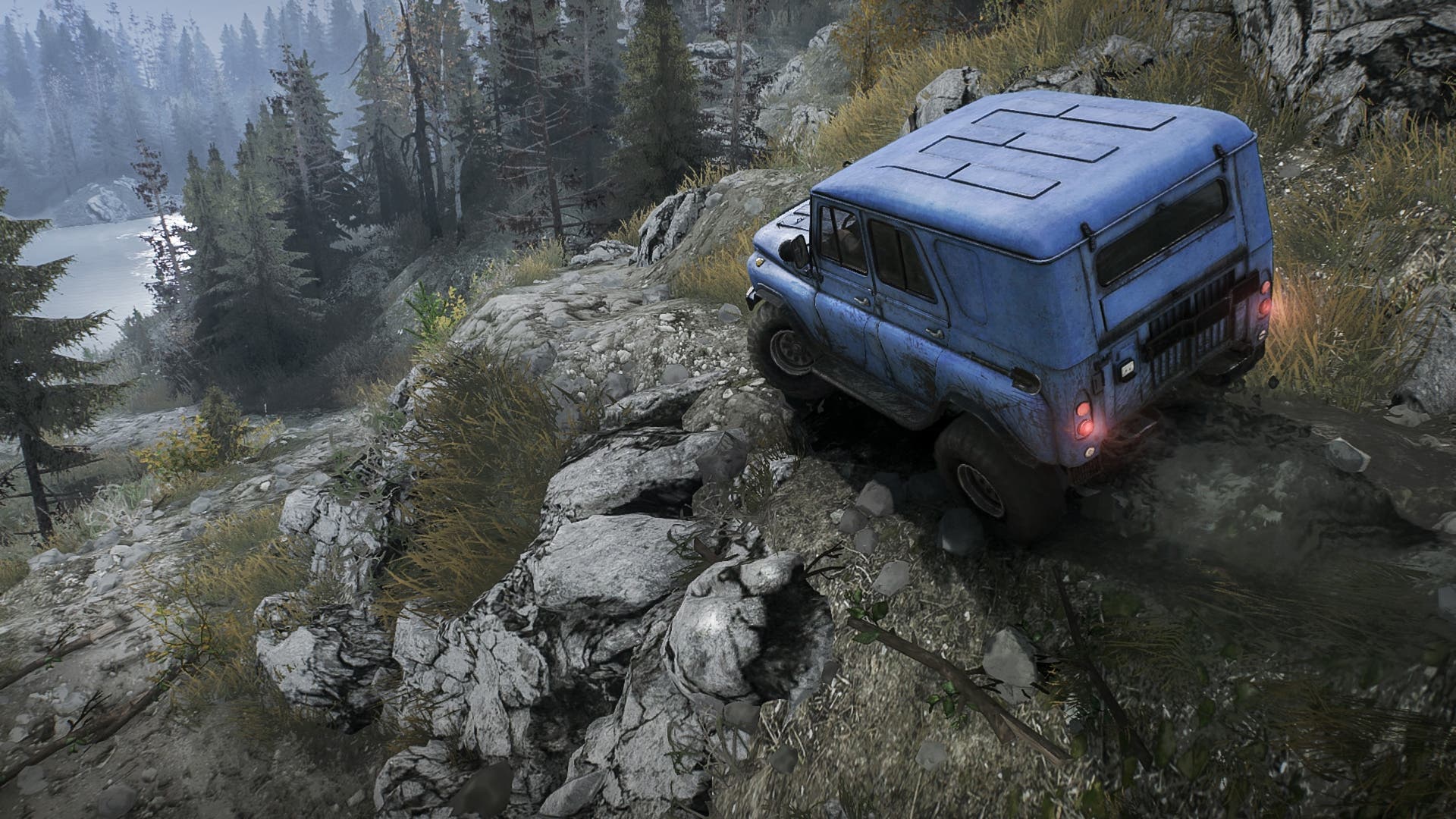 Spintires: MudRunner (or as the game’s logo would have you believe: MudRunner: a Spintires Game) is the re-release of the 2014 original with improvements and expanded onto consoles. Now helmed by Saber Interactive and Focus Home Interactive, the game shows interest in progressing the series, but still is too niche to recommend fully. The updates and improvements to the game are noteworthy, but the frustrations I had years ago remain. The core experience of sloshing through mud is interesting and fun, until it isn’t. Taking over publishing duties from IMGN.PRO is Focus Home Interactive. The game is now on PlayStation 4, Xbox One, and again on PC. I liked the first one, and found myself playing co-op more than I thought I would post-review, but it was still a bear to play, even among friends who could bail you out of sticky situations. Getting back to the terra semi-firma of Spintires felt pretty natural, and seeing everything in motion is rather impressive. Returning are the sandbox levels. With only one new map being added to the mix, gives the game six sandbox levels to explore. Here, this is where you learn how to navigate different types of terrain with different vehicles. As you uncover the map by exploring it, you’ll unlock vehicles along the way (19 in total) – provided you don’t get them stuck as you make your way through the muck.

To alleviate the feeling of it being a glorified tech demo, there are now challenges that have been added to the game. This gives the game purpose and focus over its aimless sandbox. It seems those who worked on this game read my review of the original, because now there’s a cockpit view. For a game so focused on simulation, I had found it an odd omission. Graphically, Spintires: MudRunner does looks better, but the options are relegated to sliders that say “CPU” and “GPU”, for physics and graphics, respectively. Though, there’s no indication what they actually do or what you’re increasing or not. Some more finite detailed control here would go a long way. While I didn’t think it would work, the gamepad controls for the game work quite nicely, and are smooth. The parts in which you go into “Advanced Mode” to activate winches and other components of the vehicle you’re driving are intuitive. No matter the controls, the terrain is the main antagonist you will face, as well as your own patience. Challenges were often exactly what the mode described, but having to reverse park a trailer into a precise position was more work than it is worth. Because if you don’t get it right the first, second, or fourteenth time (you won’t), then you’ll dig yourself into a hole you can’t get out of.

I didn’t get to experience any multiplayer prior to release due to no one being online at the same time as me, but it is there for online co-op. New to the game is mods, which will be a day one update, adding the modding tool converter. This allows players to convert mods originally created for Spintires to be compatible with Spintires: MudRunner – which is such a smart and necessary feature to bridge the gap between both games, and help merge the communities.

I found Spintires: MudRunner to be an improvement over the original, but not enough to come fully recommended. The physics and simulation that goes into the game puts Euro Truck Simulator 2 to shame. It does seem that Saber Interactive really went through the list of complaints, even adding a model of a driver to the barren cockpits of the prior game. But it seems no matter the improvements, the game is only as good as much as you enjoy the challenge and desire to make it to your destination – if the terrain lets you.