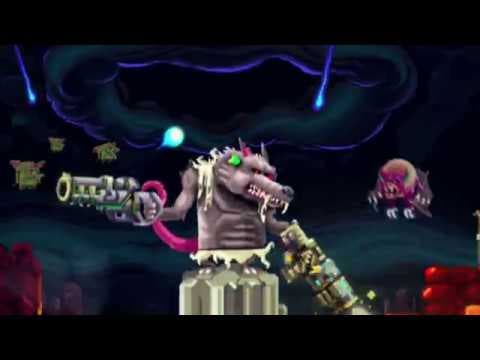 Publisher Grindstone and developer Volcanicc today announced that their gun-toting, roguelike dungeon crawler, Hellmut: The Badass from Hell, is set to launch on Steam for PC and consoles in early 2018. Hellmut sends players through randomly generated dungeons to ruthlessly slaughter hordes of hideous demons, using absurd Transformations, that grant special abilities. By looting valuable treasures and soul stones, as well as equipping unspeakably powerful weapons, players might just be able to save humanity or, at the very least, themselves.

“We are excited to be publishing Hellmut on Steam, the first project of many to come under Grindstone’s name” said Peter Nagy, CEO of Grindstone. “The Volcanicc team did an awesome job packing Hellmut with everything that makes a dungeon crawler fun – procedurally generated enemies and environments, a wide variety of items and brutal boss fights. It’s all wrapped up in a super intense, skill-based challenge, sure to leave players gasping for breath.”

In Hellmut, players unleash an infernal bullet-storm onto hordes of Demonspawn and savage bosses in a randomly generated environment, collecting their souls, coins and weapons, aiming to perform the sweet ‘demonocide’. In between fast-paced play sessions packed with action, players unlock permanent and temporary Transformations. Command rats as the Rat King, become the mighty spell-caster, Orc Fairy, and summon many more ludicrous monstrosities, each countering different enemies with own brutal play style.

“Hellmut is a game with its tongue firmly in its cheek and a truly hardcore gameplay experience for dungeon crawler fan base. Players looking for a challenge will find it here in spades!”, Chris Bateman, from International Hobo Ltd. “Working with Grindstone has been a pleasure. Peter’s team has a great eye for the indie market, and it’s going to be fascinating to see what other games they sign in the months ahead.”