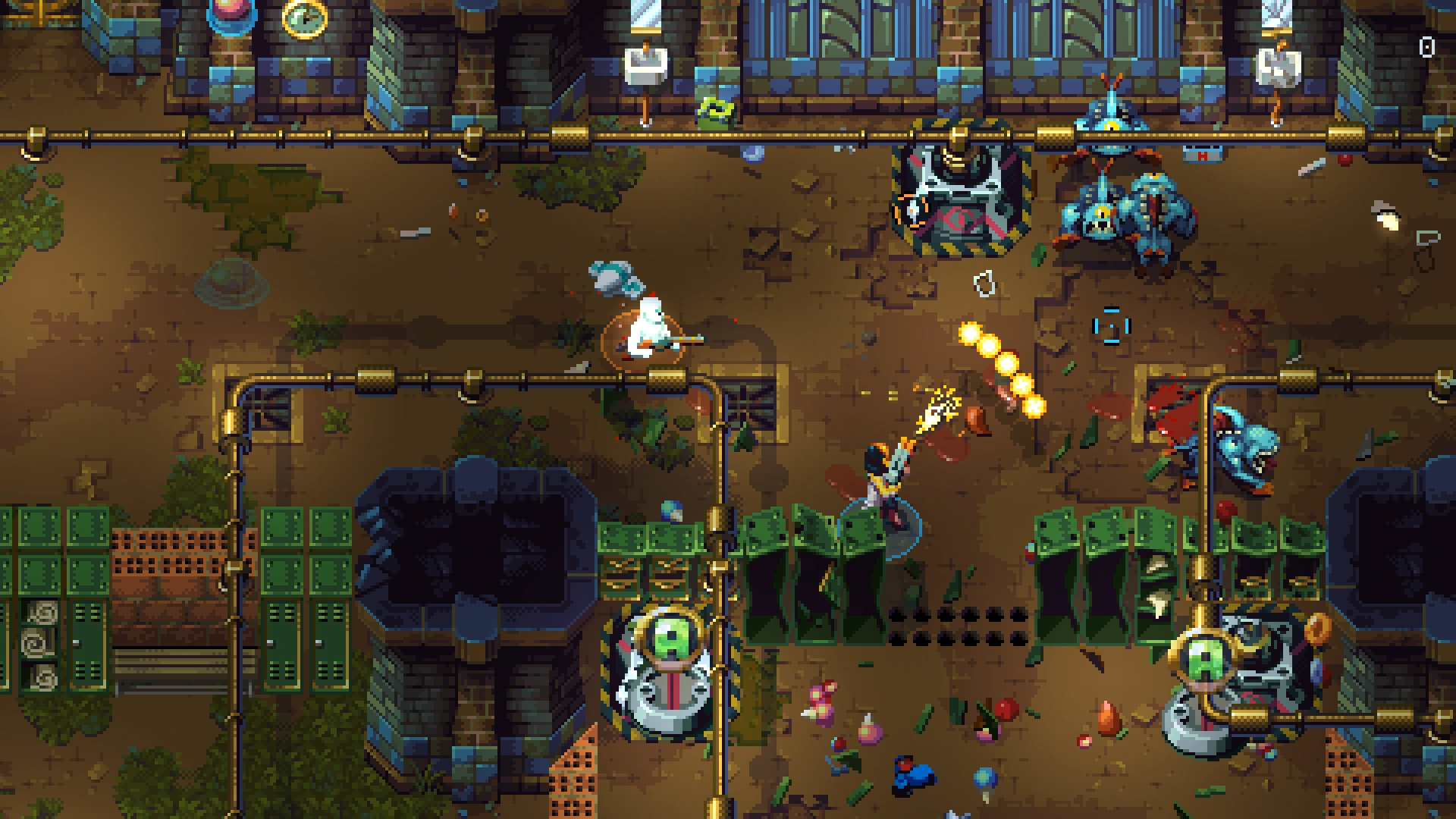 Tower 57's old school approach to twin-stick shooters in the modern era failed to impress as a complete package. Parts of it on their own like the visuals, physics, upgrades, and elemental properties are all really cool, but the core combat and traversal of Tower 57 really ruined the experience. Pixwerk is comprised of two individuals, one a veteran and one newcomer to game development, and there's some really great ideas trapped behind retro ideas. I like what's on offer here, but it comes cautiously recommended.

Tower 57 takes the approach of bringing retro, from the look to the gameplay into the modern day. The game was a success on Kickstarter, but when it couldn’t reach the stretch goals make it onto consoles, 11 bit studios stepped in to make this a reality. Tower 57 is inspired by Amiga games of the past like The Chaos Engine, and Tower 57 is a roguelike that provides destruction, humor, and diesel-punk in some interesting ways – it just doesn’t seem to come together like it should.

The story to Tower 57 is light, but the self-titled place was once a utopia. The megatowers housing civilization have become dilapidated and are in a sad state. Tower 57 is the last bastion of humanity, and is on the edge of an invasion. You assemble a team of three out of six possible agents hailing from the Ministry of Information to repel the impending danger. The characters available to you range from . The Begger who does everything for money, The Diplomat aka Abraham Lincoln who wields a flamethrower, The Don who deals in bullets from his tommy gun, The Spy who hacks their way through levels, and The Officer who can pick-up a minigun. The sixth character I never saw, but each one is entertaining to read about and see in action.

There’s minimal lives to work with, as the three agents you select are the only lives to play through the game with. You cycle through them as they die or by selecting them in a “closet” – this is useful when you want to save a character for later, or repair them. Ammo is also at a scarcity, so you must make each shot count. While Tower 57 feels decidedly retro and old-school, much like a game from the early to mid-90s. It offers lots of details 16-bit games could never do before, making it a game you end up staring and enjoying the visuals for, instead of playing.

Tower 57‘s physical construction is a visual evolution as everything connects. Starting from the train station to sewers to research facilities, and then the penthouse, there’s progression that shows. These levels are hand-made, and not procedurally generated like you’d expect out of the genre today. Nearly everything in Tower 57 is destructible or propagates its properties. For instance, every barrel, box, and pipe can be blown up from your weaponry. Also, fires can spread based on where they start, electricity will travel in water, and so on. The systems at play here are rather impressive.

Each character has a primary, secondary, and super. You can upgrade your weapons and gadgets at strategically placed stations from currency earned from destroying objects and killing enemies. Amusingly, you can lose your arms or legs and still continue. Even your own weapons can work against you by accidentally blow half your body off. So if you lose your legs, you just crawl around and repair lost limbs with robotic ones at stations. 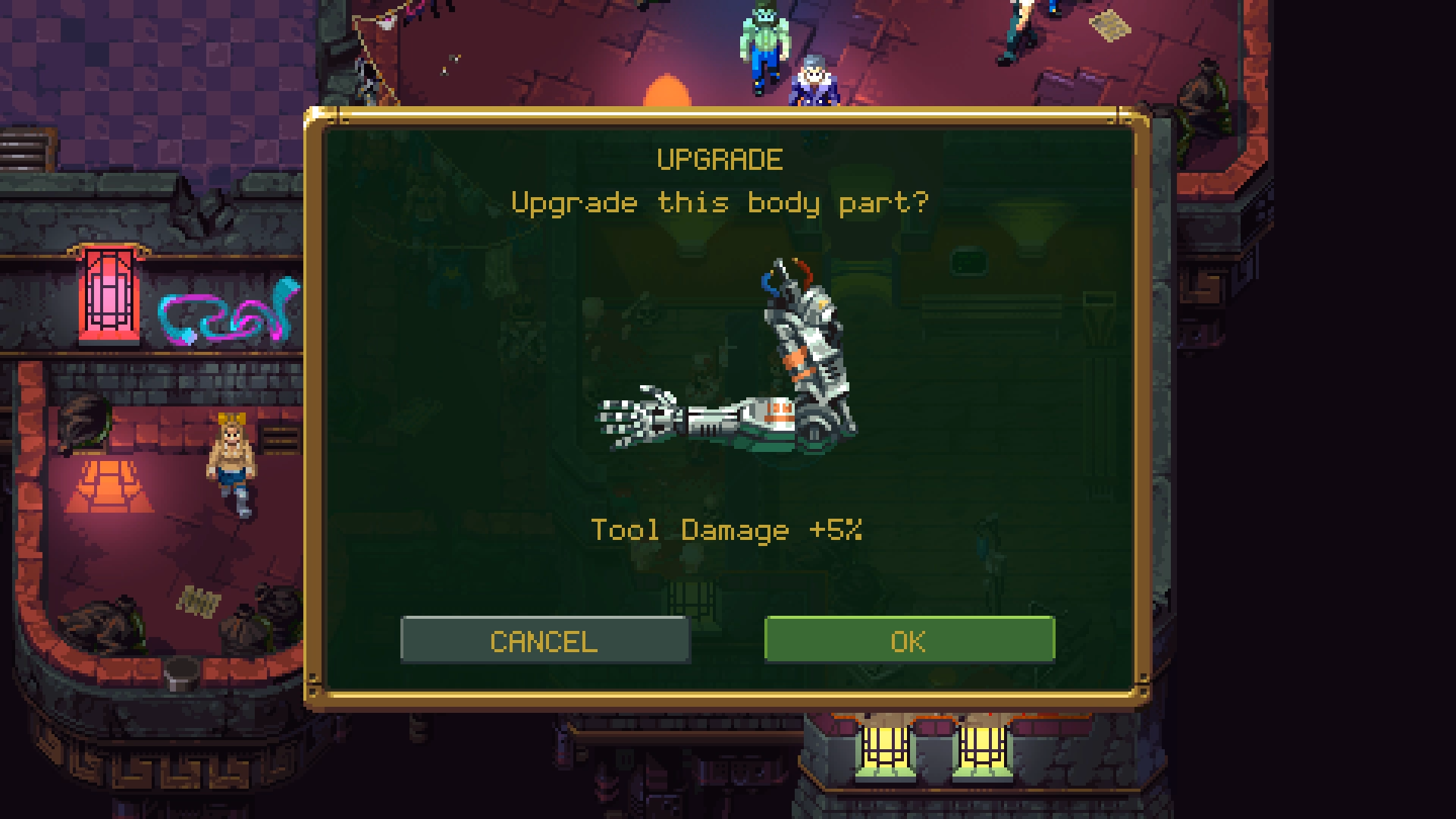 The game markets itself as fast-paced, but I only found it to be moderately paced and mildly frustrating. There’s no jump button, and ledges are one-way step-downs. So if you missed something, you have to loop around. Even with mouse and keyboard, it doesn’t control well and is as a result, I didn’t find it fun to play for lengthy periods of time.

I only played the game in single-player, and I attempted the online co-op but was unable to find a game. The game’s tooltips as it loads encourage co-op, inferring it is the best way to play. Perhaps I’ve missed out by not playing the game this way, as that was the way Amiga games were mostly played. In fact, the developers have got this working on actual Amiga. However, playing it solo, I found its parts more interesting than the whole. 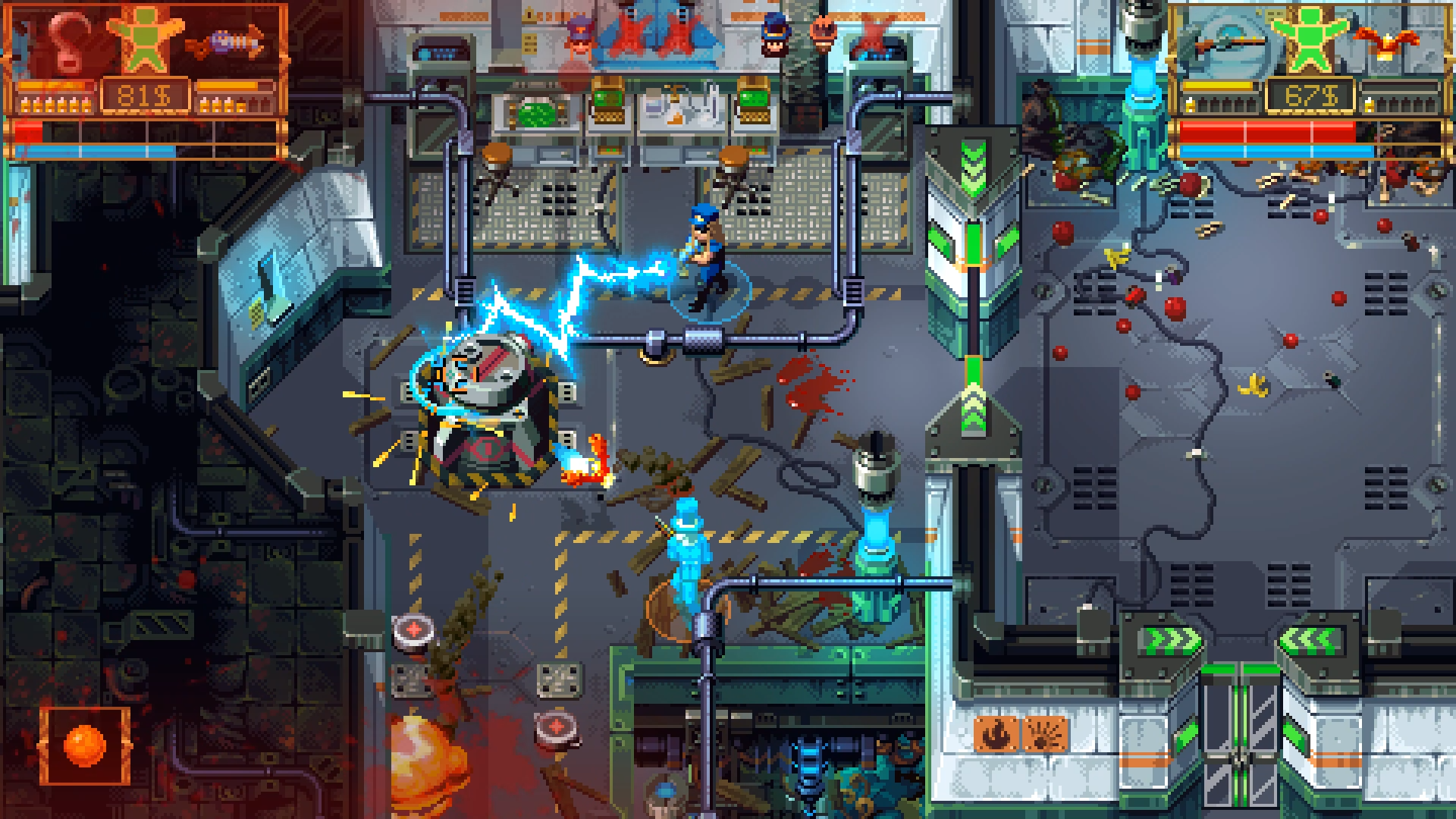 Tower 57‘s old school approach to twin-stick shooters in the modern era failed to impress as a complete package. Parts of it on their own like the visuals, physics, upgrades, and elemental properties are all really cool, but the core combat and traversal of Tower 57 really ruined the experience. Pixwerk is comprised of two individuals, one a veteran and one newcomer to game development, and there’s some really great ideas trapped behind retro ideas. I like what’s on offer here, but it comes cautiously recommended.