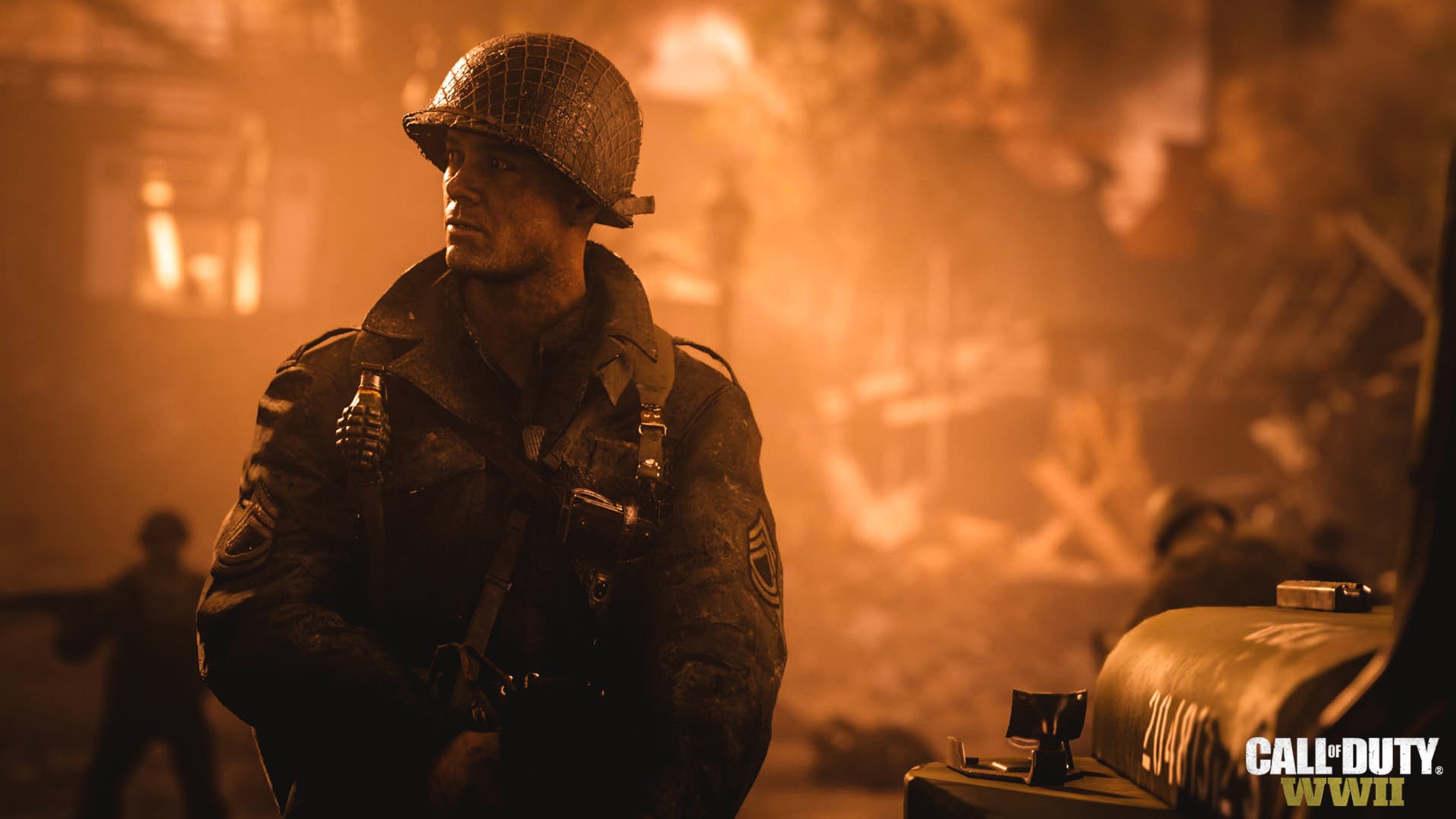 There’s a reason Call of Duty games come out in early November. Surely, financial reasons are one, but mainly because of Veteran’s Day. The game’s origins were in World War II, and has a deep history of showing off the theme of sacrifice. I’ve felt that ever since the series strayed from World War II, “Call of Duty” felt weird for the title of the game when it didn’t exist in that era. Call of Duty: WWII is the return to the era, and more distilled gameplay that slows things down and allows everyone to catch their breath after ten years of the series getting faster and faster. As a package, Call of Duty: WWII falls a bit short, but the campaign is interesting enough and the multiplayer evens the playing field in ways that it has needed for a while. Call of Duty: WWII is rooted in accuracy, and not the fantastical of Treyarch’s World War II games, but more like Infinity Ward’s Call of Duty, Call of Duty: United Offensive, and Call of Duty 2. There’s similarities “Thin Red Line”, “Saving Private Ryan” and “Band of Brothers” that doesn’t feel like it is trying to replicate those, but when the starting mission is the assault on Normandy Beach, you can’t help but feel concern. But it isn’t long after that you see that it is telling a story all its own, even if it is a bit flat and somewhat predictable.

As the characters were revealed, I immediately noticed Josh Duhamel’s face amongst the relative unknowns. While most in-game faces look good, his is done so well comparatively. It’s not distracting really, but I did see him as his real self as opposed to the character, but that faded over time. In the CG cutscenes, there’s a distinct difference from in-engine to pre-rendered. However, most of the other CG in the action scenes are more detailed. 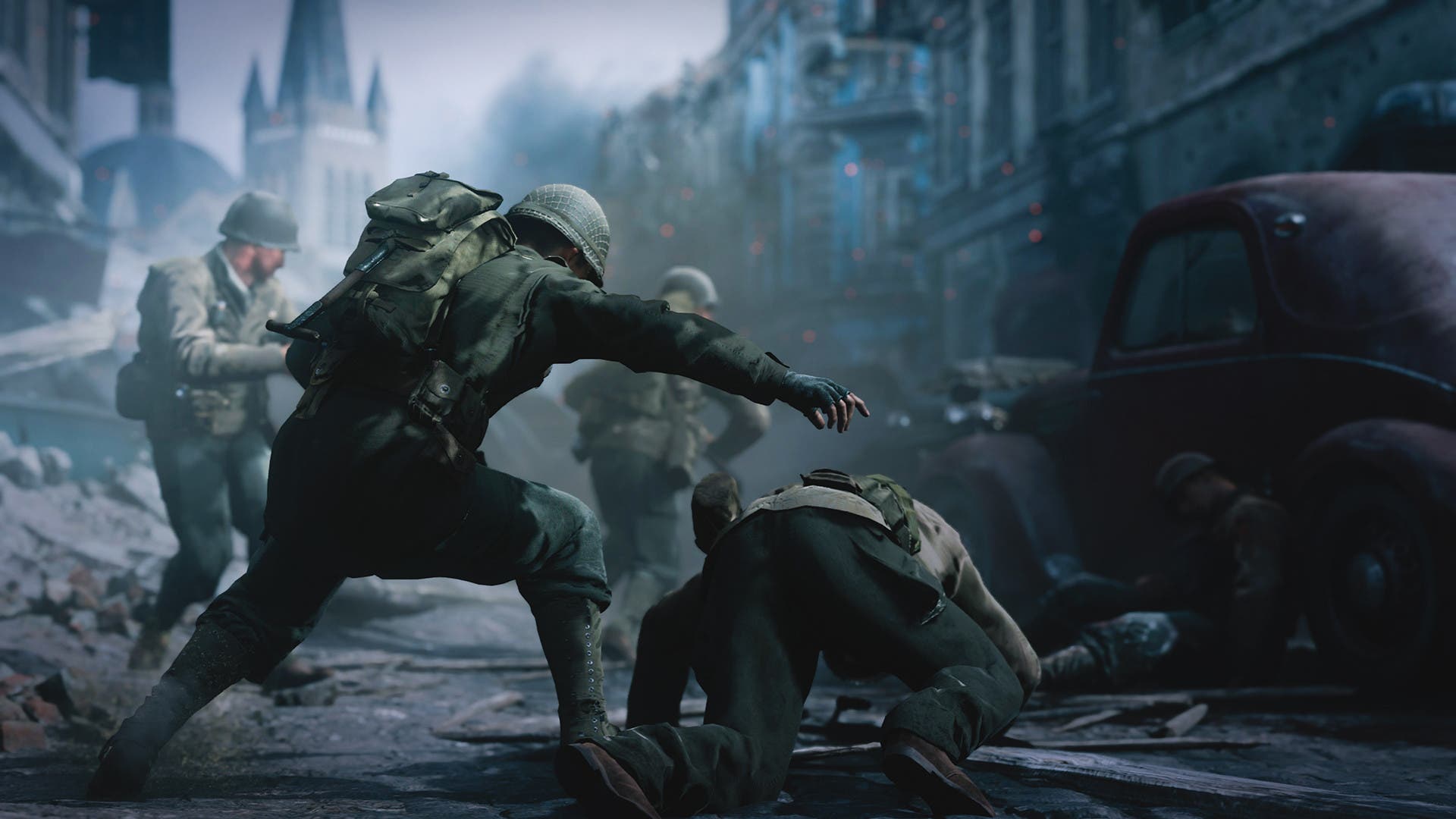 There is more than shooting to Call of Duty, and there’s some surprising moments. While you will often get into a vehicle or turret to do some massive damage, you also get behind the wheel for some simple driving sequences, and most notably: stealth. The stealth missions are also simple, and as a result, not very tense. There’s a desire to maintain stealth and either not kill, or if you do, do it as quiet as possible. At times, soldiers will fall and must be dragged to cover to be saved. You can fail them, and for the most part nothing happens, but sometimes characters will make mention that you could have saved them. They act as a collectible of sorts. There are other collectibles called mementos which are photos or letters, but you’re never feeling like you can ever take your time.

Call of Duty: WWII‘s campaign follows a linear path from Normandy Beach to the Rhine River, with very little deviations. Some of the set-pieces are unbelievable in a way that don’t feel rooted in its historical accuracy that you would think. In playing the game, the campaign length feels short, as some missions seem to go by fast. Hard to say I had “fun”, but the game was intense and filmic. One thing I found problematic was that there was no Stalingrad, or other memorable missions of playing other factions. There’s some interesting story threads that linger and over the course of the 6 hour campaign, do get resolved. The epilogue plays it very safe, going for the happy ending. With World War II being so somber and there being so much less, I do appreciate them going for something uplifting. At times, Call of Duty: WWII feels like a greatest hits of World War II games that have come and gone.

No map in Call of Duty: WWII exemplifies that than the only returning map, Carentan. A staple of Call of Duty 1 and 2 returns in fantastic glory. The layout remains untouched, but looks way more lived in and war-torn that depicted previously. The other maps go to different places. There are 10 maps including Carentan. Also, Ardennes Forest, Gibraltar (seen in the Beta), Gustav Cannon, and USS Texas are the standout maps that offer the most visually appealing and fast-paced action.

There’s a lot going on, even though there’s a simpler game overall. Divisions are the big change here, this determines what bonus you get for being a part of that division is. Airborne gets SMG Suppressor which hides you on the minimap, Infantry gets a Rifle Bayonet which gives you a running charge, Expeditionary: Shotgun incendiary rounds which damage over time, Armored: LMG bipod which offers stability, and Mountain: Sniper Sharpshooter for more focused shots. As you play each loadout which is a part of a division, it also gains ranks and more bonuses unlock. Weapons level up individually of your soldier, and the weapon perks that can be slotted feels out of place. Things like rapid fire increase the rate of fire on the weapons that didn’t happen. However, you’re able to kit out your weapons more to your liking, and helps differentiate the weapon selection in unique ways. You can also customize your characters through dossiers that contain items unlocked from loot crates or leveling up. 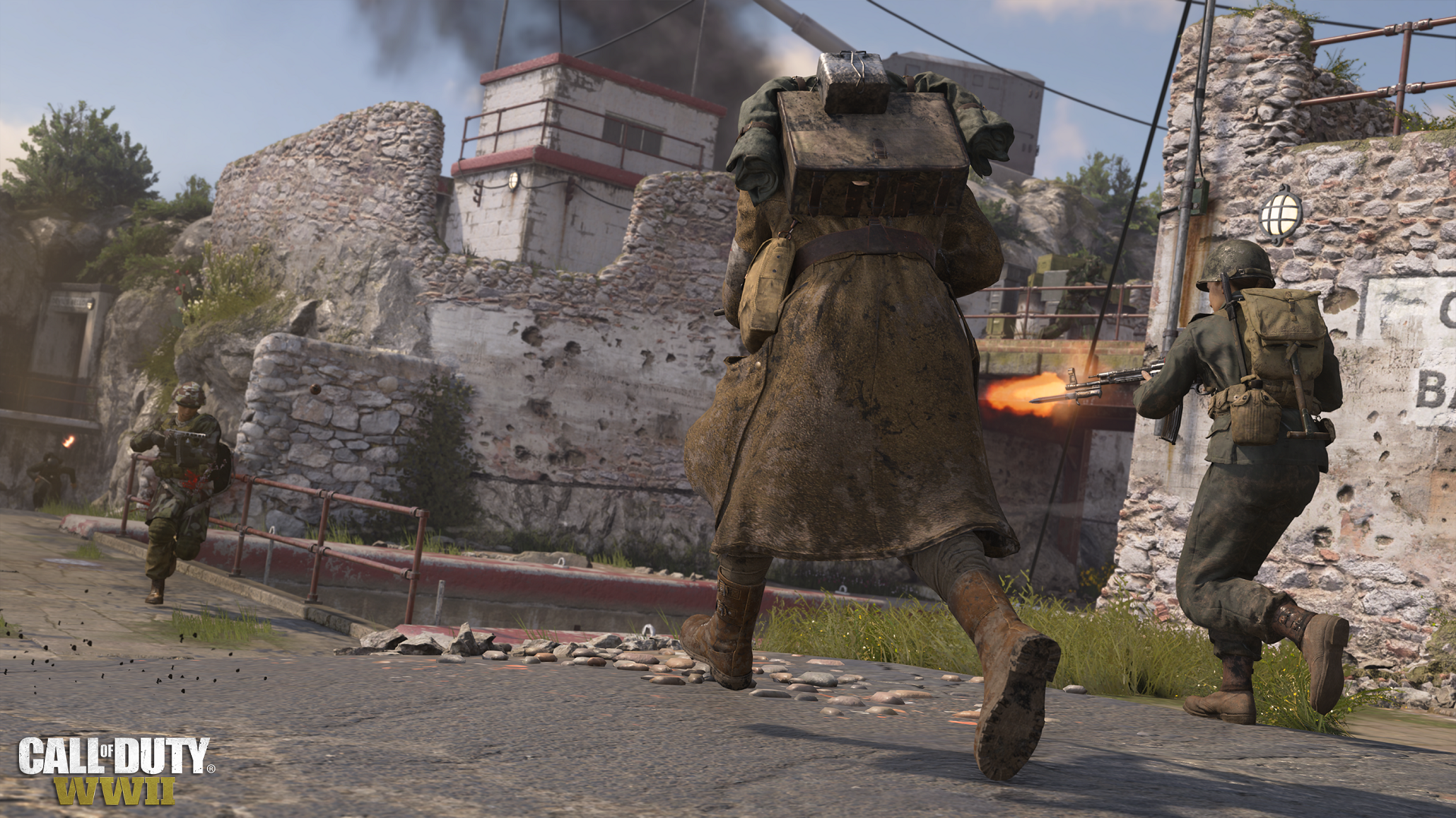 The HQ is like the tower in Destiny, but with less importance. It even contains Orders, which are quests like in Destiny that earn you XP upon completion. I like the idea, but I don’t feel it was fully fleshed out. All of the modes you’d expect out of a Call of Duty game are present, like Team Deathmatch, Domination, Hardpoint, Kill Confirmed, and Gridiron. There’s no Gun Game at this time. New is War mode, which was seen in prior games and plays a lot like Operations in Battlefield 1 by either attacking or defending and pushing towards a goal by completing objectives.

The act of playing Call of Duty: WWII online is really fun and inviting. The game still learns into score-streaks, as opposed the long-retired kill-streaks. While in some modes, people are lone wolves, it’s still nice to see teammates work together like in War mode to push the line or hold the line, depending on the side you’re on. Call of Duty: WWII‘s multiplayer feels like a reset for the series, in a way that doesn’t feel limiting. To be honest, ever since its inception, I hadn’t liked this mode. I’ve always preferred Modern Warfare 2‘s Spec Ops mode. It began taking a more positive turn for me in recent years, especially with the 80s retro aesthetic with last year’s game. This is back to Nazi Zombies, in an episode titled “The Final Reich” with another all-star cast with Ving Rhames, Katheryn Winnick, David Tennant, and Elodie Yung. The prologue leading up to starting an online game is entertaining with its buildup, but doesn’t do a great job at teaching you how will actually need to play, only the very basics.

Upon starting a game with randoms, I was greeted by a journal that would annotate each of the objectives, but wouldn’t tell you where things were. The act of discovery was exciting, and is a game about speed. The faster you complete the objectives, the better chances you have to succeed. As each wave of zombies is cleared, they become stronger and faster in the next. And there’s a lot of objectives to complete, which is also great. I was able to get 23 waves in after 48 minutes, and felt like a lot was accomplished and fun was had. The Zombies mode in Call of Duty: WWII didn’t convert me, but I did find it enjoyable and no where near as convoluted as it used to be. 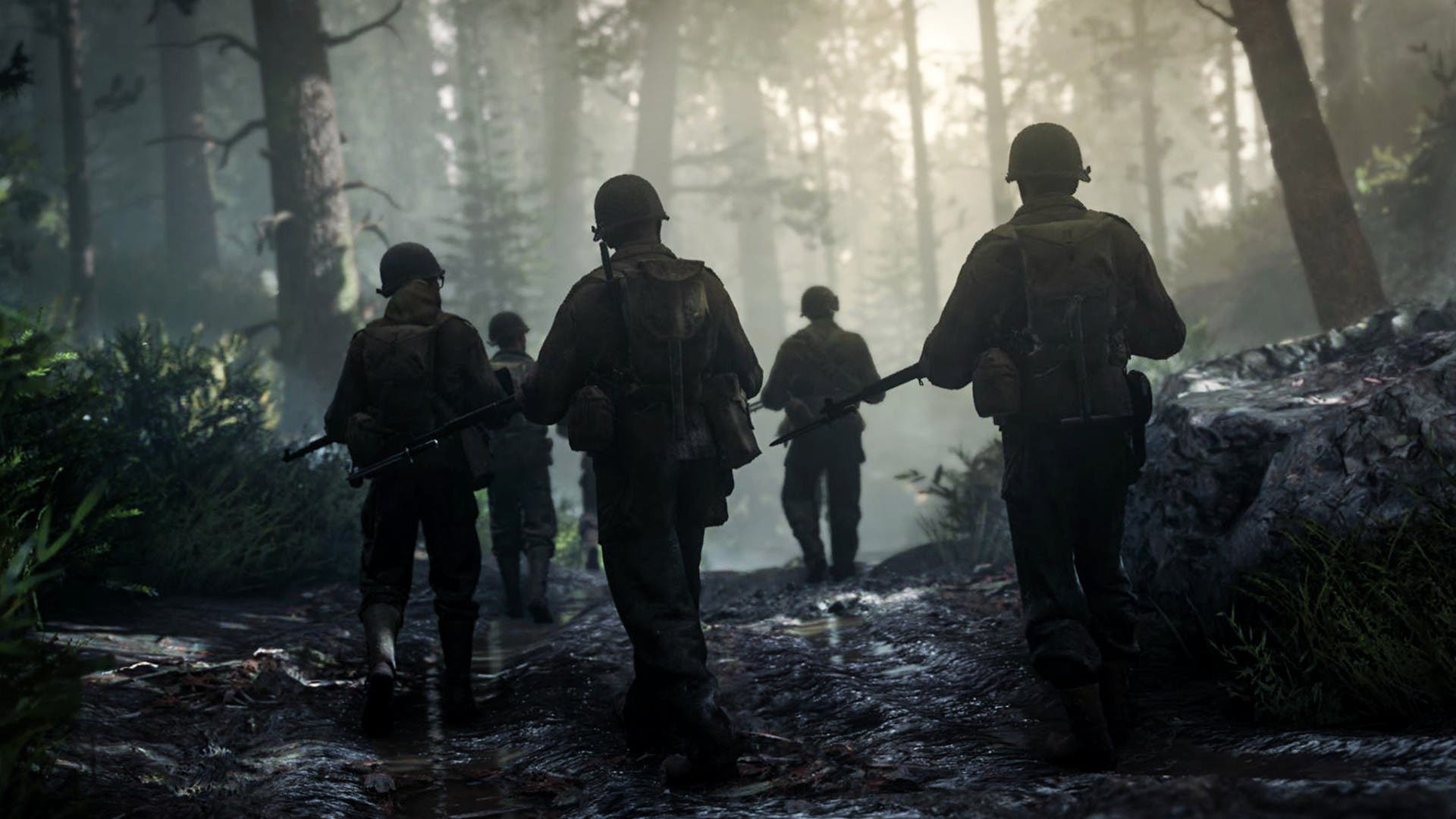 I still enjoyed Call of Duty: WWII, more so the multiplayer over the campaign, but it had its moments that kept me invested throughout. The multiplayer feels “back to basics” like what Modern Warfare Remastered did last year that I really find more appealing. It’s easier to keep track of people and removes a lot of the verticality the latest entries has introduced, for better or worse. Call of Duty: WWII feels like a much-needed reset for the genre-defining series.