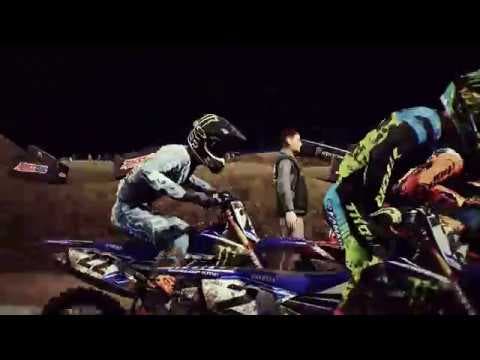 Milestone, one of the leading racing game developers in the world, is pleased to announce the release of a brand-new trailer from Monster Energy Supercross – The Official Videogame offering a sneak-peek of the title.

The trailer is a journey into official content included in the videogame: top racers from both 250SX and 450SX Classes, official bikes and all iconic tracks of the 2017 Monster Energy Supercross Season.

The journey starts at the Angel Stadium in Anaheim, with legendary 450SX athletes like Chad Reed, Cooper Webb, Ryan Dungey, Marvin Musquin and Ken Roczen ready to race for the top of the leaderboard. After dropping the gate in Anaheim, the 250SX East class take to the track at Lucas Oil Stadium in Indianapolis: Adam Cianciarulo comes out of the group, leading the wild bunch against Joey Savargy. While the 450SX class continue their battle in Minneapolis at U.S. Bank Stadium, competitors from 250SX West class race at the University of Phoenix Stadium in Arizona. The Daytona track, in Florida, is the next challenge for 450SX racers with the rainy weather making their battle even more competitive. The competition ends in Las Vegas, at Sam Boyd Stadium, with finalists cutting the finish line. Who’s going to win?

The trailer is just a taste of what can be found in the videogame: Featuring innovative track designs and set inside recognizable and prestigious stadiums, the most competitive and highest-profile off-road motorcycle racing championship in the world comes to life like never before in Monster Energy Supercross – The Official Videogame. Milestone has been working on all aspects of the authentic spirit of the Supercross events combined with deep study of technological techniques to offer a next-level immersive experience to all fans.

Thanks to the use of the Unreal® Engine 4, Milestone has been able to improve the technological standards in all areas of production, from design to graphics, fully recreating the real Supercross atmosphere with pyrotechnical effects, faithful recreation of tracks and stadiums, as well as bikes and athletes’ faces, guaranteeing an incredible visual rendering.

Graphical improvements result in the texturing of the ground and the quality of its details, developed thanks to an enhanced texturing system, as well as in the lighting effects, which makes all weather conditions more realistic.

In terms of technical evolution, the use of new 3D scanning system allowed the dev team to create extra detailed renders of racer’s facial features. The aspects of the athletes were recreated through a structured light 3D scanner, slightly bigger than a classic DSLR, which reads the curves and color of their faces and gives a real-time 3D model, later refined by the artists. Photogrammetry was used to reconstruct 3D mock-ups of all tracks with high accuracy, together with SpiderCams and classic cameras.