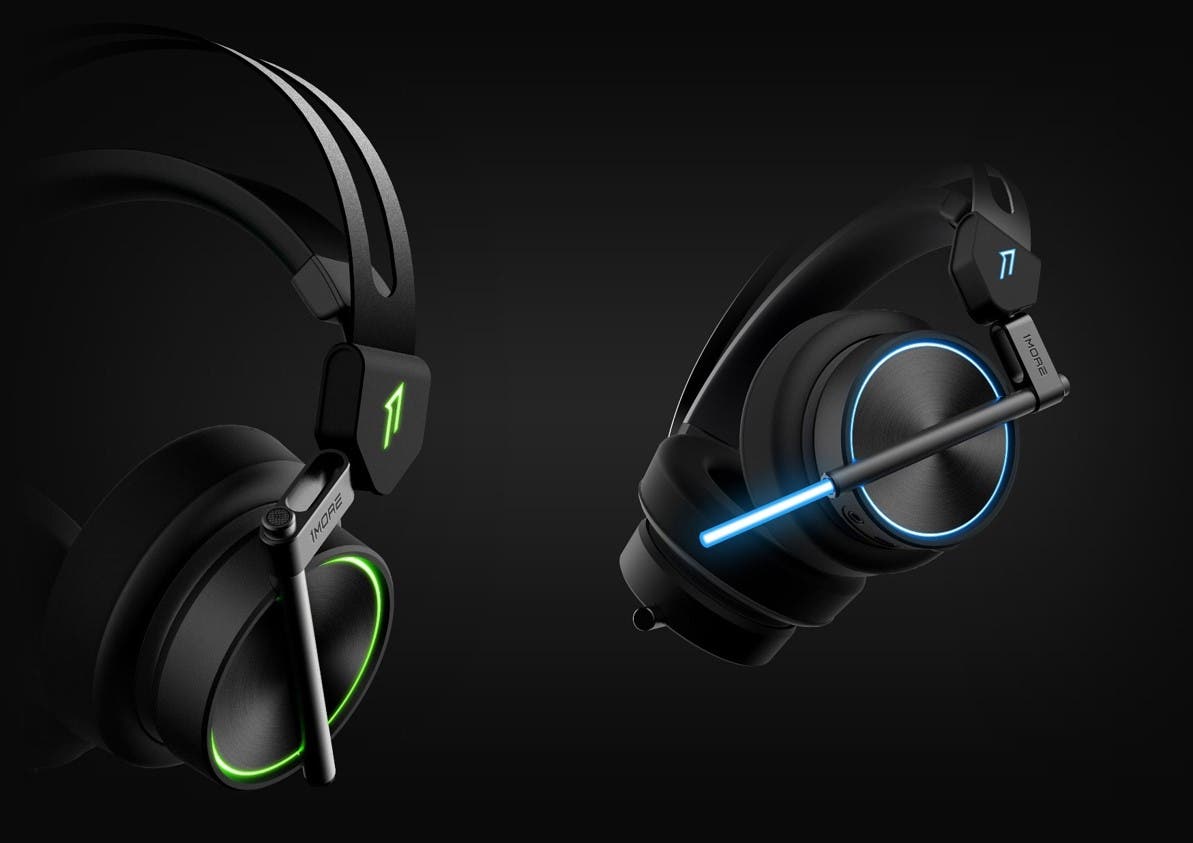 1MORE Spearhead VR Gaming Headphone definitely is more. It’s more than I was expecting, more than a VR headphone, and more of what you want out of a gaming headset. It’s a headset that’s come out of seemingly nowhere that’s impressed me from its hardware to its software. Let’s find out what makes 1MORE’s gaming headphones that makes such a great first and lasting impression. 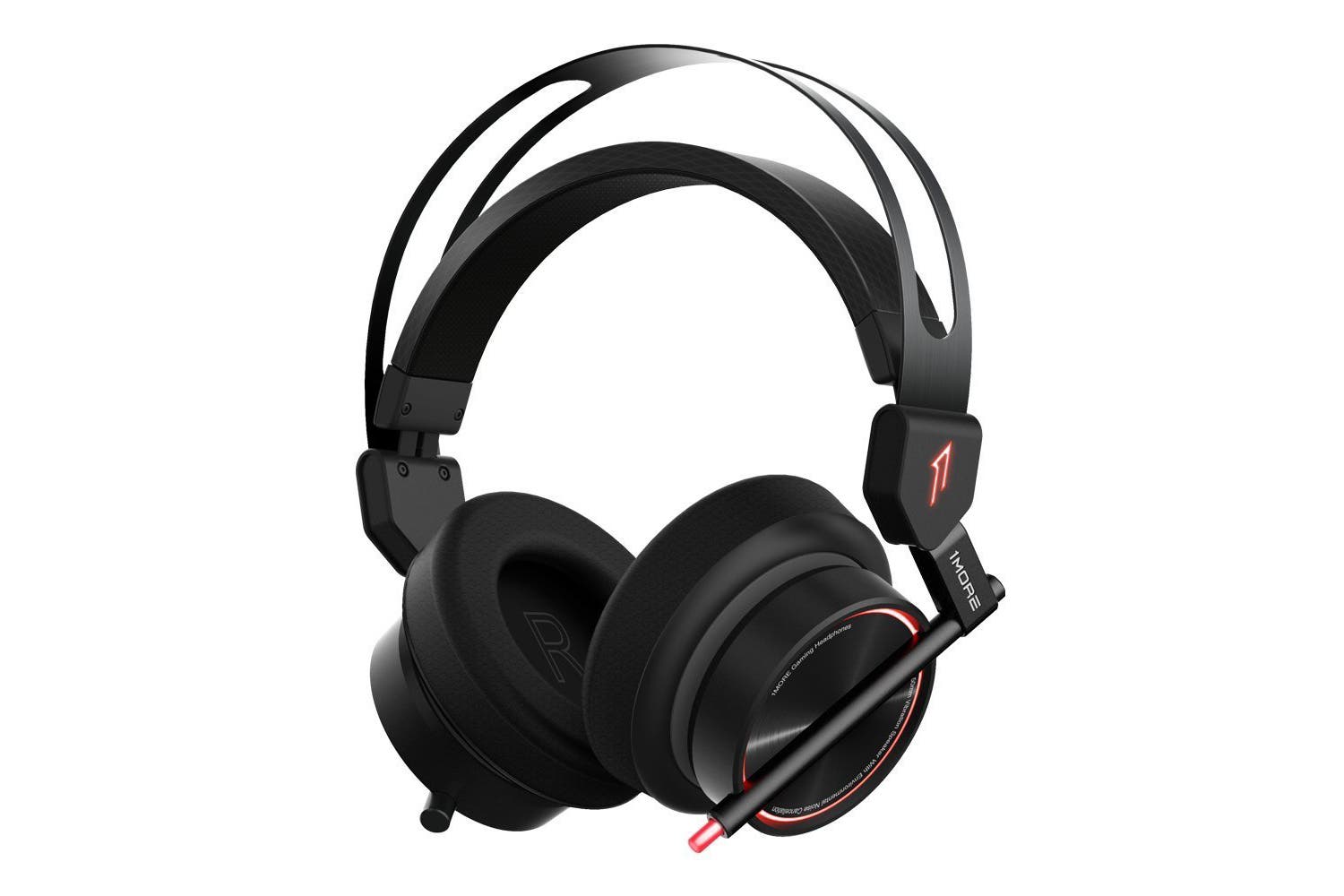 Upon just putting my hands on the packaging, the textured box gave a sense of care for its construction. And opening it up, showed lots of detail in its print and protecting the headphones from any possible shipping. It even comes with a leather carrying case! This, already puts in motion what is to be such an enjoyable experience with 1MORE’s Spreadhead VR Gaming Headphones. The metal-brushed surface has a high-quality look to it. There’s a claim it is fingerprint resistant, but any amount of sweat will leave a mark, but traditionally dry hands will stay true to the statement. The hinges and edges are zinc alloy that makes it easy to move, adjust, and wear around your neck comfortably. The stainless steel frame feels strong and sturdy for excessive use.

There are two ways to connect the 1MORE Spearhead VR Gaming Headphone, either by the 3.5mm headphone jack, or by USB. Both of which are nearly five feet of cabling, which needs to be longer. A full six feet would have done the job for my setup without creating extra slack. It plugged in, and the RGB accent lighting lit up brightly in an impressive way, but not to any guady or obnoxious way, the color and black frames contrast well for a sleek look. Windows installed the default drivers, but a secondary installation of the software is required to get the most out of it.

The software is not overbearing or even resource intensive. The software does great at giving you feedback on your configuration, it shows playback, capture (in my case 96KHz), and if it is using 7.1 audio. As you customize the headset, it gives more information to you. The software also lets you control the LED, which is a singular linked piece of lighting with seven color presets, in addition to the full RGB spectrum to pick an exact color from. It can display a constant color, or in a breathe or heartbeat pattern. It does not do rainbow or cycling, unfortunately – but that’s a small issue. When plugged in, you see what you think are a basic set of volume controls, but it is anything but. Right-click the headphones and microphone space for an incredible set of options to customize and enhance the basic levels of this headset.

The headset volume controls the master volume and left/right balance. Right-clicking reveals the ability to change the sample rate, or adjust the equalizer, calibrate for surround sound. Some “Xear” customizable settings are possible. First, there’s Xear Audio Brilliant which provides crisper audio. Xear Dynamic Bass will automatically adjust the bass based on the content of the audio coming through. Xear Smart Volume will automatically adjust the volume to normalize the audio from different and same media content. Xear Voice Clarity works to ensure you’re hearing the best voice chat during gaming sessions. Surround Max, maximizes the surround sound capabilities of the headset (beyond its calibration). Putting these things to use give it the versatility of a home theater system in a headset.

The microphone volume control seems basic, but it too has a right-click offering that lets you change the sample rate. And as far as microphones go, not much else. The big feature here is the environmental noise cancellation which works to remove any extraneous noise from bleeding into the microphone, and only relay your voice. Finally, there is a voice change by the name of Magic Voice which is essentially low-pitch, high-pitch, man, and woman sounding voices. The fact it has any of this at all is so above and beyond normal software options.

The microphone is cool, as it casually slides in and out of a port. I find this to be backwards, but rather standard: when the mic is off, the light is on and when the mic is on, the light is off. I never understood that. The 50mm Maglev Graphene Driver provide high-quality audio. Putting the headset on, the inlets are marked with “L” and “R” so you know which way you should have them on. The on headset volume control ties in with Windows (when using USB) and is great to see it in an on-screen display. This headset, for all intents and purposes is very loud.

1MORE has made an impressive headset with the Spearhead VR Gaming Headphone. I find the naming of this headset to undersell its offerings. It has 7.1 channel surround sound, durability, comfort, general usability beyond VR. The means in which you can enhance the headset’s audio profile is astounding. This is the very definition of a hidden gem. For the pricing and offering of it’s clean and crisp audio, you can do no better in regular PC gaming, or in VR.

A hardware unit was provided by the 1MORE for review purposes