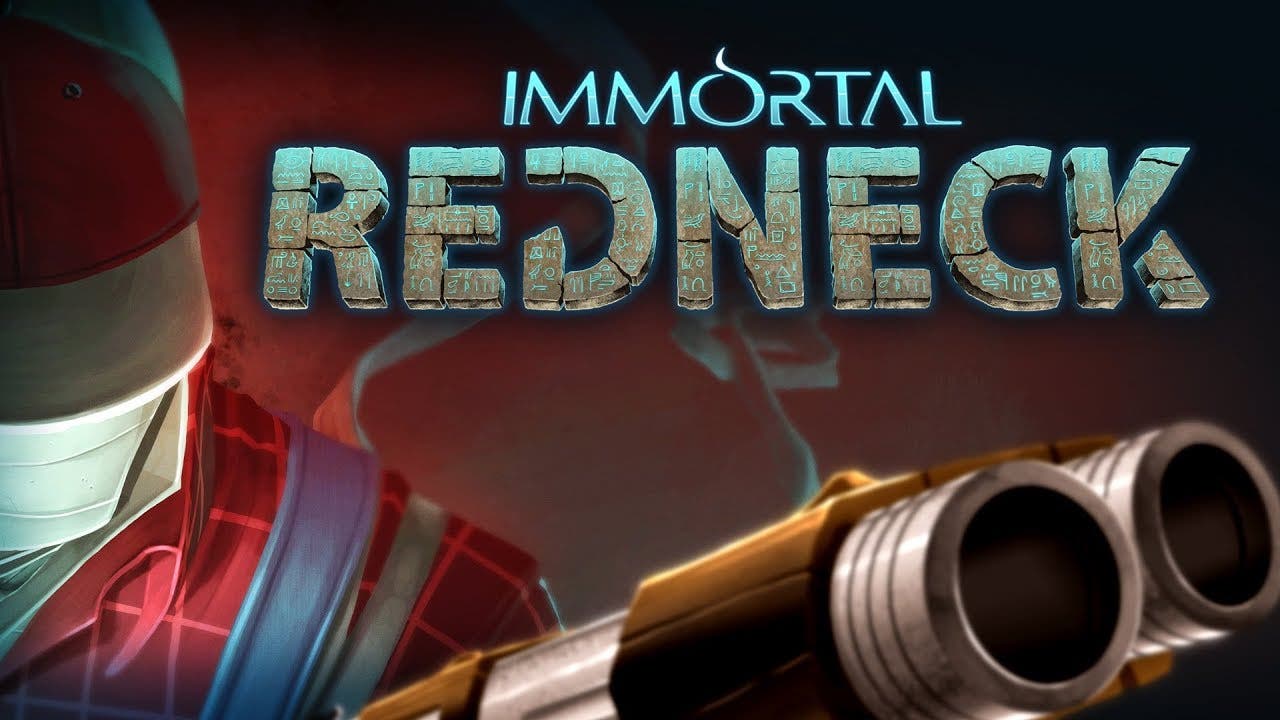 Immortal Redneck, the Egyptian-themed first-person shooter with roguelike elements, will rocket onto Xbox One and PlayStation 4 with PlayStation 4 Pro-enhanced graphics and framerate on Feb. 27, 2018. A Nintendo Switch version is also planned for a Q1 2018 release.

When our titular Redneck wrecks his dune buggy in the sun-bleached sands of Egypt, he wakes to find himself mummified. Now he’s got a hankerin’ to find out who wrapped him up, and old-school arcade first-person shooting, a healthy arsenal, and the blessings of ancient gods are the only boons on his quest.

The Redneck’s answers lie in the Great Pyramids of Giza. These ancient wonders are protected by an army of monsters that can send our hillbilly back to the grave and restructure the pyramids’ labyrinthine halls. Players can attempt to uncover the secrets of the pyramids through the standard mode, or try to best their own personal record in the Infinite Tower mode, where endless floors await.

The Redneck will have to frantically blast, circle strafe, and bunny-hop around Egyptian warriors and sarcophagi, and he’s going to have fun doing it. Except for when he dies…again. And again. But a silly little thing like death is not the end in Immortal Redneck. With the power of resurrection, gold earned in one life can be used to unlock permanent upgrades from a persistent skill tree, such as health and damage bonuses, or new favors from the gods.

With more than 50 weapons to find, ranging from traditional to futuristic and fantastical, no run plays quite like the next. Each attempt is further shaken up by over 100 Scroll Modifiers that enemies drop that can help or harm in various degrees. Players might find a Metamorphosis Scroll with a chance to turn opponents into chickens, or the Sorry, Not Sorry scroll that swaps out all weapons for random new ones.

Each of the nine favors from the gods provides the Redneck with different starting weapons and abilities. Seth, the God of Storms, begins with a Taser Sword, Tesla Coil, and Electric Flamethrower, which allow him to throw electric balls as his active ability. Neith, the Goddess of Hunting, can send a falcon to attack her enemies while also using a Sniper Rifle and Tranquilizer Gun. It doesn’t hurt to have a god on your side when mummies need a beating.

“Immortal Redneck has been a wonderful success on Steam and we look forward to bringing the fun to consoles,” said Guillermo Andrades, Co-Founder, Crema. “Look out for our fusion of classic FPS and roguelike when it hits PS4 and Xbox next February, with the Nintendo Switch port following closely behind.”