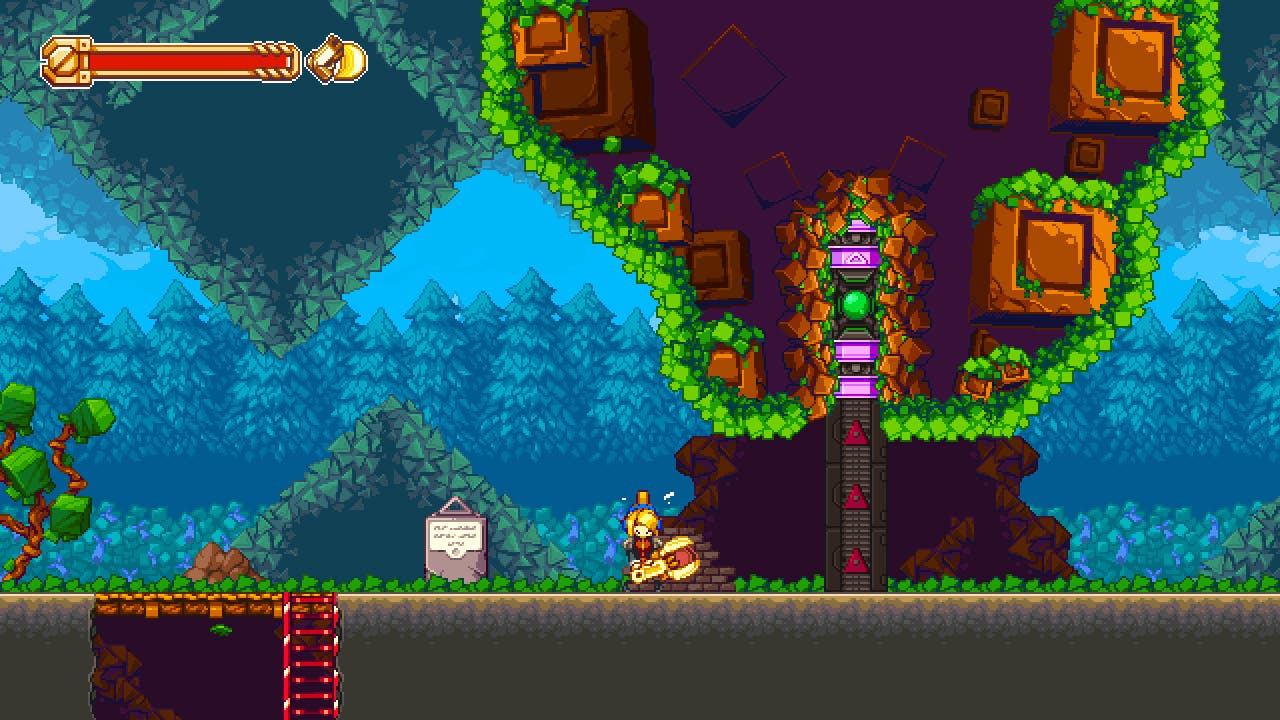 A person who attacks cherished beliefs or institutions is known as an Iconoclast. And in Iconoclasts there are many, and they are seen as rebellious, and of dissent. However, they are fighting for what’s right. There’s more going on than you’re led to believe, and is really satisfying from a gameplay and narrative sense, and with its impeccable visuals and complimentary soundtrack, makes the game so easy to recommend. 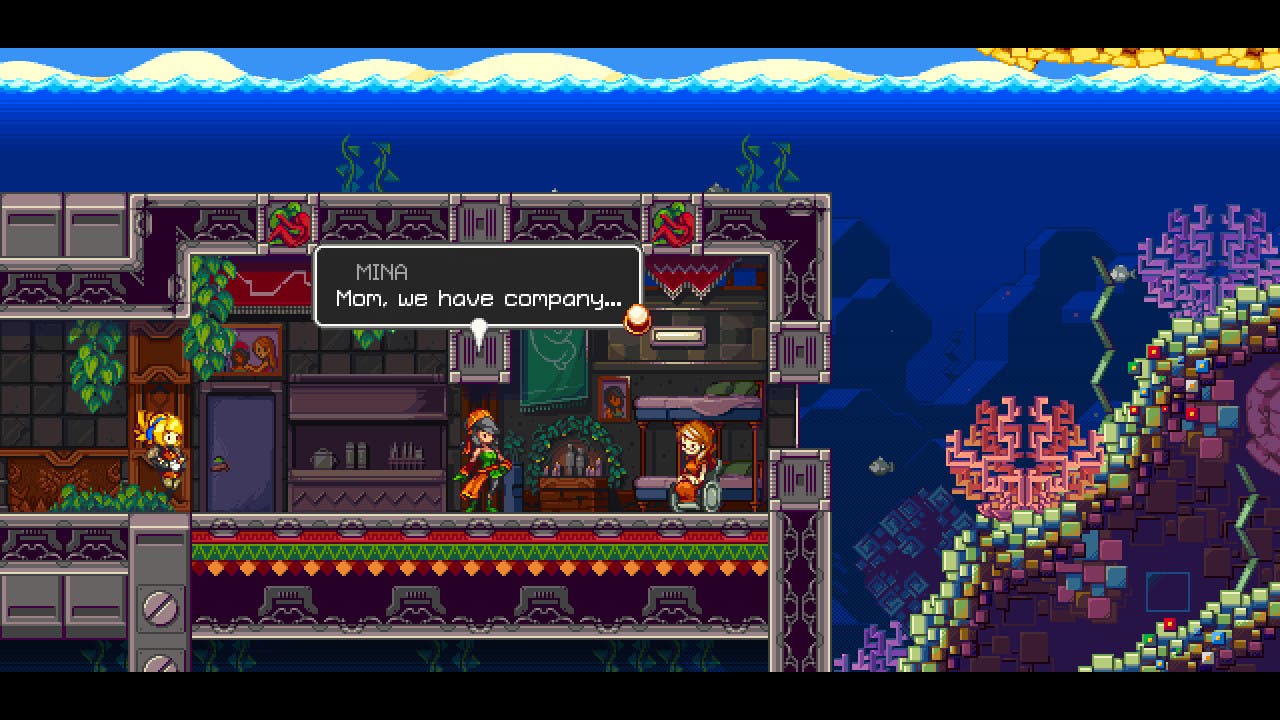 The game opens up with you meeting Robin, the 17 year old daughter of a mechanic, who has picked up her father’s wrench as her own. She secretly repairs anything that needs fixing in Settlement 17, where she resides. You see, in the world of Iconoclasts, wrenches and all mechanic labor is outlawed. Anyone caught performing an act such as this is immediately incarcerated. It seems a bit absurd, but that’s exactly how absurd this world is. It’s not long before you meet Agent Black and Agent White of One Concern, a religious corporation. Black and White are a wink and nod that this is how things are seen, and shows that shades of grey are not allowed or tolerated. Eventually, you break free and begin your quest to flip things on their head.

Iconoclasts closely resembles a Metroidvania, but it’s so much more than that. From a gameplay and structure point of view, sure. But it has a story, dialogue, and even choices. These are the things set it apart from its contemporaries in meaningful ways. Iconoclasts is a mostly linear affair. It is open for exploration and backtracking as wanted, but it isn’t needed. With its 10-12 campaign, New Game+ and Challenge Modes will tide you over in getting the most mileage on what Iconoclasts has to offer. 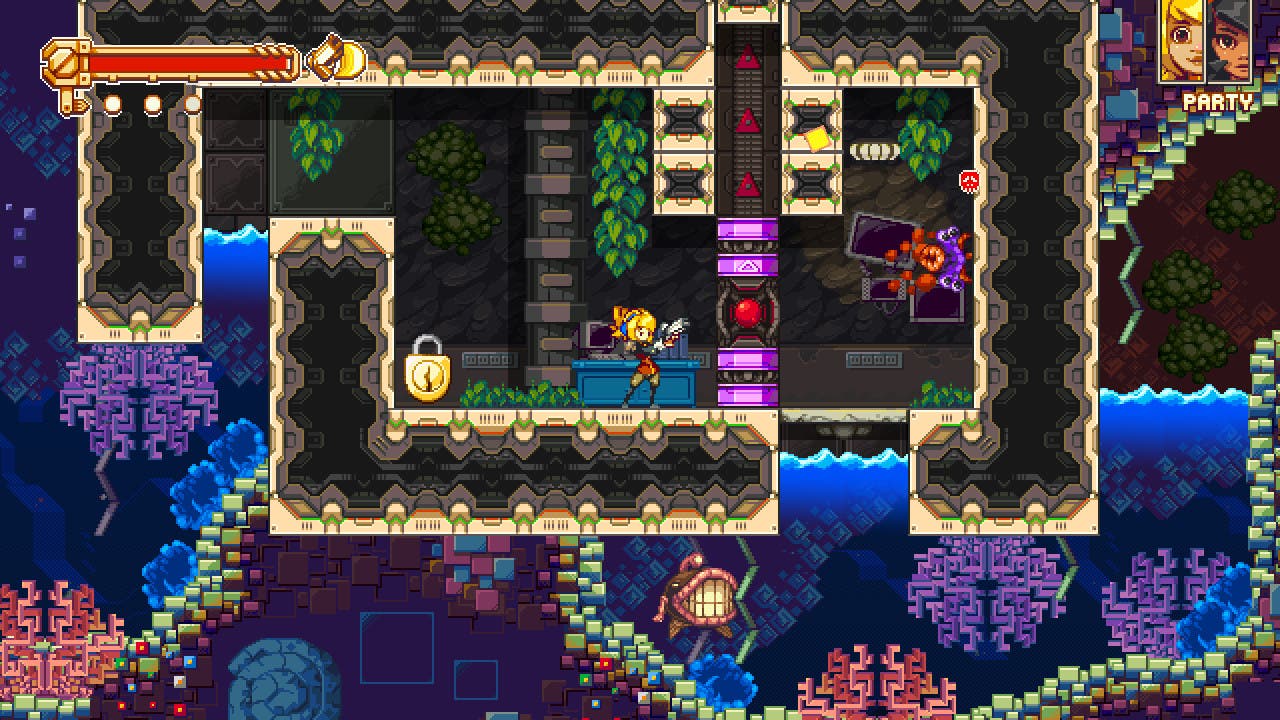 The crux of the gameplay will be turning your wrench to open timed or not-timed doors and shooting your blaster. The shooting is quite possibly the best implementation of it in a 2D sidescroller whereby enemies who are above or below your aiming point, the game will automatically aim towards those targets. This is good because you don’t have to spend time trying to line up a shot or perform a jumping shot to do what you want – the game just gets it right. While the shooting feels great, jumping feels even better. You have abilities such as a jumping smash attack and explosive charge to get through otherwise impassable areas. The wrench can be swung to parry attacks, but it’s so damn satisfying to do on its own with no one around – it’s my new favorite thing. It’s not long into the game where form a party, and have swappable characters that have vastly different abilities.

To say that Iconoclasts looks excellent is an understatement, it is wonderfully animated with painstaking detail. Every scene of a level exists for a reason and has its place. And exploring each new level was a tour through its world and history. I loved stopping and taking in what was built for me, as you should. 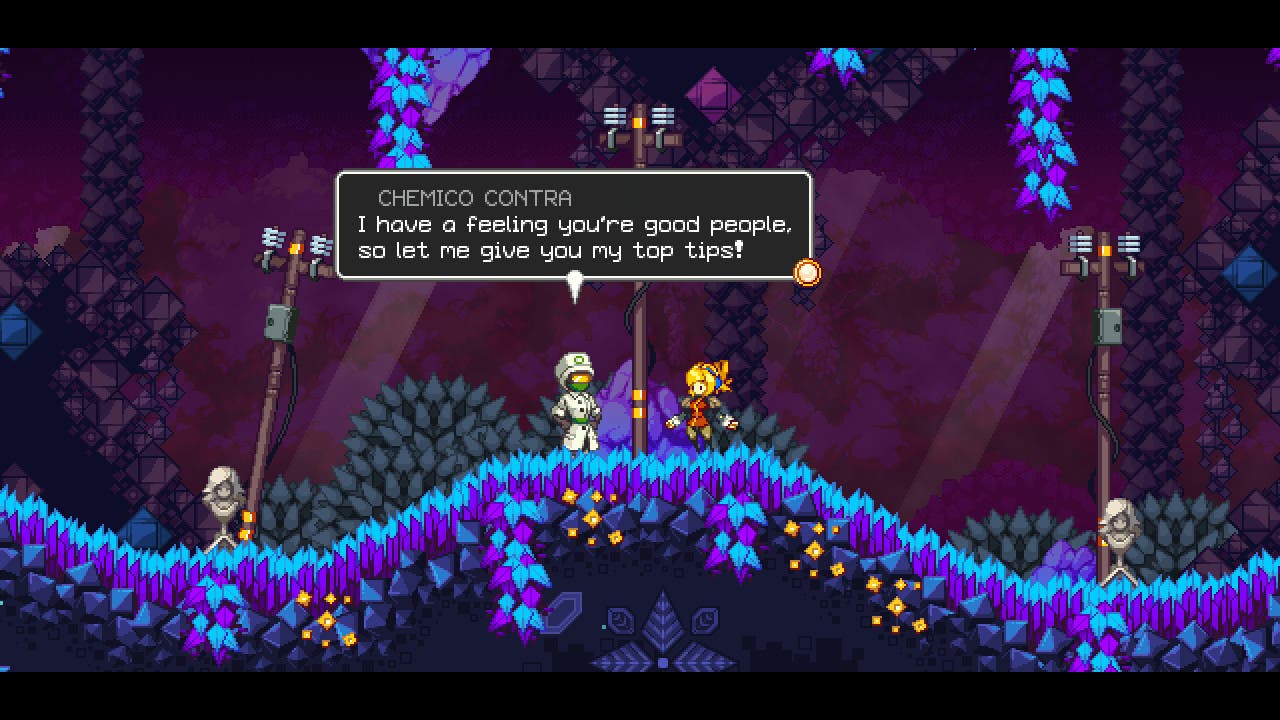 There’s some rather unexpected and unsettling dialogue that Robin overhears and that you read. It’s simply appalling. Though, it’s definitely written in a way to evoke exactly how you feel: disgust and determination to right the wrongs. And so, dialogue drives the objectives, and paying close attention to discussions are needed. There’s even small to large character arcs throughout the game, that makes its dialogue much more interesting than other games of its ilk.

There’s no fluff in Iconoclasts, not in the traditional way. The dialogue and things that are non-combat are essential to understanding the goings on. But when there’s time for combat, the true glory is found in the boss battles, and there is a lot of them. But like the environmental puzzles that come before, being able to figure out the pattern or key to defeating them is so rewarding. 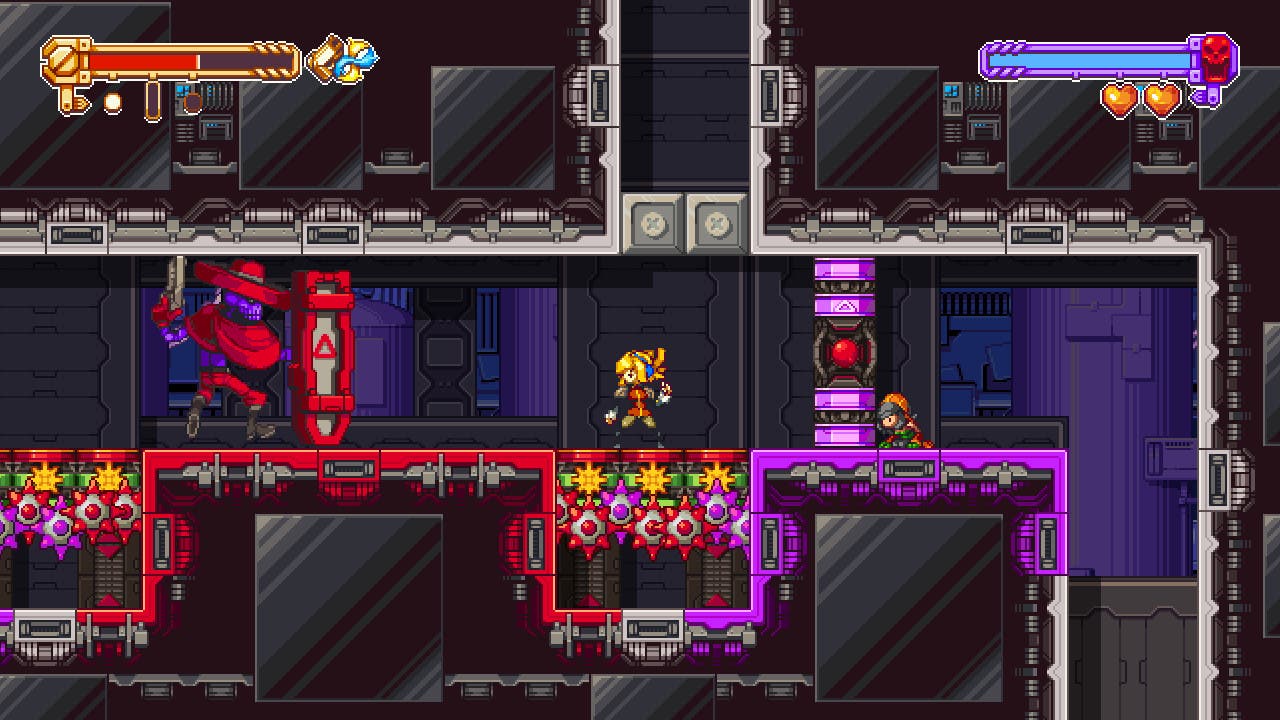 Iconoclasts features a lot of environmental puzzle solving, and sure grabbing and placing boxes is weird, but using your smarts to get yourself through an area is really satisfying. Chests are strewn about the world and are not needed, but when they glimmer and shine behind a (currently) inaccessible room, your brain starts spinning as to figure out how to get in there.

It’s clear that these chests are placed in specific places on the screen to incite curiosity. Now, the chests hold crafting items which let you make tweaks. Tweaks are items you can slot into one of three spots to let you take more hits, hold your breath for longer, or more attack damage with the wrench. As I said, they are wholly unnecessary, but help when things feel to be “too much” with the boss battles, or if you need that tinge of progression. 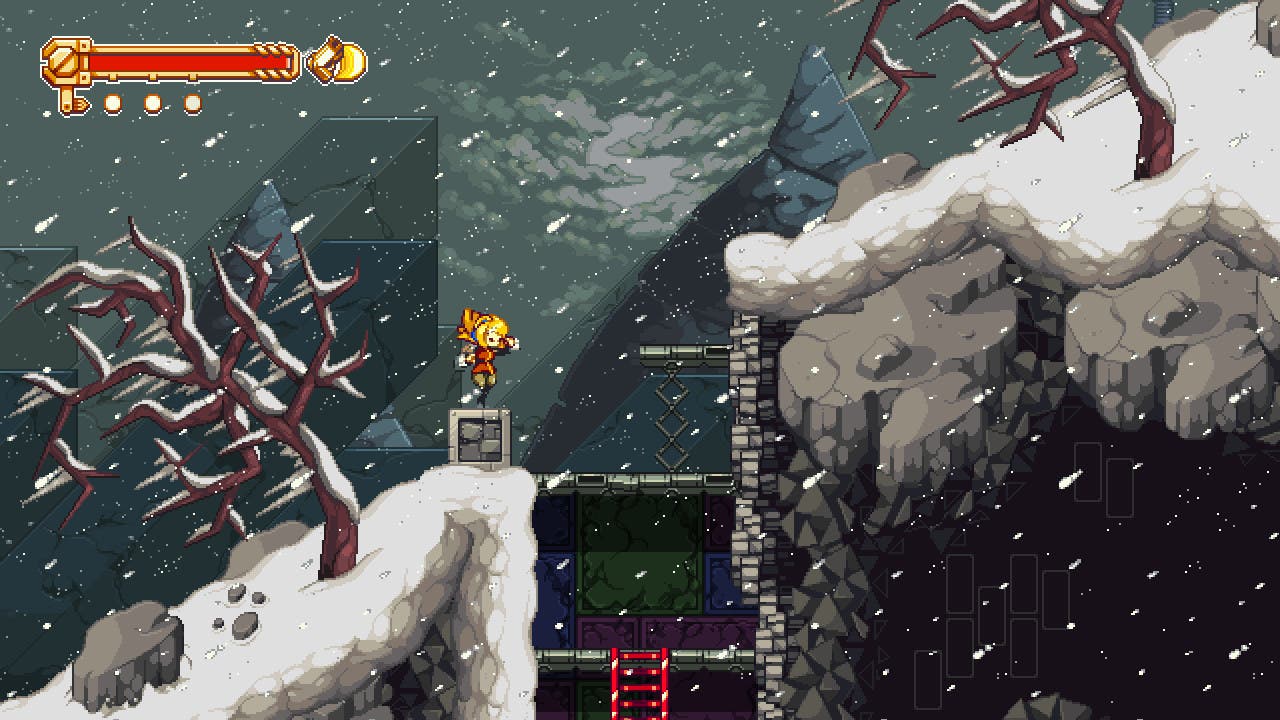 Joakim ‘konjak’ Sandberg’s Iconoclasts is a one person show that’s a decade in the making. And it pays off so incredibly well in ways you wouldn’t expect. It has its frustrations with certain boss battles, but those can be easily looked over when looking at the larger picture. The game released at a time where in our current climate in the games industry and as a people where Robin is what we all want, and need to be. Iconoclasts is a game that defies expectations and norms, and has been worth that wait.