SteamWorld Dig has resurfaced, and it has made its way onto the Nintendo Switch. The game does so, cleanly and wonderfully. By design, SteamWorld Dig is completely unchanged in its transition to the new console, so it is the same game as the other versions in every way. While I would have liked to see new features, touch controls, or enhancements from SteamWorld Dig 2, it just isn’t needed. And even though there’s nothing new to be found here, what’s here is a tightly packed game that put Image & Form on the map. SteamWorld Dig is a treasure all its own. 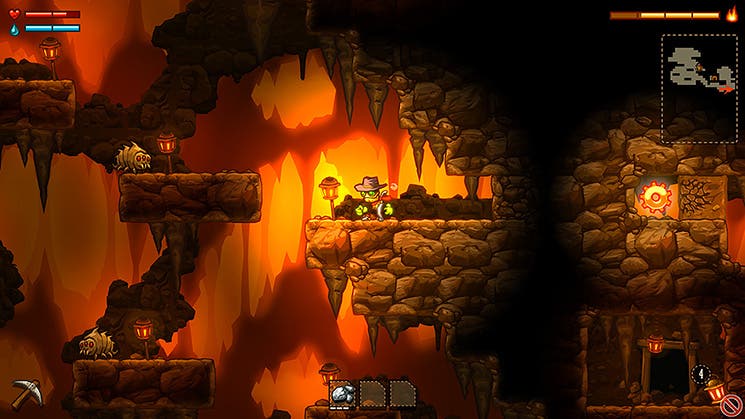 The game starts off with a robot named Rusty looking for his Uncle Joe. It’s not long after you come to his last known location of Tumbleton, that you discover his deceased body and take his pickaxe as your own to continue where he left off. You see, there’s mysteries that need to be unearthed below this sleepy town. From there you’ll set off on your short 4-5 hours journey to discovering what’s really going on deep down.

Dorothy is one of the first citizens you encounter (foreshadowing her being the protagonist in SteamWorld Dig 2 where she’s the one looking for a missing Rusty). You’ll frequent Dorothy as she’s a shop owner and will give you cash 4 gold. As you fill up your sacks, you’ll head to the surface to sell. But then you have to get back down to where you were, and repeat the process. A way of making this easier on yourself is to not dig straight down everywhere but something like zig-zag patterns or means that don’t let you fall too far so that you hurt or kill yourself from the fall damage. There are fast travel points such as specific pneumatic tubes or teleporters you purchase that can alleviate some of this headache. Digging becomes more monotonous the deeper you go down. As the lower depths have harder and denser dirt to dig through. There are upgrades to your pickaxe, but they only improve their effectiveness against enemies and not the dirt. Eventually you come to rocks that can only be gotten through via a drill you get from guided mines. For the bigger, tougher enemies you’ll unlock a drill punch that does massive knockback and damage.

Along the way you’ll have optional items you can bring with you. Your primary resource is light, so bringing lamps with you let you see in the dark trenches of the underground. The second most valuable resource is ladders, as you’re learning the game, you’ll dig yourself too deep and need them to get back up properly where the walljump won’t always help. As part of the guided upgrades you’re given, water becomes a powerful resource to use to drill and do powerful steamjumps. Dynamite becomes valuable in that you can use it for offensive and defensive reasoning, as well as using it to help clear a path in conjunction with well-placed TNT barrels in the lower depths. SteamWorld Dig: A Fistful of Dirt is still a great game, but it is undoubtedly a more compact game than what’s come after this game’s original release. SteamWorld Dig offers little exploration for curiosity as it is usually out of necessity to gather as much ore as you can find to sell for cash to then buy upgrades to make Rusty more effective. If nothing else, SteamWorld Dig serves as a reminder at how much Image & Form learned from this game when making SteamWorld Dig 2 – but thankfully there’s so much more to this game to appreciate. Whether you’ve played this before or not, Image & Form make beautiful looking, sounding, and playing games that deserve to have a place in your library.