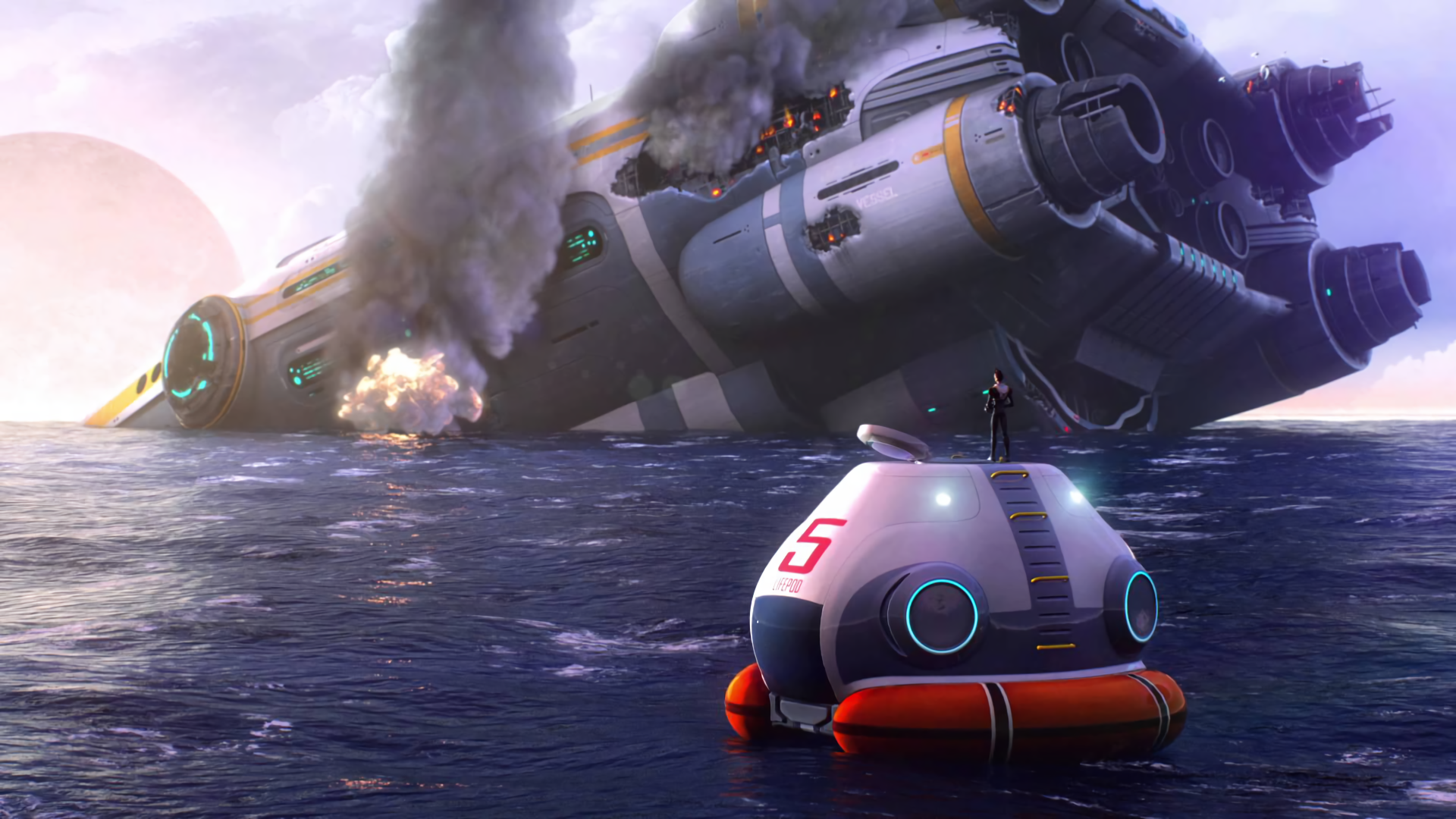 The best kind of survival games are ones where you forget you’ve been playing one, where every task doesn’t feel like a chore, where you never feel like you can keep yourself away. The best kind of survival games, don’t happen often. Subnautica is a gem, and one that we must treasure. Unknown Worlds have spent the past several years shaping what is undoubtedly the best survival game ever made. And with it being so well designed, thought-out, and presented, Subnautica should be the basis for which games of this kind should look to, for years to come.

When you begin a new game, you’ll be asked to pick one of four modes: Survival will have you managing health, oxygen, hunger, and thirst; Freedom only concerns you with managing health and oxygen; Hardcore requires you to manage all elements of survival and with only one life; and Creative which lets you build without constraints, but disables death and story. Freedom was the mode that I stuck with, and felt it strike a nice balance. Those looking for something more demanding and harrowing will find it in Survival and Hardcore modes, but given how central the story is to the game, adding any more layers of survival was too distracting. I would not recommend first-time players start the game in Creative, it seems to be meant for those who’ve already completed the story. Missing out on this story is doing yourself a disservice as the story is crucial to enjoying the Subnautica experience.

You might think that Subnautica is a survival and crafting game in the vein of Minecraft, where it is up to the player to make their own fun. Well, appearances can be deceiving, as I bought Subnautica in December 2016 when it was still in Early Access with this very thought. It seemed it was just a very pretty wrapper on the same old gameplay with a thinly veiled story to keep things interesting. That was only the half of it. This is a single-player game without any co-op or multiplayer. It is an open-sea exploration, and the survival and crafting elements support the core gameplay make this incredibly immersive. 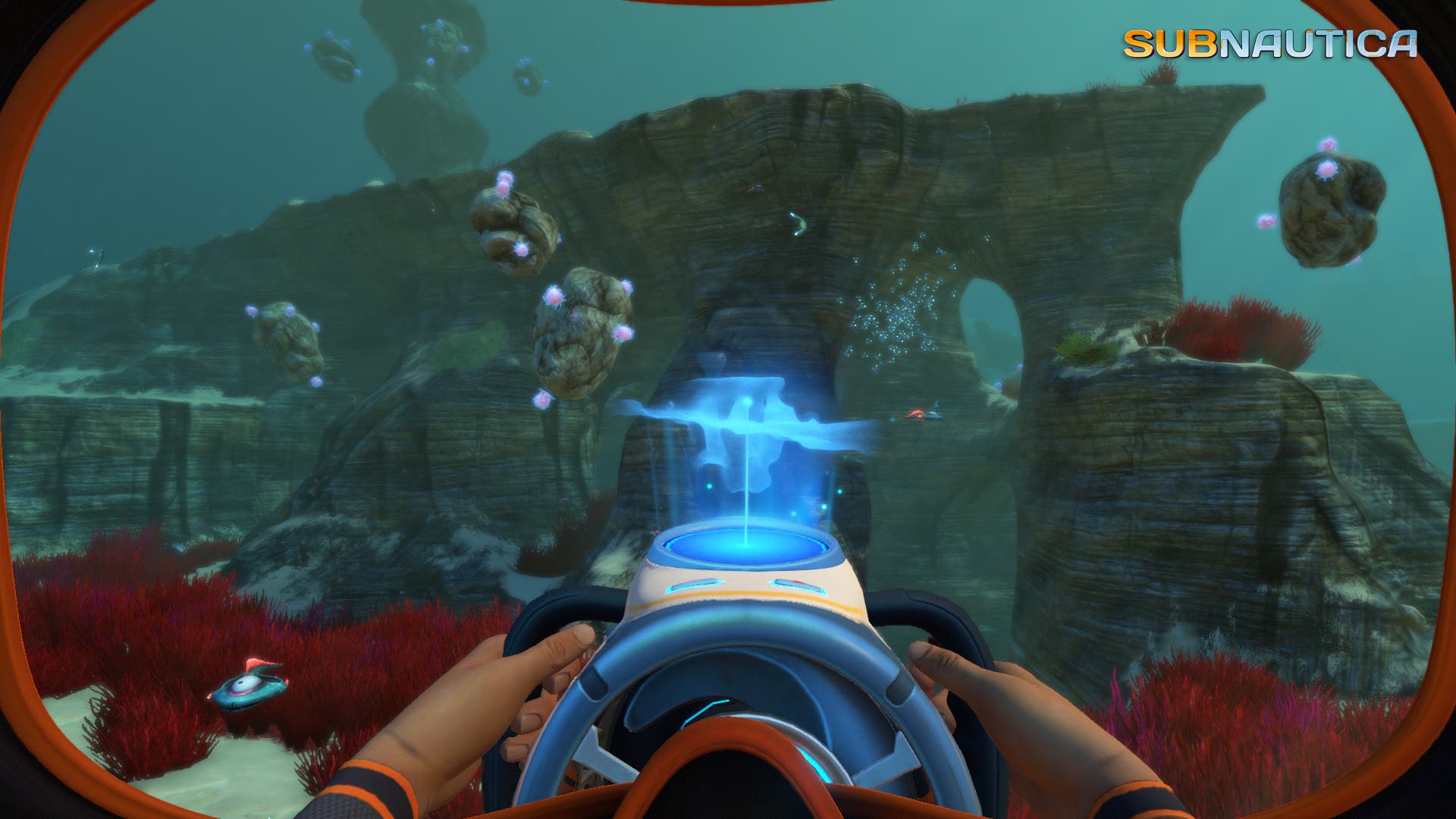 The story kicks off with you entering a lifepod aboard a crashing starship called the Aurora. After being unconscious for three hours, you awaken to a burning lifepod and work to retain stability before anything more tragic happens. Upon exiting your pod for the first time, you see the hulking starship has crash landed into the ocean nearby. Known only as Planet 4546B, this planet is seemingly mostly made up of water, and the crew of the Aurora has been scattered and all outgoing communication to Alterra Headquarters is not operable. While you can’t call out, once you repair communications, you will definitely receive messages. These range from disturbing messages left hours ago in people’s desperate attempts to get help or some hilarity found in some others. The voice acting here is really top-notch and worth listening to each and every one you come across.

While Subnautica is focused on delivering a story, it does so at a pace that feels natural and organic. It is triggered through discovery, time passed, and actions the player takes during the course of the game. All of this works hand-in-hand so that when you’re ready to take on the next task or discover the next thing, you aren’t overwhelmed. Exploration is encouraged, but you won’t feel the need to go too far until you’ve adequately prepared for the journey. There are secrets, questions, and mysteries that not only surround your inexplicable crash landing but for the planet itself. The active and passive storytelling keeps you invested and eager to learn more. 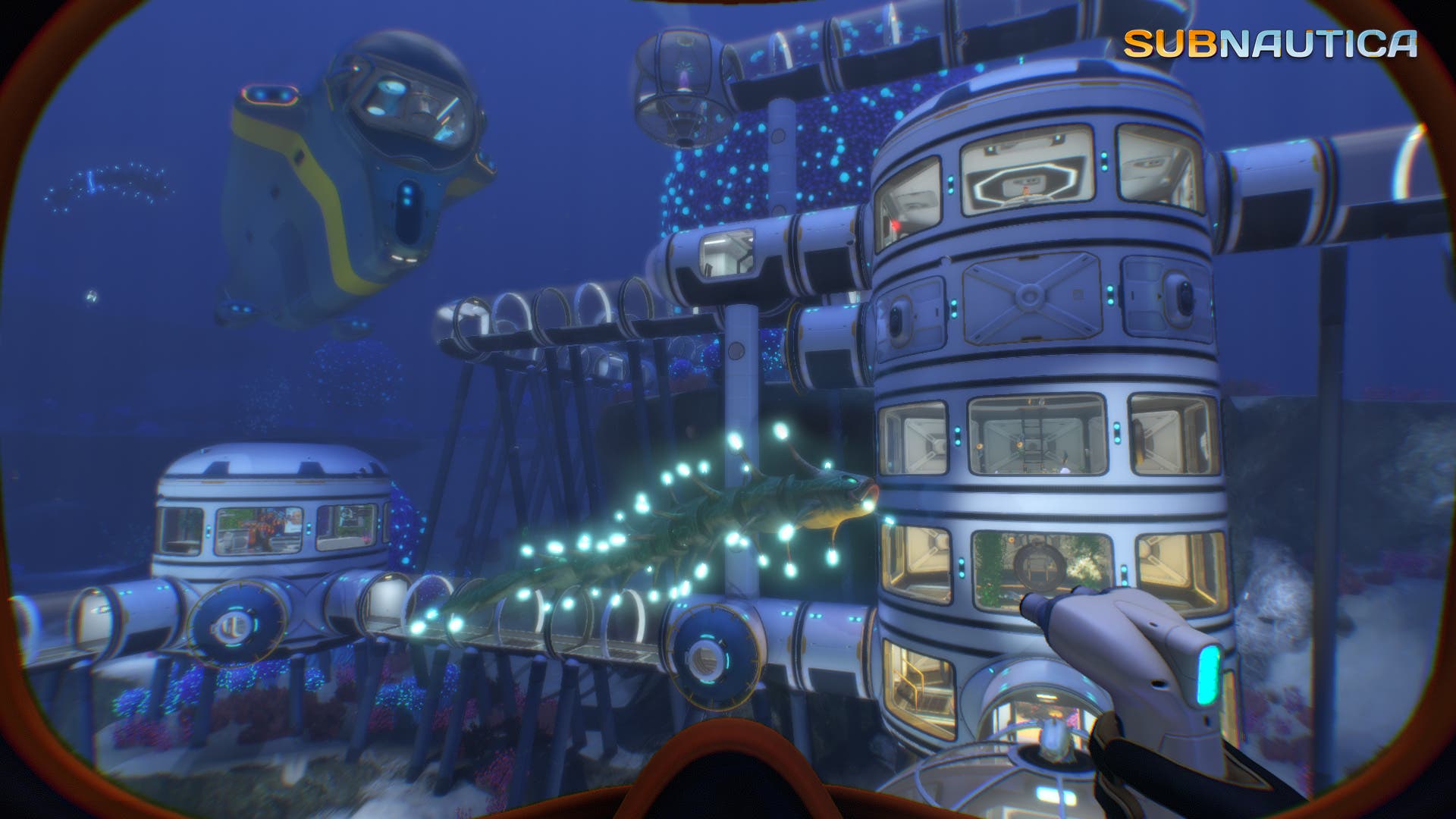 From the moment you first dive in the water, you are in awe of the spectacle of the water before you. The sun pokes through the waves and shines in godrays into the depths below. Sound becomes muffled and you begin losing air. You see creatures unlike anything you’ve seen before. Most of the aquatic life is bio-luminescent. You’ll quickly learn what’s passive and aggressive. Perhaps the most standout one is the fish who will try to mesmerize you, literally limiting the controls to 1/4 of their movement speed in an attempt to try to suffocate yourself. There is combat to Subnautica, but beyond using your knife to defend yourself, is minimal but done in a way where you feel vulnerable to each attack and never truly feel safe when underwater.

The act of swimming is great in Subnautica, with six degrees of freedom, the animation and corresponding movement speed feels natural. I did find myself getting lost in some areas of the game, but the game does a pretty good job at providing the tools and means so you don’t. For instance, you can craft a compass to give you direction, and you’ll always now your depth underwater in meters. However there’s no map to reference. This means you’ll have to rely on rote memorization in getting around. There were even times I drew notes and pathways so I could alleviate getting lost, like you would in an adventure game. There are a wide range of biomes in Subnautica from the safe shallows where you start in, to the blood kelp zone, and the exotic mushroom forest. Each of these places is segmented and easily recognizable to help you get around, and each has a unique characteristic and creature that lives inside of them. 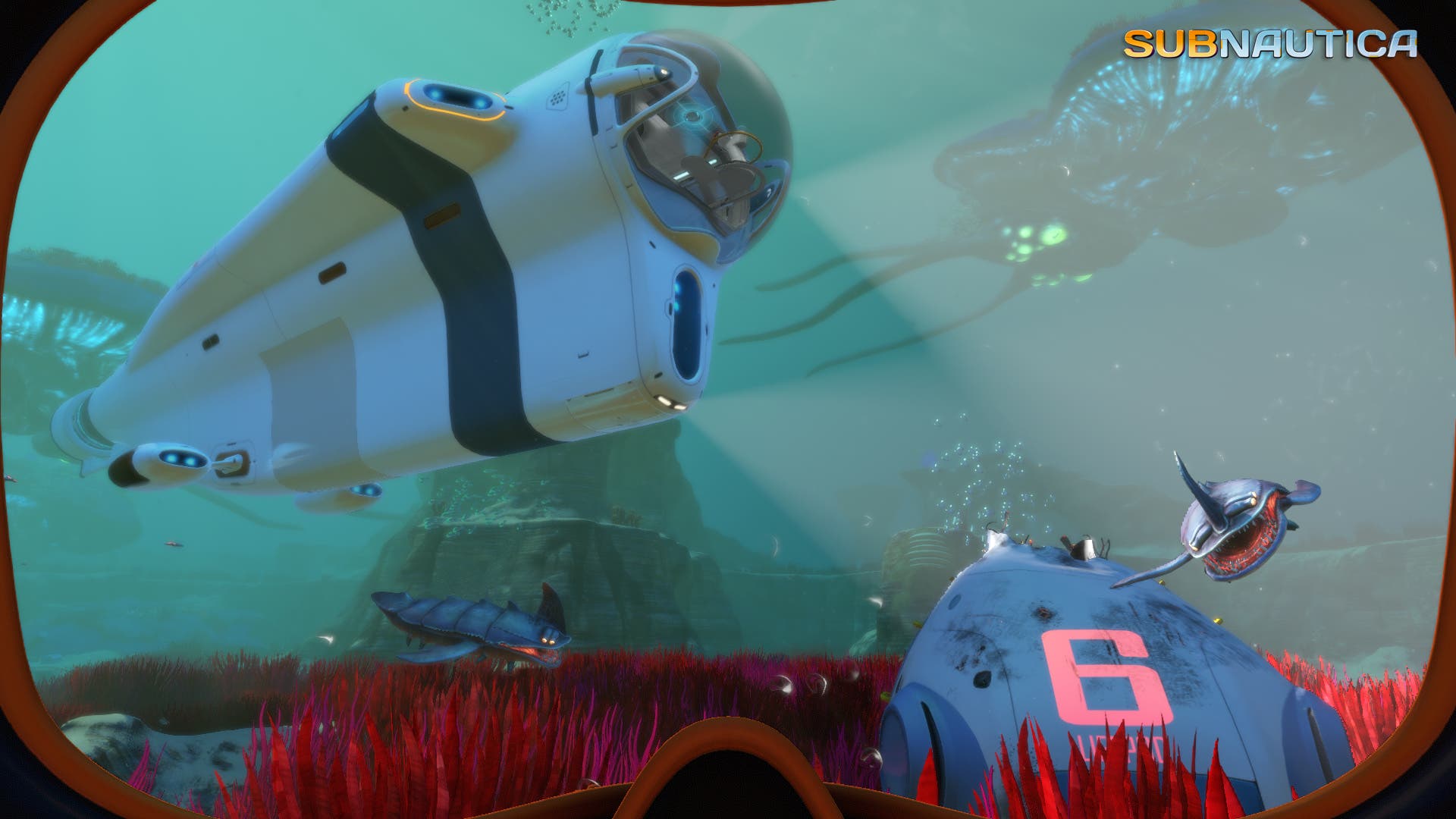 There’s a fabricator on board each of the lifepods which makes all of Subnautica‘s crafting possible. There are tons of blueprints that you start with, but even more you’ll acquire through your time with the game. Subnautica does not always hand you the blueprints directly, as you’ll have to find most of them on your own. There are a lot of resources to collect so that you can make batteries and power cores to enable your vehicles and equipment to function. There are items that you can build that will create renewable power sources for your bases and items so you don’t have to keep building from scratch all the time.

The blueprints you start with will allow you to craft basic items for survival like repair tools and a larger breathing apparatus, but also vehicles and the tools to build bases. While it isn’t exactly optional, building a base below can be done at a bare minimum, but you’ll grow to love it and want to expand it. The game doesn’t rely too much on simulation, but the game does try to curb your building by introducing hull integrity, whereby if you stress the base with too much, it can start to become weak and flood. This can combated by building foundations and other support structures.

When it comes time to start building vehicles, the game really begins to open up not only in the story but how you explore. The first thing you’ll likely make is the seaglider, which propels you faster than you can swim. Next, the major vehicle will be the Seamoth, and in my experience became the most used vehicle. However, it doesn’t stop there. You can build a mech suit in the form of a PRAWN suit. It is rather limited in its mobility at first, but with the right upgrades, can make this underwater beast something that really gets you around. The ultimate vehicle you make is a massive submarine known as the Cyclops. This is an exploration vehicle, and it gets damaged too quickly even with measures to distract or evade. The Cyclops can haul either the PRAWN suit or the Seamoth inside of it, and it is just fantastic to see and use. Though, I found that both the Cyclops and PRAWN suit became criminally underused and under-powered even with upgrades I had applied. I managed to get a lot done with the Seamoth and the Seaglide in tandem, which is a shame because you feel like you should be spending the rest of the game with the larger vehicles. 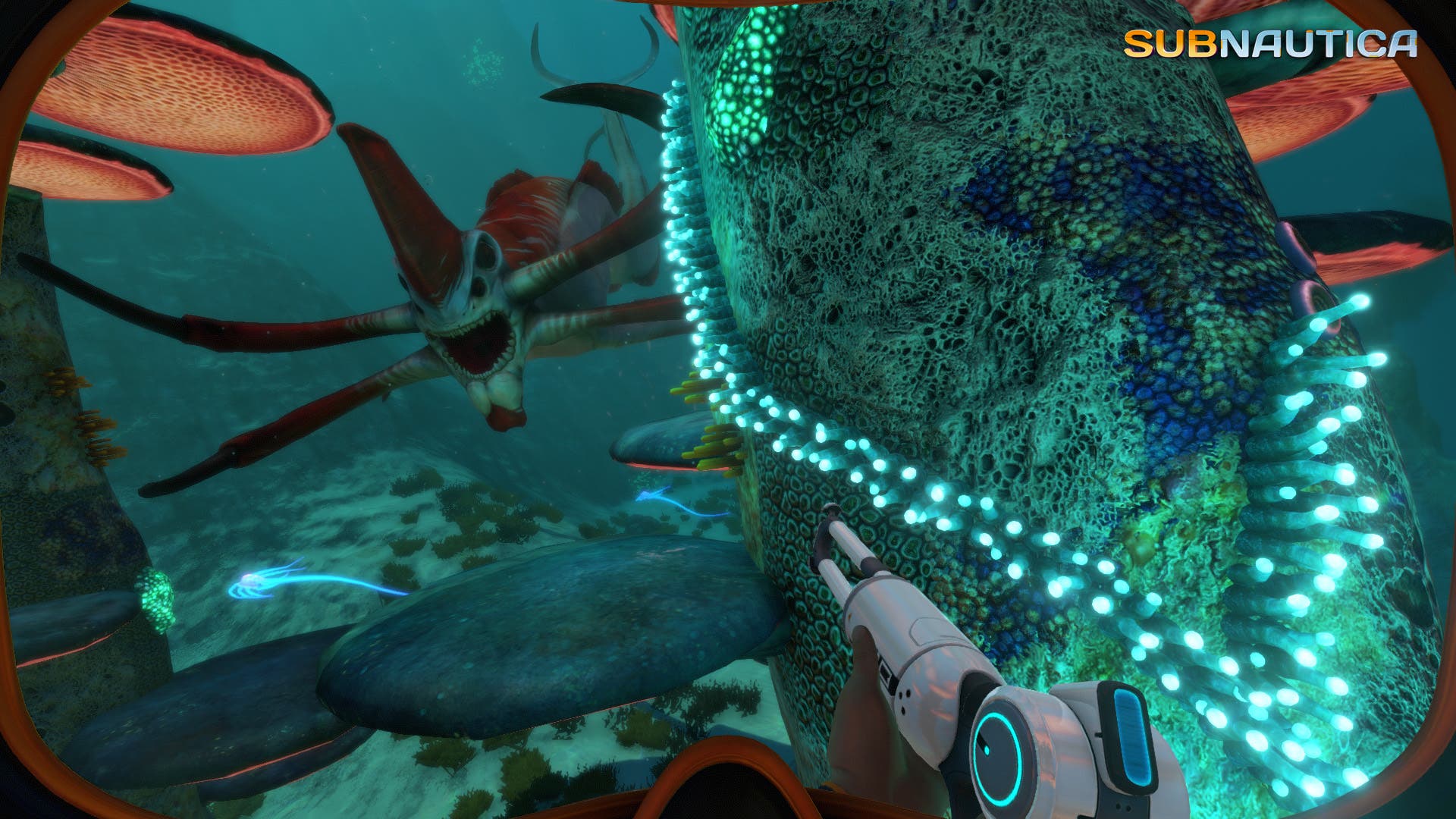 While this is not inherently a game full of emergent moments, they do exist. Though, it is usually around something catastrophic happening to the player. For instance, I had decided to go deep sea diving with the Cyclops, only for it to get attack by a massive sea creature lurking in the shadows and causing hull breaches and fires I was ill-equipped for. Then I received a dreaded warning that the ship was about to explode, and upon exiting the Cyclops, I witnessed it break into a hundred pieces and begin scattering across the ocean floor.

Subnautica is excellent about saves. It will auto-save at specific points, and in death, will do nothing. So provided you save often and carefully, you can reload your game and avoid these catastrophic events that you bring upon yourself. The save system is surprisingly handy for moments like this, and so long as you are aware you may lose progress, reloading might be better for you considering the materials required to build the bigger vehicles. You can continue without reloading a save, but I much prefer using the save system. 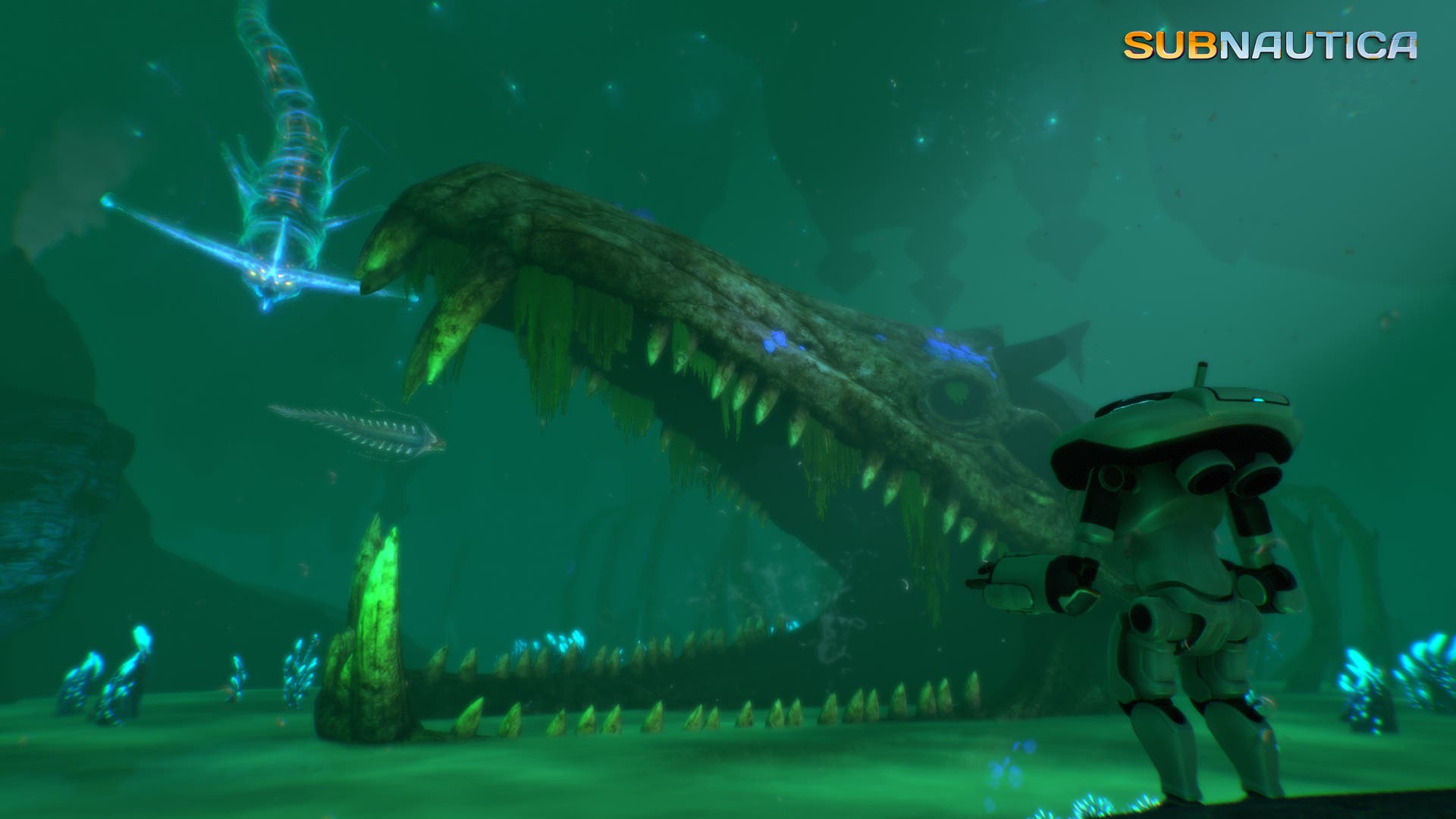 Subnautica for all my gushing is not without its faults. The game game doesn’t have fluff or filler content or stretches of gameplay, but it could be more expeditious in spots. I find that the game does do its best not to give you too much information at any one time, but it could be better about telling you what areas of the planet you’re in. By the late game, there’s a demand to find things you’ve never seen or thought to look for before, that could be helped by markers to speed up the process. On a technical level, this game runs wonderfully, but it is hurt by it’s constant pop-in and radical level of details changes depending on speed and proximity to the objects. It never took me out of the experience, but it something you can’t help but notice because it happens far too often.

Once you prepare yourself for the ending, you’ll feel ready. Along your aquatic journey, you’ll find time capsules. These are created by others players and approved by the developers for players to find in their own games. These may contain helpful items, but almost all will contain a picture and a thoughtful message. There will come a time for you to create your time capsule, and doing so will cause you to feel sentimental upon its creation. 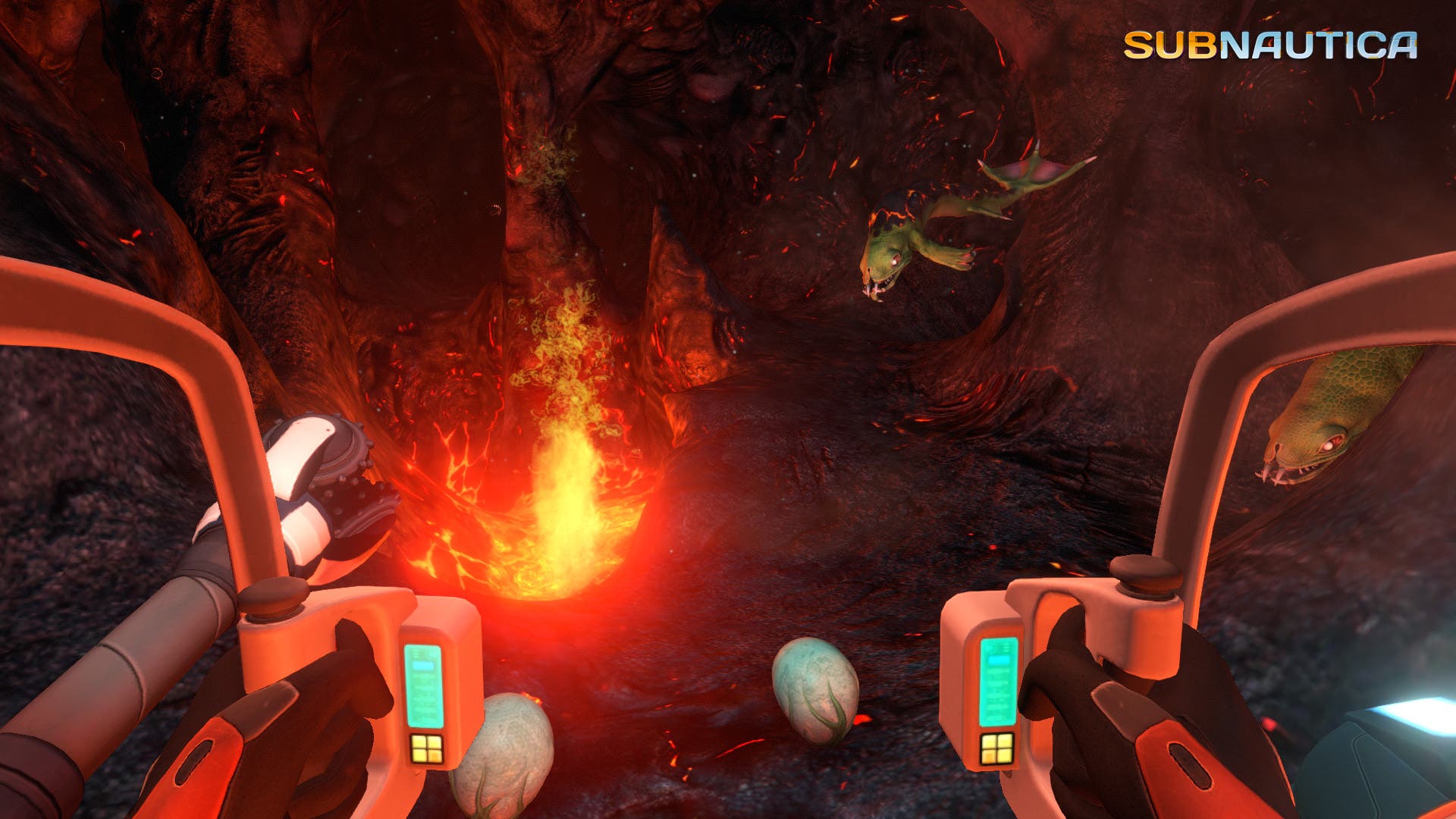 With over 40 hours in Subnautica, I have cannot recommend the game more. I enjoyed the crafting, base building, and survival elements based on the difficulty I chose. At no point did I feel like I was ever safe, though, as the underwater tranquility can make you feel that way. Even if you don’t like survival games, playing Subnautica is likely to change your mind, and show you that it is not like others you’ve played before. The narrative threads that string you along Subnautica‘s story are intriguing from moment one as you unravel it so carefully. Unknown Worlds have made an incredible game that subverts expectations of what crafting and survival games have been, and shows you what they should be.