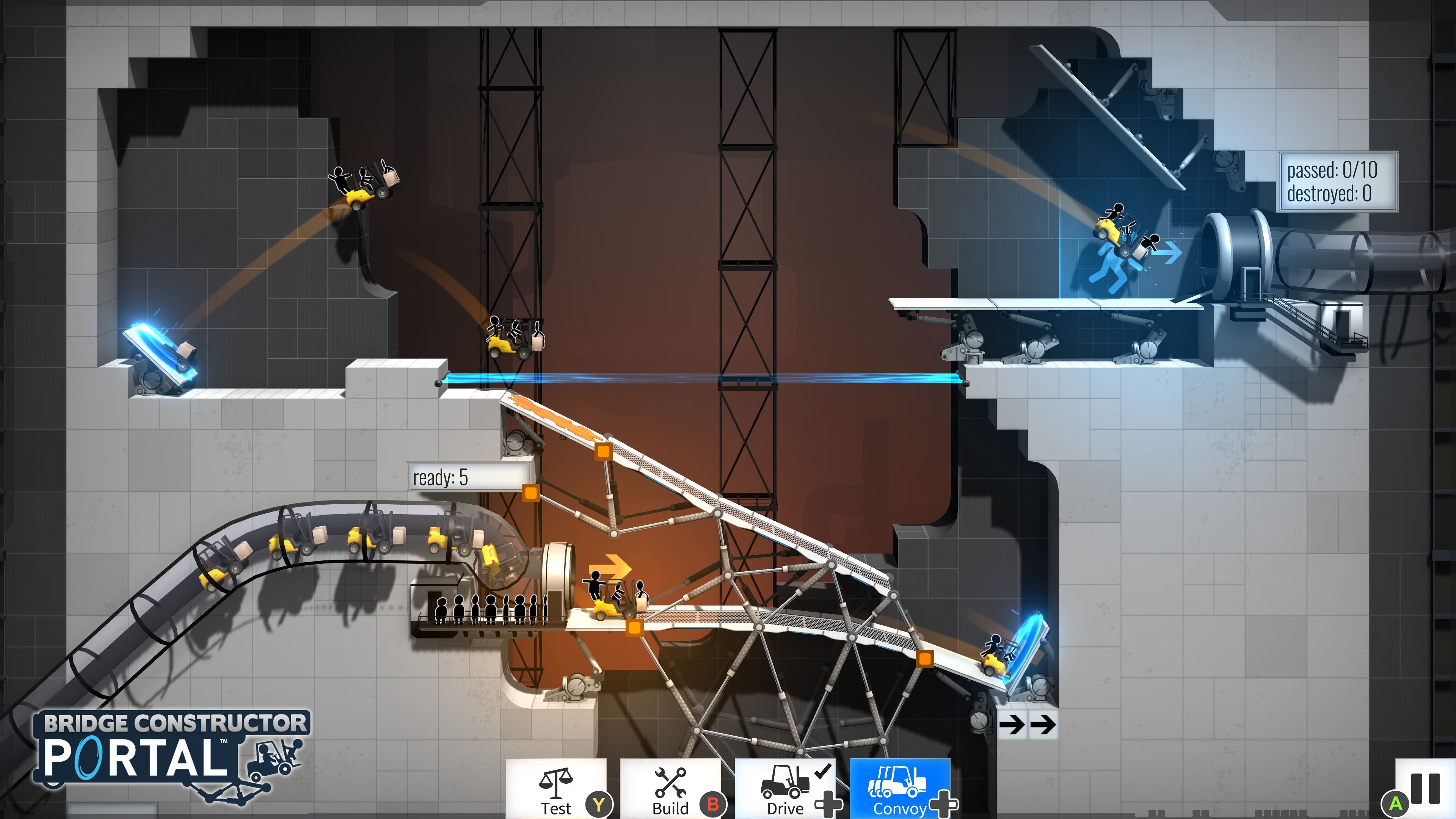 The Bridge Constructor series uses a realistic physics engine to follow the laws of structural engineering. So using a little engineering know-how will lead you to success in all of Bridge Constructor: Portal’s 60 levels. Suspension, truss, cable, arch, etc… are all viable bridge types you can create within the game. Or you could go wacky and try your own weird style. Don’t knock it if it works right?

In the early game, things are basically just bridges, but the deeper you get, the more complex your structures become. You’ll find that tools and traps from the Portal series will adorn these harder levels. Obstacles like sentry turrets or weighted companion cubes that will need to hold a switch down. Of course, it wouldn’t be Portal without those signatures blue and orange Portals. In Bridge Constructor they are used to add some new dynamics to the puzzle nature of the game. You’ll see some truly bizarre scenarios, leading you to create some truly unique solutions. 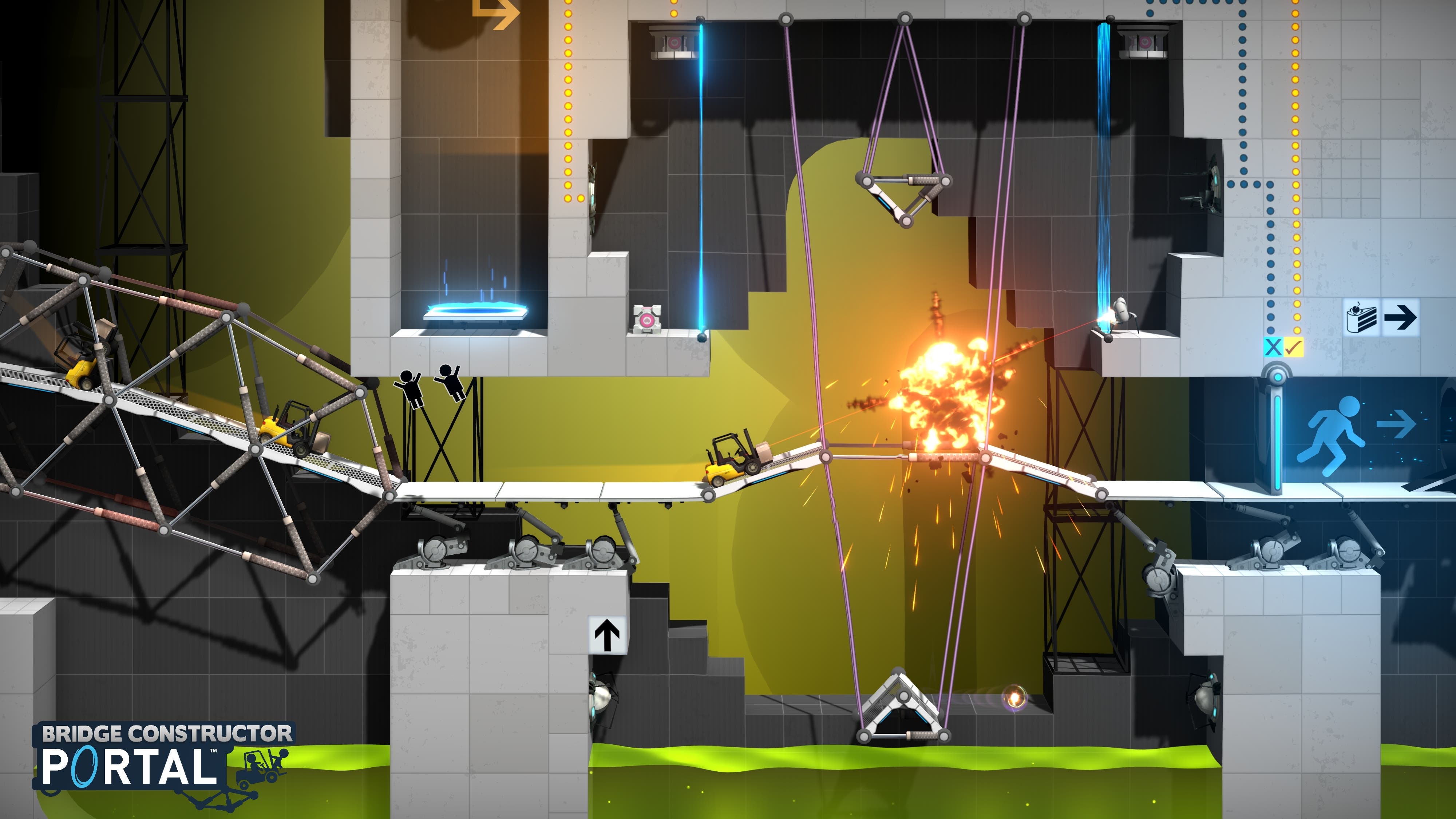 Going past the gameplay, the team has tried to encapsulate the Portal atmosphere with writing that is reminiscent of Valve’s title. The humor may not be as funny or witty but it sure is still entertaining. The game does feel like a cloth cut from the Portal Universe. From the art style of the levels to the signage and even shape of the Aperture Science employees (they’re the little people from the safety animations in Portal) You’ll even hear plenty of Ellen McLain, the voice actress reprising her role as GLaDOS, delivering lines in her iconic computerized voice. But the best part about this game is that, even without the Portal license, it could stand on its own with how much fun it is. Deep down it’s still the same construction fun that Bridge Constructor has been known for.

Of the 60 levels, you’ll easily find that most of them will be fun to solve. Sure there are a few frustrating ones here and there, and a few that are way too simple, but the game does a great job of ramping up the difficulty without it getting too hectic. In fact, you’re given the option to pass levels in two ways. You can complete the stage just by sending one vehicle successfully across, or you can make things harder and send a group of them. Of course, sending the group means your constructions better be able to hold together with the added weight and length of time needed to get those Aperture employee’s across. The only thing I would have liked to see in the game would have been more story elements to play out throughout the levels. 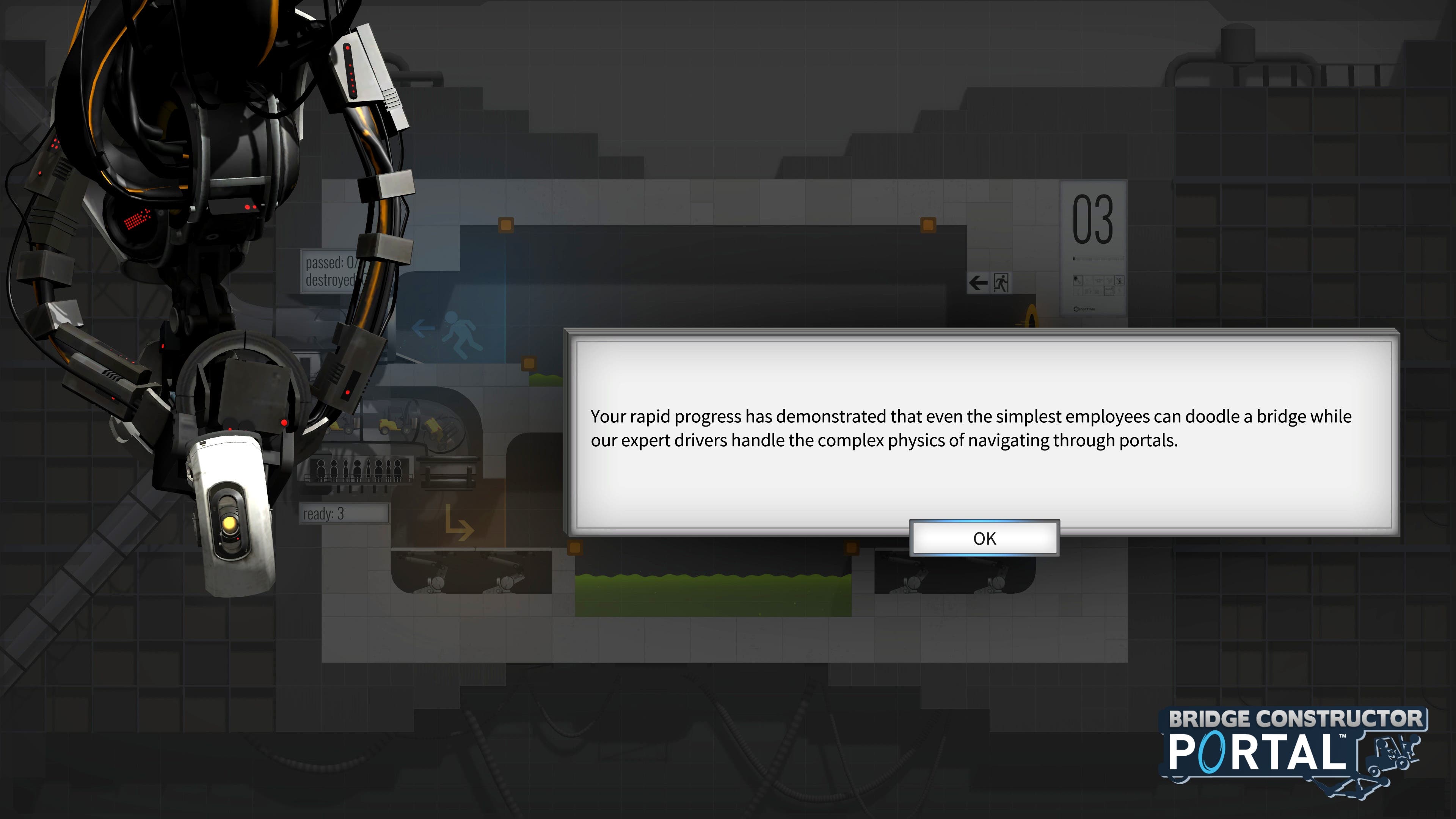 For $14.99 you’ll find a good time lurking here. To help you make a better-informed purchase though, you may want to look at the iOS or Android versions. If you do enjoy being able to play on smaller screens or on the go, the game is $4.99 there. I think all prices for the game are well worth it and plays great either way. But you’ll have to make the decision of price vs platform on your own. Bridge Constructor Portal is definitely a good way to pass the time in between bigger titles, or even as a nice palate cleanser between long gaming sessions.