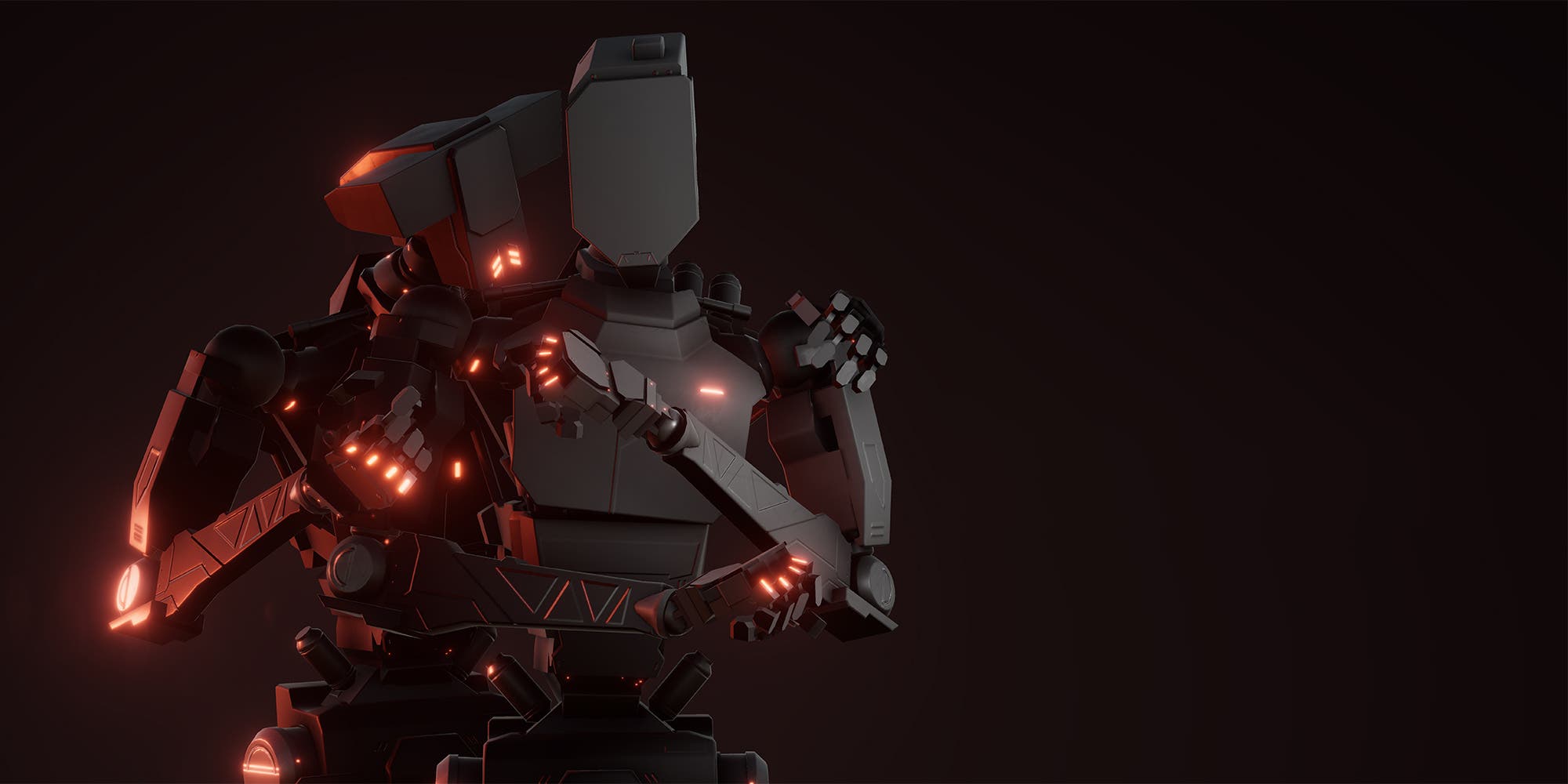 One of the major challenges facing any narrative-driven game is the successful execution of a story whose quality merits the player’s time spent. This is especially true for games which are essentially interactive dramas. While Subsurface Circular certainly isn’t a visual novel by any means, its core mechanic is story advancement through conversation. 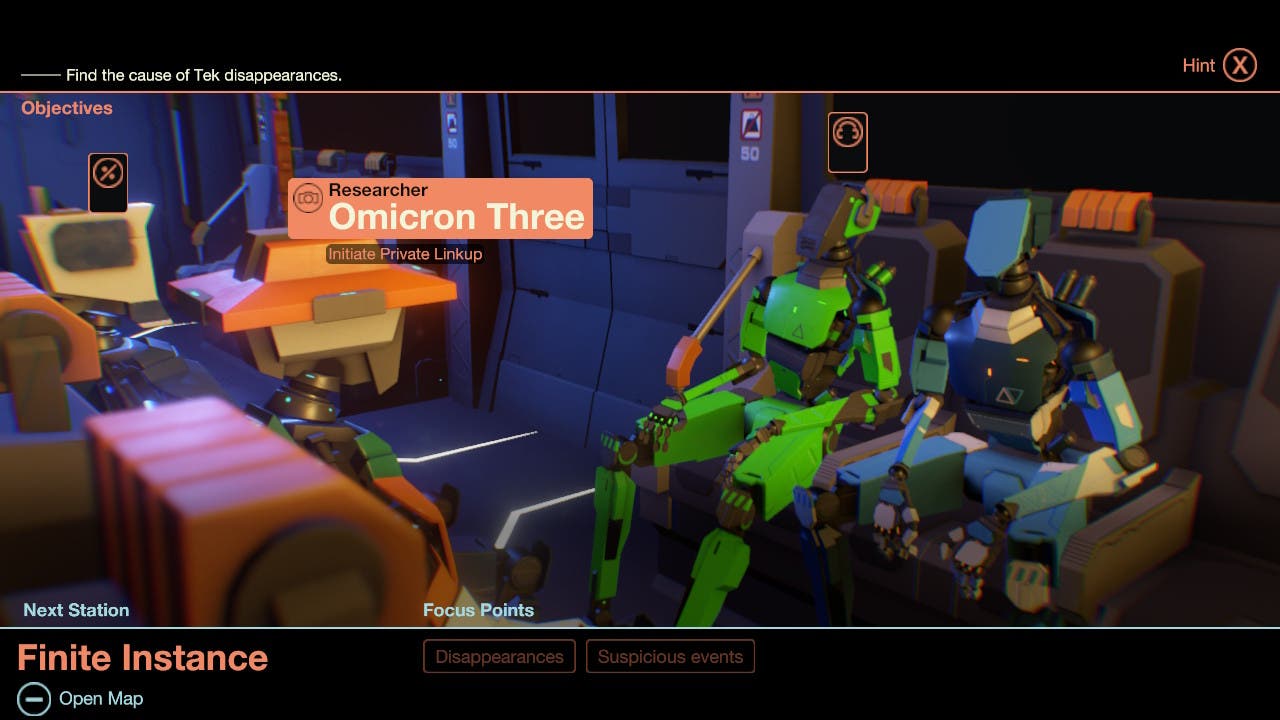 A story built on authentic conversations can be difficult to convey effectively; Subsurface Circular overcomes this by imbuing robots with believable personalities, their behaviors and motivations cast into archetypes that fit with their programmed role in society. Ordinarily, humans written to lean into stereotypes would come across as shallow and ineffective, but in the case of Subsurface Circular’s Teks, this sort of typecasting is put to good use as a plot device. The Teks are given interesting opportunities to reflect on their assigned roles (and as such, their given purpose), and whether they find joy, fulfillment or comfort in them. 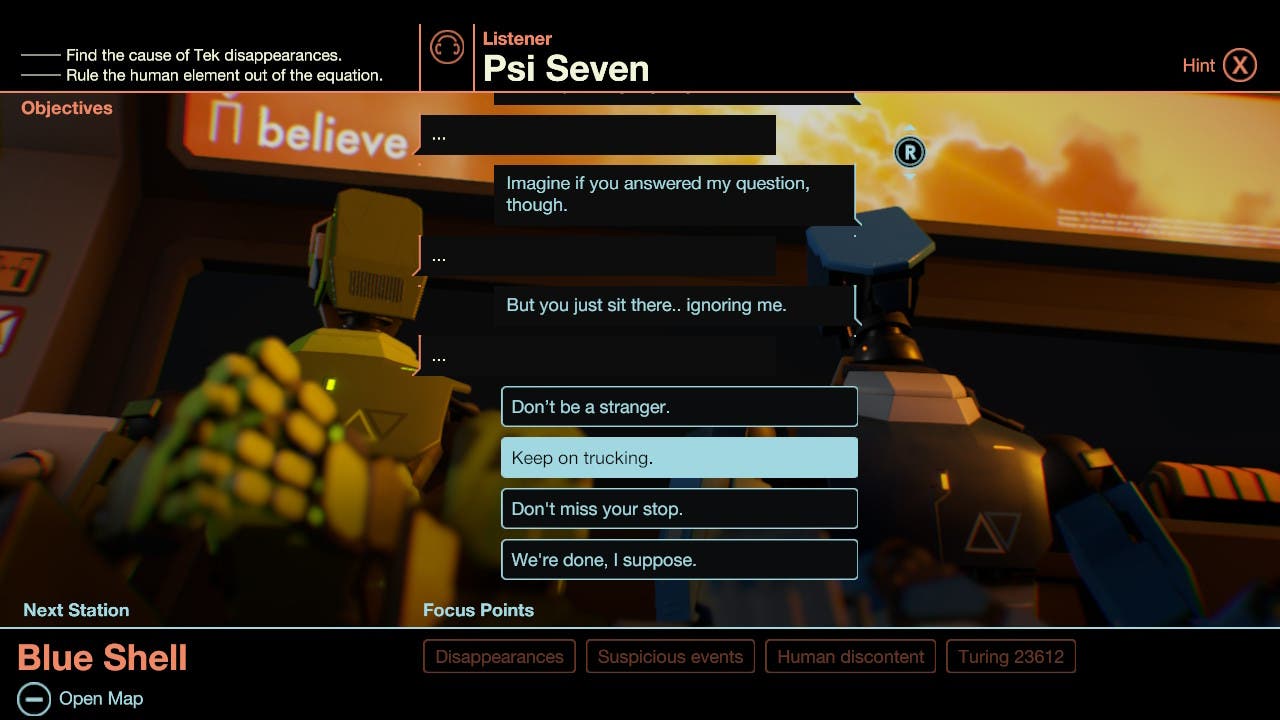 One of the things that I like most about Subsurface Circular’s story is that it doesn’t present definitive answers to these questions, but instead offers a variety of thoughtful perspectives through which to consider the implications of these concepts for yourself. These perspectives are presented through the cast of characters you will meet as you ride on the game’s titular public transit line, talking your way through the game’s seven chapters as you seek to uncover the truth behind recent (and mounting) disappearances of other Teks.

Playing as a high-intelligence Detective Tek, you elect to investigate these disappearances during the game’s opening sequence. Your investigation is limited by the fact that you are programmed to remain on the Subsurface Circular line, but because it is a main thoroughfare for other Teks, it gives you ample opportunity to meet and question Teks from all walks of “life.”

The gameplay is relatively standard fare for a narrative game, but the care given to designing a streamlined and intuitive interface is well appreciated here. The scene within the subway car serves as the background to the conversation which plays out in the middle of the screen. You initiate private links with various Teks as they come and go on the train, ask them questions about their role, and piece together information that you gather from all of these otherwise unrelated individuals.

The choices you’re given are scripted to fit with the goals of the underlying narrative, but they are thoughtfully considered. For most lines of conversation, you’re given dialog options that let you take on a friendly, neutral, or mildly “aggressive” demeanor. Some options are laced with sarcasm, others with a frankness that ordinarily might carry a risk of insult if asked of humans. Luckily, most Teks are affable and will treat brasher responses with the same logical pragmatism they would a positive or neutral one. As such, you are given the freedom to characterize your Tek (Claire One One, in my case) as you see fit, without much risk of negative repercussions or shutting yourself off from critical options. I found this sort of freedom to be highly refreshing and very appropriate for the world it was painting. 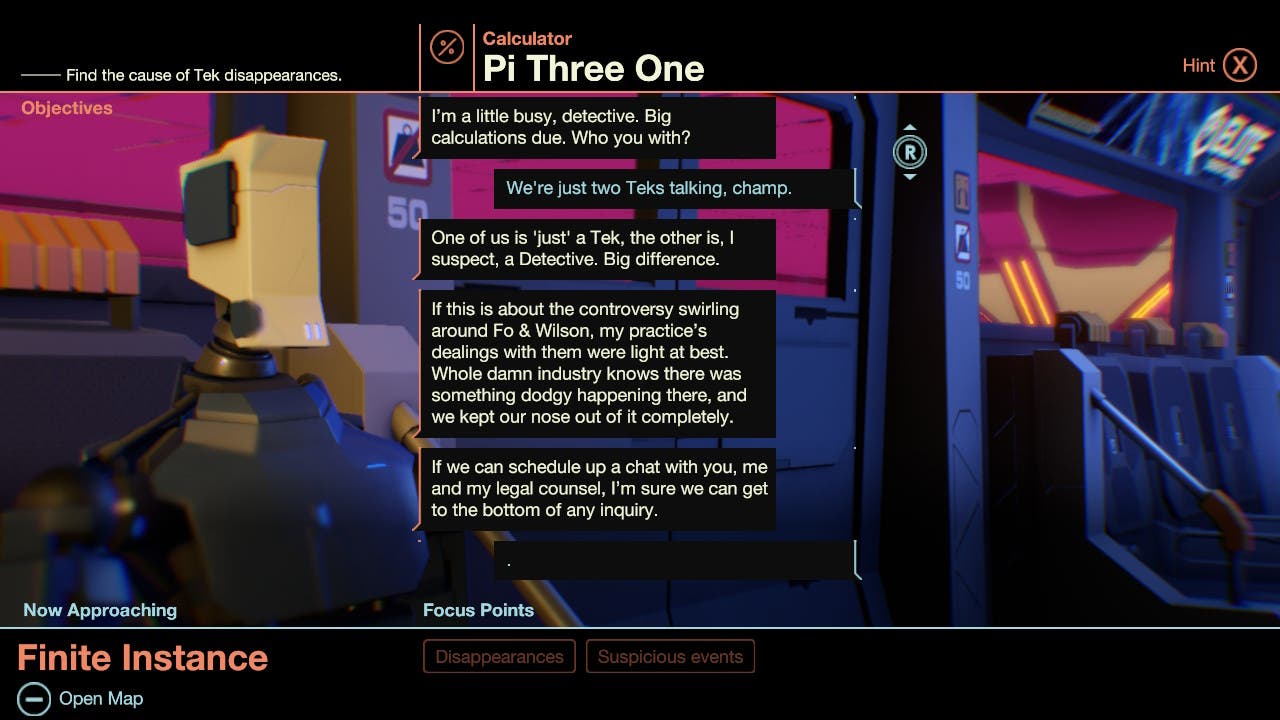 As you work through your investigation, you will unlock “focus points”, or specific conversation options that you can use to probe the Teks you meet about crucial elements of the case. Some focus points are fairly versatile and long-lived, others only have real utility with one specific Tek. They will cycle in and out of your “inventory” as the story progresses (some more quickly than others), but you are almost never without something meaningful to ask. The game’s interface ties so directly into your Tek’s primary function, I often found myself wondering if other Teks were similarly presented with conversation “options” that they could use to respond with, or if that functionality was reserved for high intelligence Teks in the detective role.

I think this is a testament to the quality of the world building in Subsurface Circular. The entire game plays out as a future-noir detective story operating in the confines of a bottle episode, with the exception that only your character and the surroundings remain unchanged. Other characters come and go “freely” (within the parameters of their programmed roles), but your intelligence is so high—described as “near human”—that you are forced to remain on the train for the safety of society at large. Rarely have I witnessed this kind of trope be used so effectively as a plot device, but here it succeeds in helping establish both the game’s setting and believable reasoning for various character behaviors. 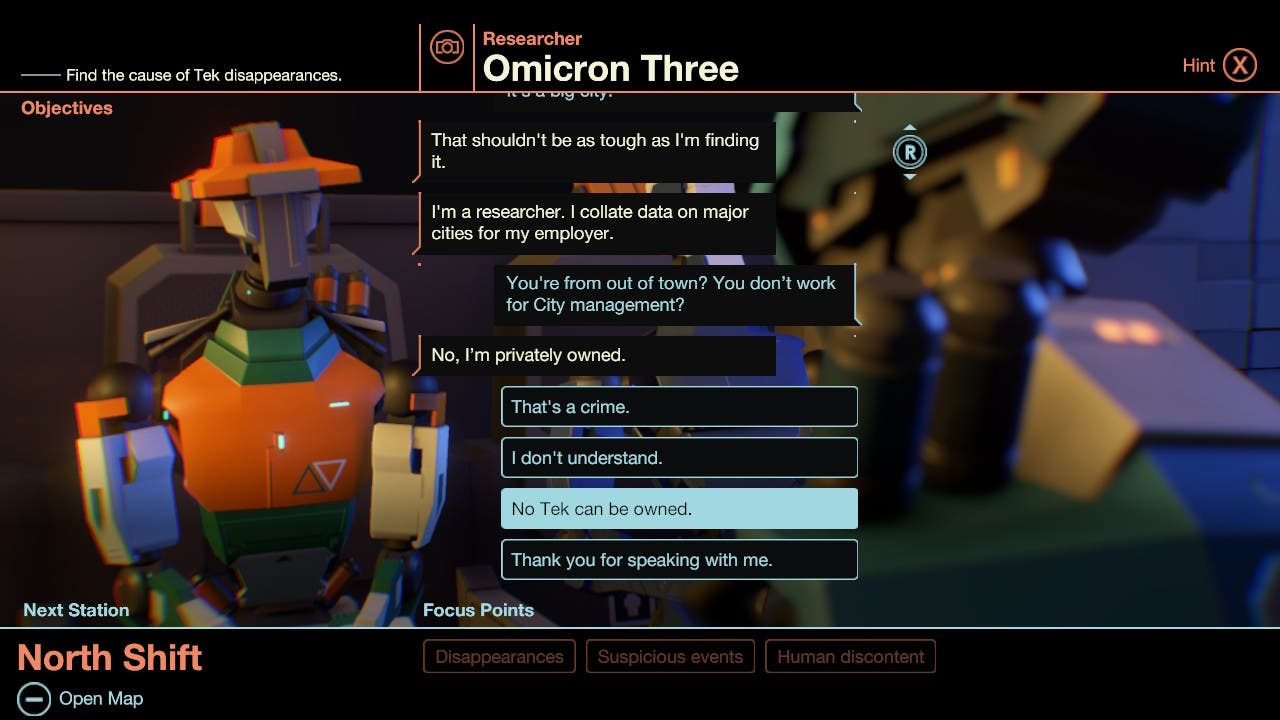 The Teks are all humanoid-looking robots without faces, a decision their creators made to overcome the Uncanny Valley problem of interacting with AI. Conveniently, this also makes it much easier for you, the player, to impose upon the Teks your unique reading of their personalities as you get to know more about them, including the main character. The game does an expert job of using its visuals to establish a larger context for the world, while leaving the narrative and the player’s mind to fill in the minute details. This is of particular interest because while this common in traditional written fiction, it is far less so in gaming, and difficult to deliver on so effectively as it is here.

From a technical standpoint, I was a bit surprised that, given the seeming simplicity of the game’s scenes, models and graphical presentation as a whole, the game is locked to 30fps in the Switch’s handheld mode. It would seem that the game ought to be able to run at a smooth 60fps, however there appear to be some technical limitations at play which prevent this. While a high framerate is certainly not essential to playing the game, I feel that the lovingly crafted artwork and robot animations (which are quite convincingly rigged) could really shine more if they were presented with this added level of fluidity and fidelity. 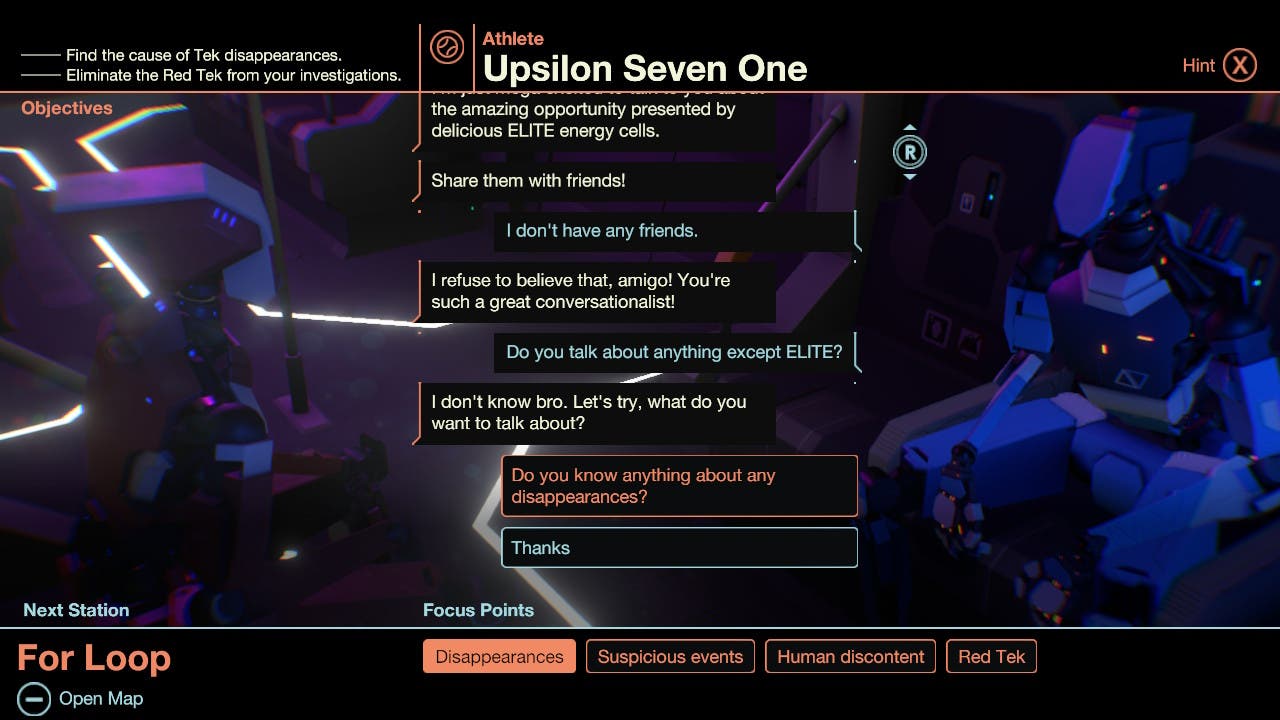 Ultimately, Subsurface Circular succeeds because of its commitment to the execution of its core concepts. It is highly focused on telling a particular story and sharing specific themes, and the result is a game whose mechanics, artwork and interface aren’t just related to the story, they exist in service to it and as essential parts of the narrative. All of the elements of a great detective story are here, and the game’s ending gives the player a great deal of agency in determining how the case resolves. My only real disappointment is that I felt my time spent with it was slightly shorter than I would have liked; I would love to have seen the third act play out a bit longer and experiment more with its own circumstances. However, the overall narrative is strong and impactful, and it was a pleasure to sit down and spend a few hours with a good sci-fi mystery.