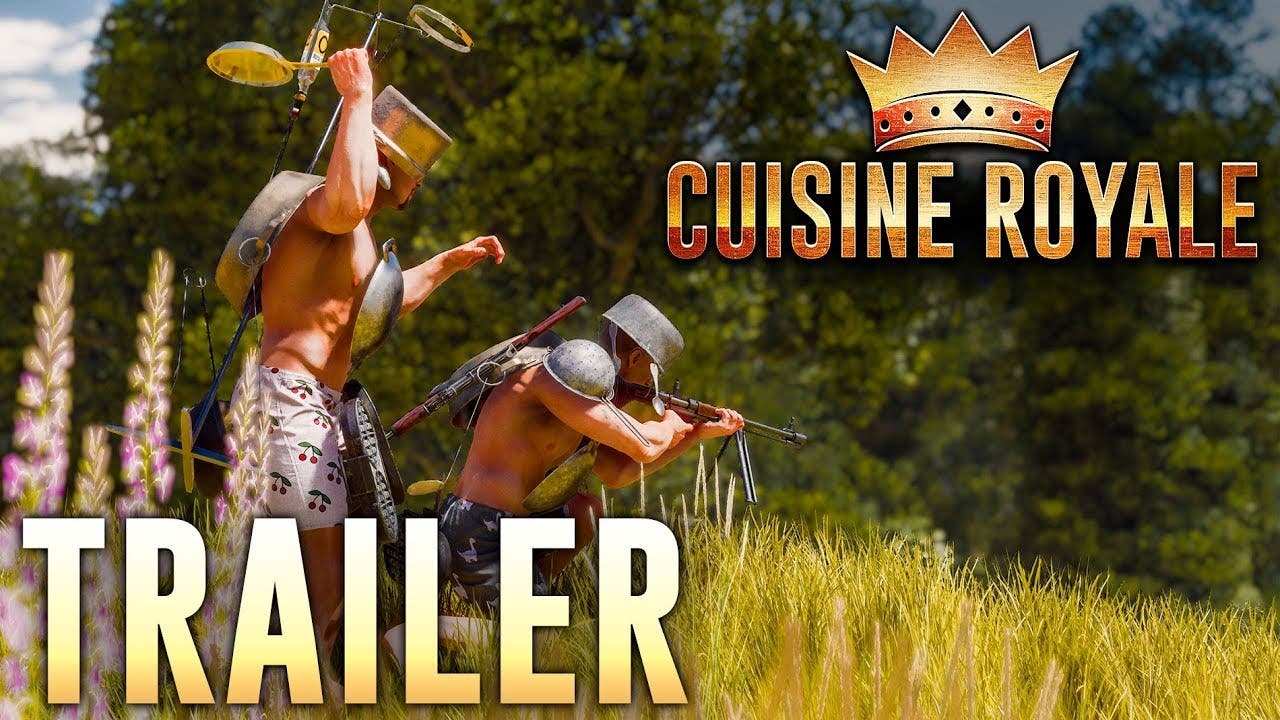 June 25, 2018 — Based on the overwhelmingly positive reception for this year’s April Fool’s Joke, which was initially meant to be a limited-timed release, Gaijin Entertainment and Darkflow Software released their all-kitchen-warfare MMO shooter Cuisine Royale as a standalone title. Available now on Steam, and for an extended period until July 2nd entirely free to download and keep, Cuisine Royale has been added to the library of more than one million Steam users in less than a week, appearing at #3 in Steam’s “New and Trending” section under Free-to-Play Games.

Built on upcoming squad-based multiplayer shooter Enlisted, and combining the latest flavors in the video game industry, Cuisine Royale pits players in a vicious “Battle Royale” deathmatch mode. Armed with nothing but their skivvies, players must locate and stockpile an arsenal of World War II weaponry, ranging from various pistols and rifles to heavy machine guns. In addition, kitchen utensils, such as cooking pots, colanders, waffle-makers and frying pans, are also available, adding the necessary ‘spices’ to serve players with an entirely distinctive Battle Royale experience.

Dinnerware and kitchen utensils, which have long been overlooked in terms of their combat capabilities in other games, will finally be able to show off their true potential in Cuisine Royale. Players can use a colander as head protection, equip a wok pot as a formidable breastplate, or strap on a massive waffle maker to be protected even against the largest calibers of weapons. Some of the items found in game can be used both in defense and offense, like the versatile pancake pan that can shield against incoming bullets as good as it can brain enemy players. Other items that can be found on the battlefield are even more exotic: Strapping on a medical dropper will provide the player with accelerated health regeneration, a set of glasses will increase weapon accuracy and chewing on a cuban cigar will turn the player into a real Tough Guy able to withstand even more physical punishment!

Of course, besides an impressive arsenal of kitchen utensils and exotic items, players can also use a wide array of more traditional Battle Royale equipment. The available weaponry in Cuisine Royaleincludes various melee weapons, such as knives and axes, and – among many others – famous firearms, like the M1 Garand and Mosin Nagant rifles, the Thompson or MP40 submachine gun, or even the renown AKM assault rifle.

Also available in-game are Loot Boxes in various degrees of rarity, but in Cuisine Royale they are entirely, 100% free. Scattered around the battlefield in the form of fridges, they include not only delicious foodstuffs to increase player health, but also contain weapons and other equipment.

Developer Darkflow Software has already announced additional features to follow the game’s successful launch, including the soon to be released squad feature for cooperative play and character customization options.

Ready your wartime recipes and aim for three stars in Cuisine Royale, the all-kitchen-warfare Battle Royale MMO shooter. Everyone cooks his own victory!

Get it on Steam (free until July 2nd):
https://store.steampowered.com/app/884660/Cuisine_Royale/