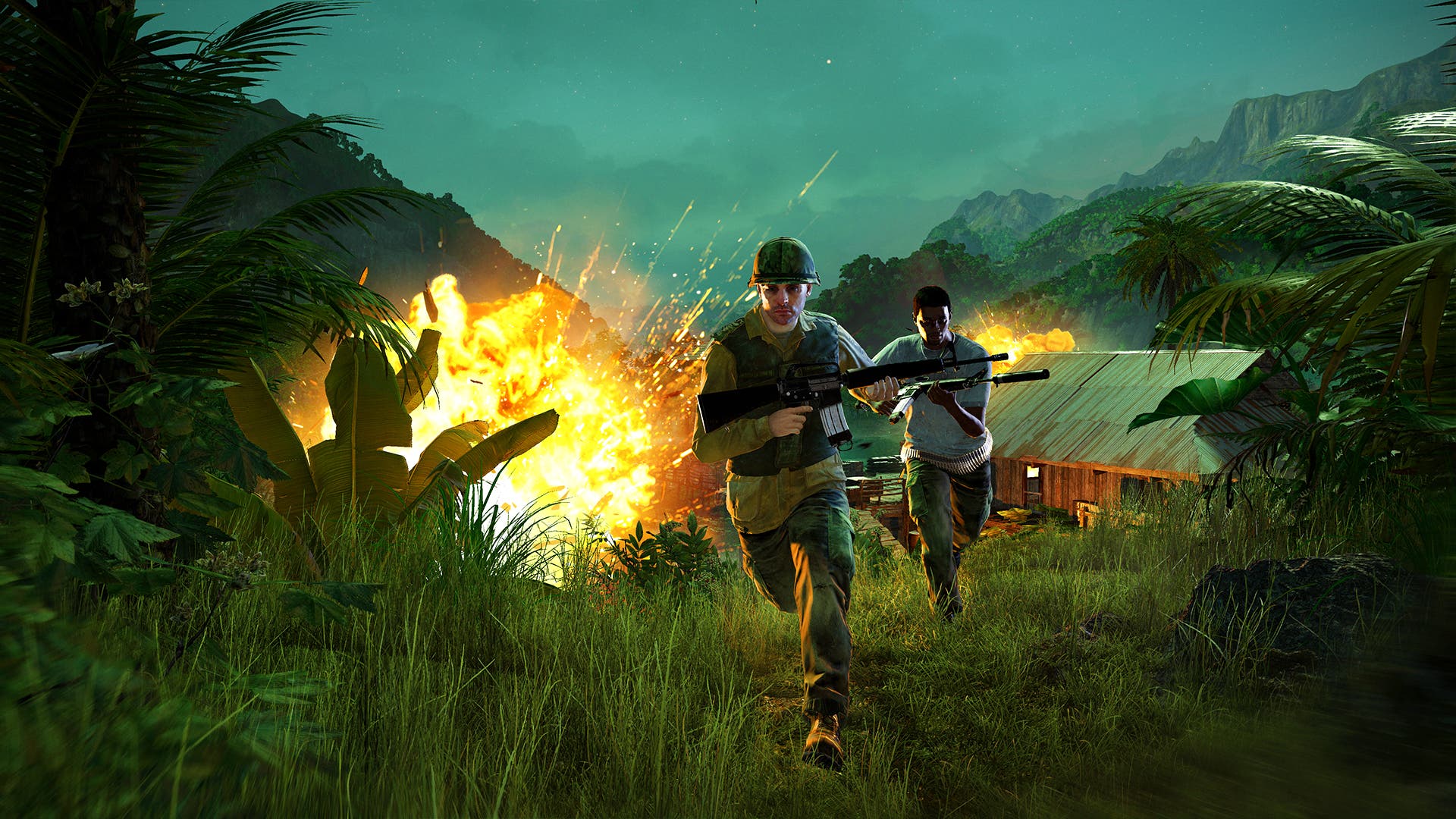 Hours of Darkness is the first DLC for Far Cry 5, going into the past during the Vietnam War via a standalone story. While the events of this DLC doesn’t directly correlate to the main game, it does take one of Hope County’s residents, Wendell Redler as he recollects the events of his time in Vietnam. Those events are rather unsettling at times, but mostly forgettable. Now, Hours of Darkness isn’t anything to write home about, though it’s not a “Dear John” letter either. It straddles a line of just being ‘okay’, and that’s okay. 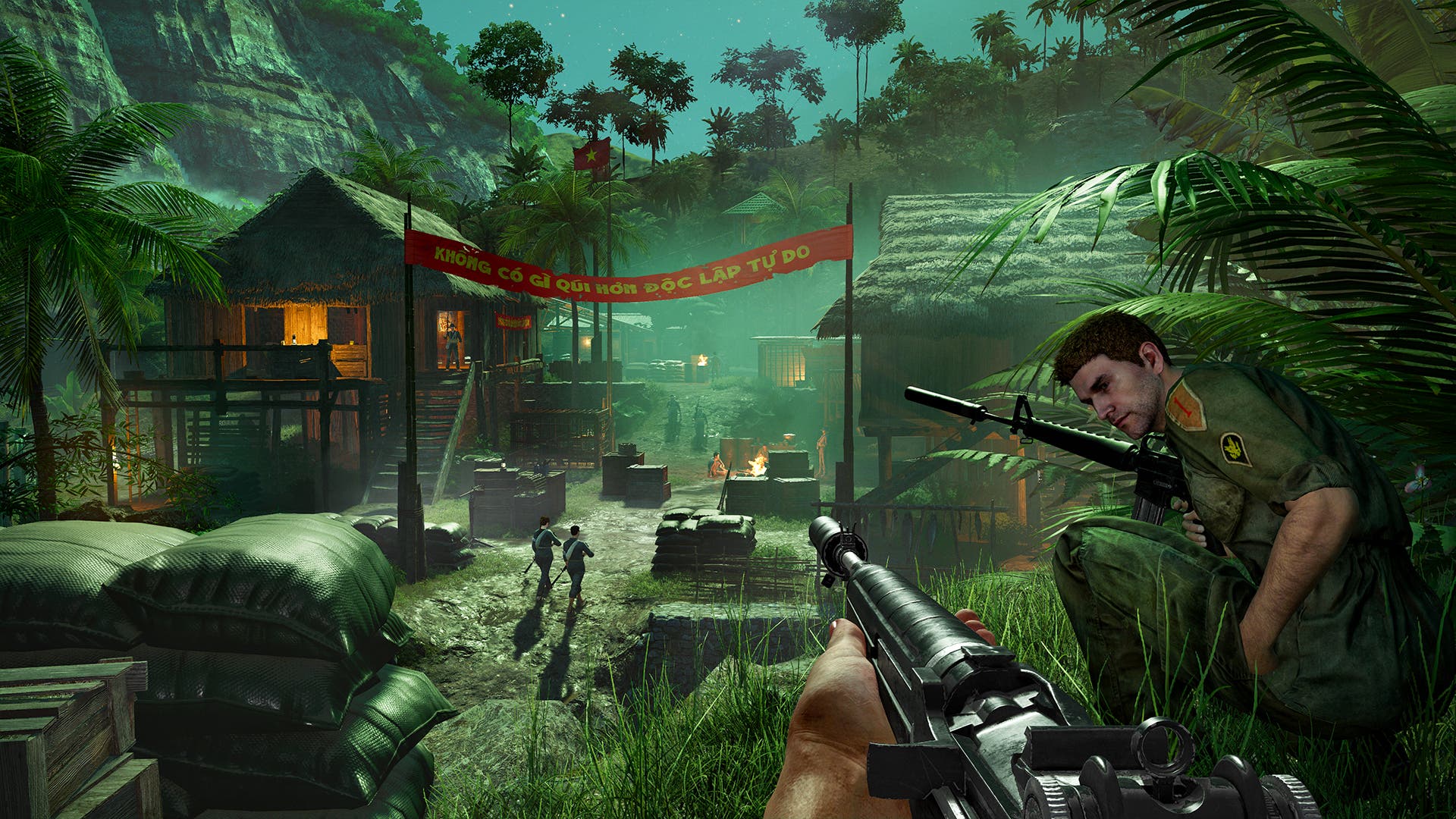 Hours of Darkness is a more serious take for Far Cry DLC. This is definitely not the goofy faux-futuristic Blood Dragon of Far Cry 3 or even the slightly serious Valley of the Yetis of Far Cry 4. Your helicopter crashes into the Vietnamese jungle, and your squad has been taken and the rest are dead. You’re left with nothing, and must make your way to the other side of the jungle towards your extraction. Hours of Darkness is jungle warfare, with a focus on stealth. You’ll find Vietnam War-era weapons like AK47 rifles, M16 assault rifles, M1911 pistols, and SVD Dragunov sniper rifles. The latter weapons have suppressed variants that can maintain silence and stealth. You only get three weapon slots, so it is imperative you pick your weapons wisely as you work your way through the jungle.

The Hours of Darkness DLC takes place on a rather large map, but not with many places to visit. Everything is spread out, which helps in the feeling of being lost in a jungle. You’re given a map from the outset, but everything is covered in a fog of war. As you complete challenges, you’ll receive intel that puts points of interest on the map. Exploration and doing the most you can helps you uncover more of the map and all that’s offered here. This DLC, like the main game can be played in co-op which is something that you wouldn’t expect this to do, especially with its survival elements.

The perk system has been gutted and reduced down to something more simplistic and in-tone with this side story. It’s called Survival Instinct, and across four stealth kills you can build it up where it can give you different benefits. With the first tier, you get adrenaline for faster movement while crouched. Second tier makes you quieter when moving and reduces fall damage. The third tier adds the ability to auto-detect and tag enemies nearest you. And the fourth tier lets you tag enemies through walls. Survival Instincts acts like being entrenched in the jungles and only have your wits about you. This, all goes away as soon as you’re detected and you’ll have to rebuild the perks back up with successive stealth kills once more. The give and take of it being so easy to gain and lose simultaneously nullifies its purpose.

Challenges return here, but not like how they were in Far Cry 5. These serve as the main and side missions that Hours of Darkness offers. You’ll have to free south Vietnamese POWs, destroy AA guns, eliminate NVA commanders, secure NVA camps, collect lighters from crashed US pilots, and destroy Vietnamese propaganda speakers. The propaganda speakers are more like “shit talking” speakers, as the faceless villain lady behind them berates you at every turn. It’s amusing and terrifying all the same.

A change-up this DLC offers is the way Guns for Hire works. They are populated by your squad, if you happen to find them and rescue them. Sadly, they can die permanently. It’s kind of a bullshit system with no way of going back (like a hard save), because I had one die under mysterious circumstances I wasn’t able to correct. It enforces the survival but it seems buggy and random how they die, like how they can take a thousand bullets in the face with you nearby, but if you stray five feet from them, they will die immediately. Now, you could avoid this by saving them and not hiring any of them so they remain in invisible safety, but seems to deter from the point of the system.

Hours of Darkness has its ups and downs, and features more slow moments than intense ones. This also is determined whether you play stealthily or not (which would upend the entire perk system). As you move towards the main objective on the map, the time of day changes with it to align with your progress. 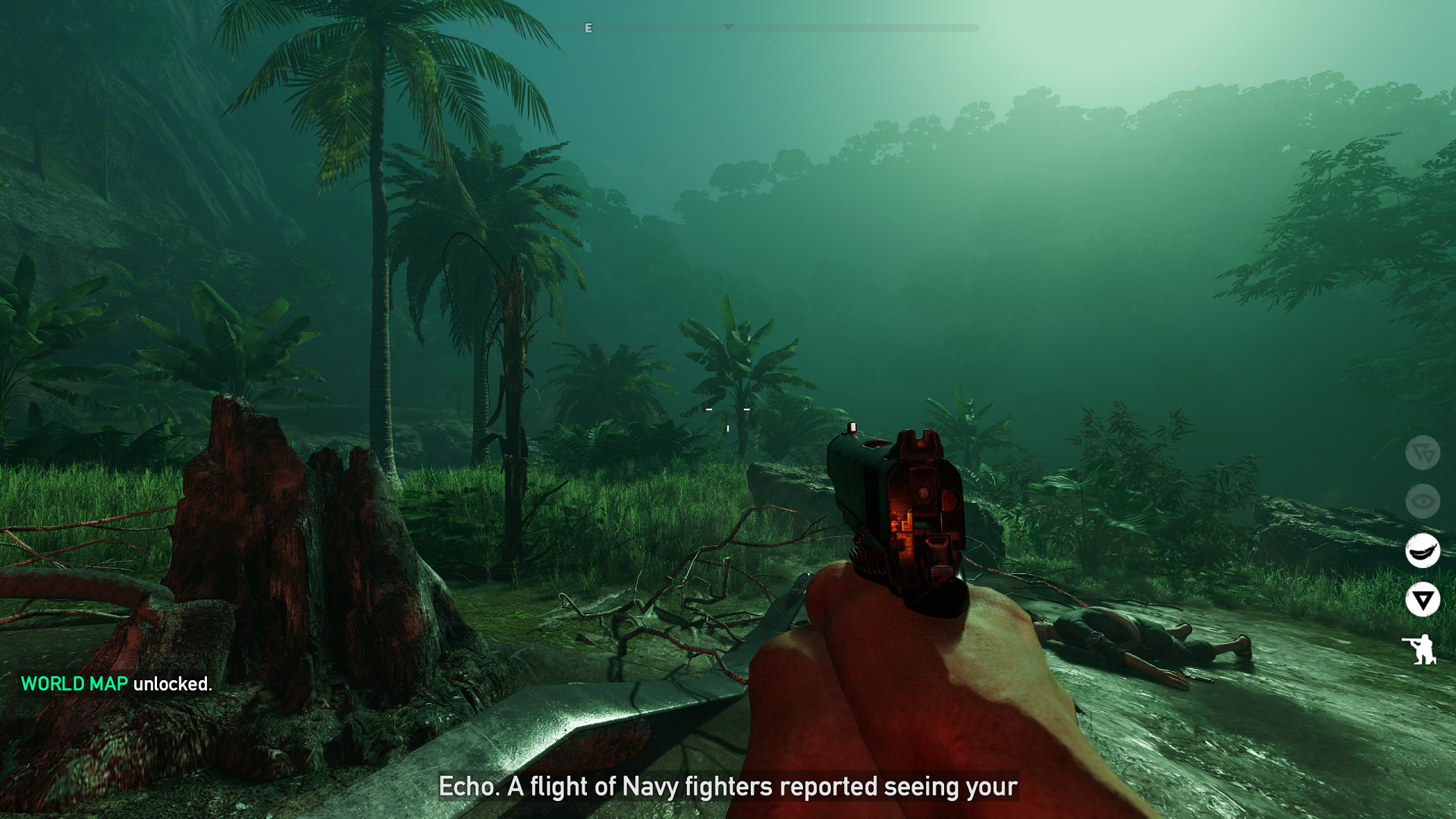 In starting the DLC, you’re put into Normal Mode without any option to select any higher difficulties. Upon completion you unlock two more modes: Survivor Mode which gives you less health and a smaller inventory for a more scratching and clawing your way of feeling. The other mode is the opposite end of the spectrum, Action Movie Mode which lets you call in airstrikes at will, without the need to destroy AA guns to clear the air. It also gives you the full four weapon slots to go nuts with.

On Normal Mode, if you take a straight shot to the end, you can complete it within an hour. However, your rating will be low. For every challenge completed, your percentage goes up. On my first run, it took me 3 hours and 23 minutes to get a 97% completion. I missed one POW that I couldn’t find, and in that time I had backtracked a majority of the map to the beginning to try to reveal that POW on the map, but simply couldn’t. I don’t think it was bugged, I just had missed where they were and didn’t want to retrace every step. This mechanic of having to find things instead of it just told to you adds purpose to completing the game fully rather than just getting the main quest completed. This is one of the smarter elements to this DLC that is underutilized. If anything, Hours of Darkness has made me wanting next month’s Lost on Mars and August’s Dead Living Zombies to be better and more fulfilling. Far Cry 5 is an incredible game that the Hours of Darkness DLC fails to live up to, story-wise. It does however exemplify how good the stealth can be if you play things right. This Vietnam story carries some weight, but none of it emotional to make it stand up to the main game in any meaningful way.