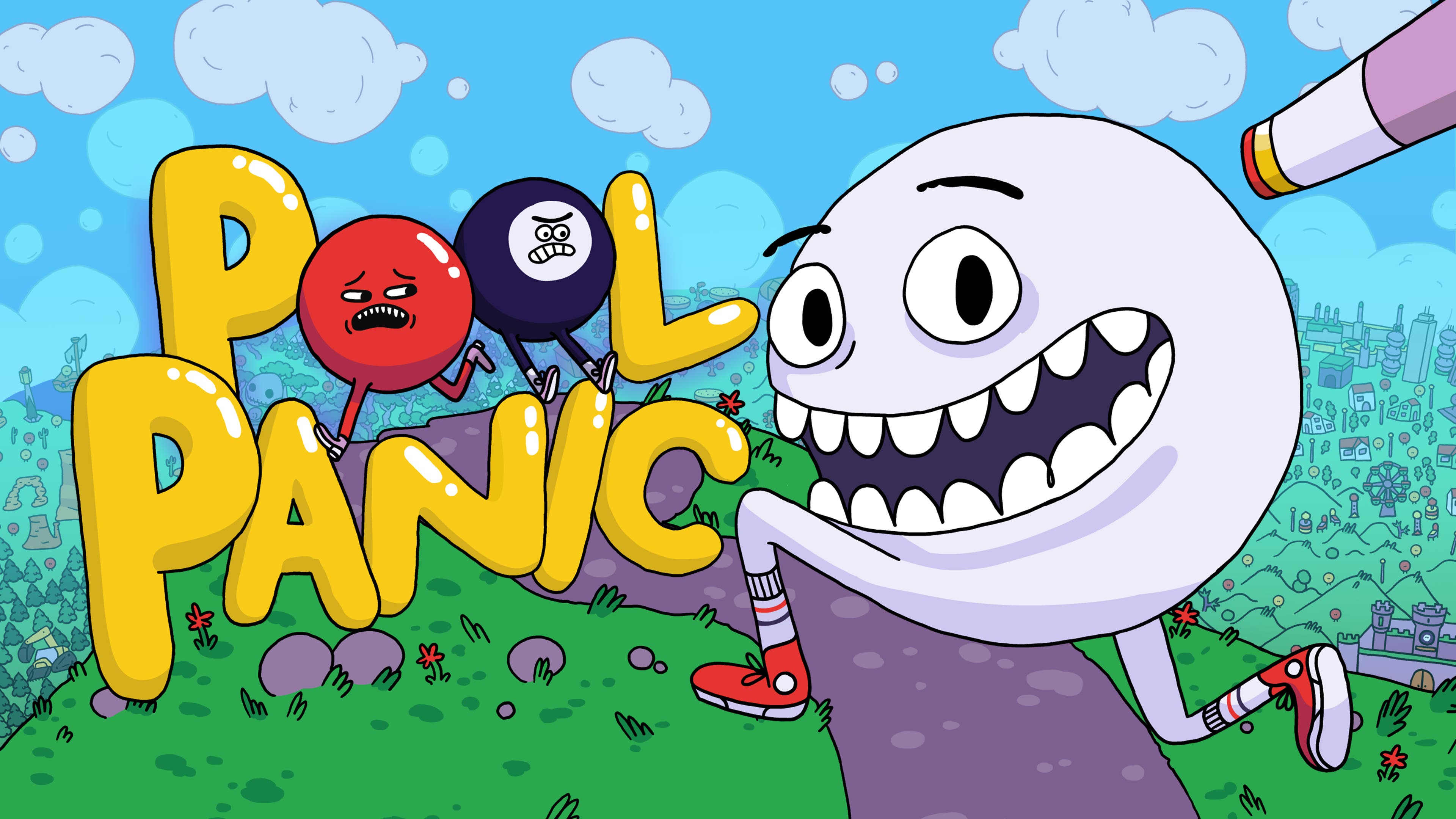 Pool Panic is the most bizarre and wildly fascinating games I’ve played in a while. This should come as no surprise when you see the publisher is Adult Swim Games. But what’s really interesting is, is the sheer amount of things to do. Like Golf Story, it’s not really about pool, but does use elements of it as its basis for gameplay. While it doesn’t have the emotional depth of that game, it does have the gameplay depth of it. You play as a cue ball himself, and send yourself to different areas and knock balls into holes. While that’s the basics, the complex nature of each level’s own twists and turns is like a puzzle to be solved. ♫ He’s got the pool world, in his hands. He’s got the pool wide world, in his hands… ♫ 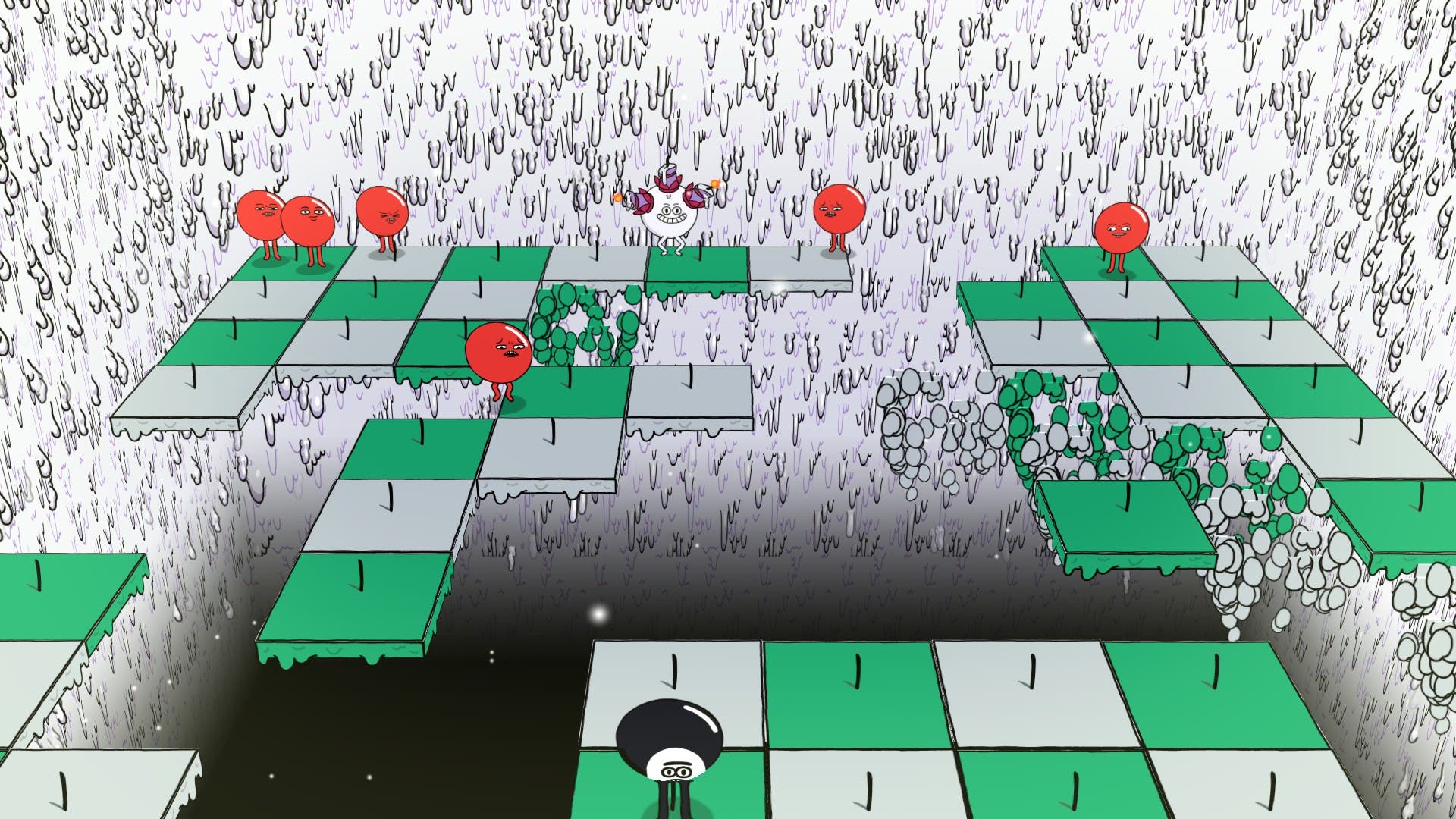 Pool Panic starts out with a tutorial to get you going, then you’re let loose into an open-world without a clue of what to do, or where to go next. It won’t take long to get your bearings, but once you do, this is a game that does not stop or slow down. Pool Panic is a game about billiards, but not. There’s misleading finesse you think you need, but the behavior of the enemy balls have certain personalities and quirks. Some will dodge your shots, and others blow up when you get too close. Some enemies are passive enough you can nudge them into a hole without even taking a shot. You can aim your shots with either a hard or a soft hit. Sometimes you need something in the middle, so analog power would be preferred. You know a shot will go to the hole when it lights up yellow. If you shoot yourself into a bad position, you can stop yourself and roll away.

You realize each level is completely random from one to the next. Each level has its own requirements such as: not going beyond the time limit, maximum number of hits, no scratch, and to sink all balls. There’s seemingly a near infinite number of different styles of levels. You’ll be fishing, engaging in wild west shoot outs, being part of mosh pits, disinfecting zombies, killing seagulls, and more. The game has a weird obsession with hats, and if you find them, you’ll be wearing items of the themed level. When you sink all the necessary balls, the 8-ball gets all sparkly which indicates it’s time to sink him. Once you do that, you jump in after him. And here’s where the game really shows its weird side, the end stage tally is lucid. Strange sound effects and visuals are all over, disorienting you as the game tallies up what you did in the level. 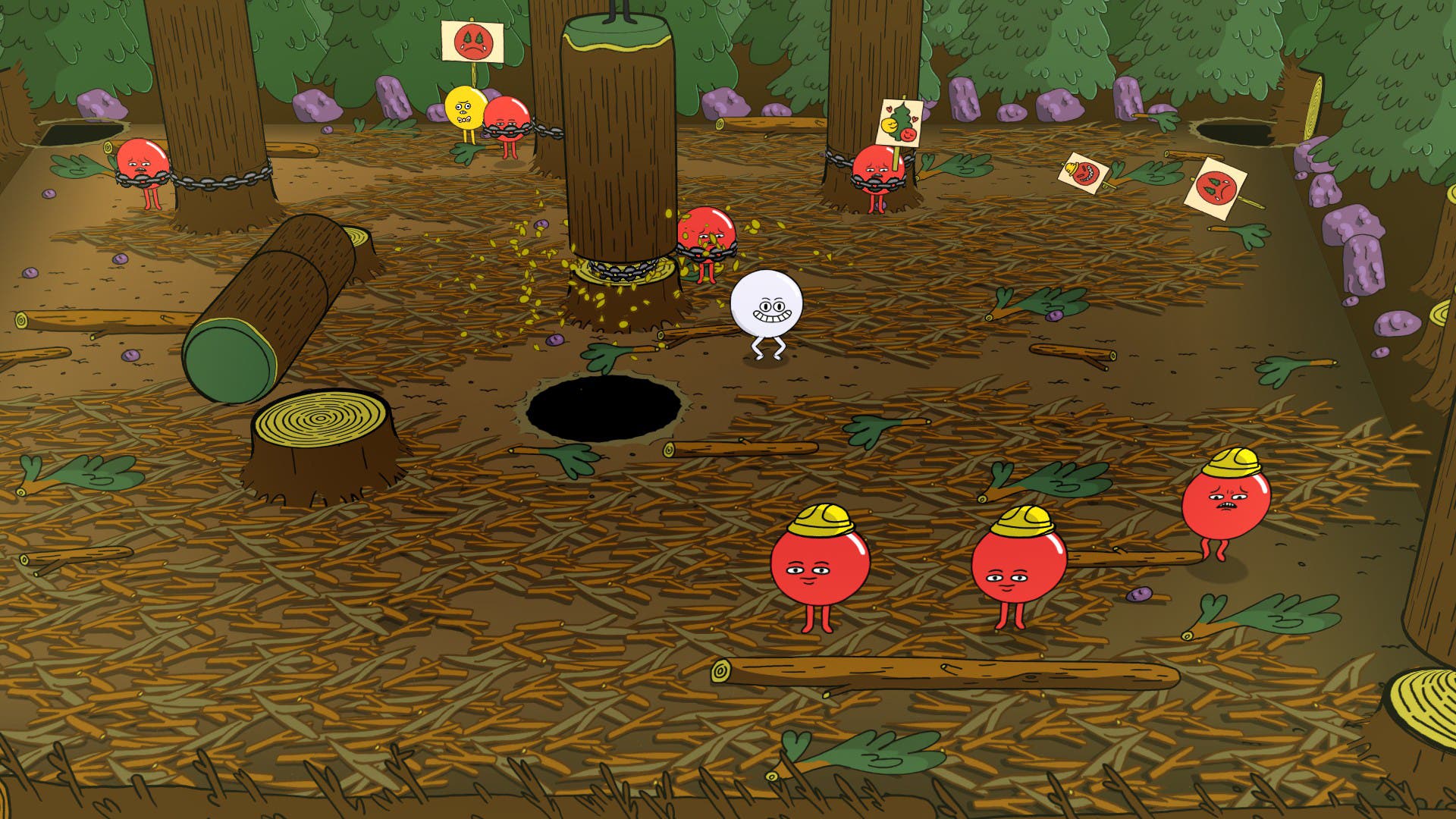 Pool Panic has overworld to explore, a sort of hub area that connects you to its 100+ levels. As you earn trophies in other levels, there is a center area that grows with progress, like the Tower of Babel. It takes just over 100 trophies for it to reach its fullest potential. Once the tower reaches maximum height, it unlocks the finale, and a new hard mode for the game. Given some of the basic levels of the game, which can be hard on their own, this is a scary proposition. Pool Panic‘s levels are only hard in the sense of figuring how to solve their individual puzzles to earn the trophies. 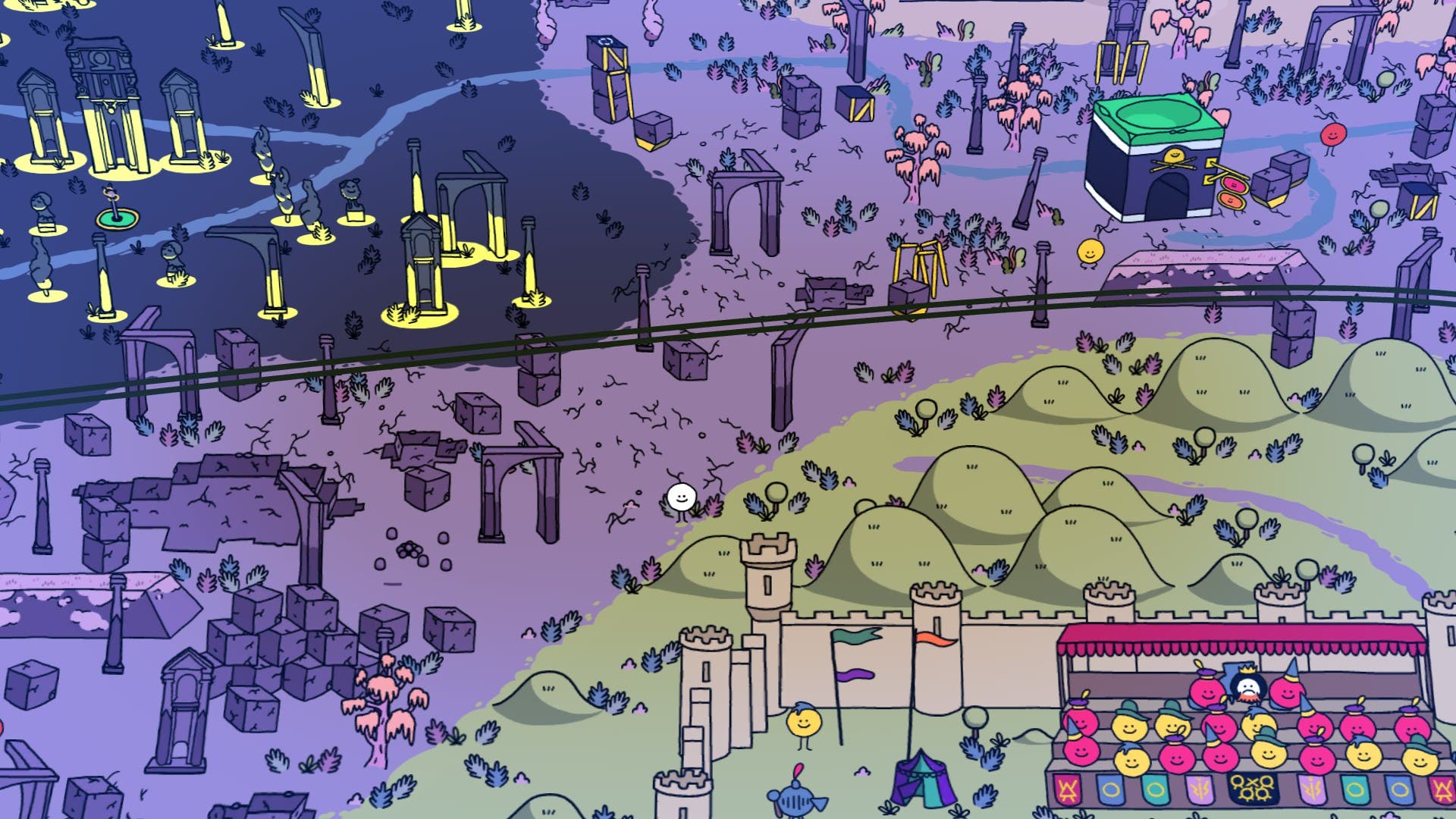 The game is full of surprises, there are some areas that aren’t always top-down. Some areas of both the overworld and levels where you’ll go underwater or into buildings that you don’t expect. But when you do, the perspective changes and it feels like a different game. I wish you could zoom the camera in or out, but it’s fixed and at times prevents you from seeing what you need to in order complete the level efficiently.

Pool Panic‘s soundtrack is quirky, but extremely repetitive. The limited options for the game has a toggle for the music, as if the developer knew this might be a problem for some. I like the tracks, but they are so short that having them start up again just is too distracting. The hand-drawn artwork is fantastic and unique in this game, giving it a truly hand-crafted feel. This extends into the multiplayer, where it is just as widely varied as the single-player. 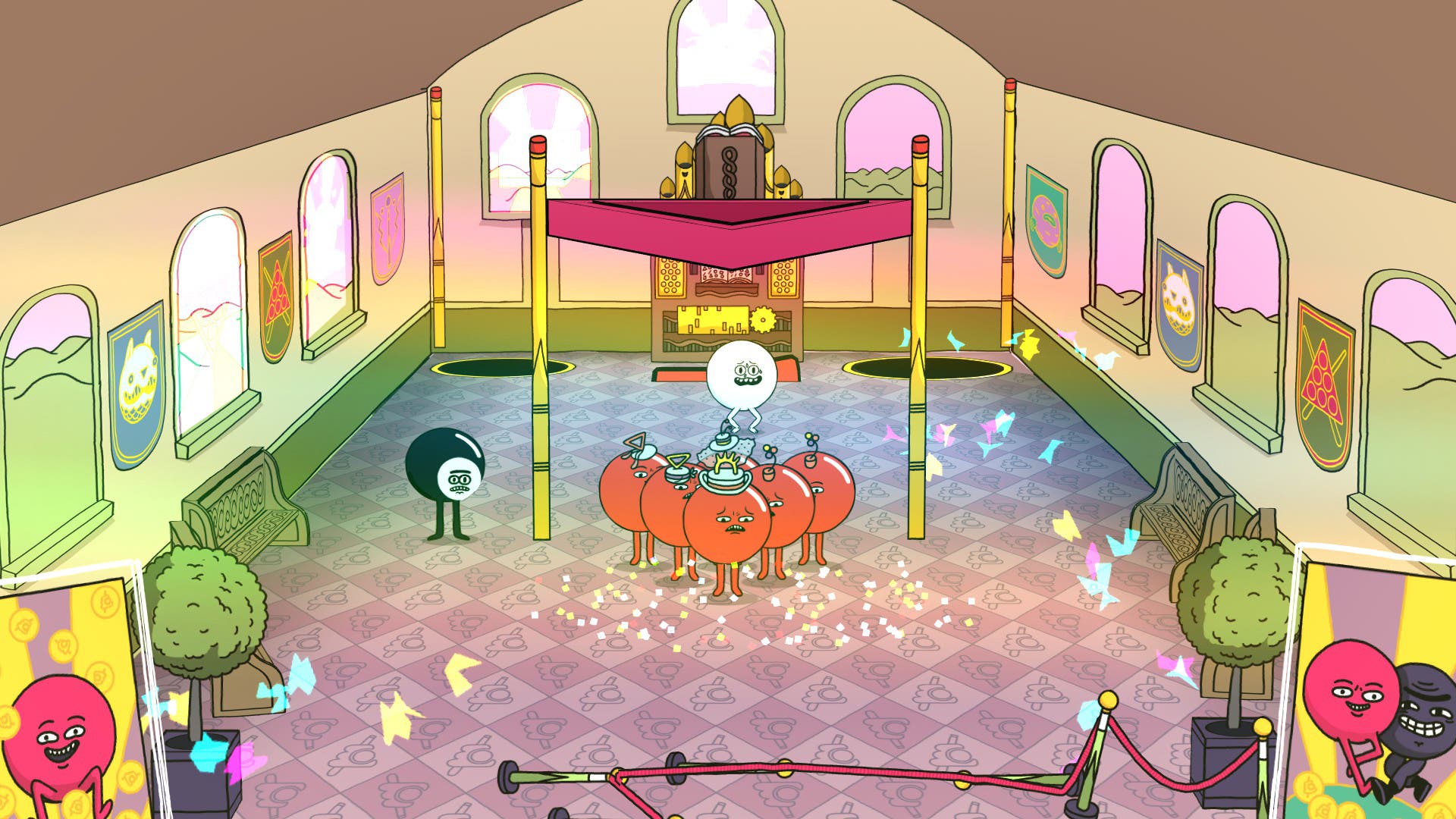 Pool Panic makes me question the developer’s sanity, but not having to go it alone is a huge deal. It’s got a swath of party modes for multiplayer. The singleplayer content is weird, lengthy, and where the game truly shines. True to the “panic” portion of the name, Pool Panic doesn’t know when to calm down. Remember in “Charlie in the Chocolate Factory” when Gene Wilder as Willy Wonka takes everyone on the psychedelic boat ride? That’s Pool Panic the entire time you’re playing it – and it’s awesome.