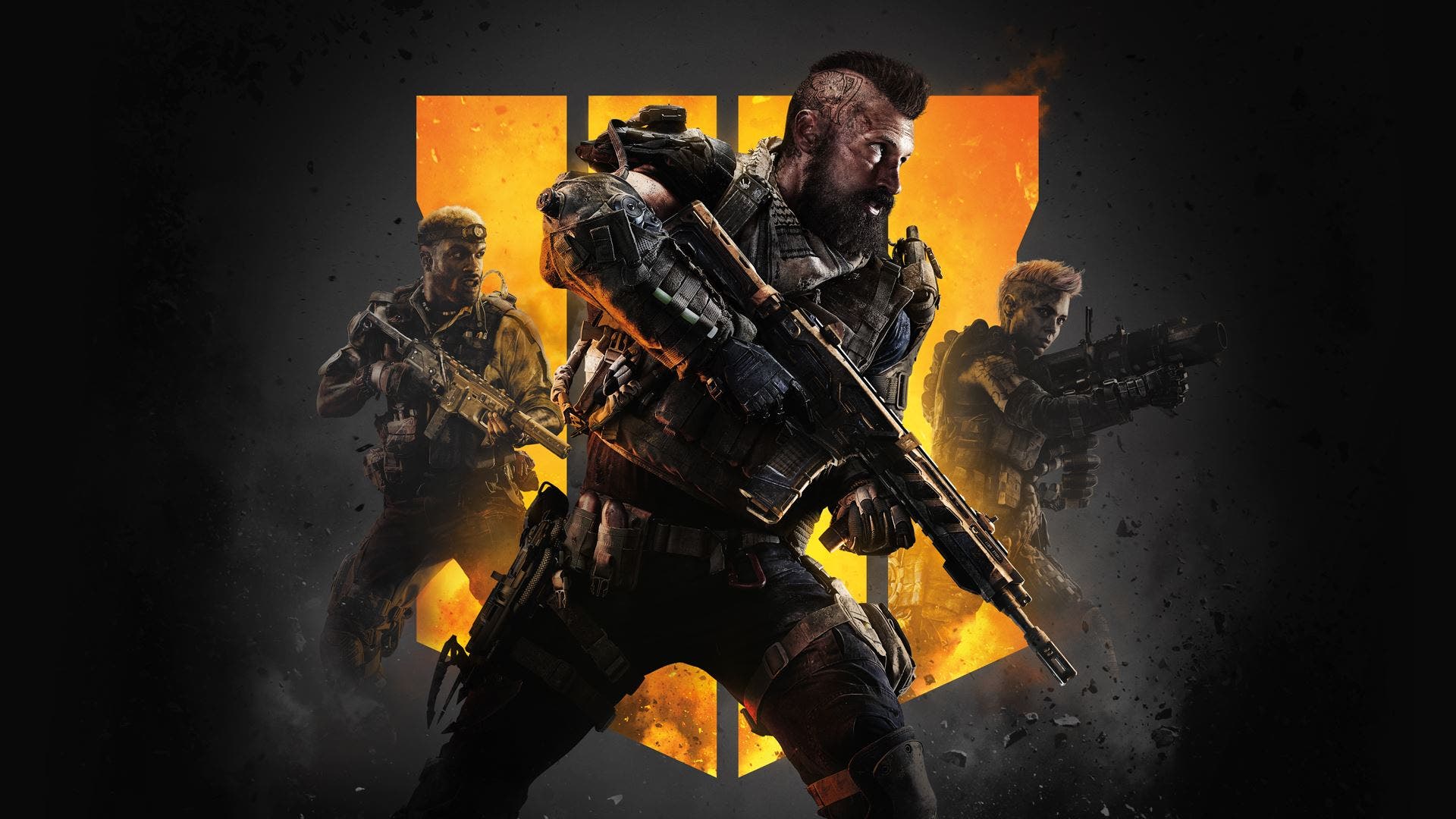 Treyarch comes back in a big way with the most successful and revered series of Call of Duty games, Black Ops. With Black Ops IIII, it’s a return to form after the mess that Black Ops III was. Treyarch fixes a lot of what went wrong over the previous entry, and Black Ops 4 feels like many steps in the right direction that future Call of Duty games will have a hard time following. It may not have a campaign this year, but Call of Duty: Black Ops 4 is a one-stop shop for multiplayer gaming. It’s got battle royale, traditional multiplayer, and co-op horde modes, making it a killer triple threat.

It’s not here. Treyarch abandoned a traditional campaign mode for a pseudo-story mode with Specialist HQ, which is essentially just a tutorial mode that teaches you how to play each of the game’s multiplayer operators, with some really well done CG cutscenes in-between. It’s worth checking out as it ties the previous games together in a way that Call of Duty: Black Ops 3 didn’t. ♪ I want to see it painted, painted blackout ♫

This is the highly requested, and anticipated battle royale mode for Call of Duty. This is the first time a AAA publisher and developer have attempted to take part in a genre that’s emerged in recent years. To anyone unfamiliar, it is an elimination style mode in which up to 99 other players all drop into a map to be the last one to survive. Along the way you’ll be collecting armor, weapons, attachments, medical supplies, and perks to aid in this mission. You can play this mode solo, with one, or with three other friends.

The map for Blackout feels unique and is the largest map for the Call of Duty series to-date. The scalability of the engine alongside the movement of the Call of Duty formula seamlessly work in tandem. There’s some really smart decisions about auto-equipping attachments, faster health applications, and improving jumping out of the helicopter and getting to the action that really speeds things up that only Call of Duty can do.

If you die early in a match, the game will unredact classic quotes you’d normally find in Campaign mode, but are here, instead. There’s a certain level of polish in Black Ops 4 as a whole, but Blackout feels leaps and bounds ahead of the competition. If there was a question as to whether a AAA developer could successfully make battle royale better, has been answered – and its name is Blackout. 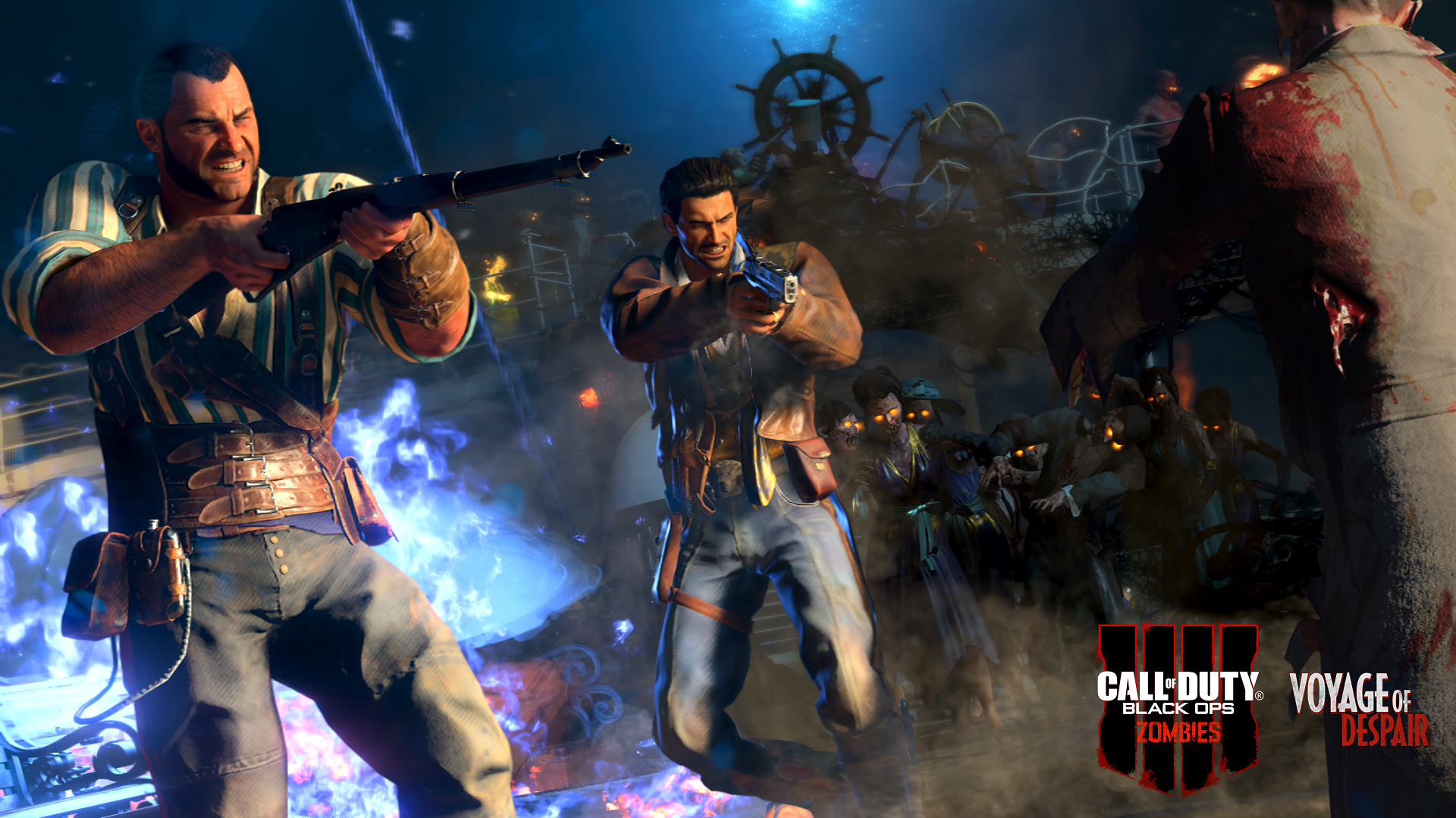 While it’s not been my favorite mode since its introduction, Zombies mode is back from the team that created it. I’ve never enjoyed the mode more. Offering two classic stories, CHAOS and AETHER paths. The maps on offer are great. My favorite is Voyage of Despair which takes place on the Titanic. There’s a bonus level of Blood of the Dead which is a returning favorite. There’s also one DLC map locked behind the Black Ops Pass. There’s plenty of zombies mode with the existing maps.

There are four heroes to play as, as well as four special weapons you can choose to wield, like a hammer, staff, chakram, and fire-breathing gun or whip-like sword. New to the series is Rush Mode, which is an arcade style mode that goes at a faster pace and is focused on points rather than uncovering secrets by completing quests to that of the Classic Mode. Despite the mode being around for years, there’s a beginner and advanced tutorial to get anyone up to speed, and enjoying zombies this year.

Zombies mode is so robust and offers a lot to do, that it could be its own game. I think I actually like this mode now? 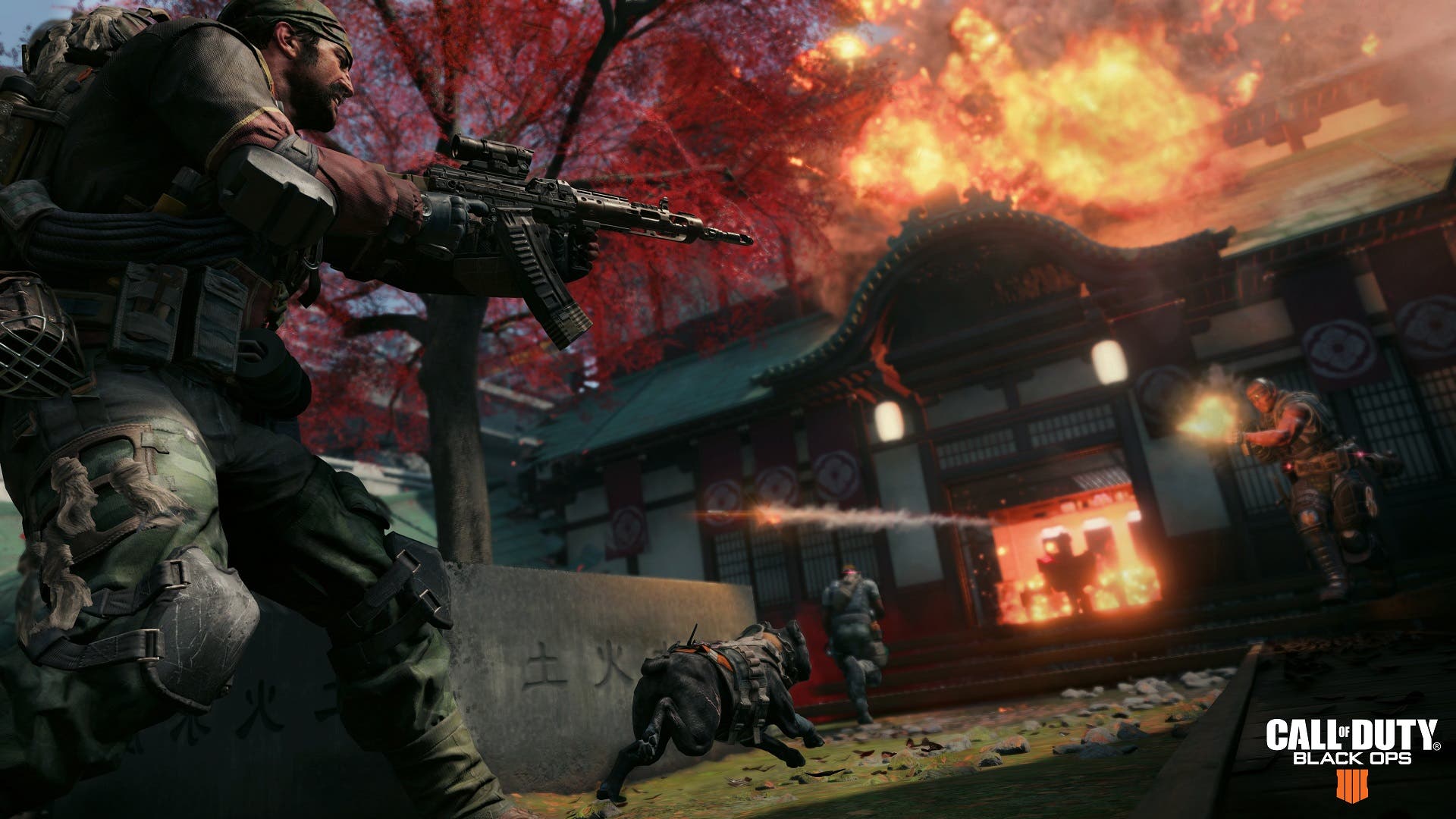 With the removal of jump jets, and wall-running, Black Ops movement feels more grounded and familiar than the series’ past few futuristic entries. Like an old friend, the “Pick 10” system Treyarch introduced with Black Ops II returns. It allows you to build a custom loadout any way you like, so long as you don’t reach the ten item limit. Weapons have levels, you have an overall account level, and there’s a near endless list of challenges to complete to help raising each of those levels. Multiplayer is designed for you to play for a long-time, and it really has legs and long tail.

Operators were introduced in Black Ops III, and they are back here too, for better or worse. They serve as heroes that have special equipment and ultimate abilities that are triggered over time or with performance. While most of the characters I’ve played as weren’t that interesting, I’ve got a good three or four I will bounce between depending on the map or mode that I’m playing. I don’t mind the operators in general, but I wish there was better customization options for making them more unique. There is a limit of two of the same operators per team, but even then, customization is just lacking for making them your own. 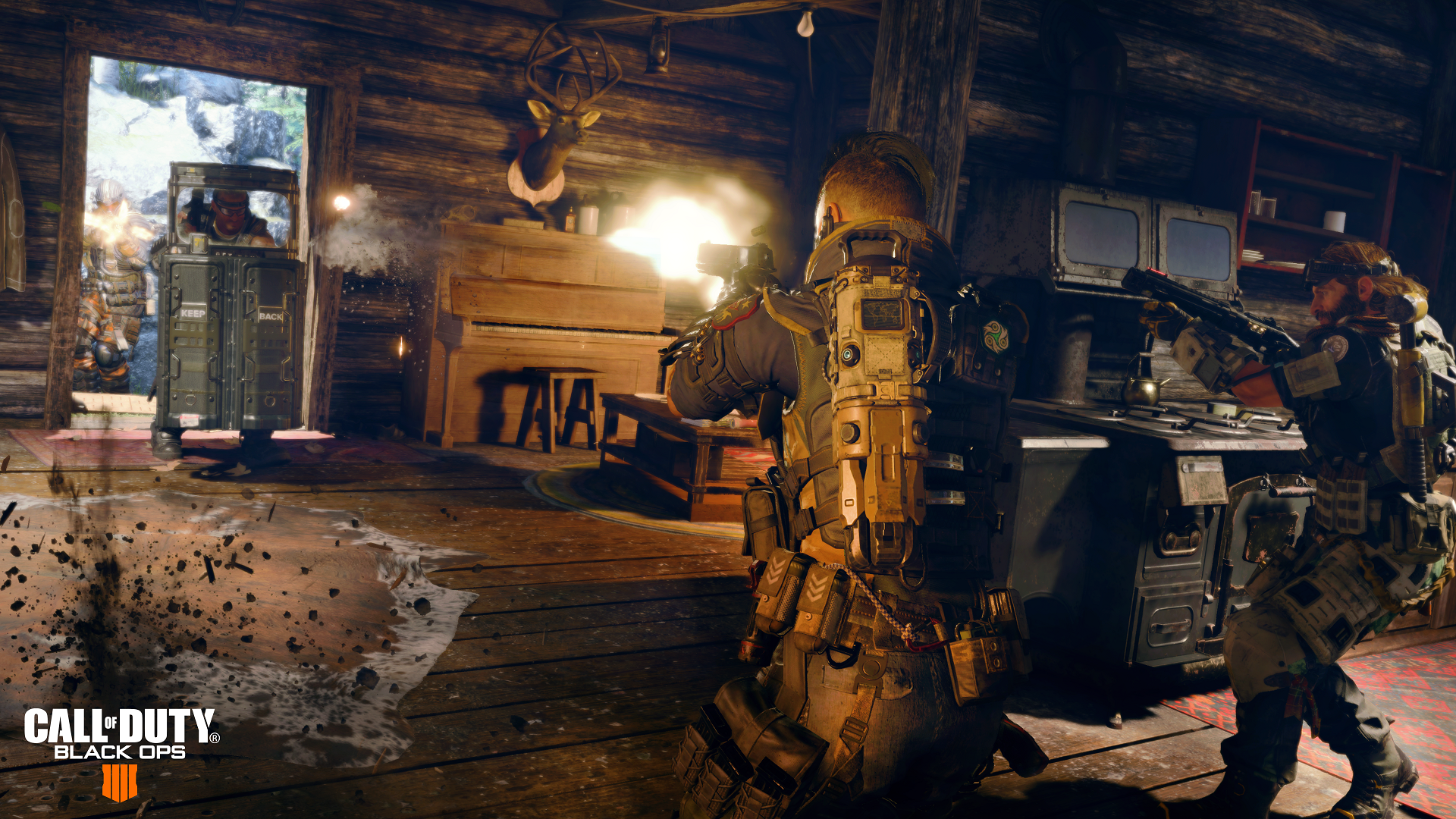 Replacing the final kill cam is best play, which to anyone who’s played Overwatch will find familiar. This system encourages better plays, and a more thoughtful approach to the game. The Time To Death (TTD) and Time To Kill (TTK) both seem increased this year, making it harder to kill others as it is for them to kill you. This is of course is different compared to sniper shots and scorestreak rewards. On the whole, Black Ops 4 multiplayer feels a lot more balanced.

Call of Duty multiplayer is defined by its maps. In a lot of ways, Black Ops 4 feels like Black Ops “Greatest Hits”. Making their return from Black Ops is Firing Range, Jungle, and Summit. From Black Ops 2 is Slums. And from Black Ops 3 is well, nothing – if that’s indication. Fan-favorite Nuketown will be coming to multiplayer in November. And it’s worth noting that there is a Nuketown Island in Blackout that can be explored, as many areas of Blackout mode reference older Black Ops maps. 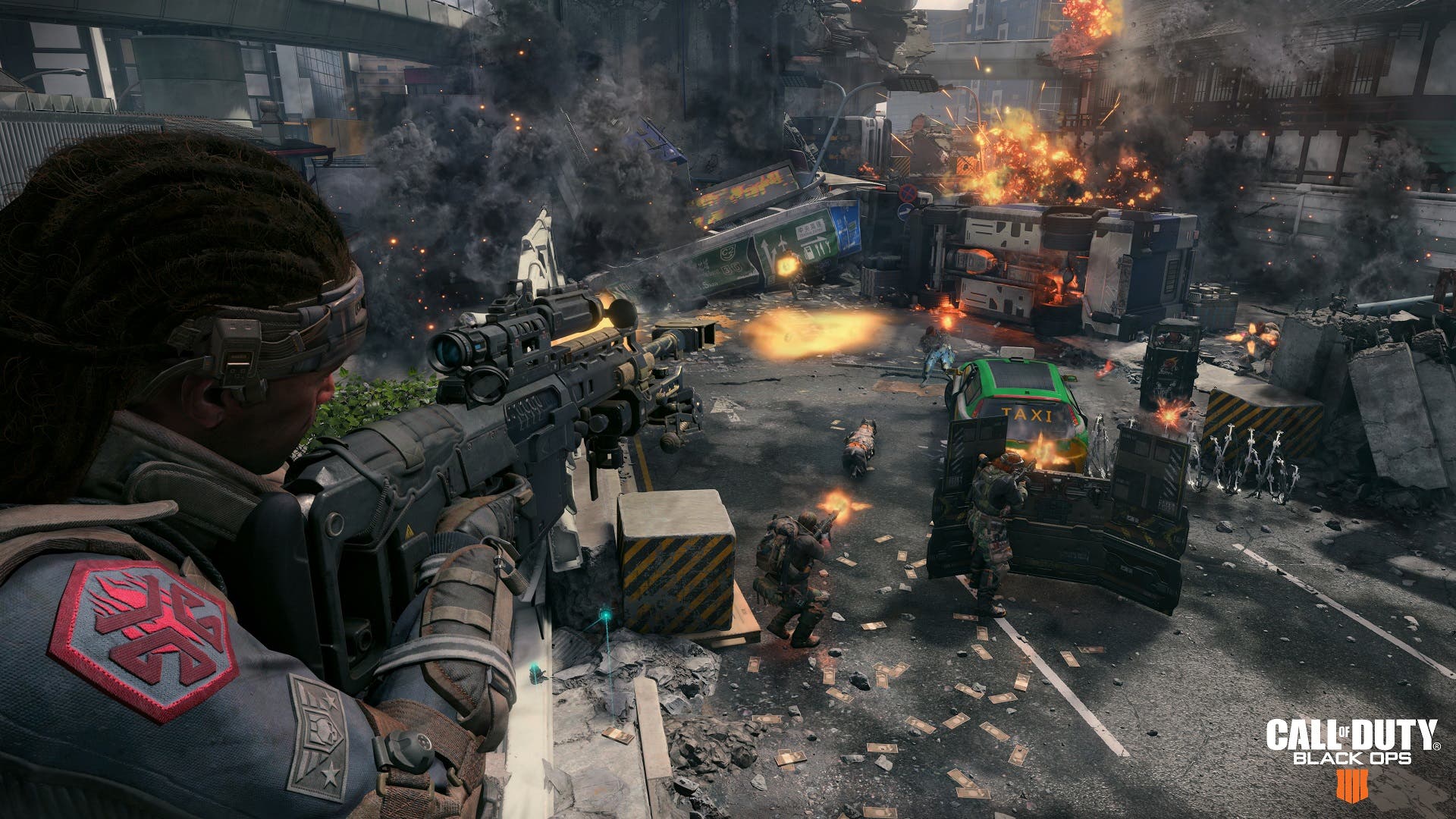 Treyarch eschewed one of the tent poles of every Call of Duty game since the original, perhaps boldly removing the campaign to make the game more omnipresent, accounting for all types of players who enjoy multiplayer gaming. The game now has three powerful modes that offers “something for everybody”. This was previously the case when campaign was a part of it, but there is somewhat of a shift away from single-player experiences, and the direction is shown here. Call of Duty: Black Ops 4 almost defiantly makes itself known as the ultimate all-in-one multiplayer experience to play – and does so with incredible confidence and execution.

A Battle.net (PC) and Xbox One code were provided by the publisher for review purposes