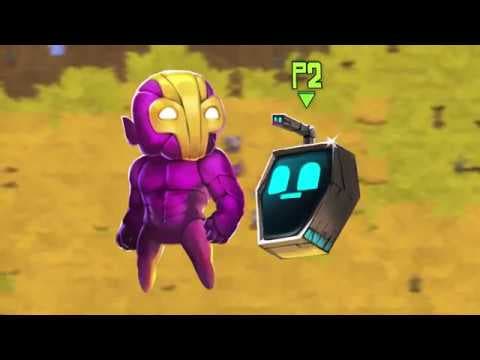 Flux’s day began like any intergalactic trucker’s: hurtlin’ through the stars with space-coffee in hand, ready to bring packages of joy to various worlds. Then some jerk named Hewgodooko teleported in, wrecked her ship in search of useful tech, and caused Flux and her robot assistant Juicebox to crash-land (wink wink) on Woanope.

Big baddies put the “nope” in Woanope, but Flux can carve out her own space to live while she prepares to get her tech back from Hewgodooko. Collect resources around the charming-yet-dangerous planet to build tools, structures, and weapons on a daring quest to save the entire galaxy…or just deliver your packages. For the first time you can bring a friend along; couch co-op lets your buddy play as Juicebox, helping with both combat and harvesting.

Crafting, taming creatures, and building a home becomes a meditative, chilled-out experience thanks to Crashlands’ infinite auto-sorted inventory. Erecting walls is as simple as finger-painting. Want some fancy walls and floors there? Done. A stable for new alien friends? Easy. Butterscotch Shenanigans even included muzak for maximum relaxation.

Woanope’s inhabitants are not the type to unwind, so Flux will need arms. Craft swords, hammers, axes, and armor, then augment them with trinkets to find hidden combos. Ever wanted to set an enemy on fire with a flamethrower while berserking with an axe, causing them to leave trails of fire on the ground, damaging other foes? That’s Crashlands for ya. Dancing the furious waltz of death means recognizing each enemy’s custom patterns and avoiding telegraphed attacks.

Flux’s trip to Woanope is an adventure across three huge biomes containing a 40+ hour Story Mode, NPCs, tons of sidequests, and big nasty bosses – all in a whimsical hand-drawn style. There is even Creative and Hardcore Mode for those who like to change-up their experience. It’s also cross-play with saves from the PC and mobile versions via Butterscotch Shenanigan’s Rumpus system. Oh, and it was developed by a trio of brothers in response to a cancer diagnosis. What’s not to love?

“Crashlands was therapeutic for me and my brothers to make while I was kicking cancer’s butt,” said Sam Coster, co-founder, Butterscotch Shenanigans “It’s a wonderfully wacky portal into our minds, and with the upcoming debut of co-op on Switch, we hope it brings your friends and family as much joy as it does our own.”