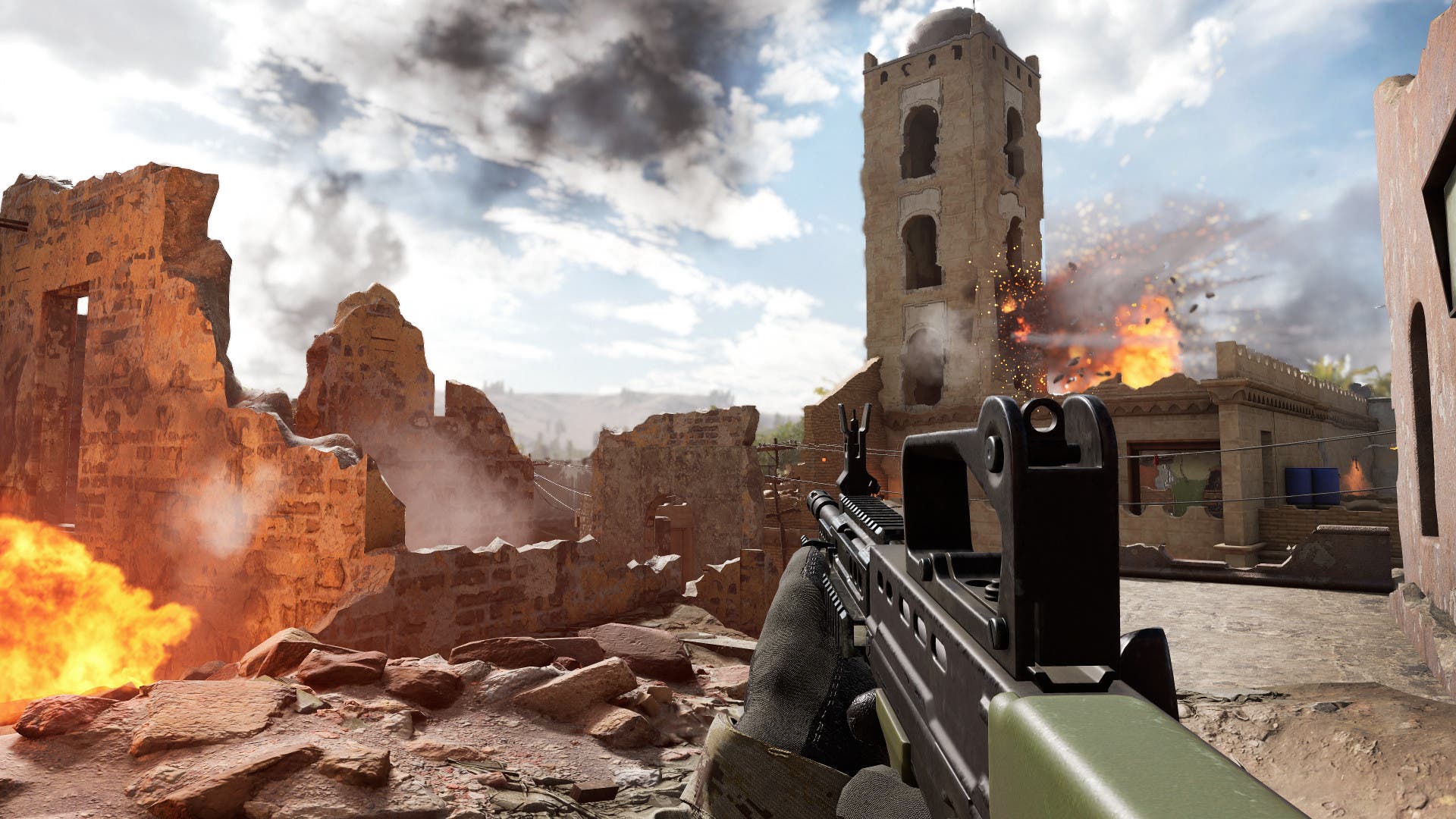 New to Insurgency: Sandstorm is the ability to call in air support, drive vehicles with or without mounted guns, and overall AI improvements. This works in concert with the reworked online and offline modes, which centers around multiplayer style objectives. You have three options to choose from: Local Play, Cooperative, and Versus. A ranked mode will become available at launch, but was not available pre-release.

Versus features three modes of play: Push, Firefight, and Skirmish. All three modes are great, each with their own unique traits that make them worth playing. With Push, is where you make progress through the map by capturing points, which adds time to the clock and respawn waves for your team. In Firefight, there’s restrictive loadouts and no firefights, and players must hold all positions or eliminate all opponents to win. And in Skirmish, this is larger scale maps where vehicles spawn, that feels like a combination of Push and Firefight, but bigger. I found myself partial to Push, but playing with whatever was open was an exciting challenge. 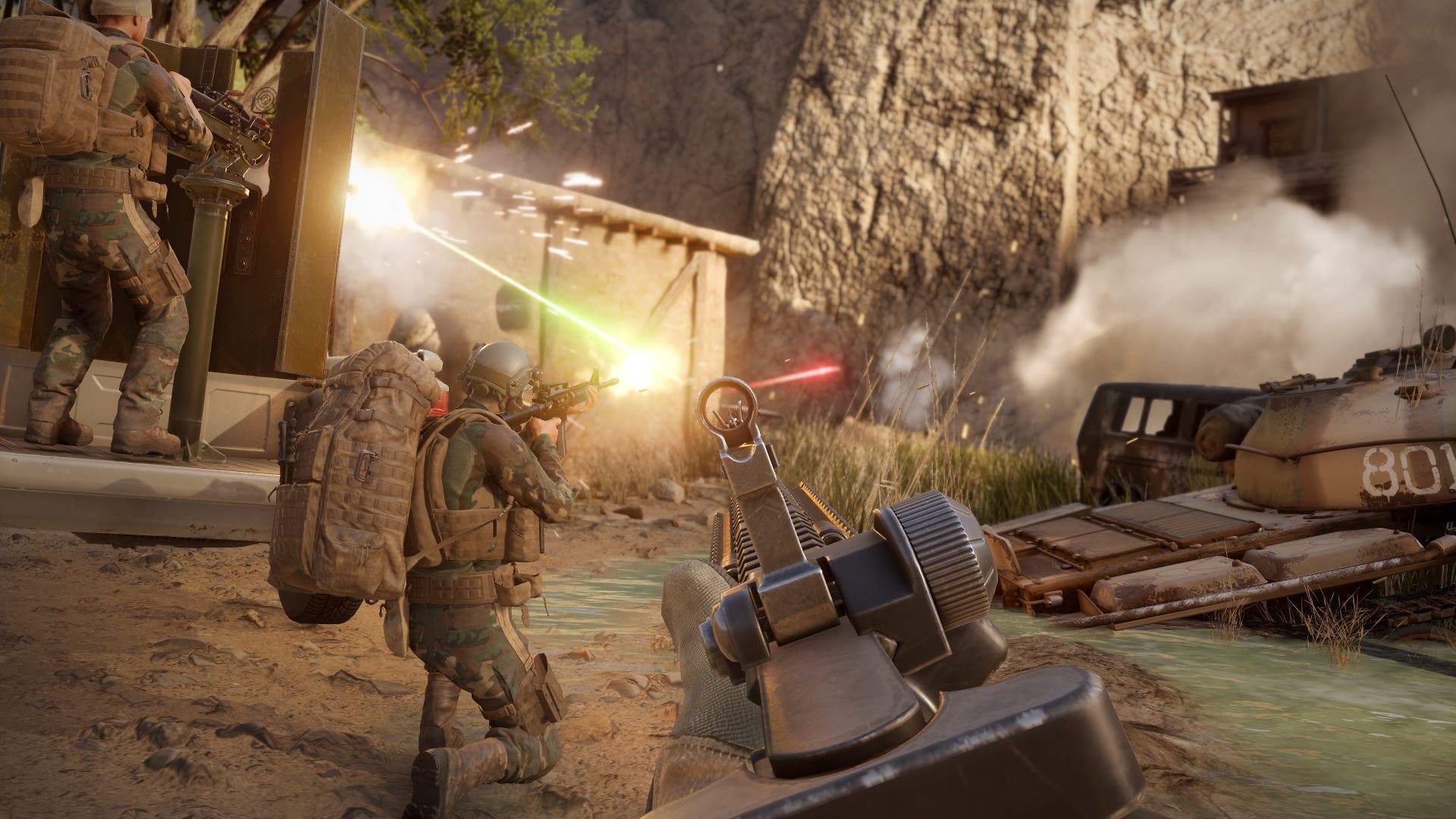 If you want a more intimate affair, cooperative for up to 8 players is possible. Local play and online Coop share something in common, in that they are a bit bare bones. Local play allows you to experience Insurgency: Sandstorm as a solo player with AI teammates and fight against AI opponents. There’s two modes listed, but it’s the same mode and a variant for each side of the conflict.

All modes of player are constant tug of war struggles, in which either side is pushing or repelling the other. These attack and defend game modes offer up some really intense matches in what can be a really short amount of time. In local play and coop, you see the kill feed against the AI. In versus however, the kill feed is nonexistent, for a more immersive experience. To that end, teammates will spawn together in reinforcement waves or when completing objectives. Be a clutch player and spawn your whole team back with a single objective capture, and for the most part you’ll not know how close you were to the edge until you succeed or fail. 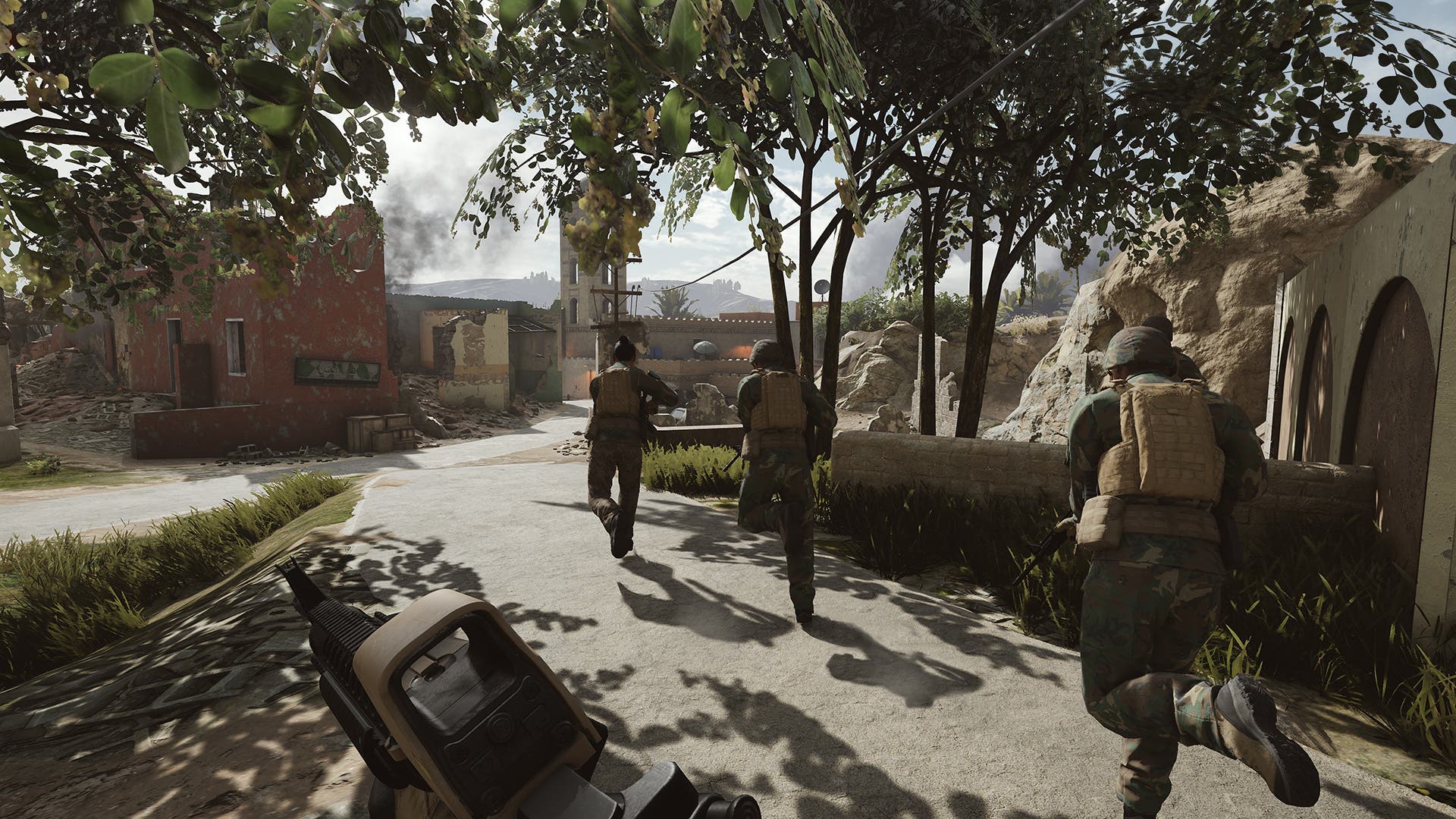 Insurgency: Sandstorm doubles down on the realism and accuracy in every aspect: movement, ballistics, and rules of engagement. For starters, you’ll not find a GUI that tells you where the center of the screen is with a reticle. You can bring a laser sight to help compensate when hip-firing, but aiming down sights is usually the best. After all, life doesn’t have crosshairs. Teamwork in Insurgency: Sandstorm is a must in order to be strategic and tactical, and communication happens via radio chatter complete with distortions and effects. For the first time in a long time in a first-person shooter, smoke grenades serve a real purpose in masking movement and is a necessary item to carry. Cover is defined as hard and soft cover, with different levels of bullet penetration based on the weapon firing into it. With a minimal HUD, you don’t always know how much ammo you have left, so if you hold down ‘R’, instead of reloading you’ll pat yourself down and check your ammo. It’s touches like this that really carry the game. Lastly, fragility of yourself, your team, and the enemy is on equal footing. You can go down in as few as a single shot, and only as many as three or four. Being cognizant of your surroundings, angles of fire, and placement lets you live a little bit longer.

The sound design of Insurgency: Sandstorm goes above and beyond. It creates incredibly tense and fantastic situations for your ears to ever listen to. These spatial noises give you every piece of information about enemy position, whether above or below you, as well as telling you what kind of weapon is being used. Some noises are just plain rude, from shotguns to mortar fire. Even the sudden kicking of a door can rattle any player. The visuals now running on Unreal Engine 4 produce some beautiful skyboxes. Now you can see tracer rounds and track them to their origin. And when using scopes, your position relative to light sources can affect your visibility using the scope. There’s so many details packed into this game, it’s incredibly high quality in every way.

Insurgency: Sandstorm features a class system for all of its modes of play. The Commander has a team limit of 1 player in which they can call in fire support. However, the catch is that they must be near one of two Observer classes in order to do it. The Rifleman has unlimited players and is a general purpose player that uses assault and battle rifles. The Breacher has a limit of 2 players and focuses on close quarters using shotguns and SMGs. The Gunner is limited to 1 player who uses machine guns that can both be deployed and carried freely. Demolitions also has a limit of 1 who focuses on explosives and rocket launchers for anti-vehicle play. The Advisor is limited to 2 players and uses exotic weapons not seen elsewhere on the team. Finally, the Marksman is limited to 1 player on the team who uses sniper rifles. Having limitations on certain classes introduces balance, but sometimes frustration for players who’ve found a specialty that’s no longer available to them.

Customization makes its way into the game, allowing you to create a male or female soldier of your own making. In a match, you can create a specially designed loadout based on the class you’re playing. You have a limited number of supply points to use. You can choose to take more armor, and will move slower but have more protection. It doesn’t prevent headshots from doing the job, but keeps you more survivable from others hits. Or you can take more grenades for attacking and defending, but limits the attachments that can go on your weapons. Each loadout is tailored to each faction, and you can save your loadouts for each side. These decisions can be changed at any time, but early mistakes in what you choose can hurt the team in the short term. 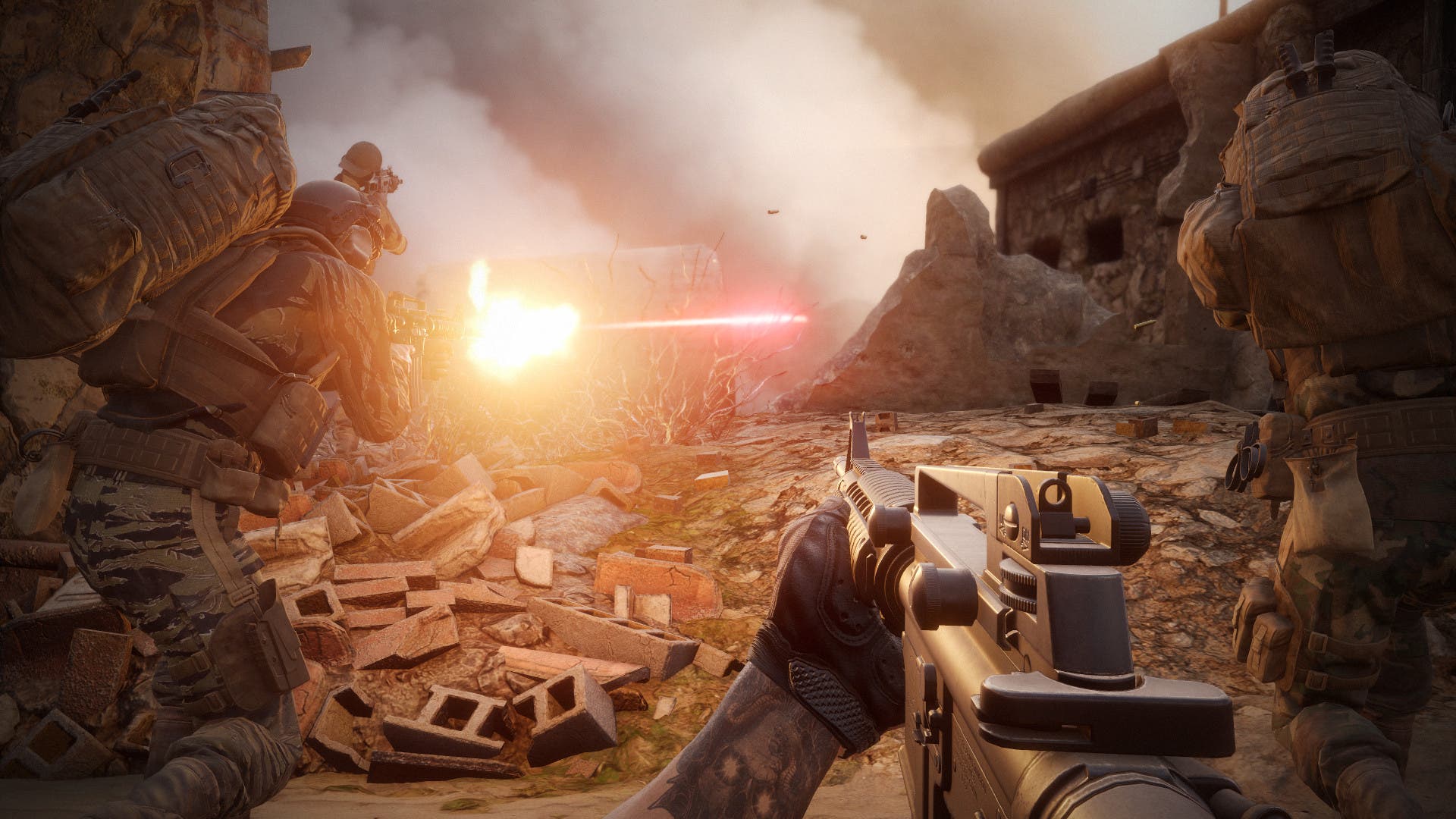 Developer New World Interactive have plans for post-launch support, and possibly a campaign in the future. There’s a limited number of maps and modes here, but there’s a lot of game all the same. Insurgency: Sandstorm is heart-pounding in every match and mode, and there’s little room for error. New World Interactive’s vision is unmatched, though notably niche. You’ll not find another first-person shooter in a hardcore setting than what Insurgency: Sandstorm provides.