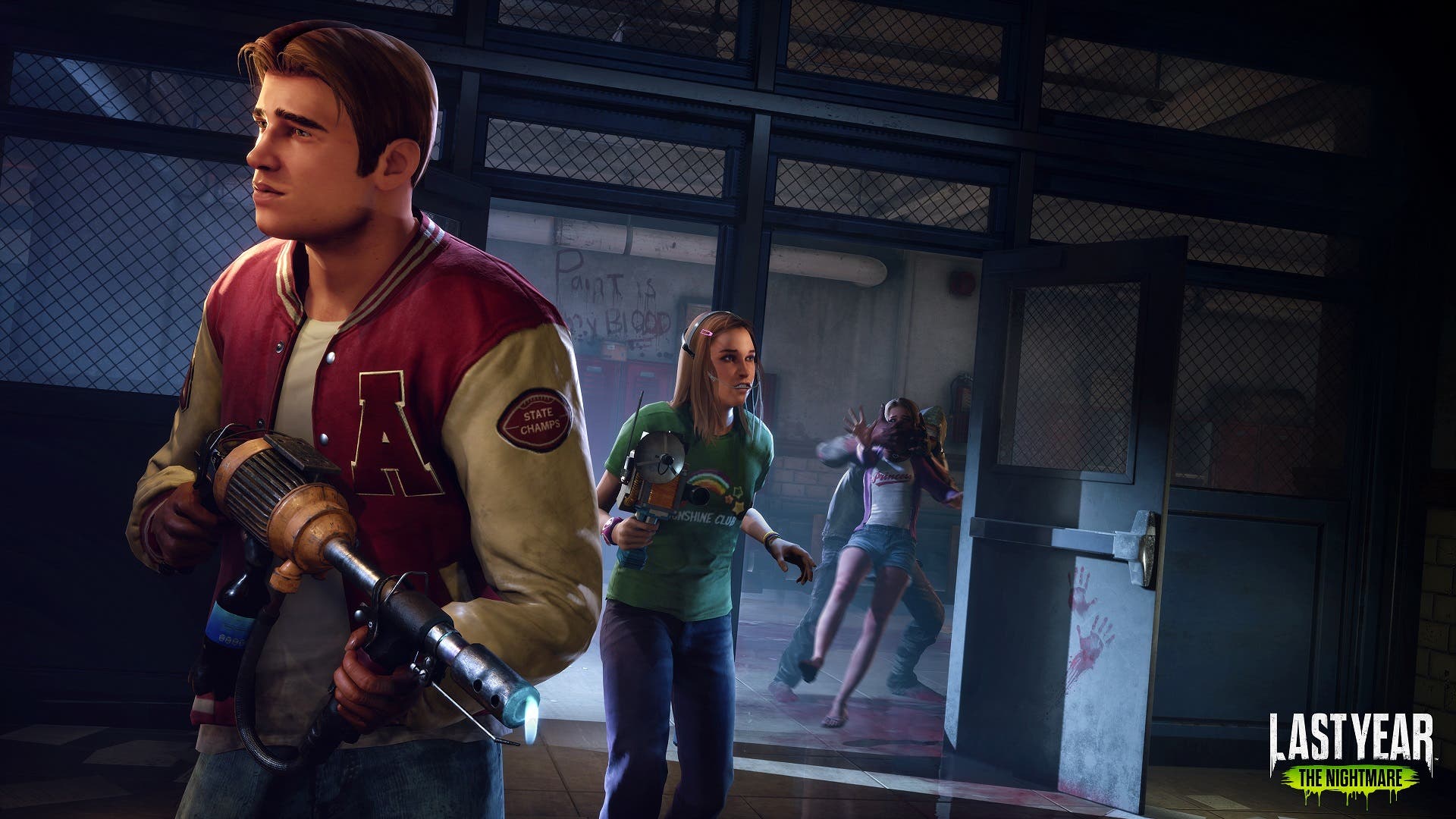 Last Year: The Nightmare is the result of a successful Kickstarter that ended four years ago, and that success continues into the released product from Elastic Games. This is a 5 vs 1 asymmetrical multiplayer game where five teenagers must escape different maniacal forms of a serial killer similar to games that have come before it, but Last Year has enough twists and surprises to make it a cut above its competition. Last Year: The Nightmare a classic in the making, and the backbone to its horror doesn’t rely on any established material to be as good as it is. 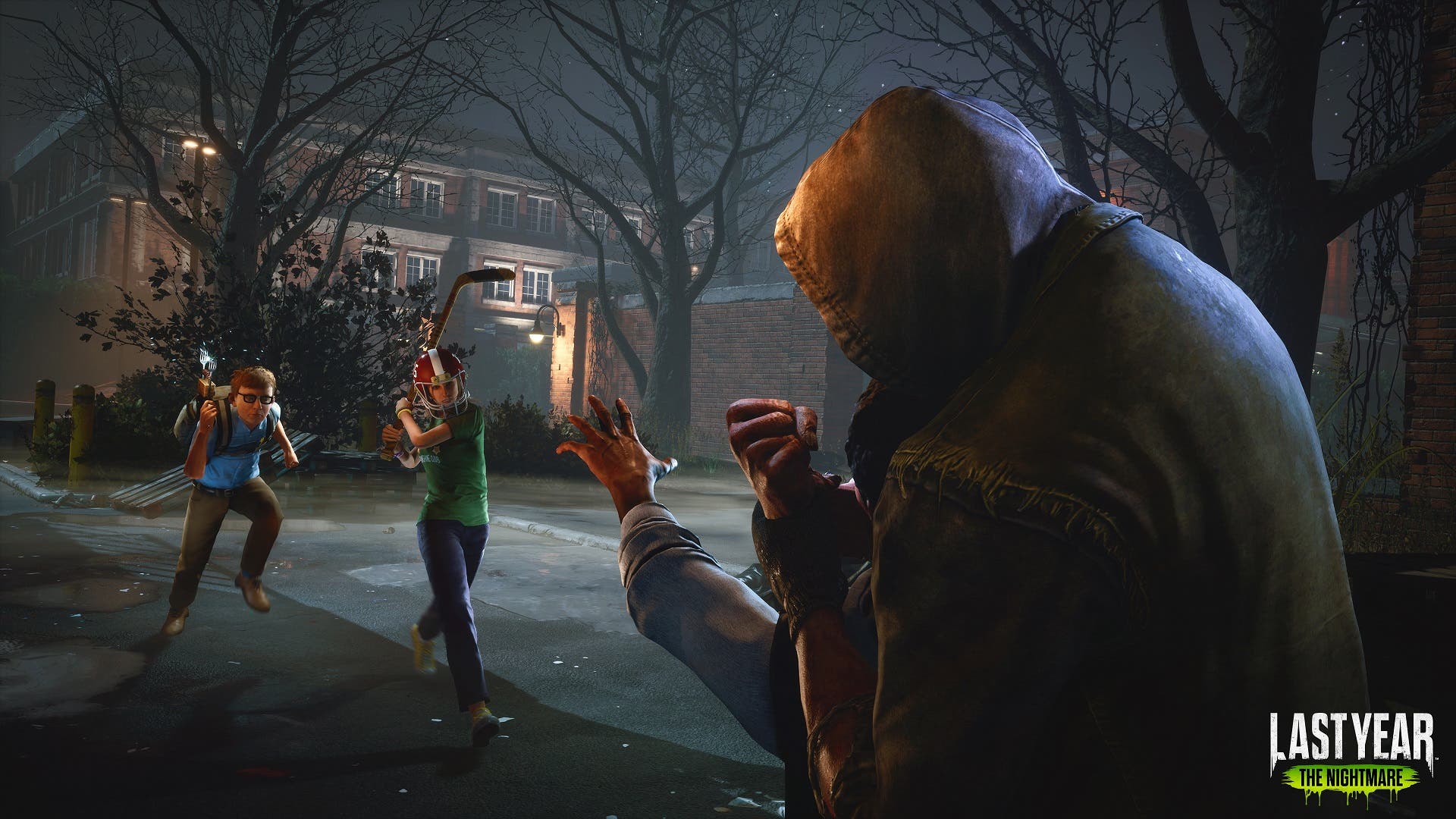 Last Year: The Nightmare is set in the technologically advanced year of 1996 on Halloween night, and takes place in a supernatural reality, an almost dream-like state. I do wish it was portrayed as real-life, but as it is doesn’t hurt the vibe it has going. Lobbies consist of six players, and tasks them to pick one of five playable high school characters: the jock, the nerd, the popular girl, the cool kid, and the geek. While it is cliched, they are the perfect way to represent the different characters. This unified lobby will either pick one of the players to be the killer at random, or players can opt-in to be the killer. If multiple opt to be the killer, one will be chosen at random from that pool.

Once killers and survivors have been decided, players can then choose one of four classes: Assault, Medic, Scout, and Technician. This leaves room for one player to select to be a second of the same class. There is a limit of two characters per class, for balance and benefit of the team. The assault class is combat focused, and designed to hold off the killer as long as possible or to the death. The medic is clearly the healer, and not meant to engage in combat directly, the scout detects the killer and can temporarily blind the killer, and the technician builds turrets to slow the killer at every chance they get. Crafting is a big part of the game, and there’s a limited amount of items in any given area. While it’s great for players to stick together in the early going, this means scrap is equally sparse for all players, and has to be split among the party. This reduces each player unable to craft upgrades and additional gear at a faster pace. There’s numerous weapons and items to craft, often dictated by the selected class, but all offer buffs, weapons, and improvements to your starting gear. Teamwork is what makes the dream work in Last Year: The Nightmare. 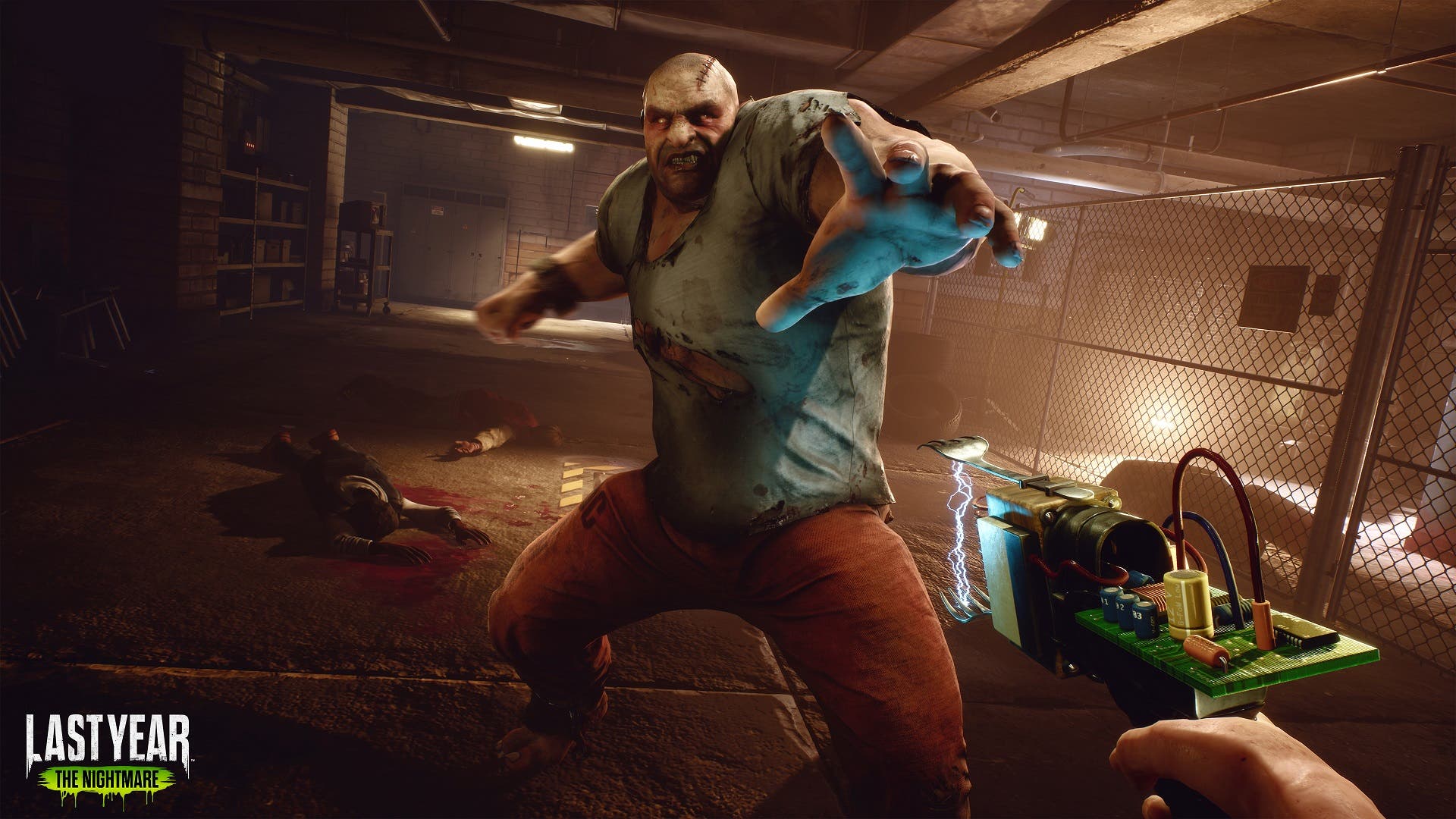 On the flip side, the one chosen killer can select between three psychopaths: Giant, Slasher, and Strangler. These names equates their movement to be slow, medium, and fast. Each character has a specific set of abilities that you cannot change. Last Year is about the supernatural, and the killer at any time can go into Predator Mode. Predator mode allows the killer to essentially take a spirit form and move freely about the map quickly and easily. They can bring themselves closer to the group, or get to their objective first. Along the way they can place grenades in scrap to damage players over time, or place traps on the floor in annoying fashion to incapacitate stragglers. This mode changes the game, with the caveat that the killer cannot leave predator mode within view or too close to the survivors. This consideration is appreciated, and keeps this mode from being game-breaking. It’s incredibly fun, and gives the killer awareness they wouldn’t otherwise be privy too.

There is a twist on the formula of the horror asymmetric multiplayer when it comes to dying, as death is not the end. The killer can change forms between deaths, allowing them to surprise the opposing side and change tactics based on their location and how close they are to their goal, always keeping the survivors on their toes. Similarly, survivors who have been killed can be revived by retrieving them from a closet, which the killer can use as bait. You then strategize when to release a teammate or what killer to choose upon death allows players on both sides to think more tactically. Elastic Games’ choice to extend the gameplay and not be an “elimination” style match is really smart, and allowing you to change classes or serial killers really mixes things up and has you thinking all the time. 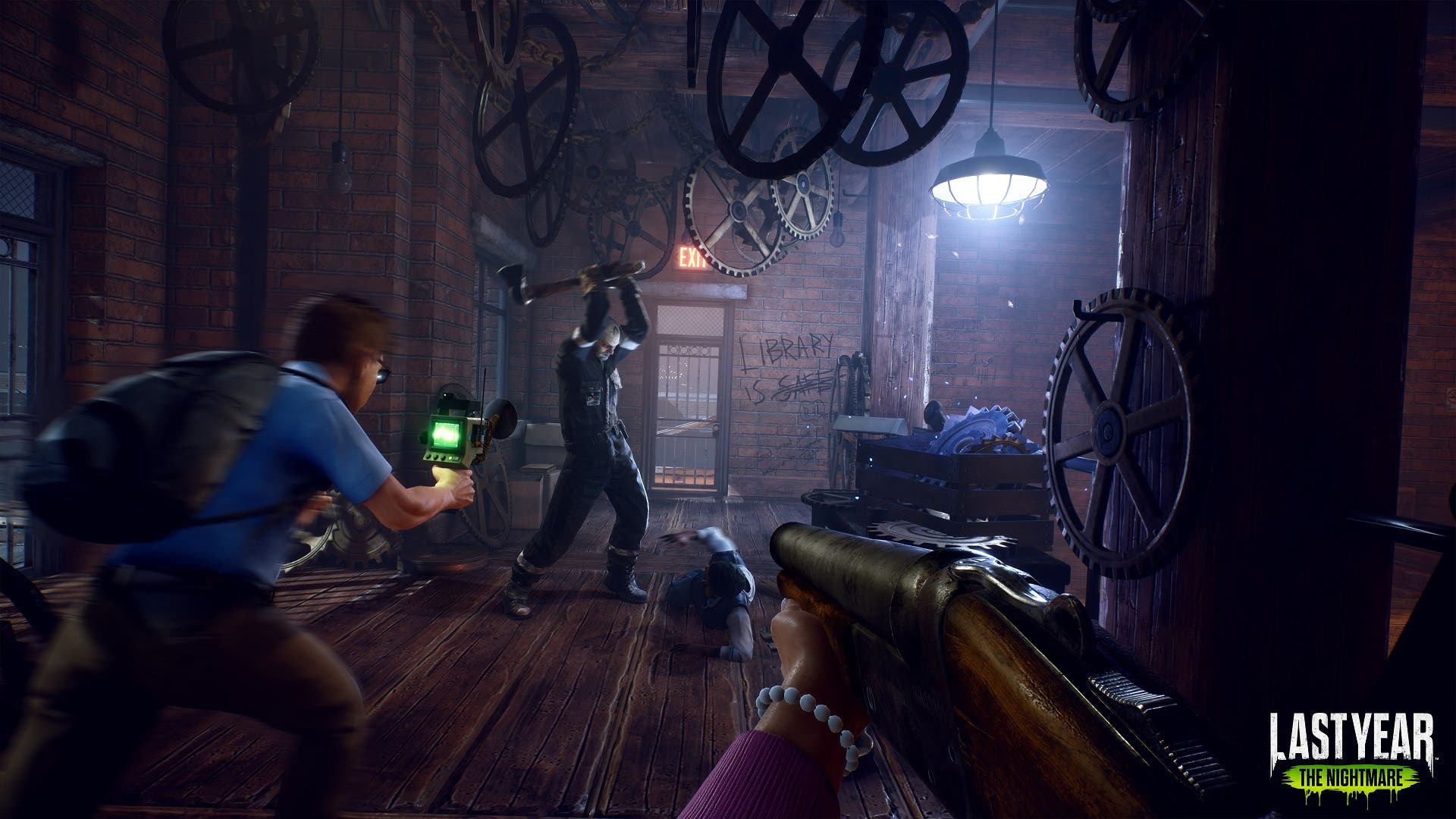 Each level of the game offers three to four steps towards escaping to win. The early-game is about understanding the map and as finding as much scrap to craft items and upgrades. The mid-game is about finding out who the killer is, and what their abilities allow them to do while you complete objectives. The end-game is opening the escape hatch, but the catch is that it closes in sixty seconds, so you have to ensure that all survivors are together and within range to successfully escape, otherwise you’re locking them out. Success for survivors is metered by how many are able to escape within the time period, and success for killers are getting at least four of the five kills, if not all. Right now, there’s no character progression or experienced doled out the end of the match, but that’s slated for future updates coming in 2019.

At the time of launch, there are only three maps: The Bell Tower, The School, and The Library. While the number of maps available seems sparse, it actually lets you learn the maps better this way. You’re may repeat a map from match to match, but your understanding of locations benefits either the killer or survivor you’re playing as. I learned that Last Year: The Nightmare has generous fall damage, letting you fall a single story without any damage, but more than that and you can take fall damage, and even be knocked down requiring a revive from a teammate. Matches are begin and end with really well done cutscenes that are based on who survived, and who didn’t. 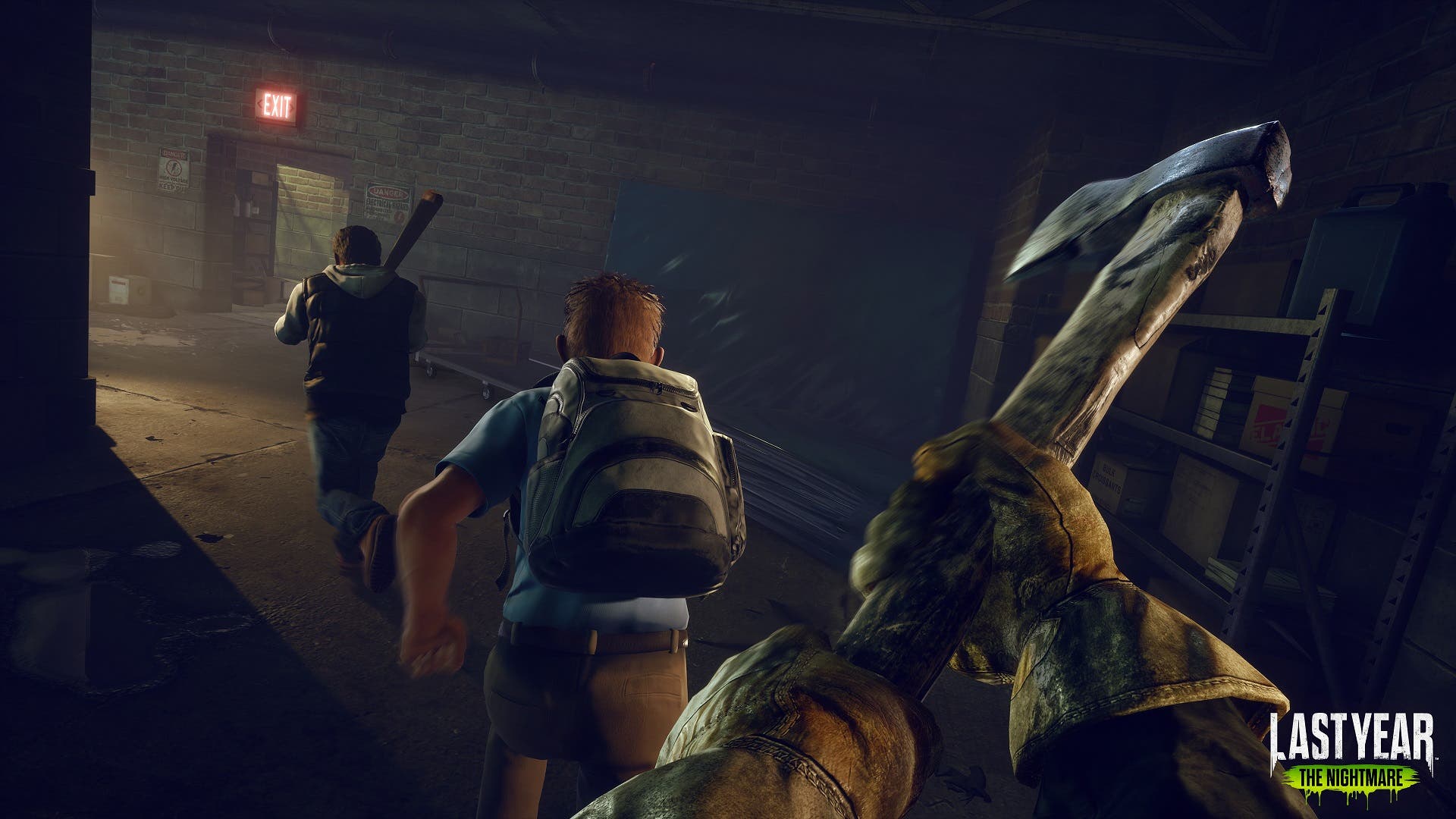 This starting off as a Discord Store timed-exclusive, allows for some special features and bonuses playing the game. It has Discord’s rich presence which places an overlay in the game, push to talk functionality, and clear and crisp voice chat for all players. It’s also interesting point out that this voice chat lets the killer communicate with the survivors as well. It’s awesome you get to hear the others openly strategize, though I wish it was proximity based for immersion. You’re definitely missing out if you’re not using voice chat, but there is a text chat option. I’d also like the option for a button that could ping you current location for some additional contextual awareness for your teammates. The characters themselves spout lines that are situation based, and it’s cool to bounce off that to help communicate. Last Year is at its best when everyone has microphones, and the hilarity that ensues as you hear your teammates scream when you can’t help (especially if you’re playing a class without any offense).

The only issue I have with the game visually, is the lack of a FOV slider. I can see it not existing for balance reasons, but the default field of view is too tight and thankfully doesn’t introduce motion sickness, which I’m normally susceptible to. While the default FOV works in this regard, I’d love to see an option to increase it. Last Year: The Nightmare is one incredibly polished game. It looks so good in Unreal Engine 4, being visually stunning and detailed. The environments alone are award-worthy. So many personal touches, and has a handcrafted look and feel. Since there aren’t any NPCs or other characters to interact with besides your team, the levels tell stories atmospherically. For instance, the school level has faculty members dead and scattered. The library has a Ghostbusters feel to it, and the bell tower has a “Scream 2” vibe. They evoke different movies, and material while making it all its own. 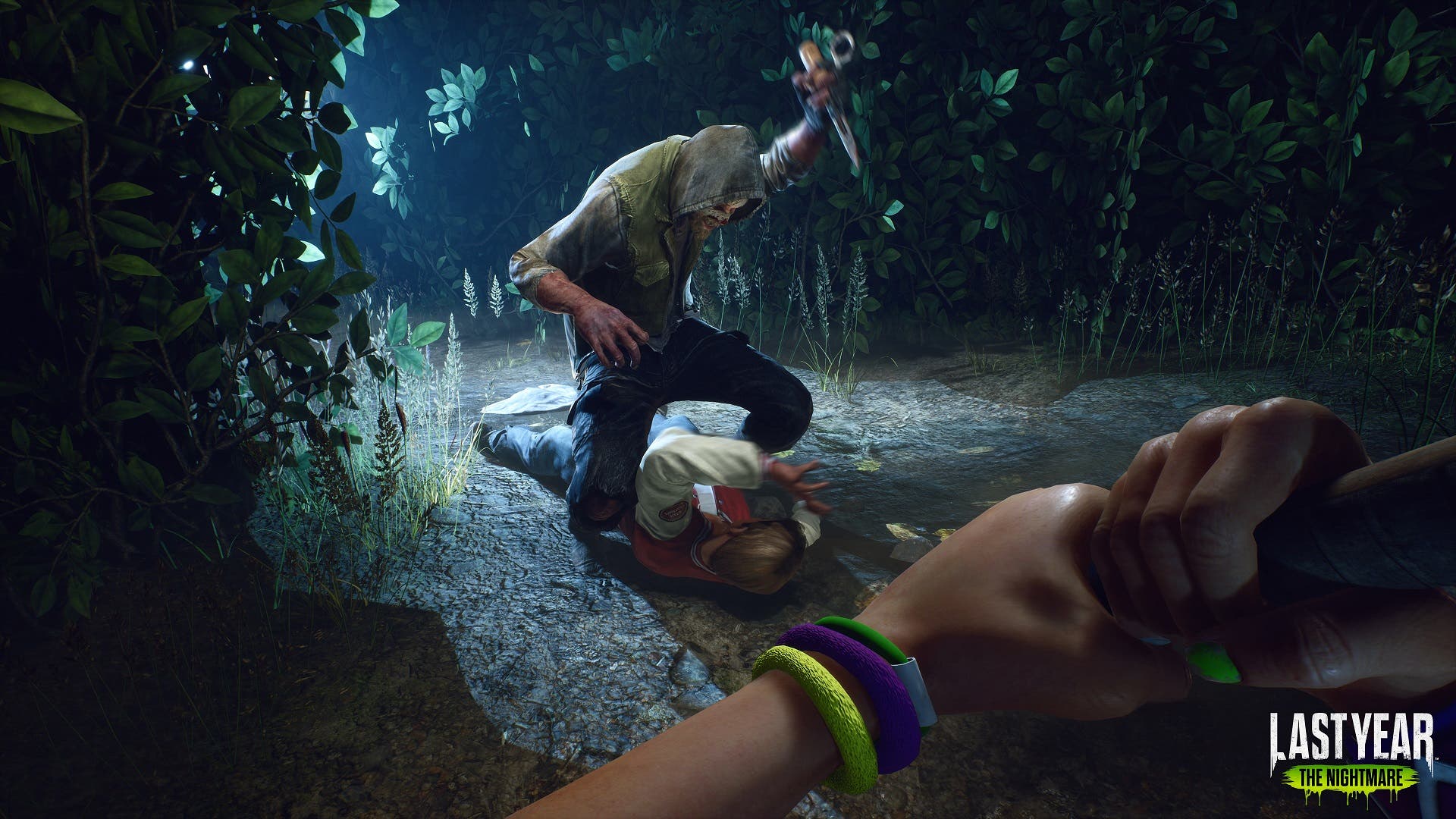 Last Year: The Nightmare is not without its faults. Especially on launch day, but since then I’ve been randomly disconnected or had issue connecting to lobbies that were clearly not related to my internet. I’ve also experienced and seen a fair number of bugs from doors opening visually, but not actually letting the player leave a room. I had an instance as a killer that didn’t allow me to walk or run, I could only jump as a means of movement and ultimately lost all chance of being able to catch any survivors.

Given how well everything else is about this game, I have no doubts that Elastic Games will be able to squash these bugs and correct any issues going forward. Elastic Games seems to have their head on straight, and directly connected to the community to make this the best game it can be. 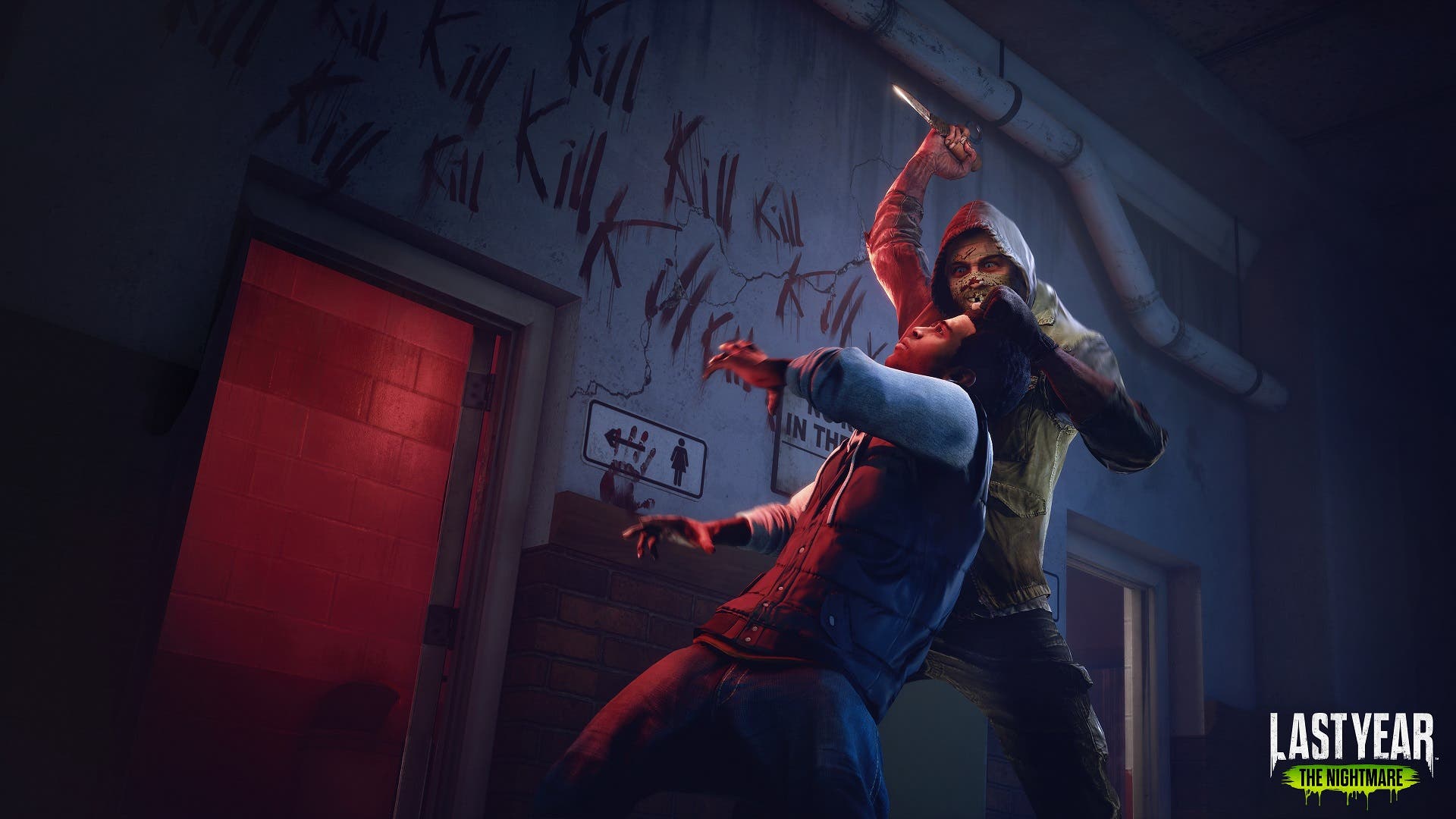 Elastic Games gets it right with Last Year: The Nightmare as it easily gets its hooks in you from the start. With a free content road-map outlined for 2019, the future looks bright going forward. It has a few bugs that keep it from greatness, but nothing to keep anyone from playing it right now. As you get paired up with random people and are forced to work together, this is the kind of game you make friends from. If you want to see what the definition of a successful Kickstarter is, look no further than Last Year. Upcoming platforms are in for a treat, as Last Year: The Nightmare is a killer game.