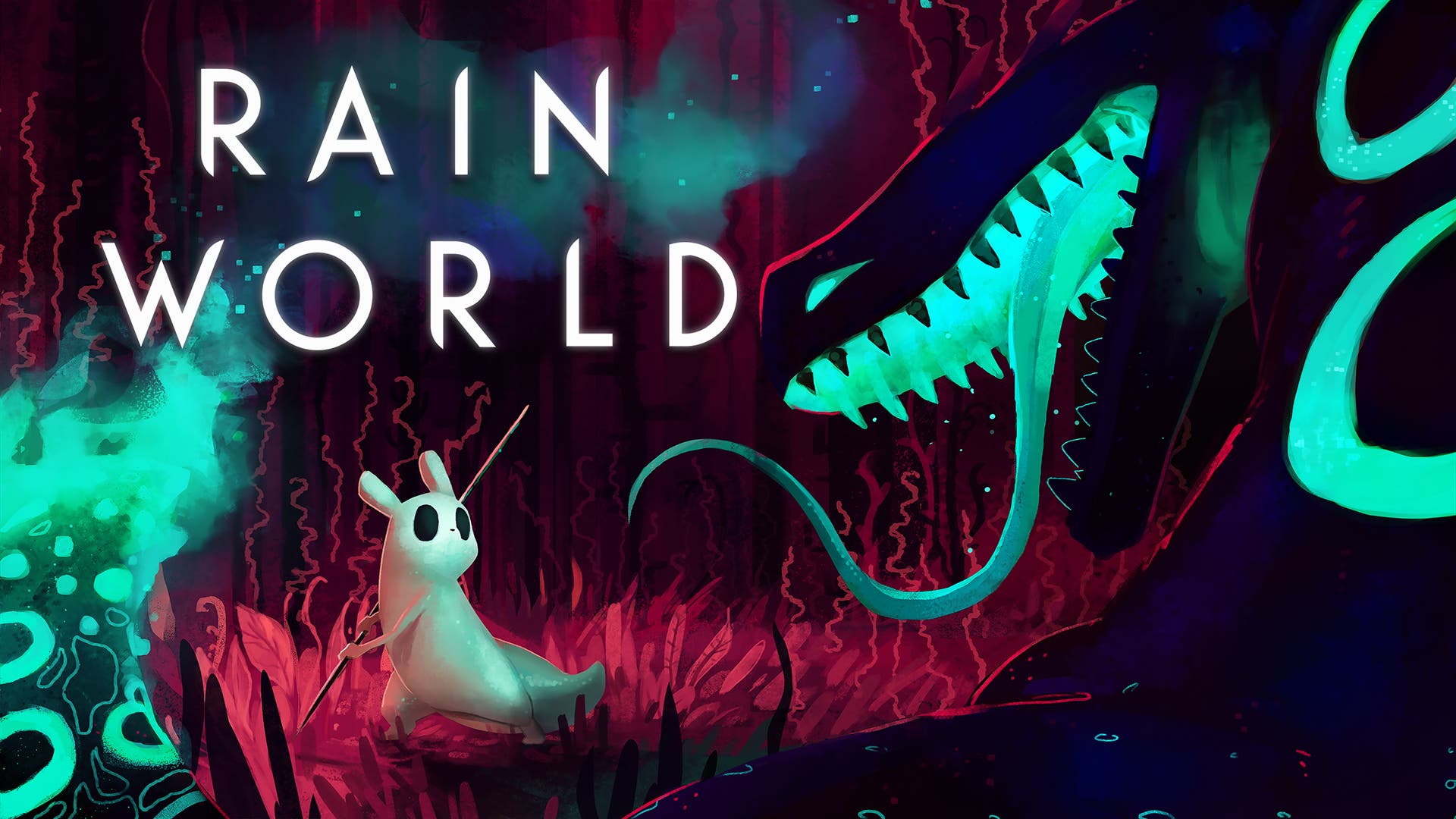 Rain World is a two-dimensional side-scrolling platformer that puts you in control of a creature called a Slugcat, a kind of strange but cutesy mollusk-mammal hybrid. As said slugcat, you are separated from the rest of your family and are trapped in the depths of a strange, hostile world left to fend for yourself and do your best to survive. This much is revealed to you by the game’s opening cutscene, presented as a set of vibrant, hand-drawn stills. When the game fades up from black after the cutscene ends, the world that greets you is of a decidedly different tone. 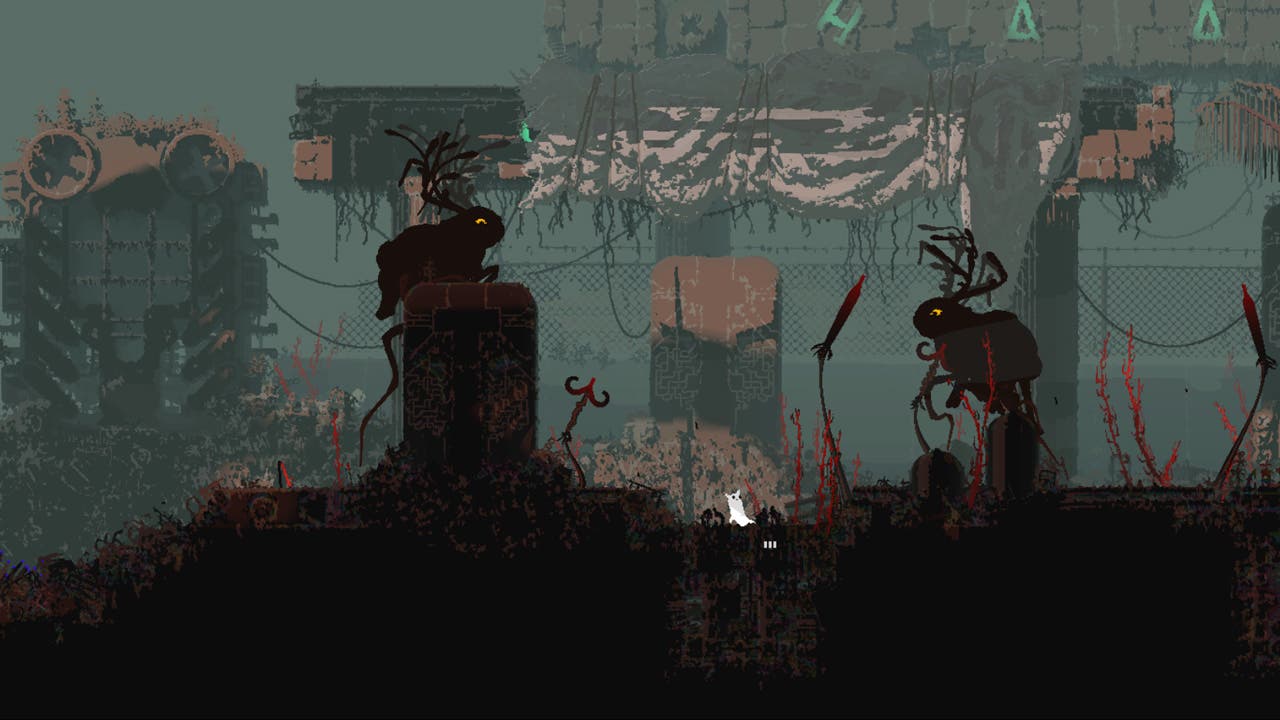 This is yet another pixel art game, although the fidelity of the characters and animation is well past anything that you might find in a typical 8-bit or 16-bit era title, so this isn’t so much a nostalgia play as it is an artistic choice, which is fine but to my mind doesn’t do enough to differentiate itself. Looking at the game, it’s hard not to feel like you’ve seen this style many times before.

The world itself is dark and gritty, which is fitting with the notion that you have supposedly tumbled down into some dark, soggy sewer underworld infested by all manner of impossible and disgusting baddies, some of which you can eat and some of which are very excited at the prospect of eating you. I can’t help but feel like the game may have benefited from an artistic style more akin to its illustrated cutscenes, as a way to provide contrast and depth to the dark world you’re trying to escape. There’s nothing bad about any of the art, it just doesn’t excite me. 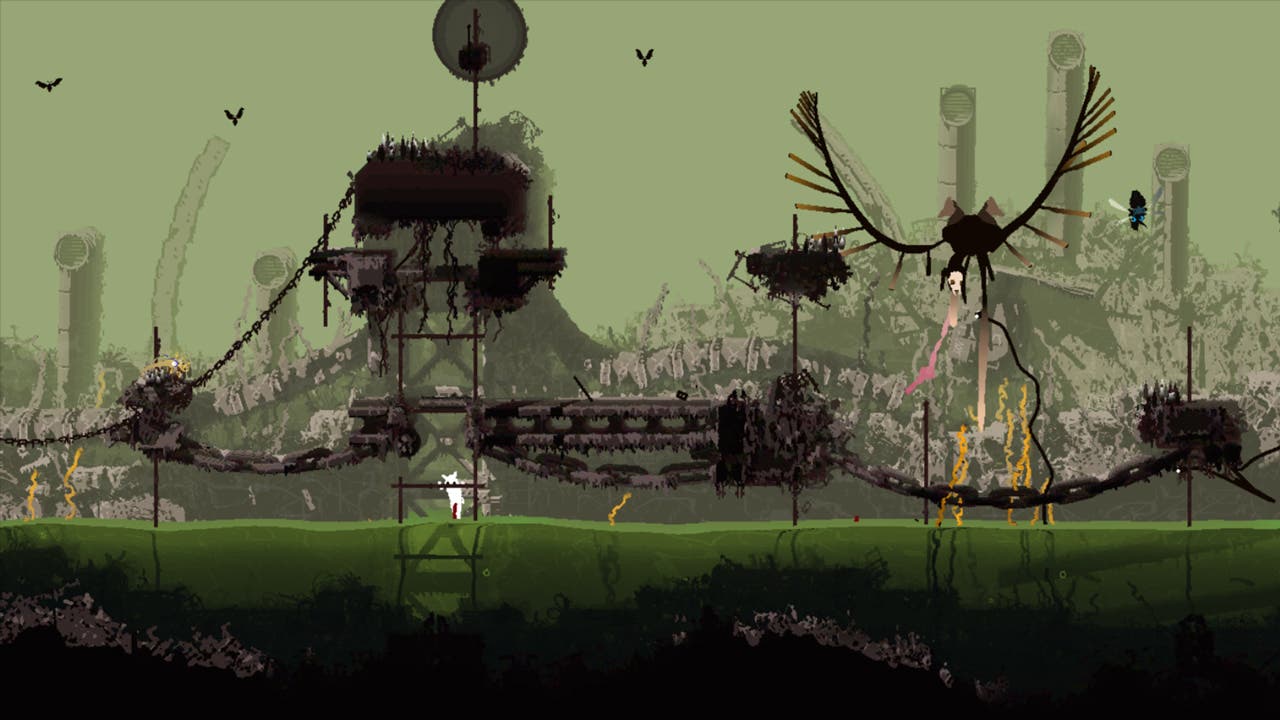 As far as gameplay goes, you move your slugcat around each screen, moving between platforms and through pipes, avoiding hostile enemies and eating small creatures to build up your energy reserves. The game is laid out into rooms, some of which fit neatly onto one screen and some of which span multiple, in a format reminiscent of Metroid. You utilize a series of connective pipes to move around within and between rooms, as much a means to travel as they are an escape mechanism. When you’re not platforming your way around, you spend much of your time trying to stay alive and primarily by avoiding engaging in combat with anything larger or more mobile than you, which turns out to be a large number of the game’s colorful, sometimes erratic enemies. Eventually, your controller will begin to vibrate with ever-increasing strength as a storm gathers, forcing you to seek refuge in a sealed compartment that can keep you safe until the resulting flood recedes, provided you have banked sufficient energy points from gobbling small critters.

Mobility is an interesting issue in this game for me; the slugcat, apparently more slug than cat, moves slowly and deliberately. Certainly not as slow as an actual slug, but much slower than what I’m used to from modern platformers. It has a decent run speed when up on its hind legs, but I found myself accidentally transitioning between running and crawling too often if I tilted the stick too far down while running left or right. The slugcat also exhibits limited agility, with a relatively short jump height. You can perform a charge jump, at the cost of making yourself more vulnerable to attack while remaining stationary to perform the charge. The result of these mobility limitations is an emphasis on patience, thinking about your path in advance, and playing passively. At least, this is the case with the default character; there are three “types” to choose from at the start which are essentially stand-ins for difficulty settings. There is a “warrior” type (hard mode, which is locked from the start) which allows for a more aggressive or confrontational play style, though you still have to pick your battles. The “monk” type seems to reduce the overall number of enemies in the game, thus making the journey easier, and which I found myself forced to use in order to have more time and flexibility to explore. 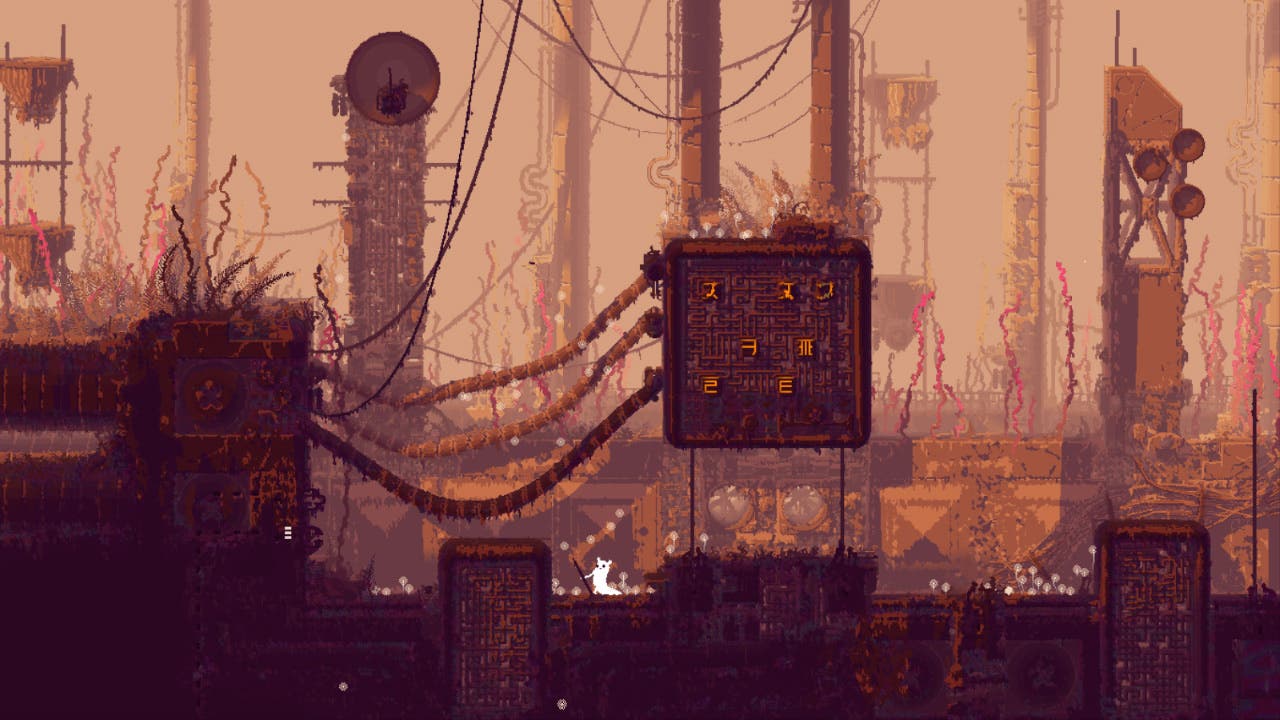 By all accounts, I should like this game; it features nice pixel art, is centered on stealth and exploration, and plays host to an imaginative world to traverse. Instead I have found myself mostly confused and occasionally frustrated while trying to make sense of exactly what I’m supposed to be doing, and why I should care about the protagonist or making progress at all. The opening cutscene establishes the setting but doesn’t really do enough to inspire a connection to the character, and once in game you just sort of go. Ordinarily I’m not put off by a thin premise so long as the gameplay and mechanics are fun and engaging, but with Rain World I feel like I’m being asked to invest a lot of time, patience and energy into something that I have little reason to be invested in, and will gain little enjoyment from.

This is a real shame, as the potential for what Rain World could be is clear on its face. In practice though, it falls short of that potential, in some ways more than others. Artistically speaking, the game is fine, and I think the intended idea of exploring and avoiding being eaten is a good one. However, I have died on many occasions to enemies and situations I did not fully understand; was this enemy actively biting/attacking me, or was being in contact with it causing damage? Was there a way I could have avoided being chomped? Also, why does taking damage not have a more obvious visual effect? Is there even the concept of hit points or do I just expire in one chomp? Yes, there are rocks and sticks and things you can pick up to throw at enemies, but I found this behavior inconsistent in terms of being able to ward them off. 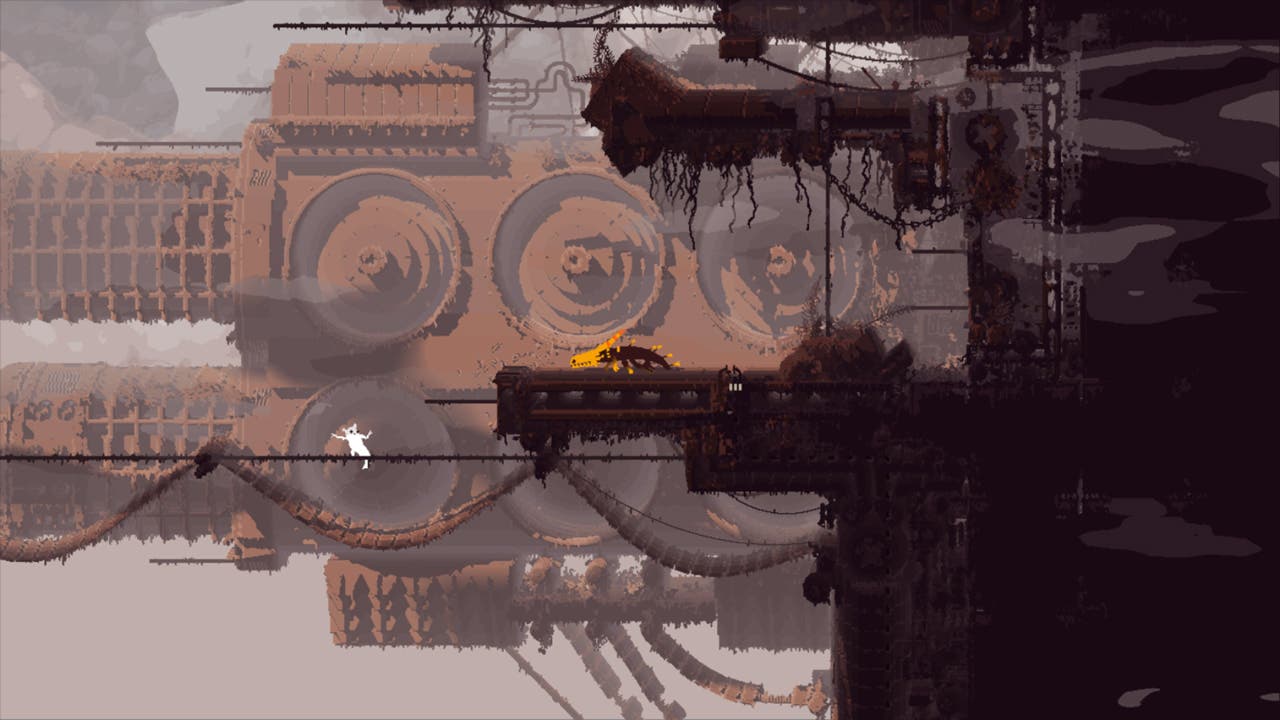 One of the most important components of any game is the rule set that governs the world, and means to either clearly convey that to the player or make them easily discoverable, but most of the rules around combat and enemy engagement remained obtuse to me through most of my time with the game. The net result of this is that opportunities for me to learn and improve are lost, leaving me instead in constant search of clues that don’t always come. I had a much easier time getting my head around basic concepts like how to control my character effectively (there is a difference between standing and crawling, which was not inherently obvious at first!) or how enemies behave and how I ought to deal with them, once I restarted the game after an hour or two using the easier “monk” type.

I don’t feel that a player should have to drop difficulty levels down in order to understand fundamental aspects of a game’s design, and while I at least felt more comfortable after making this change, to me it indicates greater problems with communicating intent to the player, if not with the design of the systems overall. Even with a change in difficulty and a better understanding of how everything worked, I still found myself dying in situations that I felt I had little control over, which can get really frustrating with a relatively unforgiving checkpoint system and the need to spend what is in my opinion too much time retracing steps just to get back to a tough room that you ultimately experience another character death in. 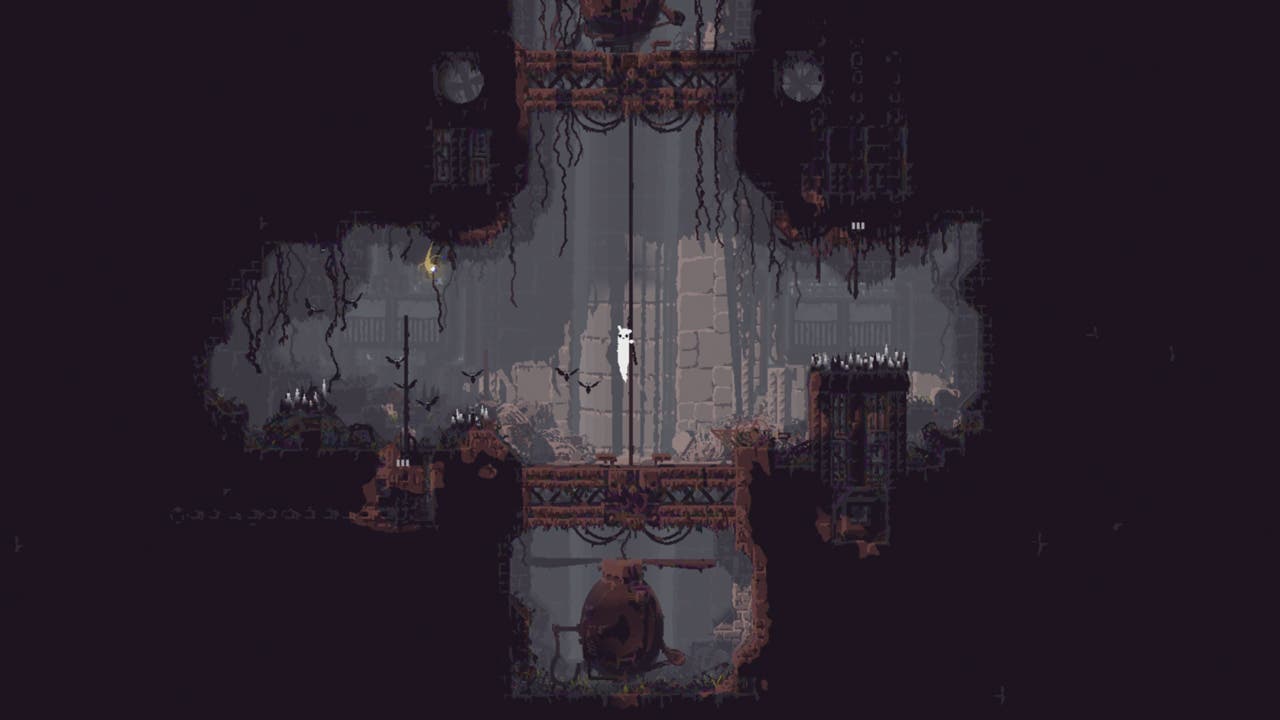 Rain World shows up to the table with a lot of good ideas but fails to execute successfully on many of them. What should probably be a challenging but enjoyable game feels more like a directionless, unintuitive slog that, while mostly pretty to look at, is confusing and possibly overly difficult for the sake of being difficult. I can see a situation where just a few tweaks to character movement (namely improved speed and agility) would go a long way toward making this game feel like a properly balanced challenge. It’s entirely possible that the point of the game is to be really hard, but if so I find the controls, mobility and systems design is at odds with that intention, because as a player I never felt empowered to deal with the challenges laid before me so much as at the mercy of the whims of whomever is pulling the strings.