The Angel has a new friend. Today, Question (indie studio with veterans of the Bioshock series, Disohonored, Eldritch and more) are pushing the first major update to The Blackout Club servers for 2019. The Stalker PvP update lets players invade co-op games on the opposing team, presenting as another teenager playing on the side of Redacre’s very own boogeyman. At first, players will be unaware of the intrusion as Stalkers come unannounced and uninvited, but for those with a keen eye they’ll notice a fellow player watching their every move, collecting info on their sinful activities, and reporting this all back to The Angel. The Stalker uses their phone to sneakily take photos of the cooperative players, bringing all sorts of trouble down on their targets. It is a desperate, adrenaline-charged process for both sides as the Stalker is always alone, against up to 4 cooperating players yet capable of wreaking havoc on any potentially successful mission. 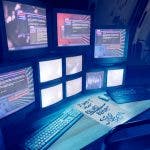