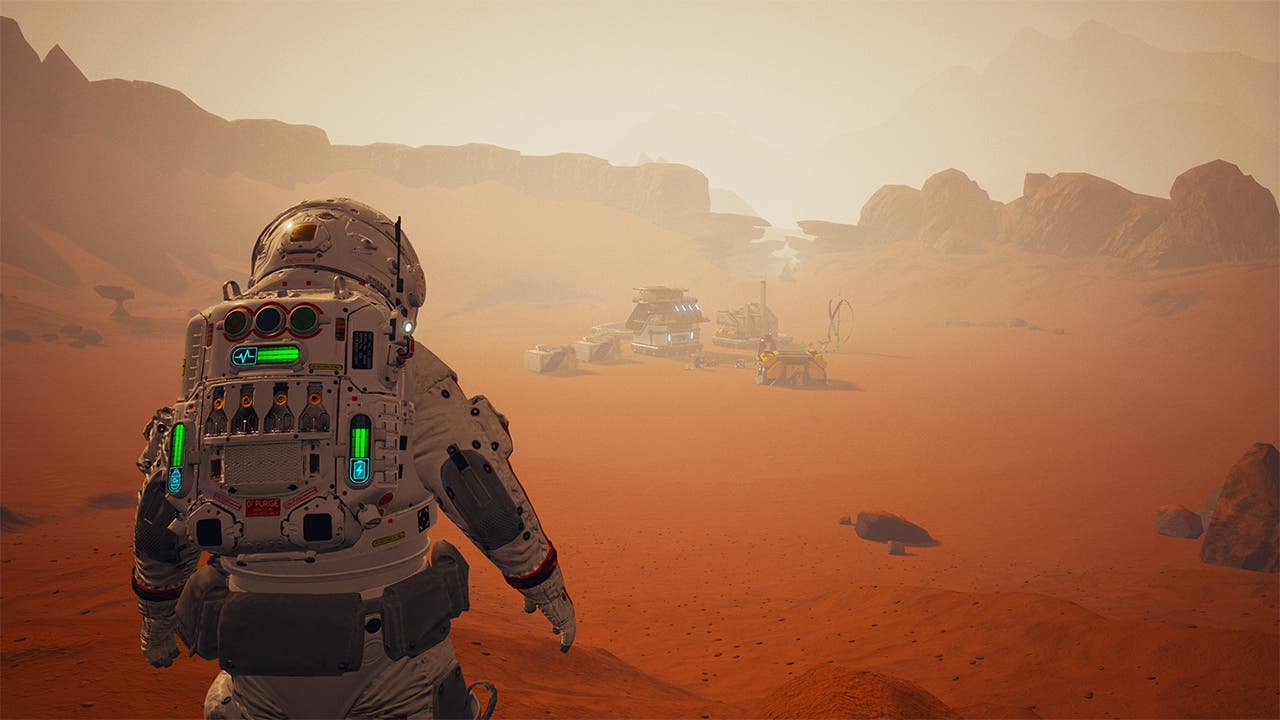 The notion of packing up human civilization as we know it and heading off to another planet to make a new home is nothing new; we’ve seen it in countless works of fiction over the course of decades, but we’ve seldom been given the keys to an excavator and a HAB and tasked with bootstrapping a colony nearly from scratch. This is precisely what JCB Pioneer: Mars tasks you with, and it drops you right into the thick of things. 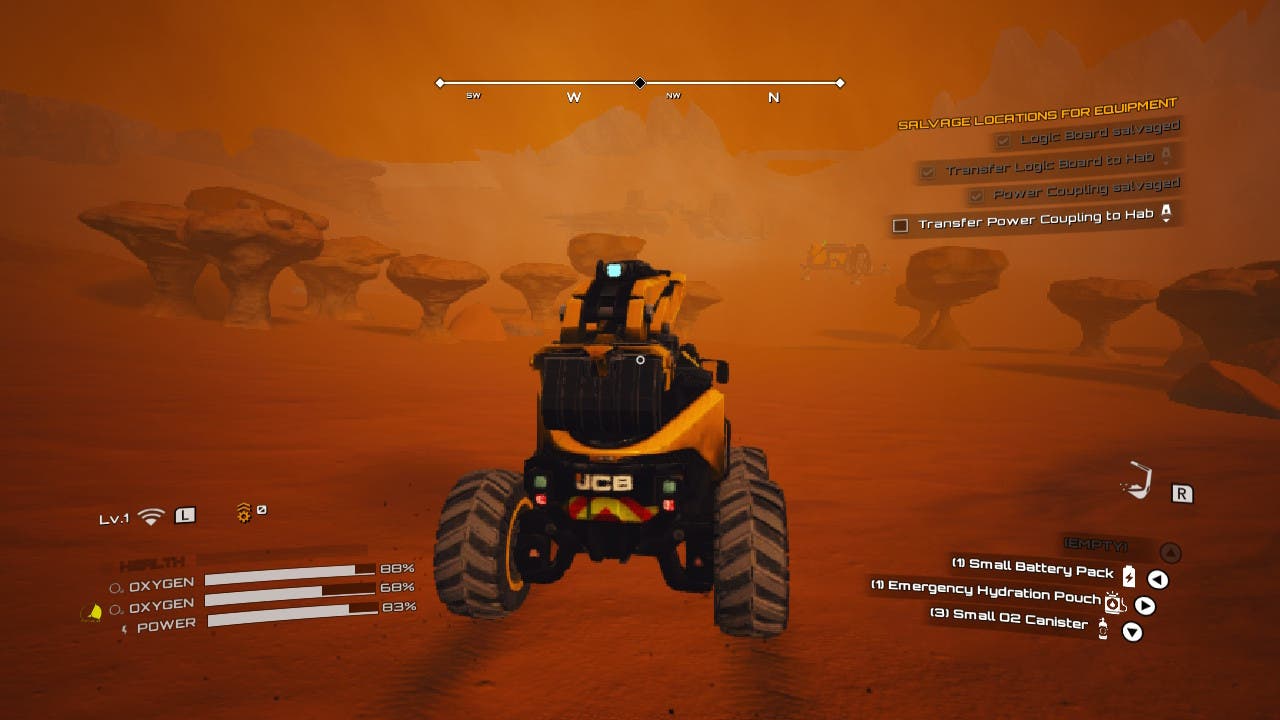 The opening sequence sees you waking in the wreckage of a crash landing, working to navigate the treacherous Martian landscape in search of shelter. It really amounts to a linear tutorial of basic movement controls, getting you comfortable with your suit and some of the hazards you can expect to encounter, until you find your surface vehicle (dubbed an Explorer) and can start to make quicker progress to the beginnings of your settlement. Despite being a glorified tutorial with some asteroids and electrical storms thrown in for excitement, the opening sequence does a decent job of establishing the situation and presenting the stakes at hand.

Once you reach the settlement (curiously already established with a garage, a HAB and some solar arrays), you set about making basic repairs and continuing on some tutorial missions which guide you through the process of retrieving materials from chests, making repairs to your structures, and constructing new modules, all the while managing your food, water, oxygen, and power resources for both your suit and your Explorer. After finishing these initial tasks, the game nearly literally bids you “good luck with that whole survival thing,” and opens up for you to explore and work on building up your colony. While it feels good to be let loose relatively early, there is still quite a lot about the game that remains unexplained at this point which you have to figure out for yourself as many mechanics are simply not explained at all, leaving you with a sense not only of being stranded but also unsure of whether you’ll be able to figure out enough to stay alive.

Exploration is a curious thing early on; the map screen very helpfully displays the practical limits of your exploratory abilities based on your oxygen and power resources (displayed as tinted circles emanating from your current location). This gives you a very clear idea of just how far away from home you can go, which is both “far” and “not far at all.” Theoretically you can get a fair distance away from your settlement and have plenty of resources to make it back safely (especially if you bring spare batteries and oxygen canisters). However, the speed at which you’re able to travel isn’t particularly fast, so even short distances can take a while to cross, and thus you feel like visiting even nearby landmarks are major journeys which must be carefully planned for. You may also encounter a variety of hazards while making your way to a mineral deposit or wreckage, some of which can cause serious harm to you and your Explorer, adding risk to every trip, and so the decisions you make early on have to be well considered.

This is no accident, as JCB Pioneer: Mars is striving for a relatively high degree of realism in most respects; your resources up front are very limited, with only a finite amount of reserves of food, water, air and power available (though truthfully I never found myself in danger of running through all of them). Your carrying capacity in your suit and your vehicle are very limited, so if you’re heading out in search of ore for a new module, you have to plan to balance between bringing enough reserve items and leaving space for whatever you find, and materials to repair your equipment should you sustain damage from a fall or a corrosive gas cloud (of which Mars has quite a lot, apparently). All of this compared with relatively slow (and possibly accurate?) movement speeds gives a sense of lethargy to your time on the Red Planet pushing past realism and headlong into dullness and monotony. 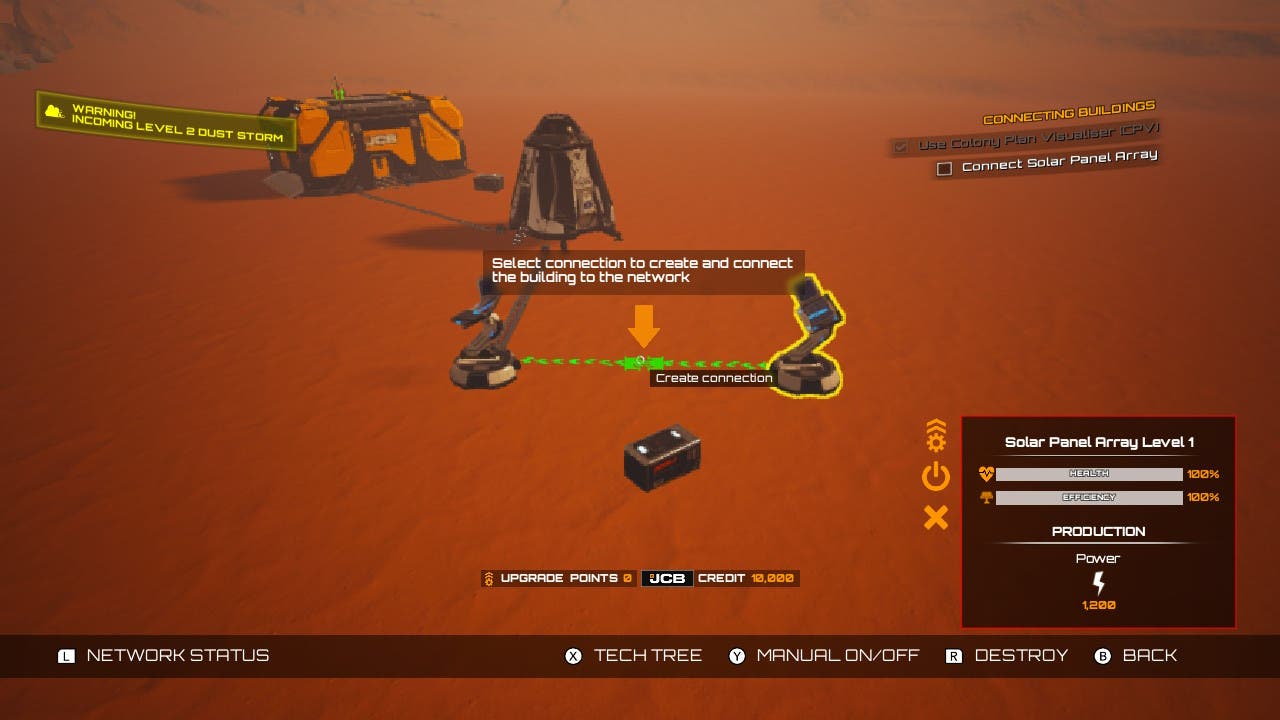 I can’t speak to how realistic JCB Pioneer: Mars actually is; it’s clearly more of a “Hard Sci-Fi” take on a space survival game, likely with some of the realism dialed back in the interest of making sure the game is actually fun to play, although I’m not convinced they made these changes in the right spots. It stands in stark contrast to something like No Man’s Sky, which moves quickly and fluidly and is rife with survival and building systems, but doesn’t concern itself too much with adhering to every law of physics and nature. There were moments trying to navigate radioactive fields of corrosive gas as meteor showers rained down, threatening to crush me while an electrical storm loomed on the horizon in which I thought to myself, “this is probably a little over the top, isn’t it?” However, I do recall that all of these things can be real threats on actual Mars, so it’s not totally inconceivable that a colonist could find themselves dealing with a quadruple threat combo… but it does seem unlikely. To some extent, these hazards help to keep things interesting while you’re making yet another run for Zinc and Silica, though by the fourth or fifth trip they’re more annoyances than they are actual problems.

There are some interesting moments early on, exploring an underground cave system and engaging in some light platforming across rock formations, and there are other opportunities to get out of your Explorer and really dig your boots into the red Martian sand. There is a sense from the beginning of the game that there is a large, rich world to explore, and an excitement at the possibility of getting out there to see what awaits. It becomes quickly apparent, though, that your ability to start engaging with the world is gated behind a set of upgrade trees which would eventually give you a great deal of range and freedom but will take a lot of time to actually work your way through, as upgrade points are tied to completion of building structures, which is also not a particularly quick process. 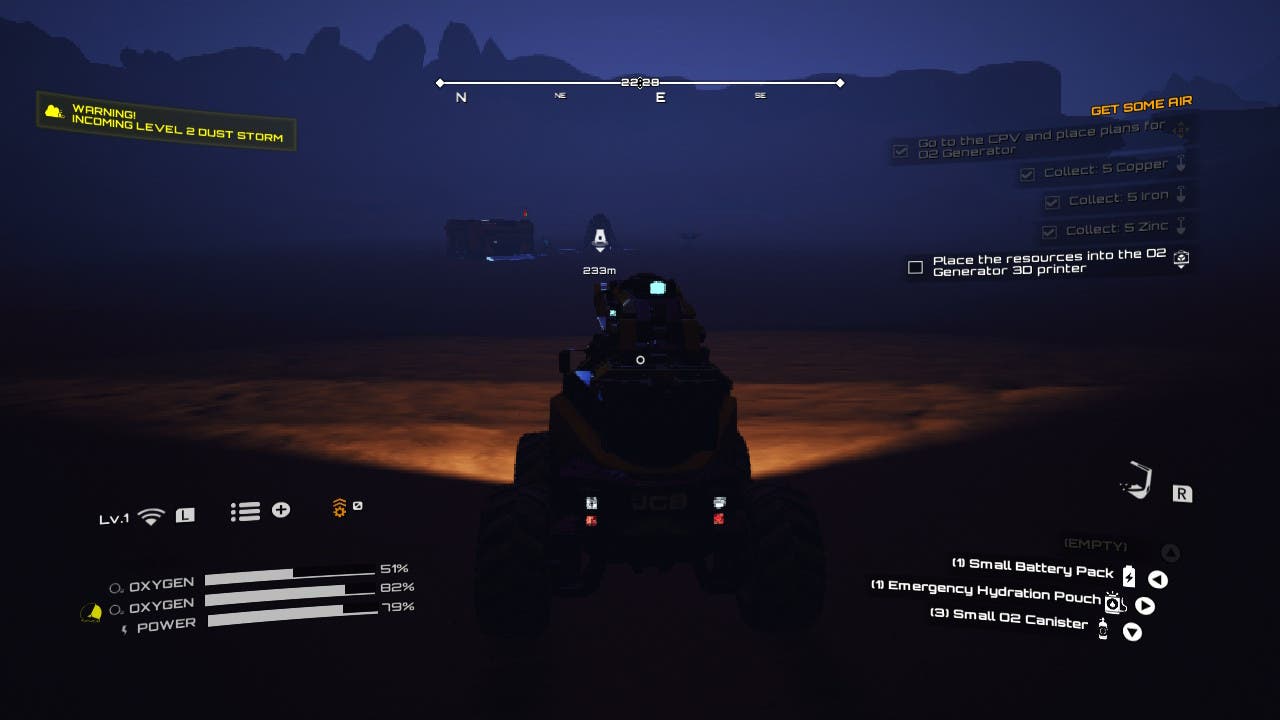 I found the colony-building aspect to be a bit underwhelming; I think this is a place where I may have liked to see some of the realism relaxed. I don’t mind harvesting resources to build things, and the concept of placing giant 3D printers to create your new structures and modules is clever, but I found myself really wanting to see a more modular, directly expandable HAB rather than placing standalone modules scattered around the area and joined by “connections.” I may not have gotten far enough into the construction process to find these options, but given the lack of a gridded placement system for structures, I’m guessing this isn’t the kind of building you can expect to do in JCB Pioneer: Mars.

Unfortunately, the pieces of the game that do work are hampered by the performance of the game on Nintendo’s hybrid system. I primarily played the game in handheld mode, and the costs of putting a planetary scale world running on the Unreal Engine on the Switch are readily apparent. The game seldom is able to hit 30 FPS, and it also appears to be doing a great deal of dynamic resolution scaling which is particularly noticeable while roaming in the Explorer or any time with lots of effects on screen. The result is an experience that at times can be very impressive to hold in your hands (I’m on Mars! On the bus!), while at others can be jarring to the point of breaking the sense of immersion. Some scenes that should steal your breath (and do so on the PC release) are reduced to crude representations of their intended impact. You would be surprised at how far the imagination can go toward remedying this, but more often than not I found myself thinking that the game would look more impactful on a more powerful GPU.

Luckily, the game does fare somewhat better when the Switch is docked, as the overall rendering resolution seems to increase dramatically and the dynamic scaling is not nearly as noticeable, but this still comes at the cost of frames, with the game failing to come anywhere near 30 FPS even when inside your HAB or garage. In fact, the framerate almost seems better outdoors than in, likely owing to less complex geometry in the player’s vicinity. The UI is harder to read and interact with on a TV, however, which to my mind is a fairly significant trade off that should be considered when choosing how you want to play. 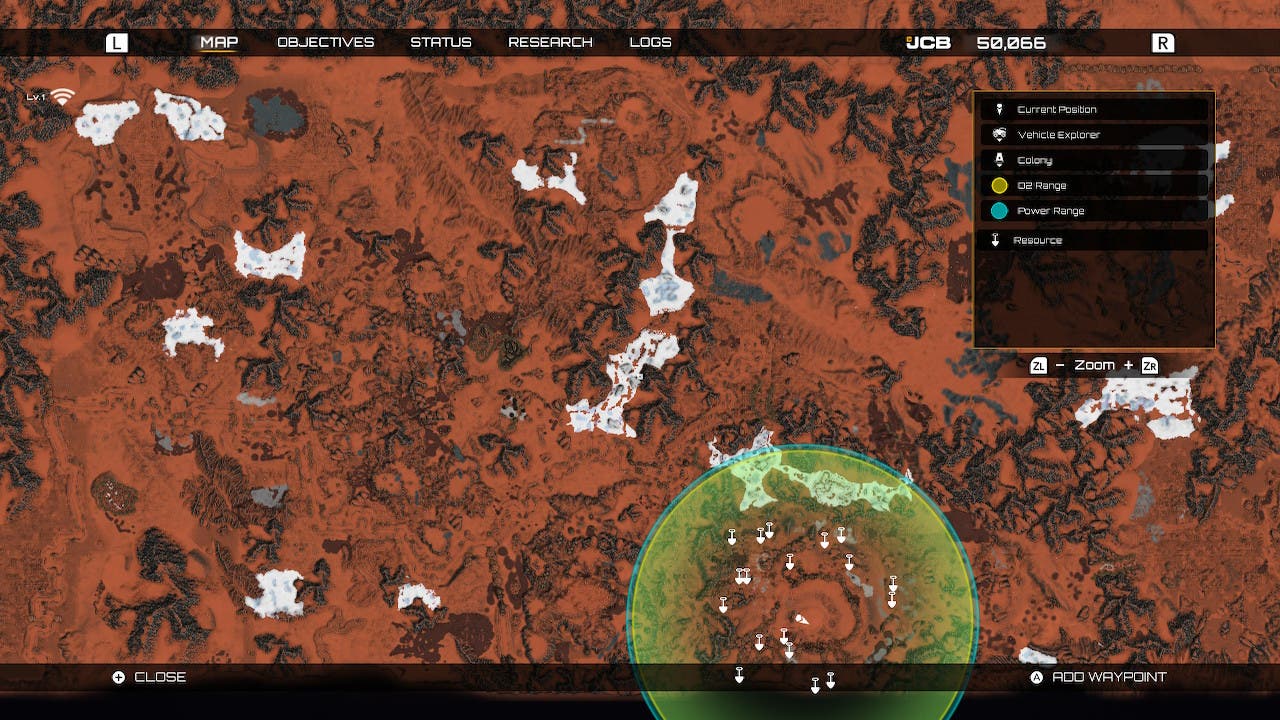 That all being said, I think there really is the spark of a good idea within JCB Pioneer: Mars. It is in some ways ambitious and even exciting; the map is huge with a great deal of planet to explore, and the systems which govern your progress and exploratory abilities are generally sensible and easy to reason about, even if the mechanics of working with them aren’t as smooth as you’d like. Unfortunately there is a simplicity to the loop, giving way to a feeling of malaise which sets in early and doesn’t show any promising signs of being broken up. It feels fairly typical of other games in the survival genre and the concept of colonizing Mars, while strong on paper, fails to be enough by itself to inspire sufficient curiosity and motivation to push forward. The end result is that the spark is stifled before it has the chance to catch fire, and what’s left is a game coming out a few years too late to properly cash in on the cultural touchstones from which it draws inspiration.

As a side note, I had the game in the menu screen to take some screenshots while writing this review, and after maybe twenty-five minutes of idle time I saw the UI disappear, my character pop out of my vehicle and appear to fall through the world, leading to a game over screen. Apparently the menus don’t pause the actual game world (there is a separate pause menu on a different button), which seems like an oversight for the Switch in particular. My poor colonist literally died of boredom (and asphyxiation). 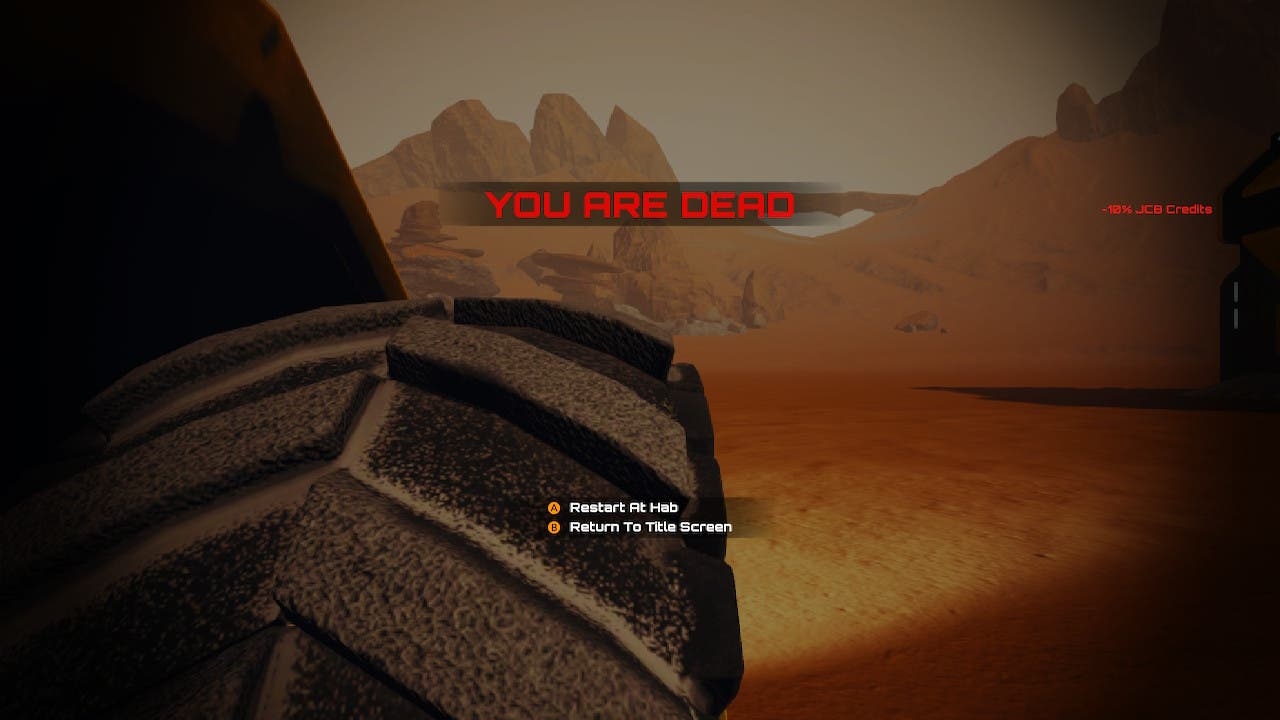 There may be something here for you if you’re looking for a game that simulates the experience of planetary colonization so accurately that it includes every ounce of tedium that would come from a solitary life as a Martian colonist. There is also something to be said for being able to take this game on the go, if that’s your thing. However, for a product which fails to inspire a sense of mystery and wonder beyond its opening moments and which is still so rough around the edges, there are simply better, more enriching and more engaging options for your money on the Switch. In other words, don’t listen to Hauser; don’t get your ass to Mars.