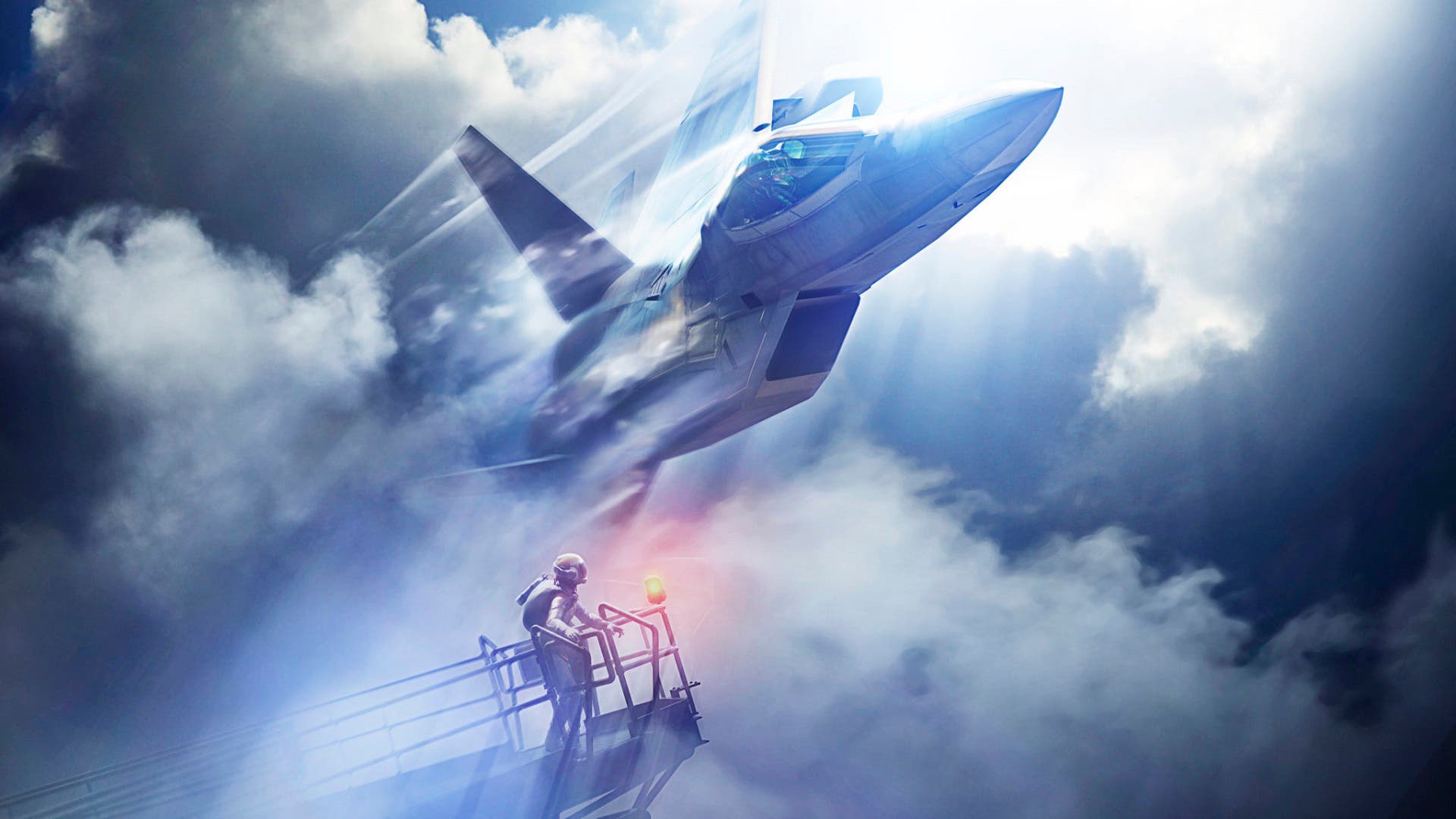 It’s weird to think it’s been twelve years since the last numbered entry for the ACE COMBAT series. ACE COMBAT 7: SKIES UNKNOWN returns in its glorious and unusual fashion – acting as if it had never left. While the cutscenes are bizarre, they tell tales where humanity shines in the dark. With that, the series has never looked or played better. ACE COMBAT 7: SKIES UNKNOWN features an interesting cast of characters, a wide variety of planes to pilot, some really cool missions, and an engrossing story from start to finish. 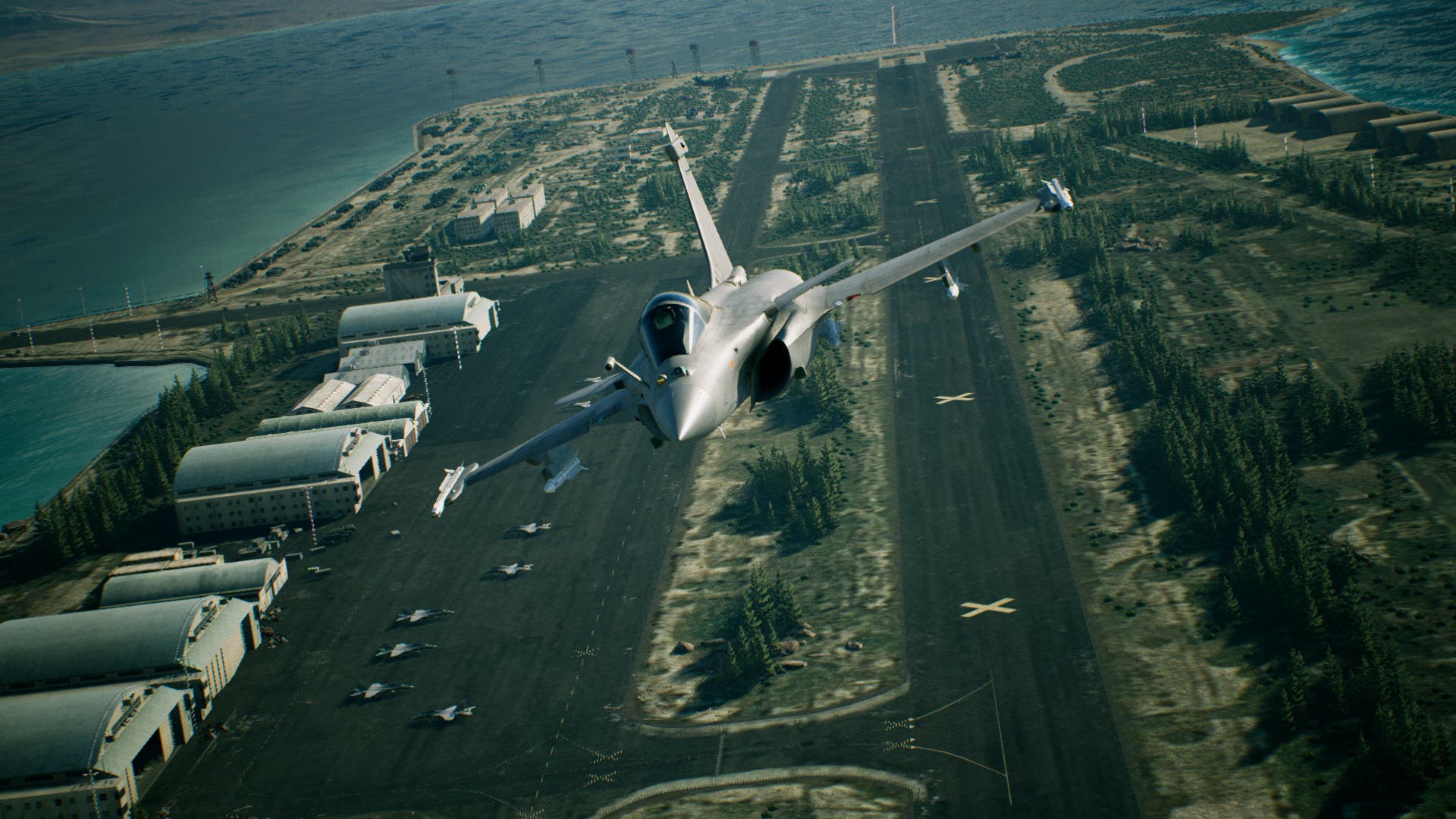 ACE COMBAT as a series that’s about geopolitical strife, and continental divide. A world that’s on the fringe of war every second of their days. If Usea, Uresea, Osea, and Belka all sound familiar, then you know ACE COMBAT in some form. For those that don’t, then these names will seemingly blend into one another without so much as an explanation. And there’s nothing for those who haven’t played it before to catch you up — even for returning players. The cinematics go over things that happen on the ground, and are tangentially related to what’s happening in the air, and how they connect is also fascinating. This an exaggerated story that focuses on a pilot with the call sign of “Trigger”, and the ragtag of prisoner pilots who work to right the wrongs their country has done. And while it isn’t anything surprising, it is engaging throughout.

With 20 sorties (or missions), the 12-15 hour campaign will offer a lot of variety and interesting locales. Ultimately this is a game about dogfights, and outmaneuvering your opponents. There’s stealth missions which are incredibly tense as you’re trying not to crash a million-dollar jet going slow through a canyon trying to avoid spotlights, unfortunate escort missions with an ally who might as well be flying a paper airplane because they’re so fragile, and missions which require a point threshold to be reached like it’s an arcade game. For better or worse, these missions are fun and broken up in a good way that you don’t get bored. The worst thing about the campaign is the lack of more frequent checkpoints, and their placement. Some checkpoints could come earlier, or later based on what it’s asking you to do. So the game asks you to do a bit of trial and error. It’s really cool that there’s optional objectives when starting certain missions, like doing mid-air refueling or landing on an aircraft carrier. While you’ll be shooting down one-person jets, there’s these air fortress battles that will take your breath away. They are few but bombastic to take part it. The last mission in particular is among the best of the missions that are on offer. 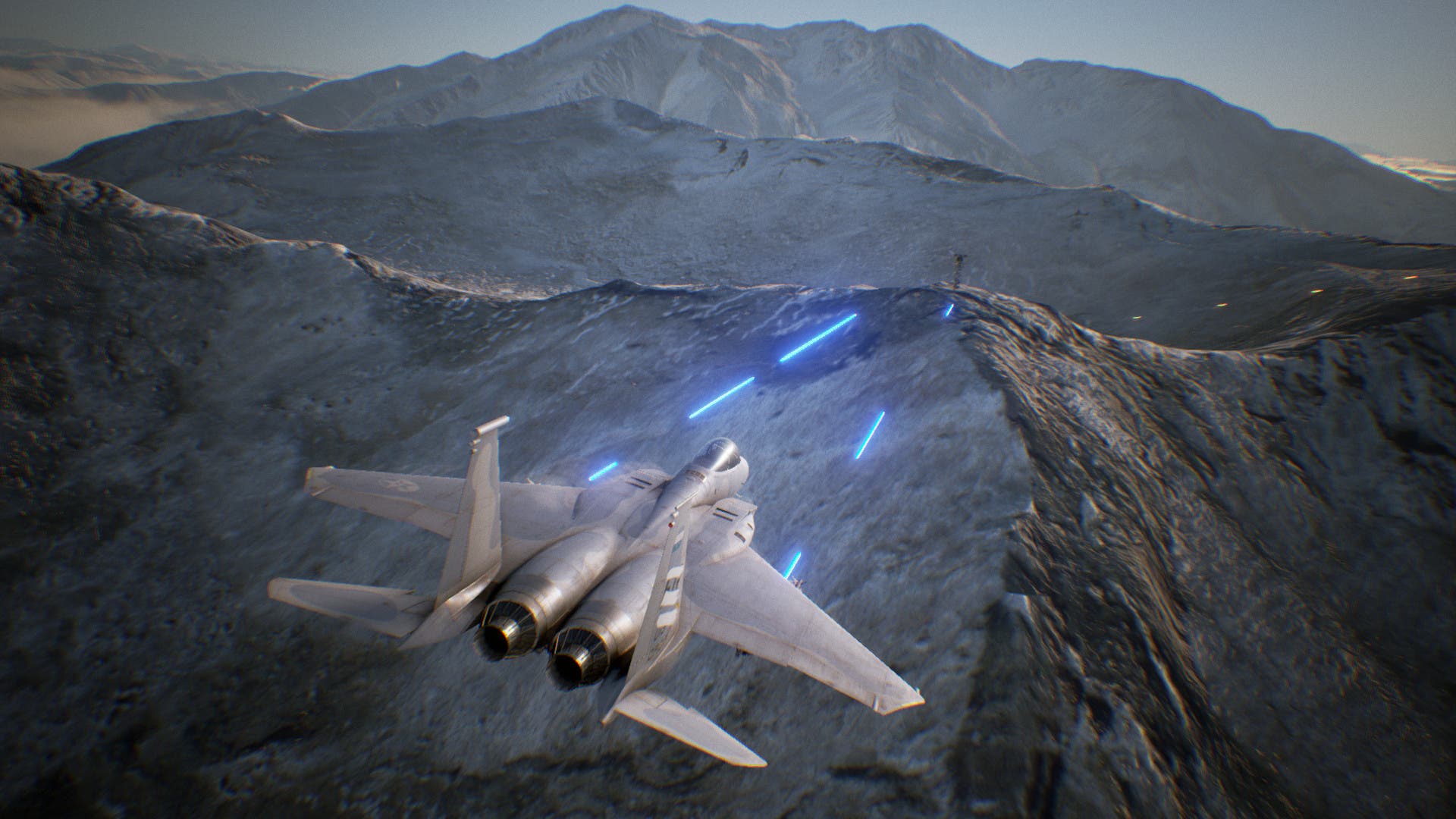 While the story wasn’t considered for rookies, ACE COMBAT 7 offers the choice between basic and expert controls, with expert being the choice of veterans, and anyone who wants a challenge and more precise handling. One of the more advanced tactics is holding both brake and gas for quick turns. These quick turns will almost always lose a missile that’s locked on, but at the expense of speed, which if held too long will slow you down to a stall. The core gameplay when in a sortie is using your guns, missiles, and special weapons. Then there’s flares to be used in emergencies when you can’t evade when you’re locked on. All of these items, except guns are in limited supply.

In ACE COMBAT 7: SKIES UNKNOWN, you’re able to replay missions to achieve a higher score and grading. In addition to playing these missions again, you’re earning currency, which I’ll get to shortly. Alternatively, you can choose the “Free Flight” option so that you can fly around a mission’s locations and weather conditions without any enemies. The missions can be tense, and taxing, so having the option to fly and chill is a wonderful option. 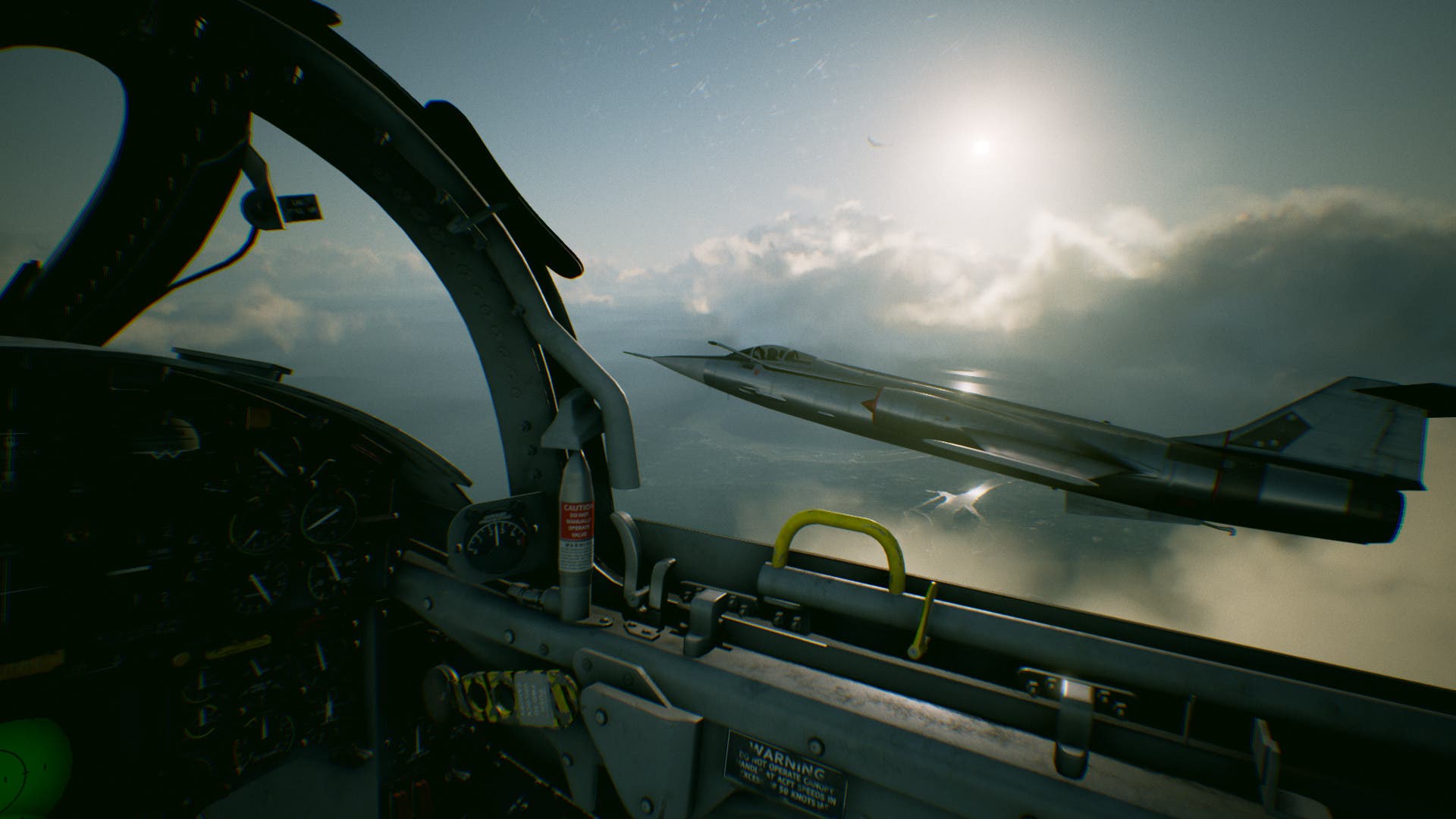 The aircraft tree returns, whereby you spend currency on upgrades and new planes. There’s some decisions to be made, because the money flows pretty steady, but goes much quicker. The upgrades are parts that can be equipped on each plane individually. It also makes the parts available for every plane at once, so you’re not “taking” an upgrade for a specific plane ever. There’s a limited number of slots for what parts can be slotted, and are also capped by type. I never felt the part system hampered me. It offers the exact flexibility and buffs you’d want. The planes are all real-world planes, and are branched by manufacturer, so you can work your way to the newest planes in short order.

ACE COMBAT 7 asks you to learn different jets. Now, you don’t have to be an aviation expert, but knowing what the mission asks for is helpful. The mission briefings will give details on how many air or ground targets there are. Beyond that, it’s best to know what plane offers the best to handle those types of situations. In most cases, any plane will do just fine, though you can sort planes by role and capability. 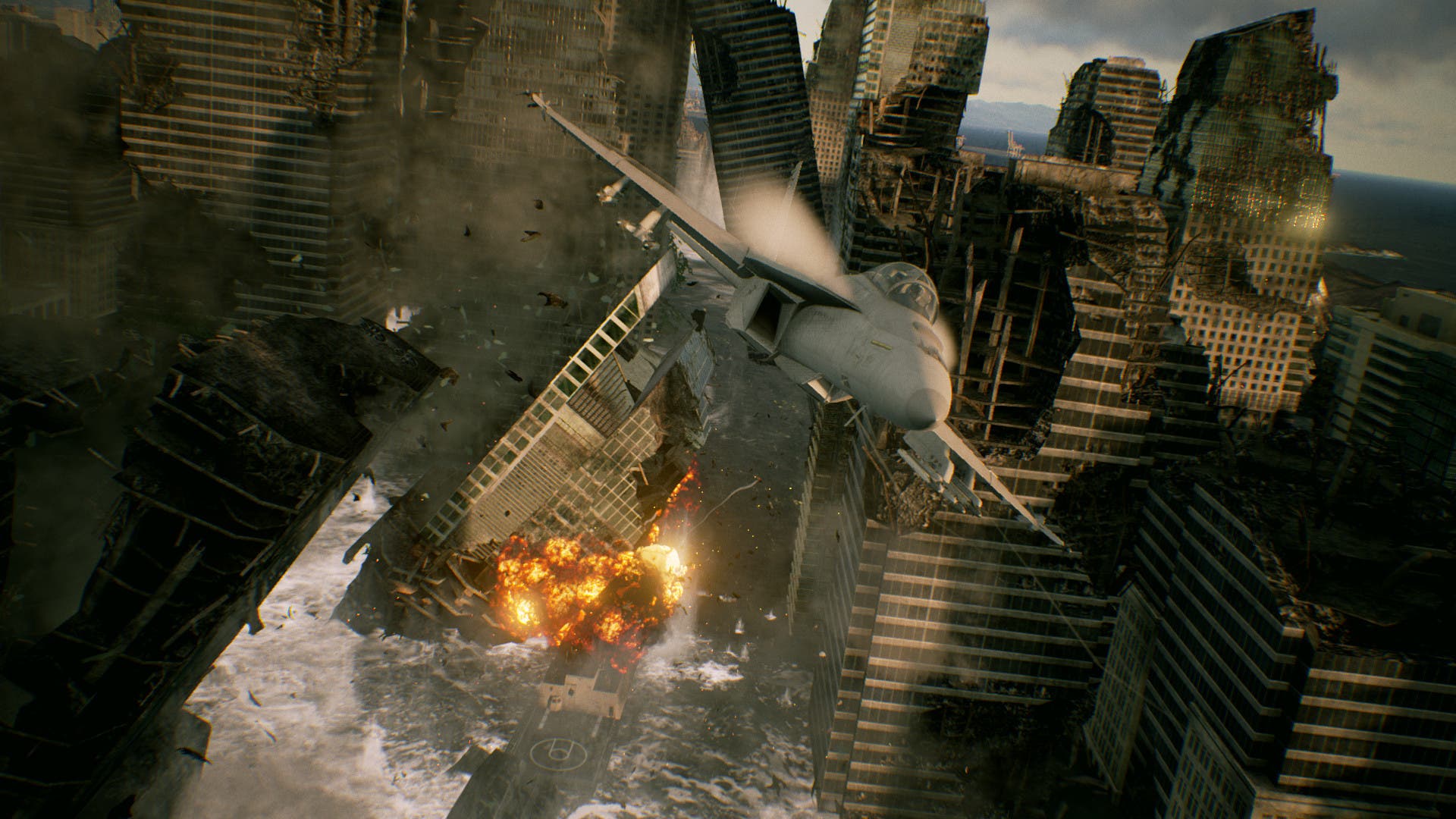 At the end of each sortie, you can watch a replay of your gameplay. I wish it would allow you to export it, or save it for later, but as long as you don’t press the skip button, you can make something out of the replay. The game then gives you a recap of your movement, and tallies your score. In mission, if you hold the missile or special weapon button, you can watch it reach your destination. It’s clear that ACE COMBAT 7 is a game that wants you to take your time to look at it, and often.

You might be surprised to find that there’s multiplayer in this game. It offers up two modes, Battle Royal (deathmatch) and Team Deathmatch. With matches only lasting five minutes, you’re quick to get in and out, and ready to start the next one. A great feature is that most of the items you unlock in the aircraft tree carry over to multiplayer to be used. This shared resource system is great for those who focus mainly in single-player, receive benefits of planes to be used when they get to multiplayer. The maps and modes are fun, and last just as long as it should without it feeling drawn out. 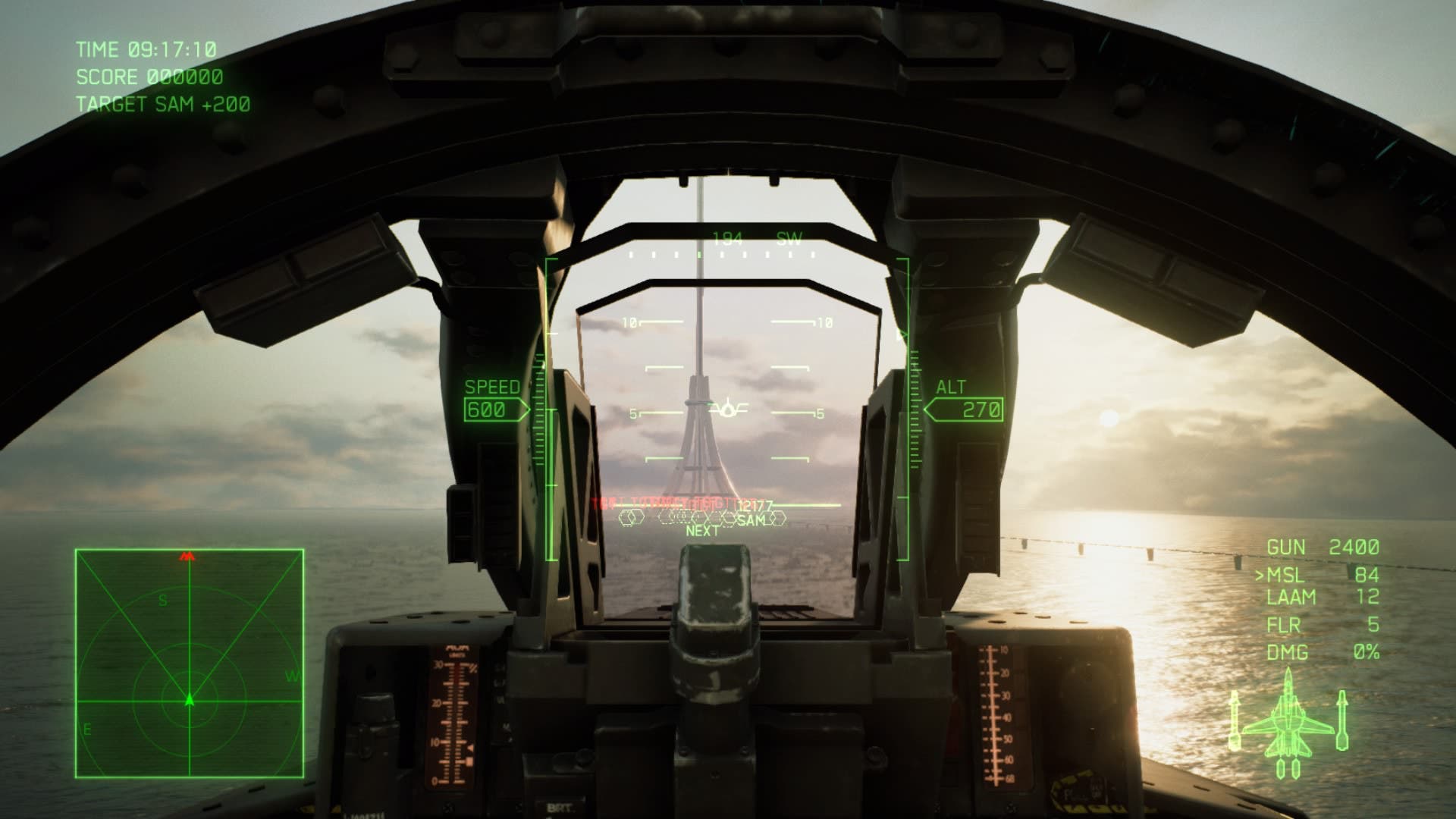 ACE COMBAT 7 runs on Unreal Engine 4, and it looks phenomenal. It also runs smoothly, with every setting at maximum, I was getting 144fps at all times. Even when flying low to the ground and the buildings coming into view with rain and clouds, it maintained that framerate without breaking a sweat. Specific to that, the clouds are volumetric, and offer a gameplay caveat. While it offers protection and cover from incoming missiles, if it’s cold, it can ice up your wings and drop you from the sky. Rain effects will streak across the canopy. And the game’s time of day can really set the mood. This game is technically impressive, and looks great doing it.

ACE COMBAT 7: SKIES UNKNOWN has some really solid missions that deal with political and military intrigue, a fantastic weather system, and constant chatter that wouldn’t normally be tolerated by any military force. It’s a bizarre and endearing title that’s an absolute a joy to play. ACE COMBAT has been sorely missed for the past twelve years (we don’t talk about 2012’s Assault Horizon). ACE COMBAT 7: SKIES UNKNOWN is a triumph, and return to form.