Far Cry New Dawn is a direct sequel to last year’s Far Cry 5 which, at the end of that game left Hope County (and seemingly most of the surrounding area), in dire straights. This is the first sequel for the series, and it offers a continuation that’s worth following. While the game is designed as a direct follow-up, the events are distanced enough from Far Cry 5 so that players who didn’t play that, could pick this up with little friction. Far Cry New Dawn on its own doesn’t really disappoint, but the connective tissue to Far Cry 5 feels like a step back from what would be another amazing entry. 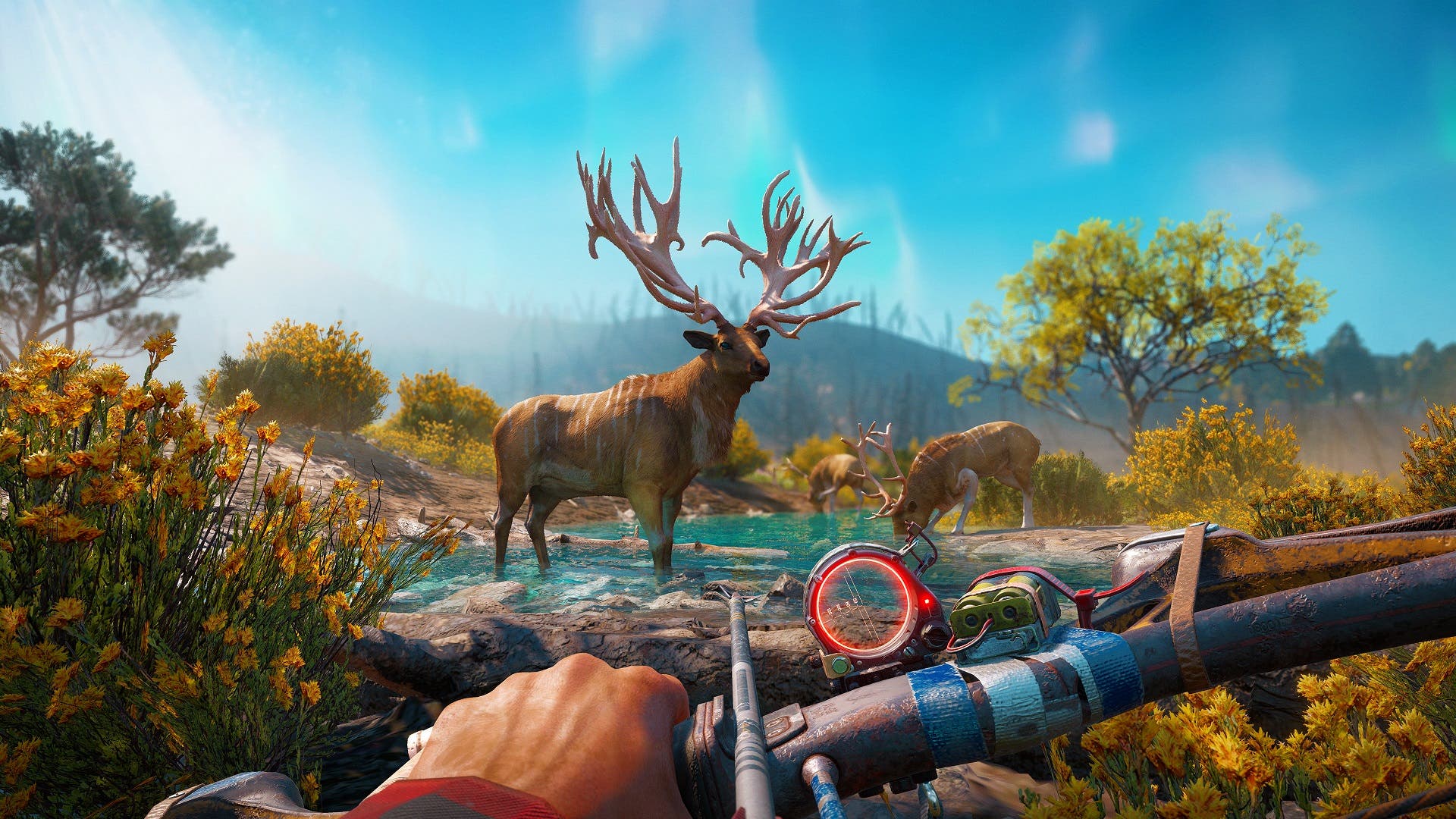 Hope County residents cannot catch a break. After 17 years of rebuilding and peace, a band of seemingly former X Games athletes known the Highwaymen come to Hope County after attacking a train you were the security captain for. Its contents most valuable, mostly a man by the name of Thomas Rush, who goes around the country, helping rebuild broken towns. Hope County wasn’t hit directly, but most of its buildings were flattened or covered. The effects were airborne, as there’s lots of mutated animals, overgrowth, and a pink, lush environment. Sadly, Hope County’s map is roughly 1/5 the size, notably missing many of the locations, serving as a “greatest hits” more than anything else.

The main story can be completed in around 10 hours, and it just isn’t enough time to get to know your allies, and especially not the villains. The story serves its purpose, but it is extremely cliched, even introducing a “the enemy of my enemy is my friend” as a plot device. The game’s villains, “Mickey” and “Lou” don’t have enough background, but their actions are menacing enough to do the job. The game goes so far as to humanize them, undoing the justification of their wicked ways. The newly introduced characters on either side are not as memorable, and almost to an annoying level. Returning characters help tie things together, with the standout being Hurk making yet another return – and I wouldn’t have it any other way. 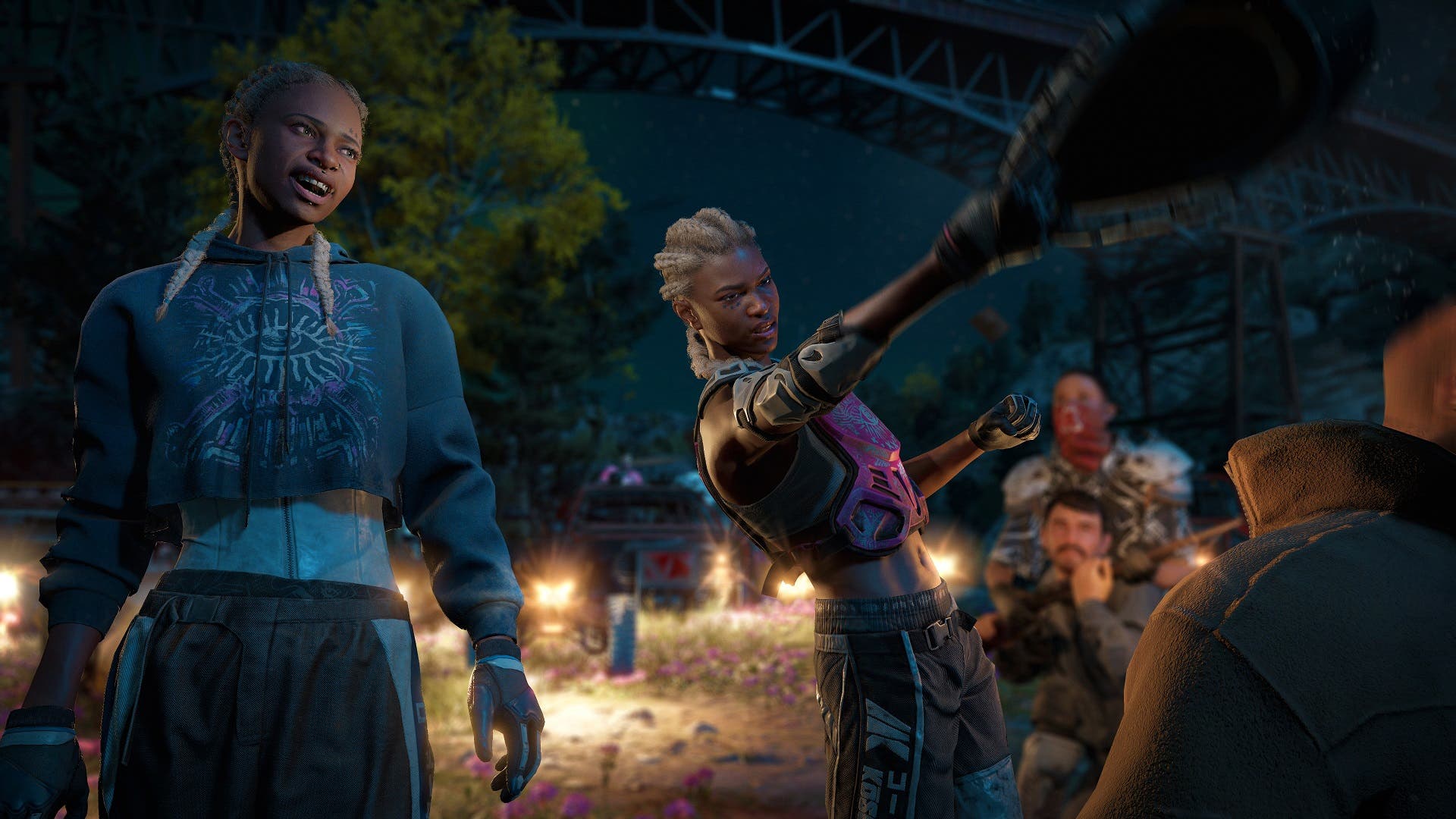 The biggest change to Far Cry New Dawn is what Ubisoft calls a “light RPG approach”. In addition to the health bar, are ranks associated with the enemy that indicates their level and corresponding difficulty. The RPG-ish nature is extended by damage numbers that fly off of a character. You can turn them off, but the feeling of spongy enemies are always there, that previously wasn’t. Enemies and weapons are sorted by Rank I, Rank II, Rank III, and Elite – each with increased pips of health extension of time to kill. For instance, if the weapon and the enemy are the same, gun damage is 1:1 for headshots. If your weapon is of lesser value to an enemy’s rank, your gun feels like a pea shooter. I don’t think having any element of RPG is the right move for this game, and this feels like half-step changes before implementing them into an eventual Far Cry 6.

Ubisoft has also stated that weapons were built for fun, but there’s only one new weapon that strays from the rest of the armory – that weapon is the sawblade gun. It’s the first weapon you craft in the game, but just an hour later you’re tasked with retrieving a weapon for an NPC, which is the exact same sawblade gun that you just crafted. It’s not even a different coat of paint, so you end up just leaving it there because you already probably have the sawblade gun equipped. This aside, customizing your weapons has been removed, removing all personality and choice – you get what you get, and you’re gonna throw a fit. 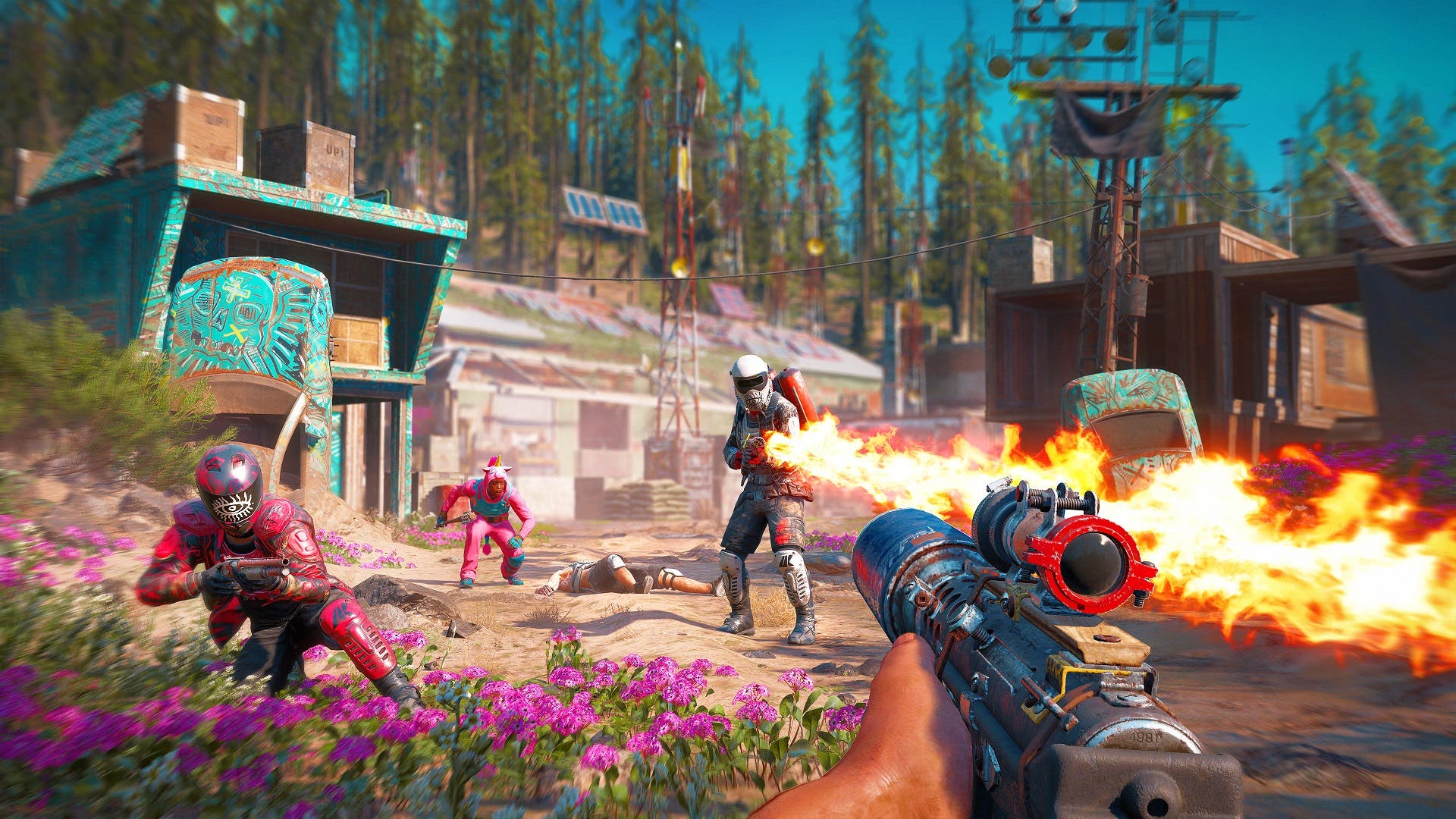 Since this is the post-apocalypse, crafting makes a big return. Resources aren’t plentiful, and it takes lots of scavenging to get the desired items and upgrades you want. The game has a only a handful of resources to scavenge, making it a bit easier to acquire the things you want thanks to maps that reveal their locations. Ethanol has become the primary resource of this nuked future, and it all feels arbitrary to spend all this effort to acquire everything you need. Crafting was not a system I missed, but it makes sense in the context of Far Cry New Dawn.

Prosperity serves as the homebase for all survivors who are just trying to make an honest living in this new world. Over time, you’re building up a place to call home. There are 8 facilities to upgrade, each with their own requirement. The aforementioned crafting and resource gathering really takes some long strides here, as the efforts to collect everything necessary is borderline busywork and the least fun aspect. Since the homebase is a gateway to higher tier weapon crafting, and vehicles, it’s a necessary evil. 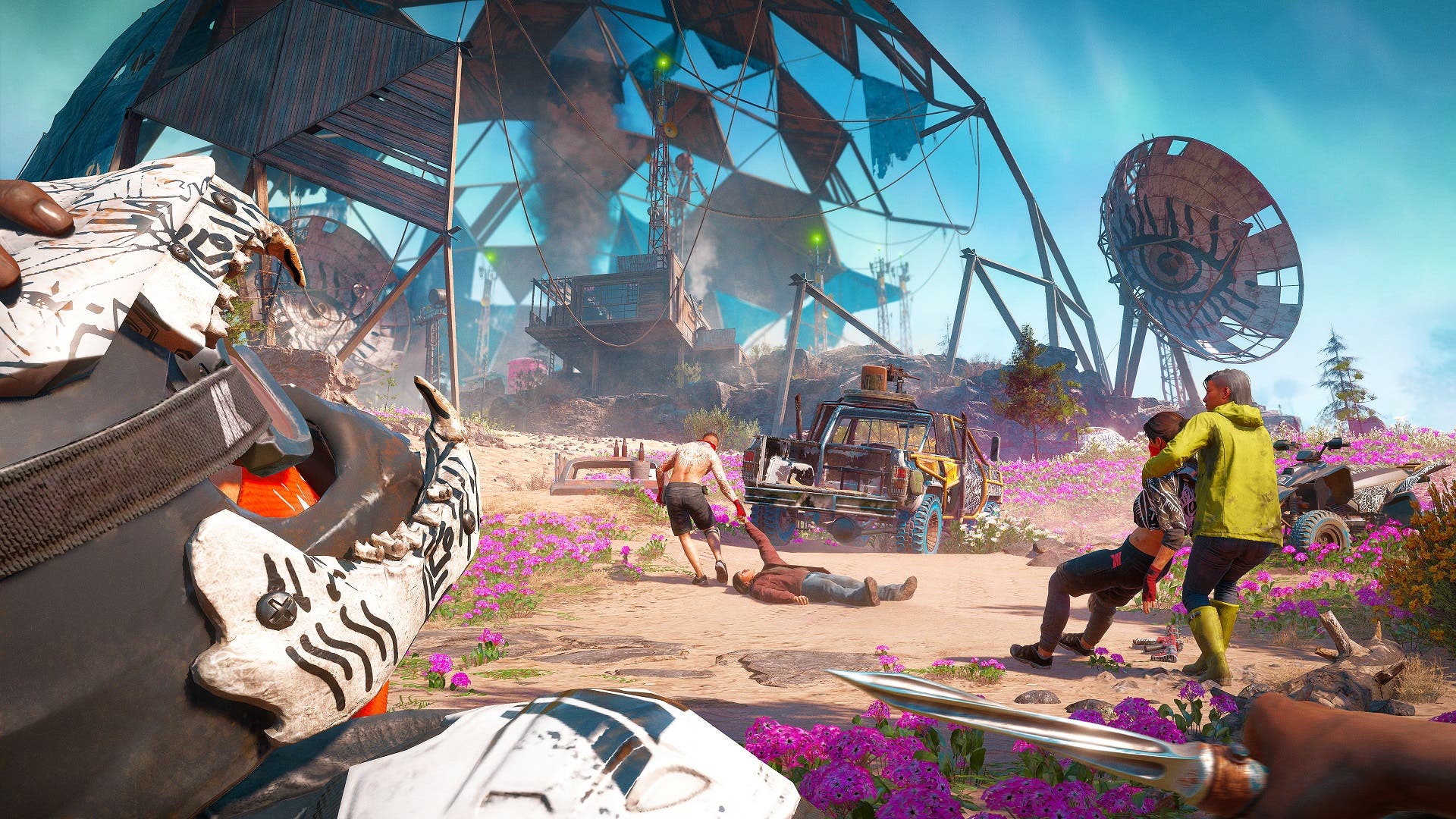 It wouldn’t be a Far Cry game if there weren’t Outposts to conquer. Now, you can scavenge them and let the Highwaymen take them over, now with higher tiered enemies and in larger numbers. Once recaptured, you’ll reap bigger rewards for escalating them. You can do this up to three times before it maxes out, offering a solid challenge and replayability.

Expeditions are new to the game, similar to Wolfenstein II: The New Colossus, you’ll be traveling to real-life locations across the United States to retrieve special packages, taking out enemies as efficiently as possible. This is an underrated, and possibly overlooked mode that shows life outside of the bubble most of the series’ locations take place, offering a more cohesive and larger world at play than at first glance. 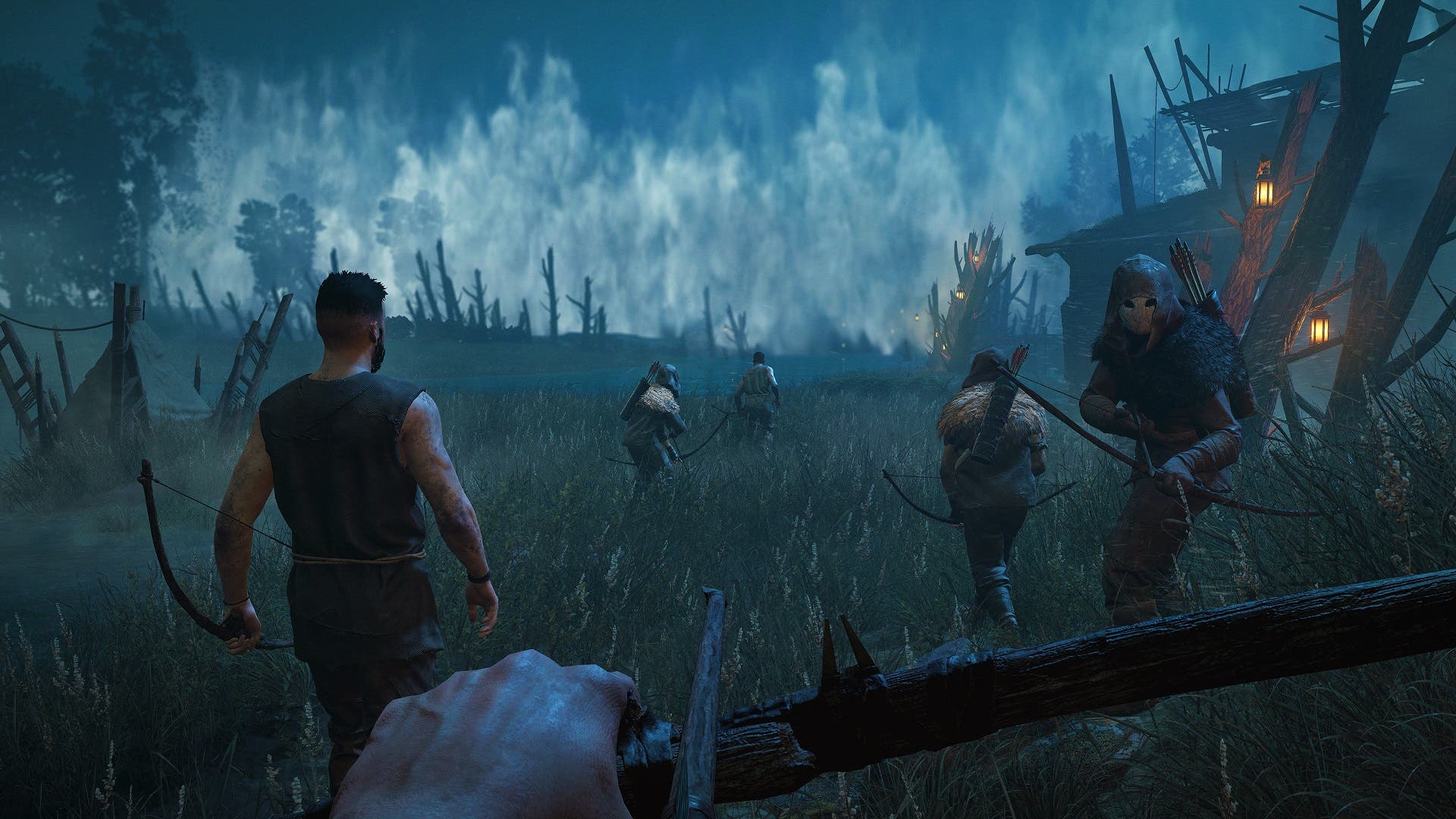 The Guns for Hire you knew in Far Cry 5 are mostly merchants in the game now. The new Guns for Hire must be acquired like before, each with their own personal quest before they become available to join you. Each mercenary has a ranking as well, that the more you use them, the more efficient they become (based on number of kills). You’ll find yourself sticking with them until maxed out, then switching out to the next until you get everyone ranked up.

Supply drops happen randomly across Hope County, and it’ll drop a care package of needed resources. However, going after it means enemies will swarm it. Unfortunately in every scenario when this happens, enemies will spawn out of thin air. The enemies are proportional to your rank, so they aren’t overwhelming to fight. It just appears so cheap when it happens, especially in front of your eyes. 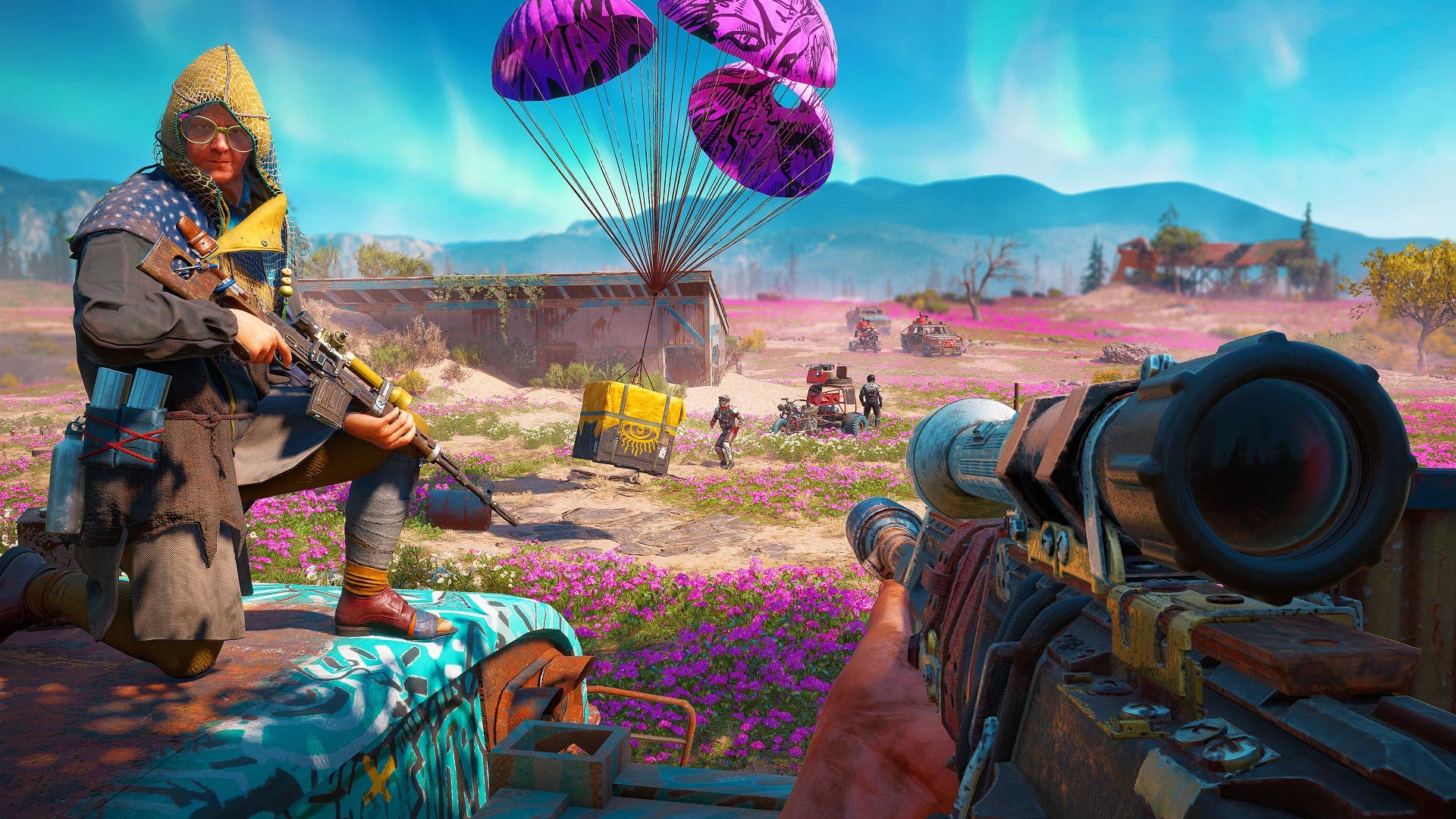 Simply put, Far Cry New Dawn looks amazing. While not only looking better, but in most cases performing better (possibly do to many less resources visible at any one time). Every visual just pops off the screen, and is an absolute delight to look at. A vibrant post-apocalypse is not commonplace, but makes it so easy to play around in this gorgeous sandbox.

Far Cry New Dawn is all over the place, as crafting and resource gathering slow the game down. The RPG elements are unnecessary and not at all fitting for Far Cry. The story moves at a feverish pace, and ultimately stumbles across the finish line with underdeveloped characters, grinding materials for upgrades, and a lackluster finale. With all of that said, the shooting, stealth, and open-world are still an absolute joy. And Far Cry New Dawn finally ties up some loose ends that were dangling in Far Cry 5. Far Cry New Dawn makes the apocalypse overwhelmingly colorful, fun, and an exciting twist on the environment of Hope County.