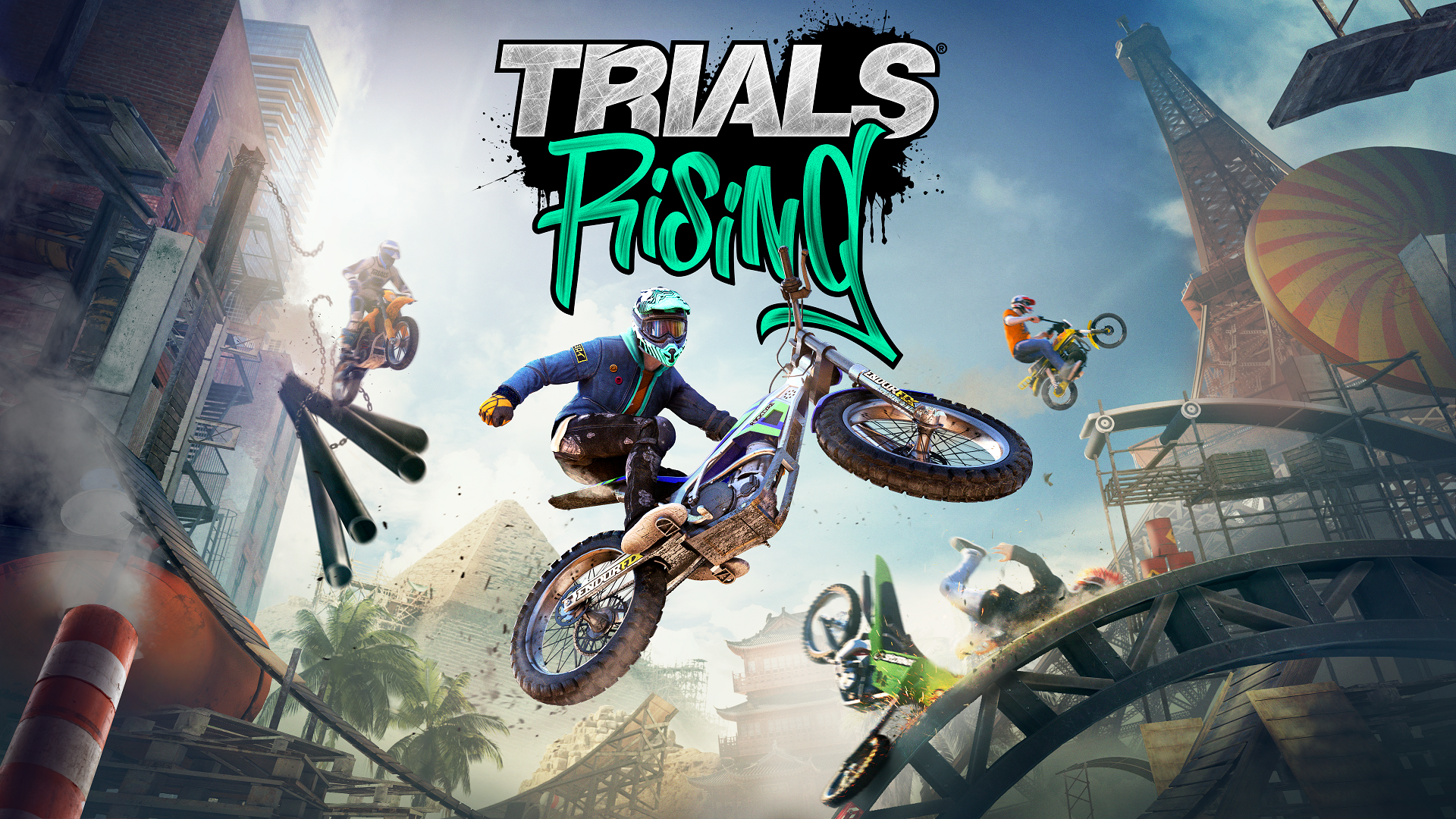 Trials Rising feels completely refreshed by taking things back to the present from the far-flung future of Trials Fusion. To begin with, all of the locations are mostly urban landscapes that tours the world with the over-the-top antics the series is known for. It then has had a completely new visual identity which looks crisper and better than before. Gone is the trick system which betrayed what the series was best at. Trials Rising is like a phoenix with renewed youth. For the uninitiated, Trials Rising asks you take a rider on a dirt bike, and go through ever-increasing obstacle-laden tracks int he fastest way possible, by using checkpoints the least amount of times as possible. The name of the game derives from this being about time trials. To reach the finish line, you must lean your bike, and use gas and brake with care in order to become the best. Each subsequent level requires finesse and precise movement, and later levels essentially become physics puzzles by how you have to angle your bike. If you’ve never played the series, or are even returning, the game now features proper tutorials known as University of Trials that will help you learn the nuances.

The Trials games live and die by the bike selection. There are six in total, with three being the main ones. Some bikes are locked behind in-game currency. This is fine, but a shift from what’s previously been the way to obtain the bike, and the in-game currency comes fast enough. The most hilarious addition is that of the tandem bike. The tandem bike tasks two players to control gas/brake independently of leaning. It’s this alone where tandem play will induce hilarity, and lots and lots of tears. This is the best thing Trials Rising offers, even if it is not the way to play the game.

The idea of traveling the world gave RedLynx a great opportunity to create unique, and varied looking locations matching the place that they take place in. On variety alone, this rivals all the other Trials games to-date. Every track has its ups and downs, but there are particularly memorable tracks. For me, it’s “Siberian Train”. This is where I got nearly decapitated by a railroad overpass. It was such a surprising and hilarious thing that I wasn’t expecting. Each track has high and low paths that you can traverse, some save time, others waste it. Often times paths will crumble or completely collapse underneath you. Being able to recognize, or otherwise know these things ahead of time are the what will get you a gold.

There’s a lot of new modes and activities to the game. Skill games return, offering familiar themes and concepts, but a better execution on them. Challenger mode asks you to take on 3 other opponents with limited retries in order to beat them. Stadium races are back, previously relegated to the multiplayer modes, now are incorporated into the single-player. The end of them feature finals, which are an endurance of sorts, in which you must place first in each of the three races to be declared the winner. Returning are user-created levels for players to showcase their creativity, and already there are some outstanding levels worth finding.

Track selection is a bit of a mess in Trials Rising. The map is just an awful experience. It’s unintelligible, and hard to distinguish new from old, as iconography seemingly has no meaning. You can filter by completed and not completed events, but that should be easy to decipher without doing so. I’d like to see this wholly replaced, or an alternative version in which you can just view the tracks, sorted by difficulty to see rating and whether you’ve raced it on or not. I like the map idea, as it is visually distinct, but it’s represented so poorly that it’s a chore to navigate.

Trials Rising‘s form of experience is called fame. You’ll earn fame no matter what you do in the game, but the biggest gains are going to come from getting golds in every event you participate in. Often times, you’ll be gated in your progress, whether it be accessing a faster bike, or a new level or challenge. To get there, the game demands you grind prior levels for a higher rating, to eek out the last bit of experience to open the new areas up. It’s an unnecessary blocker. The game’s contracts system can help with earning more fame by completing specific challenges like simply beating a specific ghost, or by doing a set number of backflips, as examples. I like replaying levels because I want to, not because I have to.

Loot boxes appear in Trials Rising as “Gear Crates”, and they’re simply bad. I mean, on their own, they are fine because they only contain cosmetic items. I’ve just encountered so many duplicated items in so few hours, that other games simply do it better. Overall, the customization is ripped wide open in this game. You’re able to select different pieces, color them, and add a plethora of stickers to them so that they are completely yours. But given the low rate of new items, you’ll be stuck for a long while wearing the same crappy items until you get anything new you actually want to equip.

There are two forms of currency in the game, Trials Coins and Acorns, but they come in limited supply for actually earning them. As you can purchase with real-money to get more in-game currency, it’s not a good look. It’s nothing egregious, but its existence isn’t the greatest implementation alongside the crates.

For whatever reason, Trials Rising suffers from some really long load times, even with an SSD on PC with more than the recommended specs. I hope this gets optimized in the near future, as it’s a lot of unnecessary waiting that wasn’t present in the last game. The menus also feature some sluggishness when navigating them. Outside of that, the game runs fantastic, if only to complain that it’s capped at 60fps. 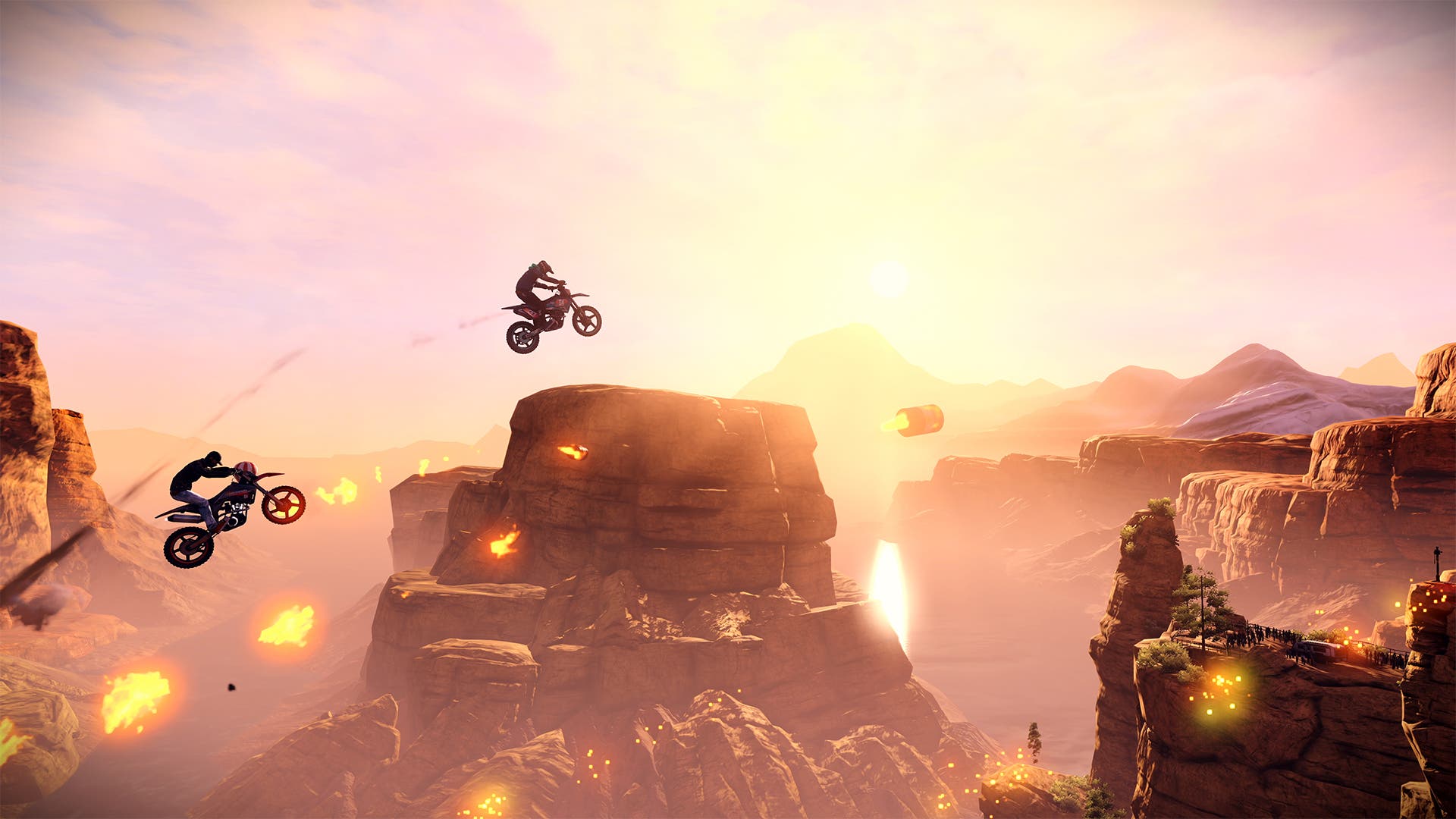 After Trials Fusion, it was unclear where the series would be going from there. Trials Rising feels refreshing and more down to Earth this time around. It never fails to impress, make you laugh, or affirm you’re in complete control. This is a game that’s always fun to pick up and play, even if the things like gear crates and load times on the periphery aren’t. It’s clear RedLynx haven’t run out of tricks yet, and Trials Rising cements that – this is the best Trials has felt yet.