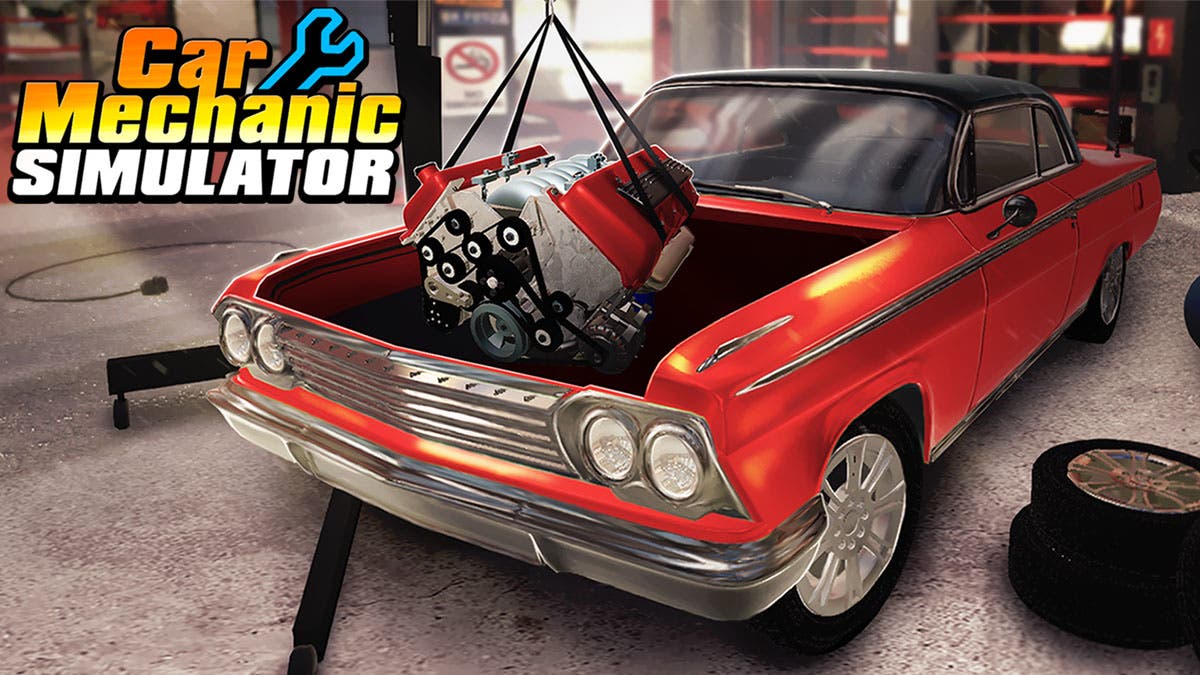 Car Mechanic Simulator has been around a few years on the PC market with the latest incarnation being Car Mechanic Simulator 18. It’s your standard fare simulation game as you run a business and earn money to keep the lights on. To my genuine surprise, a Nintendo Switch port is out and even its flaws, it’s not the worst thing I’ve played. 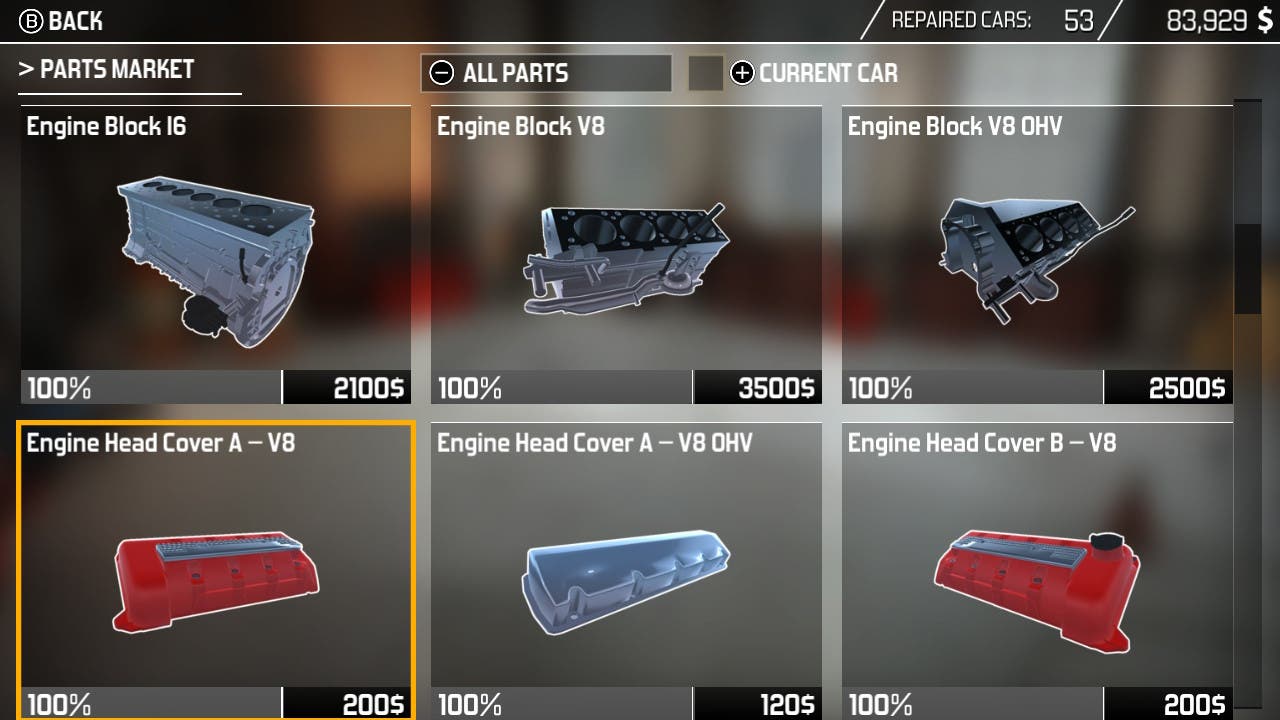 When I first heard of the port, there was a sense of bewilderment. I’ve played the PC versions and was questioned to myself how they would handle the small details of repairing a car. On the PC you have a mouse to highlight and interact with things, not so on a Switch. After installing the game though, it was clear to me that they simplified things quite a bit; this was going to be a bare-bones Car Mechanic experience. The first thing you’ll notice is there are no licensed cars to speak of, unlike the more recent iterations of the game. Second, there is nothing to work towards. They allow you to upgrade your tools to work on more types of cars, but that’s it. You don’t get to build your own cars from scratch, you don’t get to upgrade or modify your shop, you can’t even drive the cars you build. As I’ve mentioned earlier, it’s all just bare-bones. The process goes like this: you go to your map and look for a barn to “purchase”. The barn contains a broken down car to restore and sell, that’s it. I find it silly to wrap the purchasing of the car around the idea of a barn find. Might as well just say “buy this clunker”. 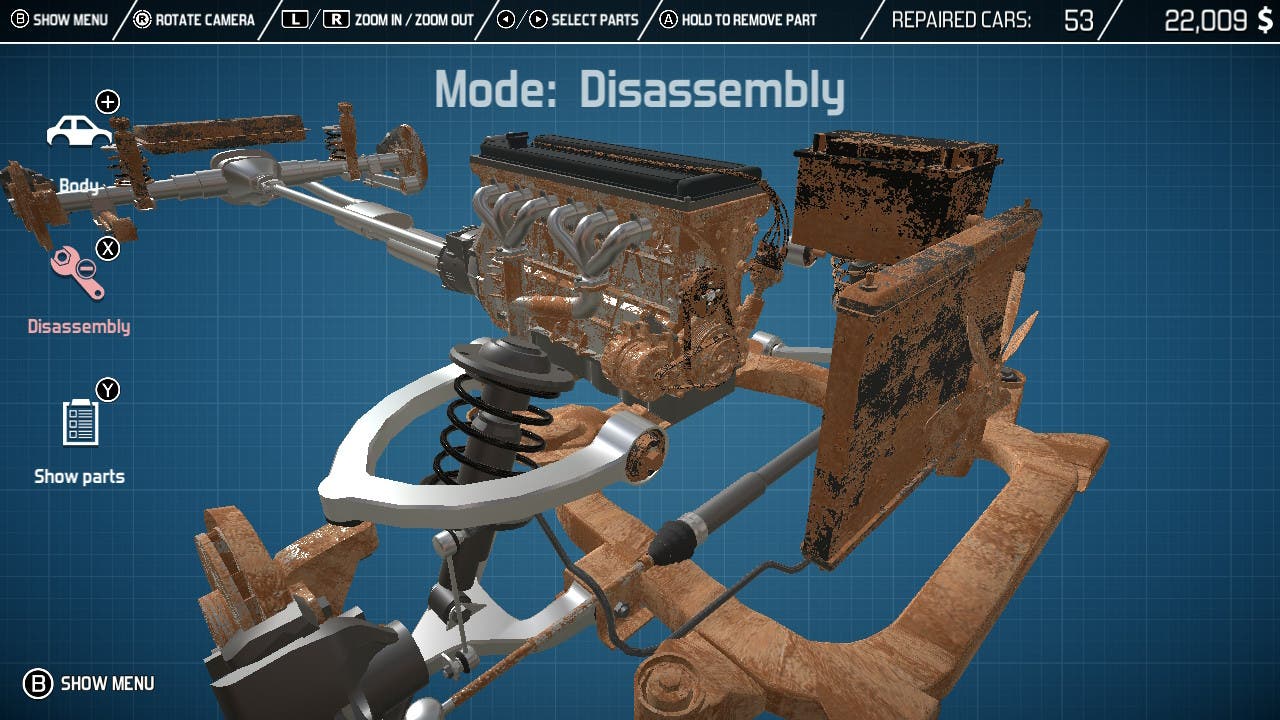 So let’s get into the actual mechanic-ing part of things. Using your starting cash, you’ll buy the piece of junk and head off to the garage. From here you can choose to work on the engine or the body. I always start with the body as that takes seconds to finish. You’ll be asked to repair rust spots by rotating the joystick or you can utilize the Switch’s touchscreen to rub them in a circular motion. Once they’ve been cleaned up, you can paint the car any color you want. Curiously, certain colors cost more than others which seem to have no positive effects on your end sale price. You can store cars you’d like to keep, but why? All you’d be able to do is look at them. Getting past the bodywork gets into the real meat of the game though. From the engine menu, you get to see the internals of your derelict. The game represents poor conditioned parts as rusted, so it’s easy to see what needs replacing. But tap a button and the car parts explode out and the game will highlight which ones are bad. The idea itself isn’t terrible, but I was disappointed to see that I couldn’t select the parts that needed to be replaced from here. To remove the parts you have to go back to the standard view. 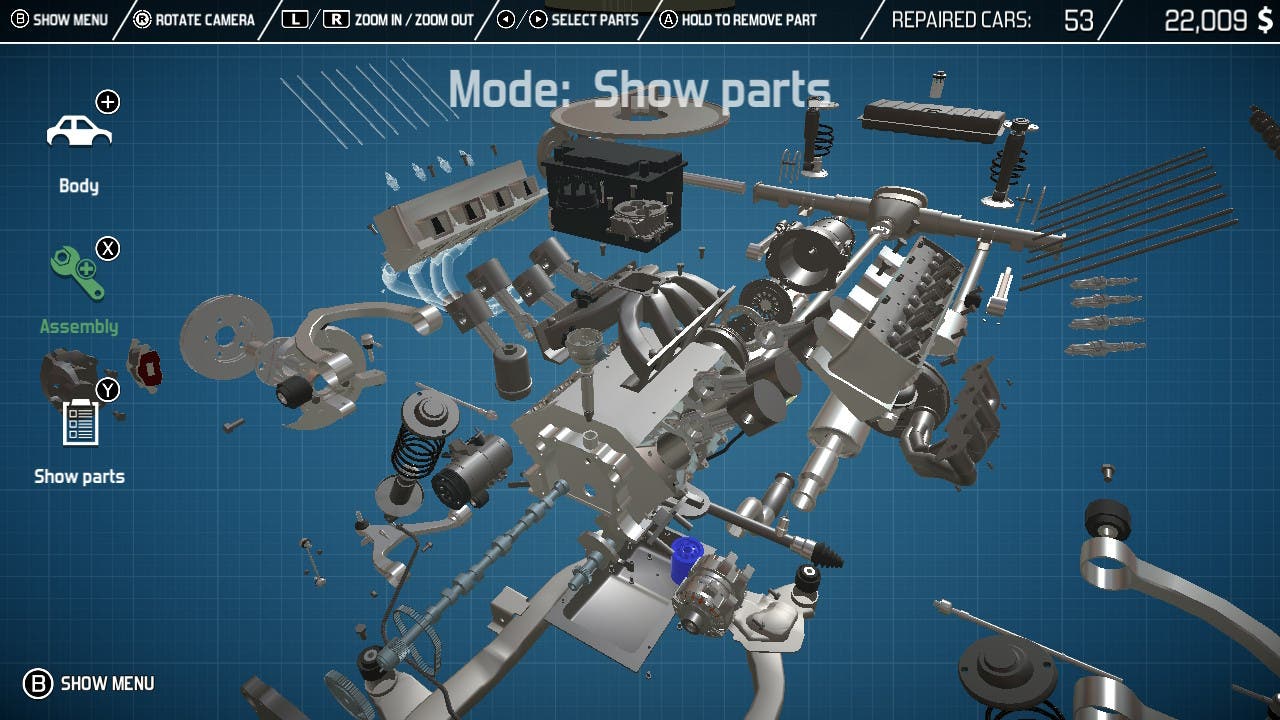 Unlike its PC counterpart, you don’t have to worry about nuts and bolts. You just select the part to remove and the game removes it. You do have to remove parts in the proper order through, so if you need to get to a belt pulley, you have to first remove the belt. What’s nice is that you can use the touchscreen to tap away parts or use a combination of touchscreen and button presses. I found myself doing both depending on what was comfortable to me at the time. Once that parts are removed, you can head on over to the parts shop to buy the replacement parts and then head on back to the garage to install them. You can also view all the parts that need to be replaced on a worksheet of the car. Strangely, they’re not listed in any sort of order. Not alphabetical or grouped by type. It adds a layer of frustration that shouldn’t be there. The part catalog is listed by type and alphabetical so that was a sigh of relief. What I would have liked to have seen though would be the list of parts to buy on one side of the screen or a marker on the part that needs to be purchased. Otherwise, you’re going by memory or writing down outside of the game what needs to be bought. Once the process is complete the game will give you a notification that the car’s repaired. Sell it and make a profit, use those funds to buy a new car, then rinse and repeat. The game is so simplified over its PC counterpart and the touch screen controls function well, so I wondered if this was actually a mobile port. Sure enough, there it was on the iOS App Store, released over a year ago. It’s the same game but free-to-play, while the Switch version is $15. 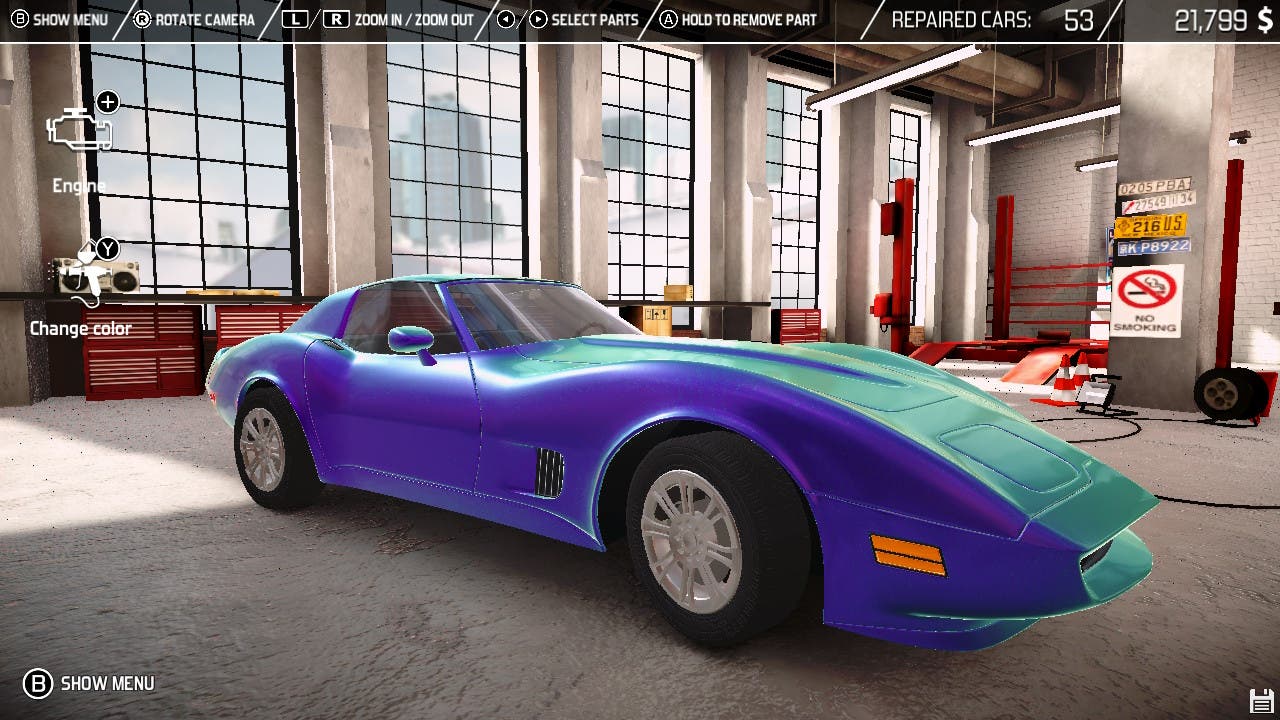 With the game being as bare-bones as it is, I wouldn’t recommend this at $15. They just don’t give you a good motivation to keep playing, you’ll have done everything and experienced everything within an hour or two. What the game does do well is in its presentation. Menus are well done, touch controls are responsive, and the button assignments are well placed. Heck, the game even looks nice on the Switch. It’s just a shame that there is no real depth to the title. I would like to have seen more of the PC game in the Switch version but keep its simplistic part replacement mechanic. For a mindless session of play, it’s good, but don’t expect to get much more than an hour or two of fun here.