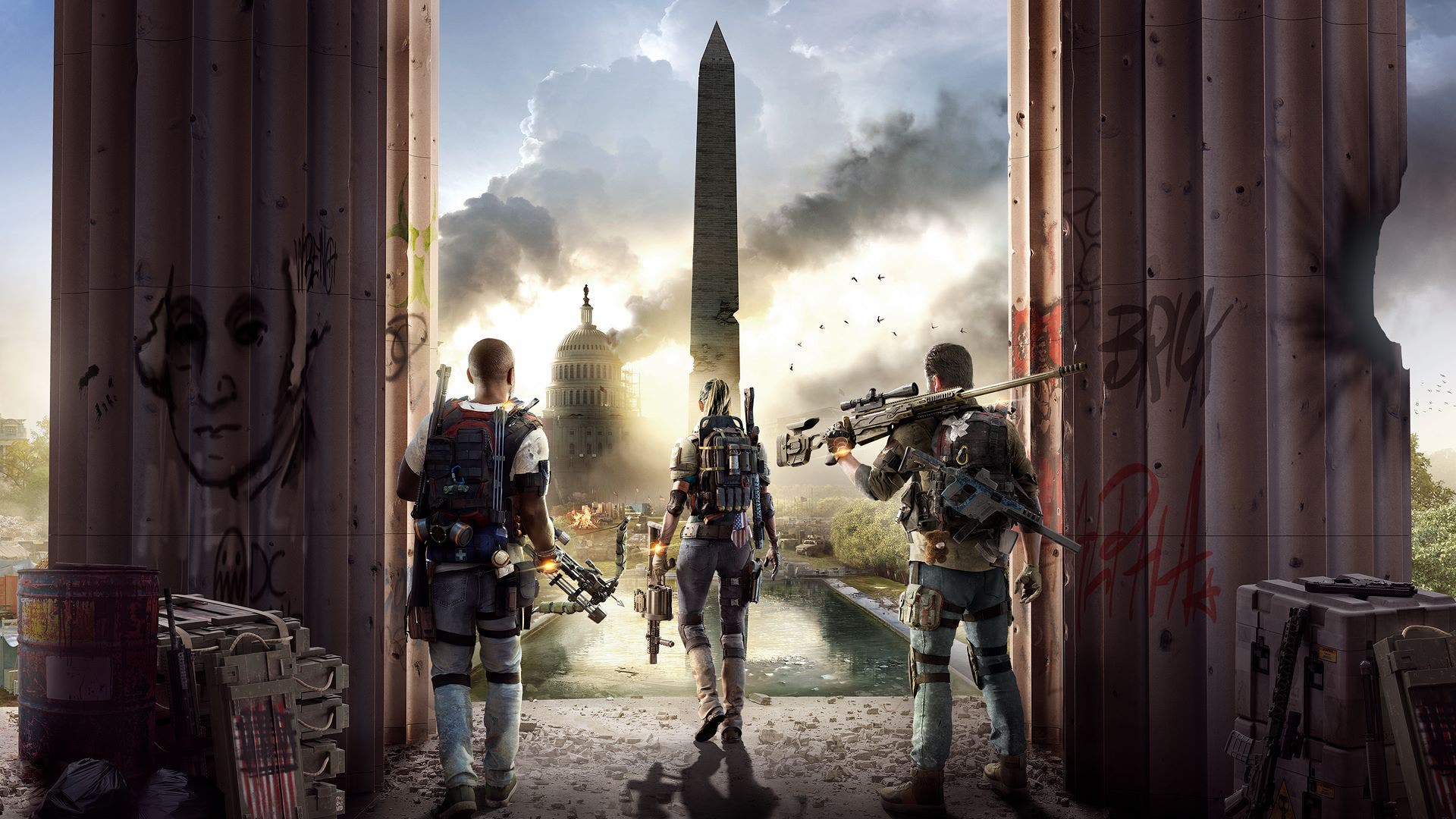 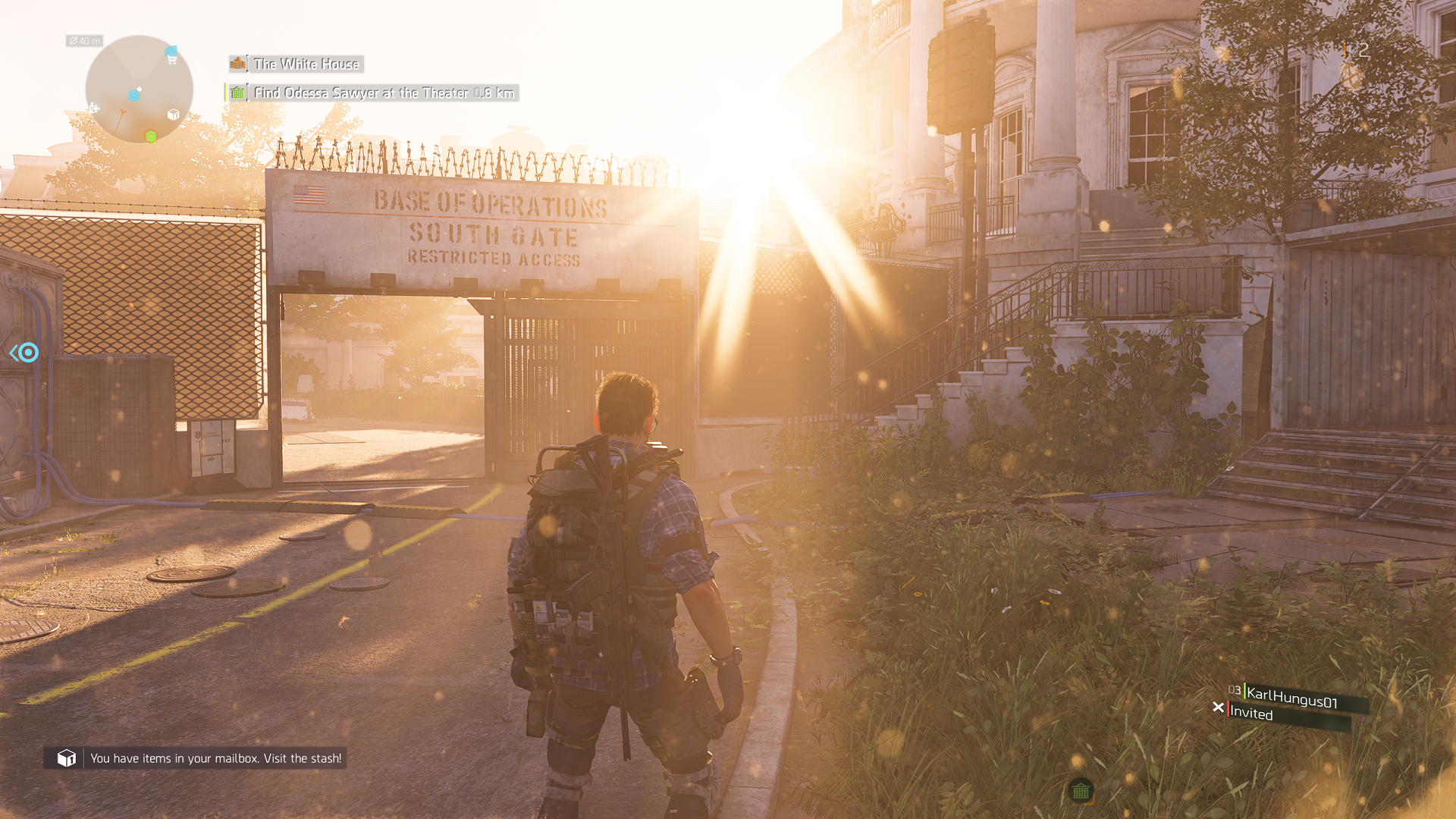 The story picks up 7 months after the conclusion of The Division. You create a new agent sent to Washington D.C. to help bring order to the chaos of the factions that have begun taking it over. The current threat at the time is The Hyenas, but also the True Sons have started encroaching. There’s certainly questions to ask regarding a sleeper mercenary group of federal agents, but that goes out the window with when the mystical elements when any skill is cast. To get things started, you have to make your way to a new base of operations, which is you guessed it: the White House. As before, The Division 2 is designed with coop in mind. So not only does the game offer this option early into the game, it will now scale all players to the highest level person in the group. Now no one can feel left out.

What you do from there is up to you, but you’ll want to go and help settlements of civilians, and get them to grow and prosper. Because now, civilians are no longer helpless, they are doing their part to create change and stop the madness. You can contribute to projects by donating old gear, or by completing activities in a given area. Doing so will net you a lot of experience, and upgrading the settlement to perform better and defend itself. Other things to be doing is finding collectibles, visiting historic monuments, and just exploring. Simply exploring will uncover areas, and come across unique events which will always net you experience. If you’re ever at a loss for what to do, the game itself offers “recommended missions” in the main menu to keep you on task and always progressing. It’s really refreshing, and The Division 2 is not shy to show you what there is to do. 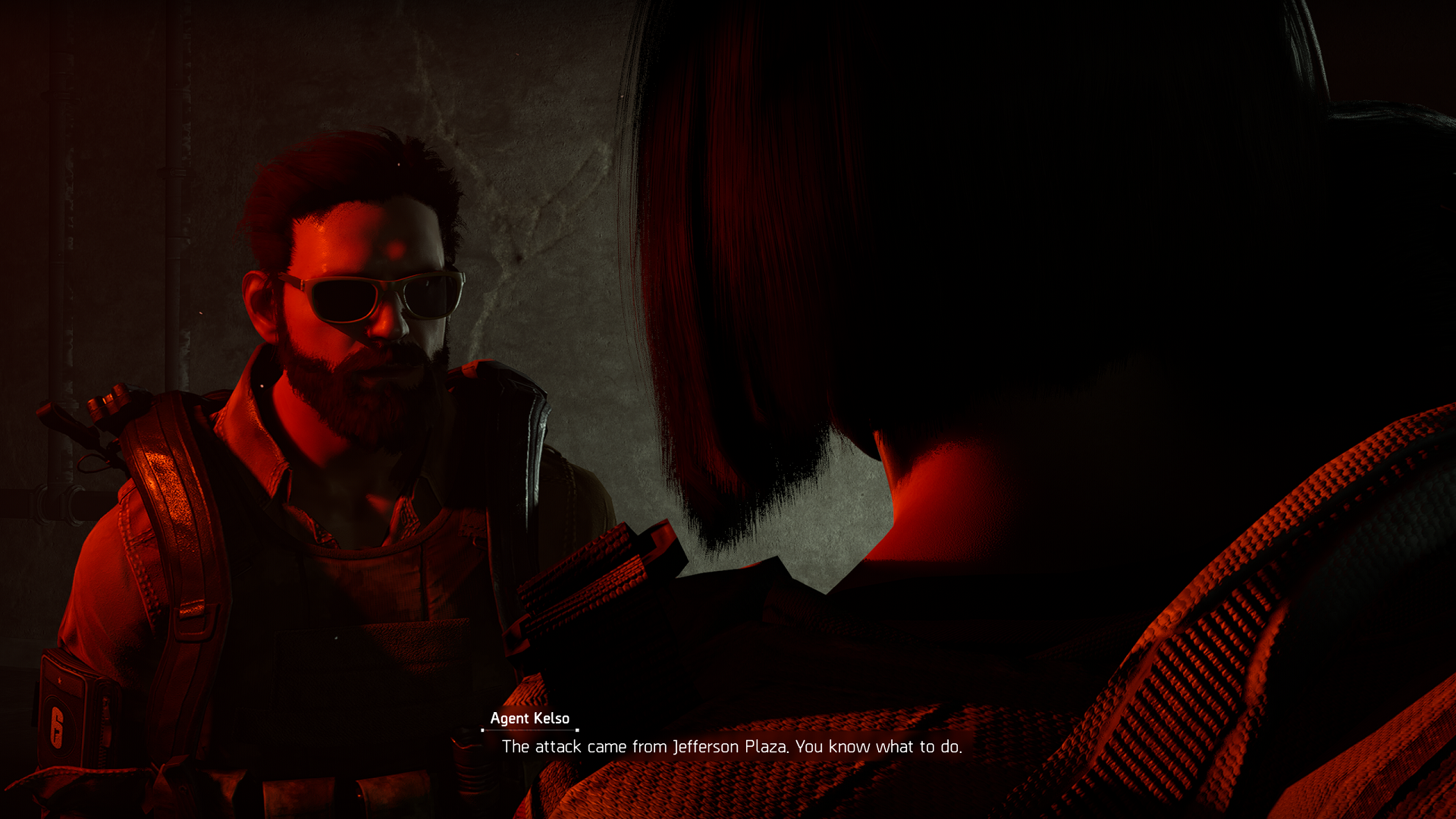 Tom Clancy’s The Division 2 has again RPG elements backing the shooting, so at times enemies will appear to be bullet sponges. Once you get used to this, it becomes more manageable to deal with. Still, nailing headshots and unloading tons of rounds becomes second nature and you get rewarded for playing smarter. You are comprised of armor and health. Armor is the white, chunked bar on top that once depleted, you’ll start to take health damage. Health replenishes, but armor will only do so in chunks. Anything missing will need to be replaced through a limited set of armor plates, which can be replenished from drops or at safehouses.

Perks will bolster your base abilities, inventory slots, and net you bonus experience for staying alive or getting many headshots. You also get swappable skills, eight of them in total with three to five variants of each. While not drastically different than The Division, you’ll see most of them in tact as they were previously. New to the game is the Chem Launcher, which can be tailored for healing teammates or destroying armor of your enemies. Also new is the Hive which is a very textured pod which houses microbots (not of the nano variety) which can do similar things, but all are designed to do things at range. Finally, the last addition is the Firefly, it can do a small airstrike of attacks or health-spewing vitality in quick succession. All of these systems and skills work in concert with one another, especially when in a team. And it should be noted that all of the skills look mystical when used. From the chem launcher to anything with healing, the auras, glows, and overall practicality of their existence definitely distances itself from any kind of reality. 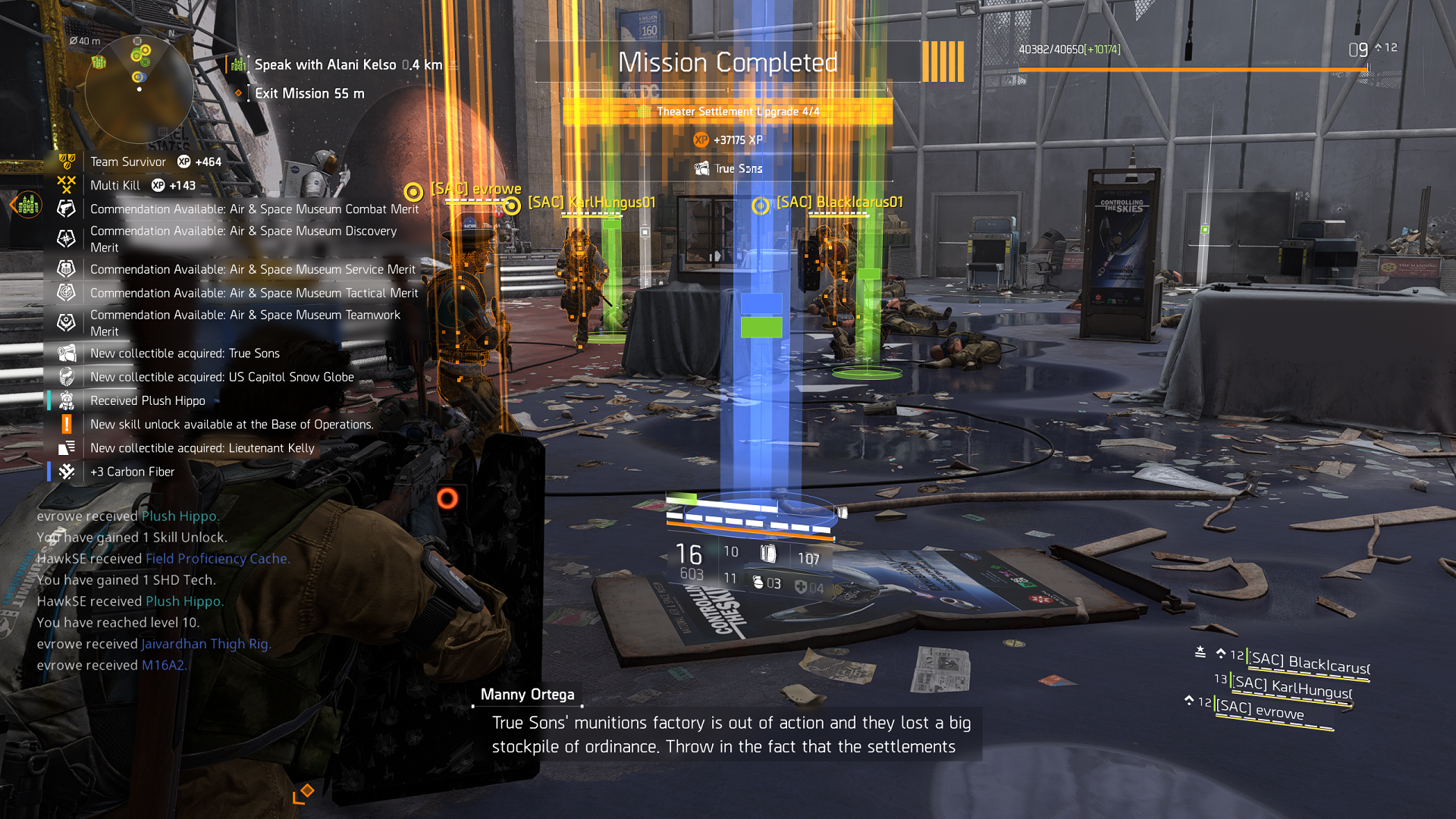 Main missions are obviously what moves the story forward. They are incredibly well done, but not the only mission type of high quality. Now, I don’t remember all the events that happened, but I do remember each place I’ve visited. And that’s important in that the setting carries a lot of weight. You’ll remember fighting it out at the National Museum of American History, Lincoln Memorial, and even a downed Air Force One. However, the fact that a mission has you stealing the Declaration of Independence back, just shows that the game wants to have some fun with things too.

Side missions are relevant and exciting things to do, that are on par with the main missions even though they are tangentially related. Some of them ask more questions than answer, and others are just plain weird where an encounter leaves you stunned for a full minute before it just abruptly ends. There’s a lot of activities to do like capturing strongholds, stopping propaganda broadcasts, capturing control points, and completing bounties which is to kill a heavily armored named enemy. All of which are exciting to do. Some of these are more challenging solo than in a group, but all the same fun.

There’s certainly the guise of repeating the same task throughout the game, but the trick is to make it feel as though you’re not doing that. Ubisoft Massive have done this perfectly. That in addition to the feedback loop is constantly rewarding even if the gear isn’t, is where The Division 2‘s strengths lie.

Ubisoft Massive was very thoughtful in designing the AI. There will be times when you or your coop buddy’s armor breaks, and the AI will charge them because they know they’re weak. Or the inverse, when you see an enemy’s armor break, you can put more pressure on the enemy or rush them to go for kills. The AI is smart and aggressive, in all the right ways. They are still predictable, but varied enough. It all feels dynamic when in any encounter.

Weapons get a bit of an overhaul. Now slotted better into categories, you’re better able to sort them and determine which is better when comparing them. In addition, the best change is that attachments are universal. Once you have an extended mag or an underbarrel grip, it exists for all weapons. Attachments now come with trade-offs. So by increasing one element, you’re decreasing another. It’s a bit weird, but you end up getting used

Ubisoft Massive has thought of everything. After you reach the maximum level of 30, where the release version of The Division would once stop, is not where The Division 2 ends. In fact, this is like an entirely new game. Because, a new enemy emerges once you oust the Hyenas and True Sons by capturing their major strongholds. Their name? Black Tusk. It’s absolutely frightening, and they back it up. These enemies provide a real challenge. Any control point captured will be taken over, and you’ll have to retake them for yourself. It’s almost like a New Game+ in a lot of ways.

Now you’ll be looking for top-tier weapons of the exotic variety, focusing on gear score, and settling on gear sets that provide the best bonuses. While there isn’t any more proper story to do, there’s invaded world events, and high difficulty missions classified as “World Tier 4”. All this amounts to, is that you won’t be out of things to do come end game. In fact, the end game is a new beginning for level 30 players. The unfortunate thing about The Division 2‘s Dark Zone, is that it assumes you know how to play it. It is something you can learn pretty quickly by playing or reviewing its short pop-up tutorials, it still asserts you have a baseline knowledge. Like the first game, you’ll be accruing experience and amassing a different level from main game here. There’s three zones across Washington D.C. to take part in, each with a certain range of levels that correspond to your Dark Zone level. As you level up in the Dark Zone, you’ll unlock perks as part of a skill tree that can benefit solo players, or those who play in a group.

There’s always the goal of extracting high-level gear that can only be found in the Dark Zone. This can be done by taking down NPCs in the zone. Alternatively, or in addition to, you can go rogue and attack other Division Agents for their gear. When you’ve filled your inventory, or are ready, you’ll signal for extraction and have to defend your position to extract your gear, which can be intercepted at any time until the helicopter with the gear leaves.

This is the pure multiplayer experience, or otherwise straight up PVP aspect of The Division 2. This is where you can go to one of three locations with normalized gear for all players to fight in a Skirmish (think Team Deathmatch) or Domination (think Call of Duty Domination). Rewards from playing trickle back down to the main game here as well. For those looking for pure combat will enjoy this mode and is a nice break from the PvE. It’s hard not to notice this game visually, and it should be talked about. The details of every object, to the density of every scene is of immense quality. It’s clear there was a focus on recreating Washington D.C. with the highest accuracy, and it really looks and feels like it. While it isn’t as iconic as New York, I’d argue that D.C. is a more interesting city and the American history elements at every turn are more exciting. I played the game entirely on PC, and it’s worth noting the game runs better in DirectX 12 than DirectX 11. DX12 does have its bugs and crashes. At all times, I was able to have the game running between 90-100fps with most settings turned down from Ultra in 1440p. Tom Clancy’s The Division 2 is not only an amazing game on its own, but is a visual spectacle that absolutely excels on PC. Tom Clancy’s The Division 2 is absolutely packed with content and things to do, and those things to do never, ever get boring. There’s so much to talk about still, but this is such a wonderfully crafted game. With such a focus on longevity and setting the bar so high for quality of activities, it gives me the confidence in this game, and its future updates. I’ve never before seen such care taken into account for all players at every turn of a game. This is the most improved sequel ever made. Tom Clancy’s The Division 2 is simply astounding.