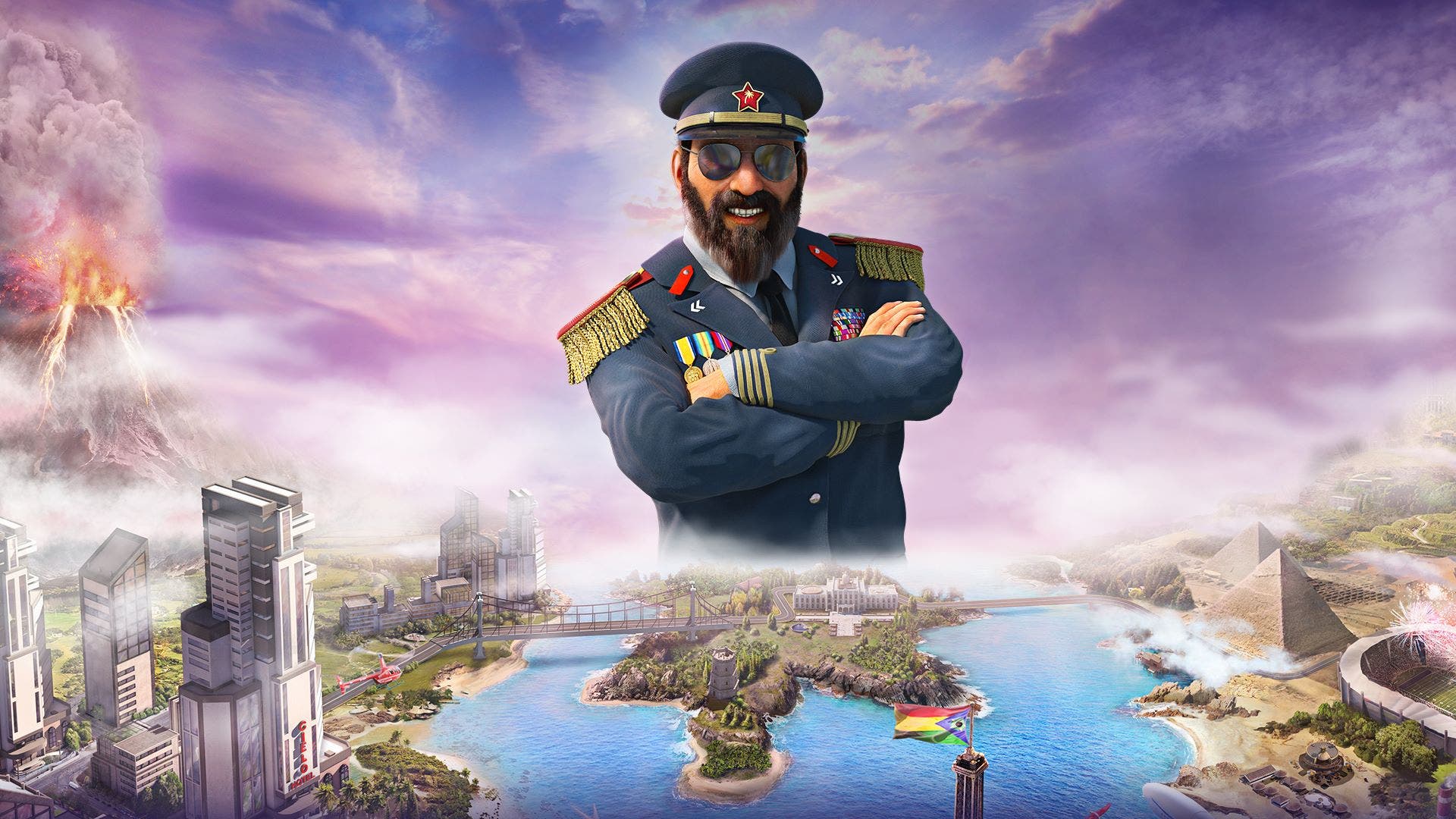 Limbic Entertainment has breathed new life into Tropico that seemingly had offered all it could with the last entry. Tropico 6 eschews the things that didn't work, keeps the things that did, and introduces tons of great new features. I enjoy how the way the new systems play off of one another, that landmasses change how traffic is shaped, the genius levels of pirating world wonders from their original locations, all adds up to a streamlined offering that lets the personality shine through. Tropico 6 doesn't miss a beat with its latest entry, even with a new developer behind the series - in fact, it is the best of the series because of it.

Abraham Lincoln said, “Whatever you are, be a good one.” Tropico 6 tasks you taking up the mantle of El Presidente once again, a leader who is molded by the player’s actions. This being the sixth entry for a series that debuted in 2001 has had its ups and downs. Limbic Entertainment takes the helm from Haemimont Games who had been working on the game since Tropico 3. What results is an absolutely refreshing take for the series, and makes Tropico 6 the best one yet.

Tropico 5 stayed the course, made some odd changes, but ultimately was a good Tropico game. For Tropico 6, Limbic set to throw out the old, and bring in the new. For starters, there are archipelagos, a series of islands you can chain together using bridges and tunnels to be a more realistic depiction of tropical islands. In addition, there are now research systems to progress towards new unlocks. While not a huge change, 4x speed replaces 3x speed altogether, offering 1x, 2x, and 4x speed for time advancement. This change is just small enough to make the game speed feel just right.

Gone is the Dynasty system. No longer do you have to worry about heirs or carrying on a legacy, as that felt like restarting over passing traits on. Your El Presidente is no immortal as they once were, thankfully. Now you don’t have to deal with the attempts to be a faux 4X game by exploring and uncovering a fog of war. It was neat, but needless. What stays is the eras. There are four in total: colonial, world war, cold war, and modern times. Lastly, election speeches return, offering a lot of choice in delivering the speech, and what results is immediate feedback of how well or not well it went. These can change the tide of elections, and each game you play.

When you start the game, you’ll get to choose your El Presidente. There’s still no named characters, but they’ve toned down the ridiculous character customization to a handful of outfits that’s a lot more manageable. At the end, there’s a single personality trait you can assign. The offering of personalities offer buffs or debuffs. For instance, there’s a bonus to standings with factions, 50% gain for praising factions in speeches, or El Presidente becomes a workaholic, which can be problematic when you need him to visit places to boost morale. I chose “kind of normal” which is the baseline and doesn’t have any gameplay changes. The inclusion of this is really neat, I feel like this will get overlooked really easily.

You’ll also have the ability to customize the palace. You’ll be able to setup the type of grace, pathways, and extras, like a giant aquarium that rests atop the palace. This added customization fits right in, and was something I spent far more time doing than customizing El Presidente, if that says anything. In starting the game you’ll have buttons that zoom out to view the archipelagos at once, or zoom in to the El Presidente at large. In all cases, you’ll have full control and view of the things you want to see and do. 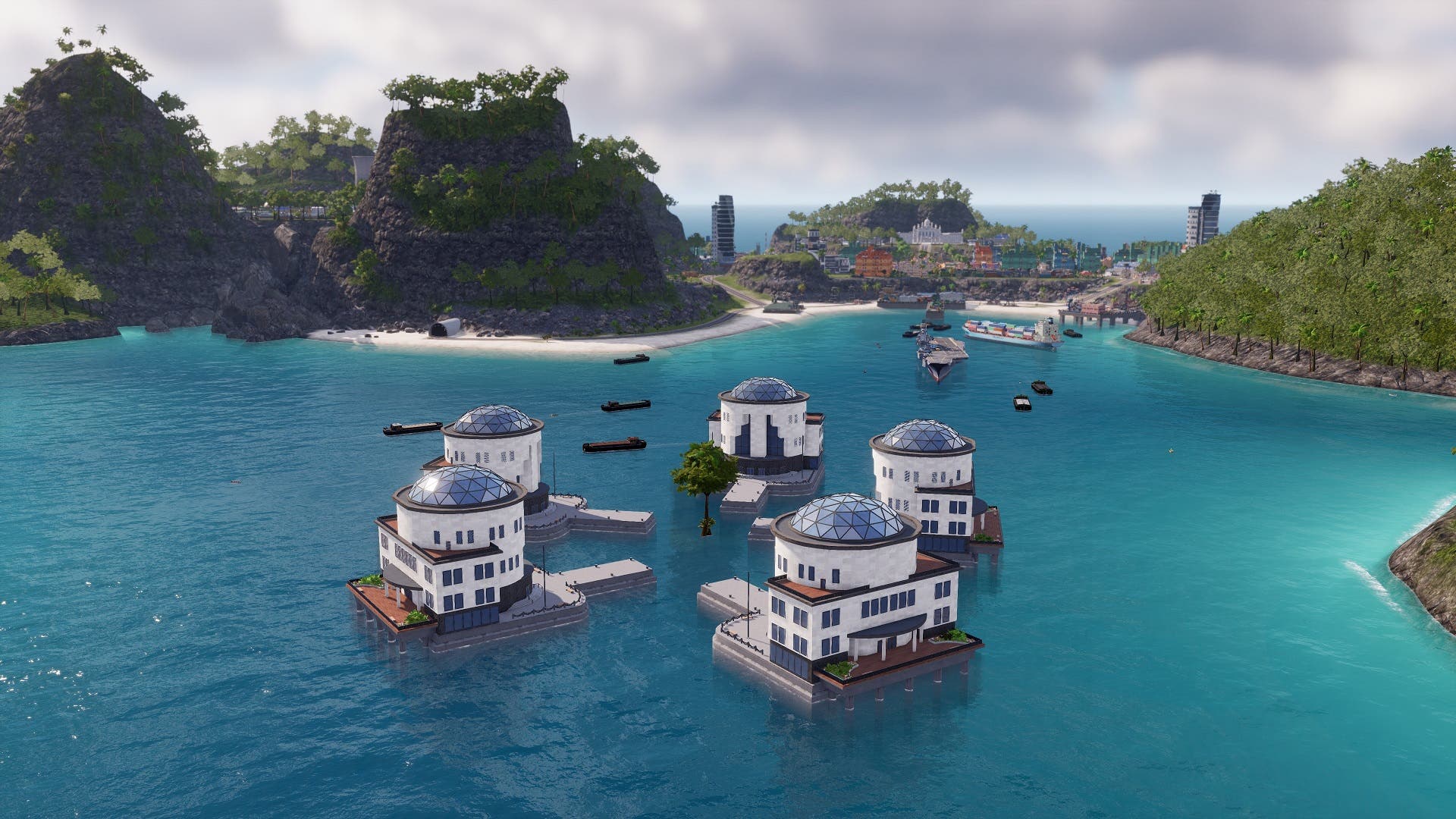 Missions make up the challenges for the game, with 15 in total providing scenarios to take on, each with a focus or a goal. By completing one, it unlocks a few more, offering a non-linear progression. Sandbox mode lets you be El Presidente without any goals or overt direction. It’s an ever-evolving map without structure, letting you be the best you can be, like an evil dictator or a loving pacifist. Both modes offer hours upon hours of things to do, but I found the missions to be more focused and grabbed my attention for longer.

As you play, you’ll be presented choices from different factions. What you do or don’t do, is up to you. But you’ll risk losing standing with them. Upon completion, you’ll be choose rewards like money or reputation that’ll help your short or long game. 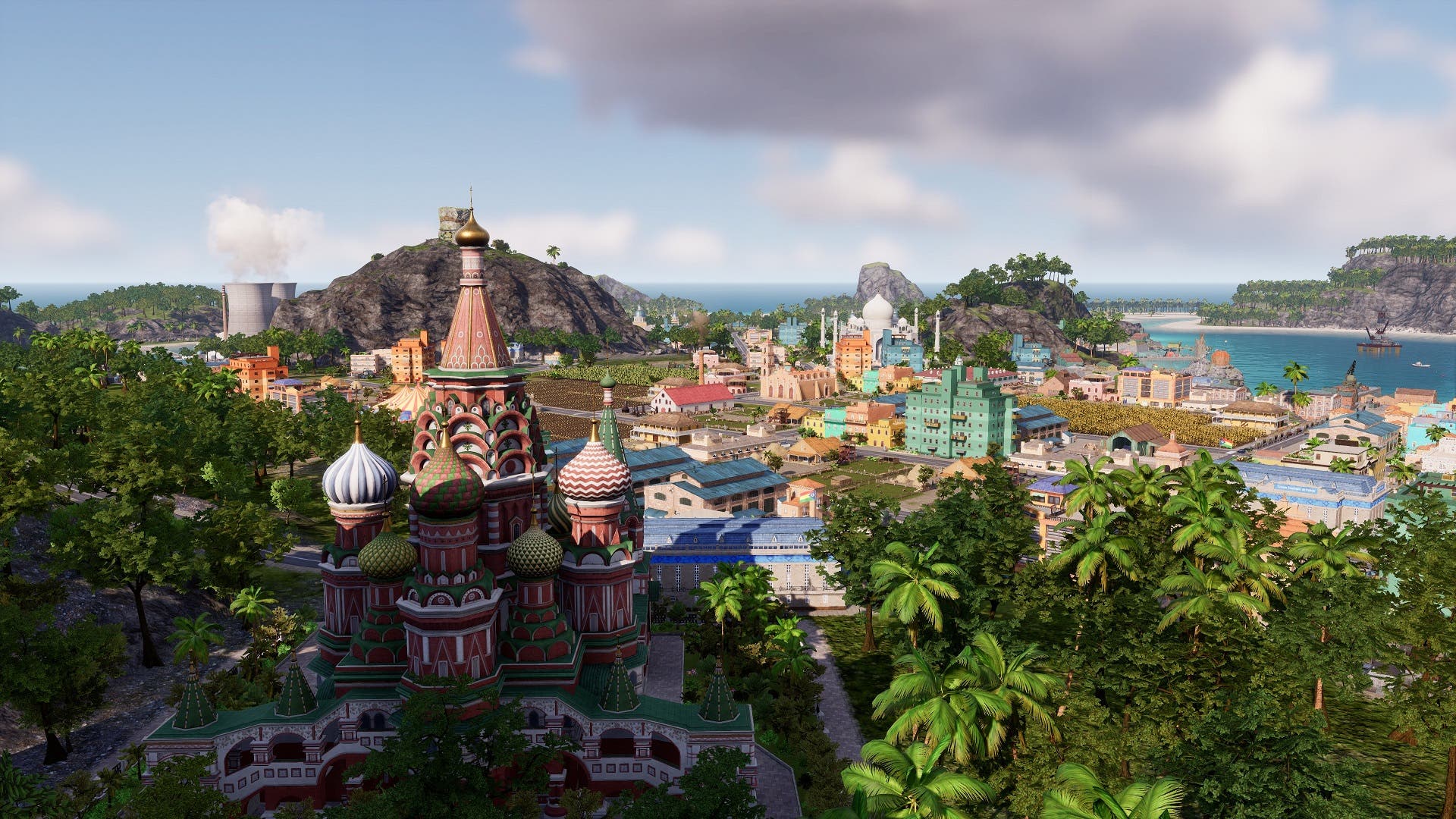 Along the way you’ll have issue edicts, which are rules in which there are no free lunches, or forced siestas. These can help or hurt your standing. You’ll have to ratify a constitution where you’ll choose things like the military is a priority or not. The element of choice is fantastic, but needs to be taken into consideration for your goals, either personal or the ones provided by the game. The tutorial is really helpful in teaching you just about everything you’ll do in the game, and what it doesn’t, the missions will fill in the gap. The loading screens give somewhat unhelpful, but interesting tidbits about leaders around the real-world. There’s a balancing act of pleasing political partners. You can execute espionage missions, bribe officials, and send out assassination orders to get the job done and get rid of rebels.

Quite possibly the funniest, and coolest thing you can do is steal the wonders from other countries. Once you buy and build a pirate cove, it opens you up to pirate activities. You can conduct raids send out your pirates to steal things like Stonehenge, the Statue of Liberty, or Hagia Sophia. In the Civilization series, it’s one thing to build it, but it’s so very Tropico to steal it. 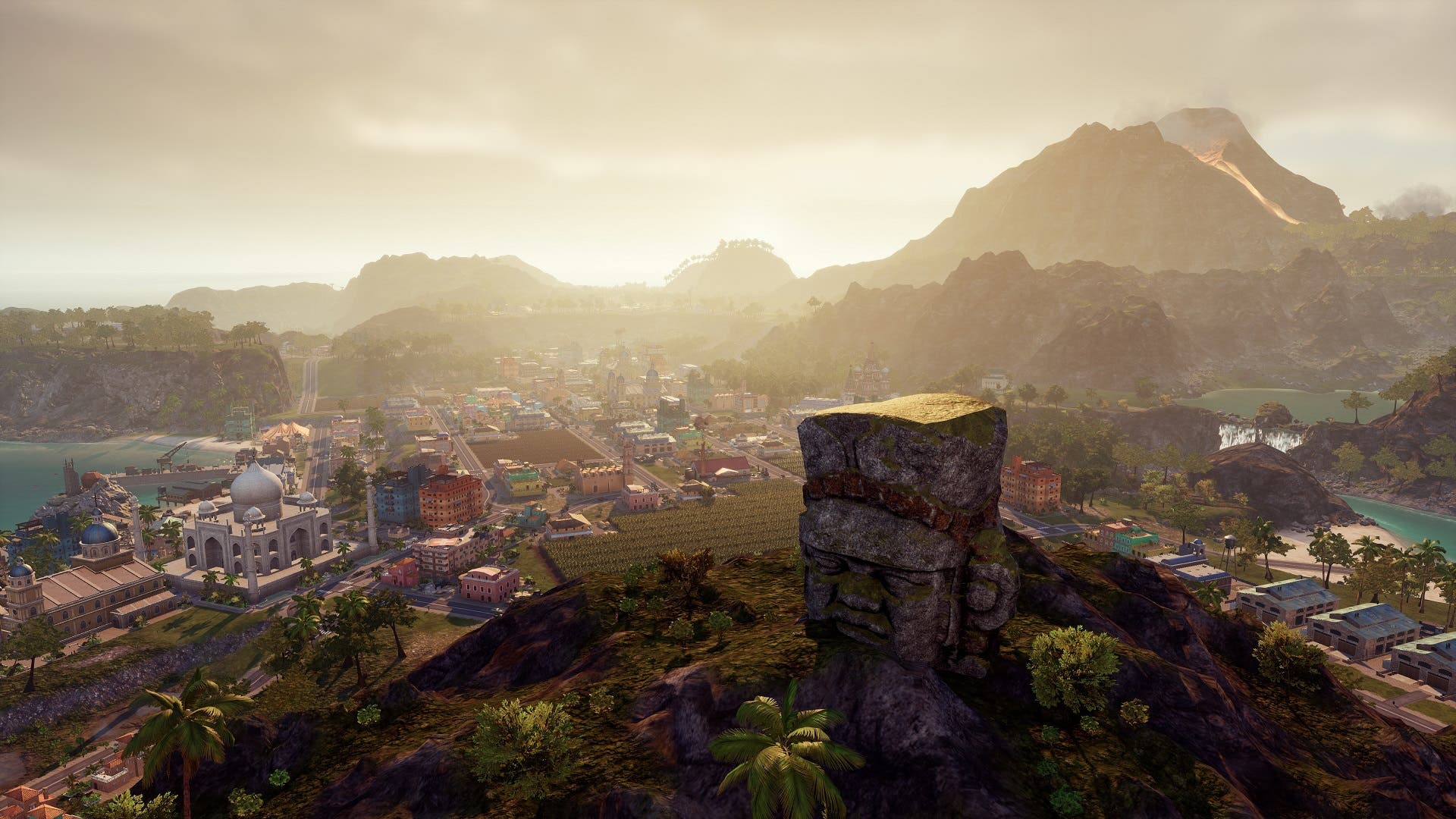 You can’t please everyone in Tropico 6, and you’ll have to make hard decisions. You can look at your political standing at any time, and see where you can make improvements. You have full politico freedom to do as you wish, but you’ll have to keep a watchful on your citizen’s happiness. This won’t always go hand-in-hand with your goals, so this is where the tough decisions come into play, and having to balance things. Sometimes you have to lose to win, and Tropico 6 always keeps you on edge.

I did run into a few bugs. The end of the tutorial had a lot of delays and unexpected issues in a raid not completing on time, which resulted in me running out of time for my mandate with The Crown. This was fixed in restarting that chapter of the tutorial. I’ve had constant issues with build orders. There were too many times where buildings that were set to high priority were not being completed in the order I had set. It didn’t disrupt things too much, but it felt it wasn’t working as intended. 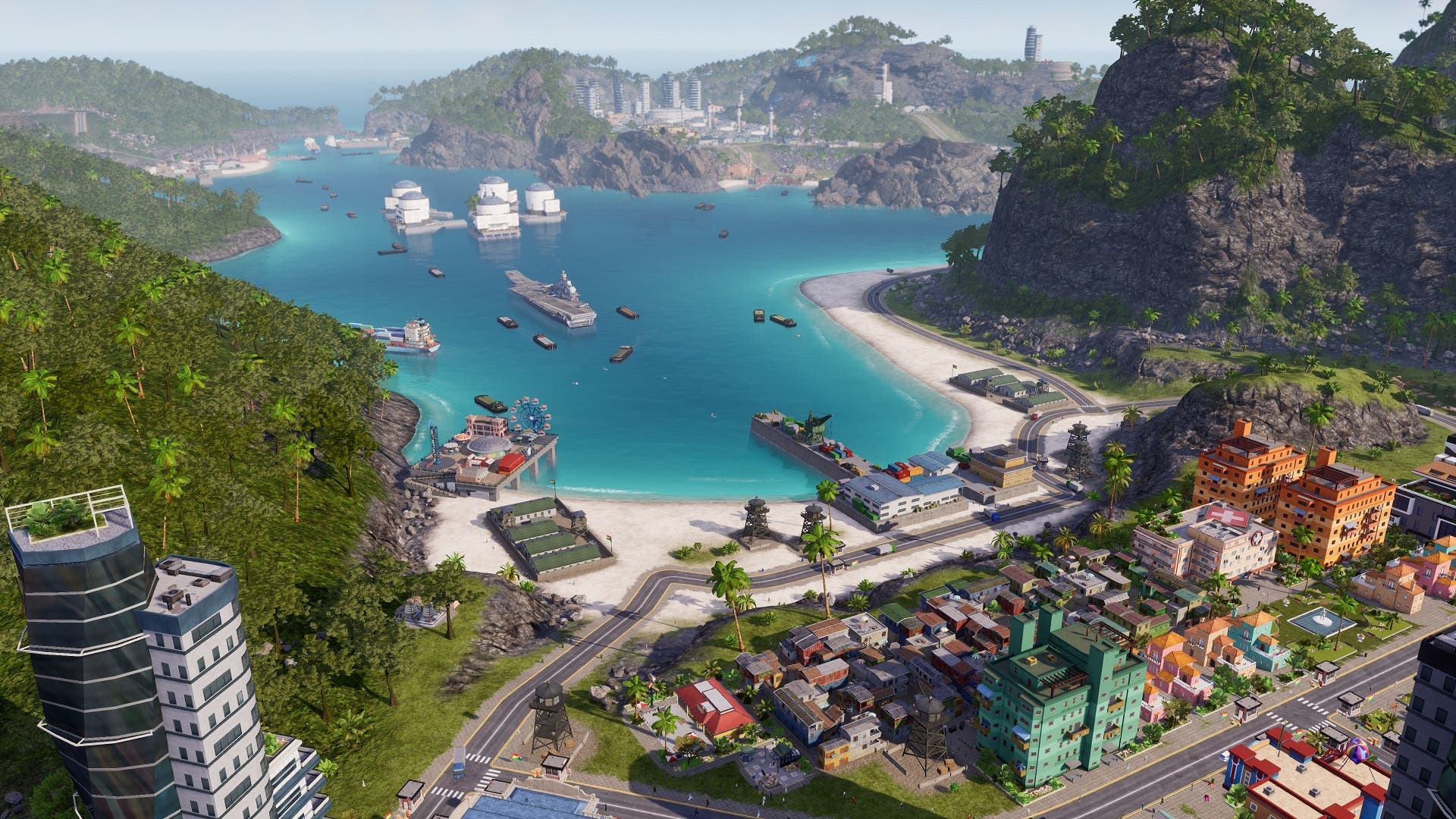 With the game running on Unreal Engine 4, the visuals get an overhaul and still manages to feel very Tropico. Since Tropico 6 was built from scratch, and even though it’s not as cartoony, it doesn’t lose that look that the game has maintained as technology improves. Newly included are these great heatmaps feature which provide colorful overlays for different things like happiness, pollution, and electricity to give you at a glance where things need to improve. When you are zoomed in, the game will render clouds and fog realistically, but when you’re fully zoomed out, all of that goes away for a clear view of the islands. This is simply the most beautiful, and best running Tropico yet.

While Tropico 6 can get very dark with bribes and assassinations, the music is constantly upbeat. It doesn’t ever get in your face, so it is the perfect ambiance to the things you’re doing. Each track is incredibly catchy, as well. So you just have the best background track for all that you’re doing, and it works so well.

Limbic Entertainment has breathed new life into Tropico that seemingly had offered all it could with the last entry. Tropico 6 eschews the things that didn’t work, keeps the things that did, and introduces tons of great new features. I enjoy how the way the new systems play off of one another, that landmasses change how traffic is shaped, the genius levels of pirating world wonders from their original locations, all adds up to a streamlined offering that lets the personality shine through. Tropico 6 doesn’t miss a beat with its latest entry, even with a new developer behind the series – in fact, it is the best of the series because of it.