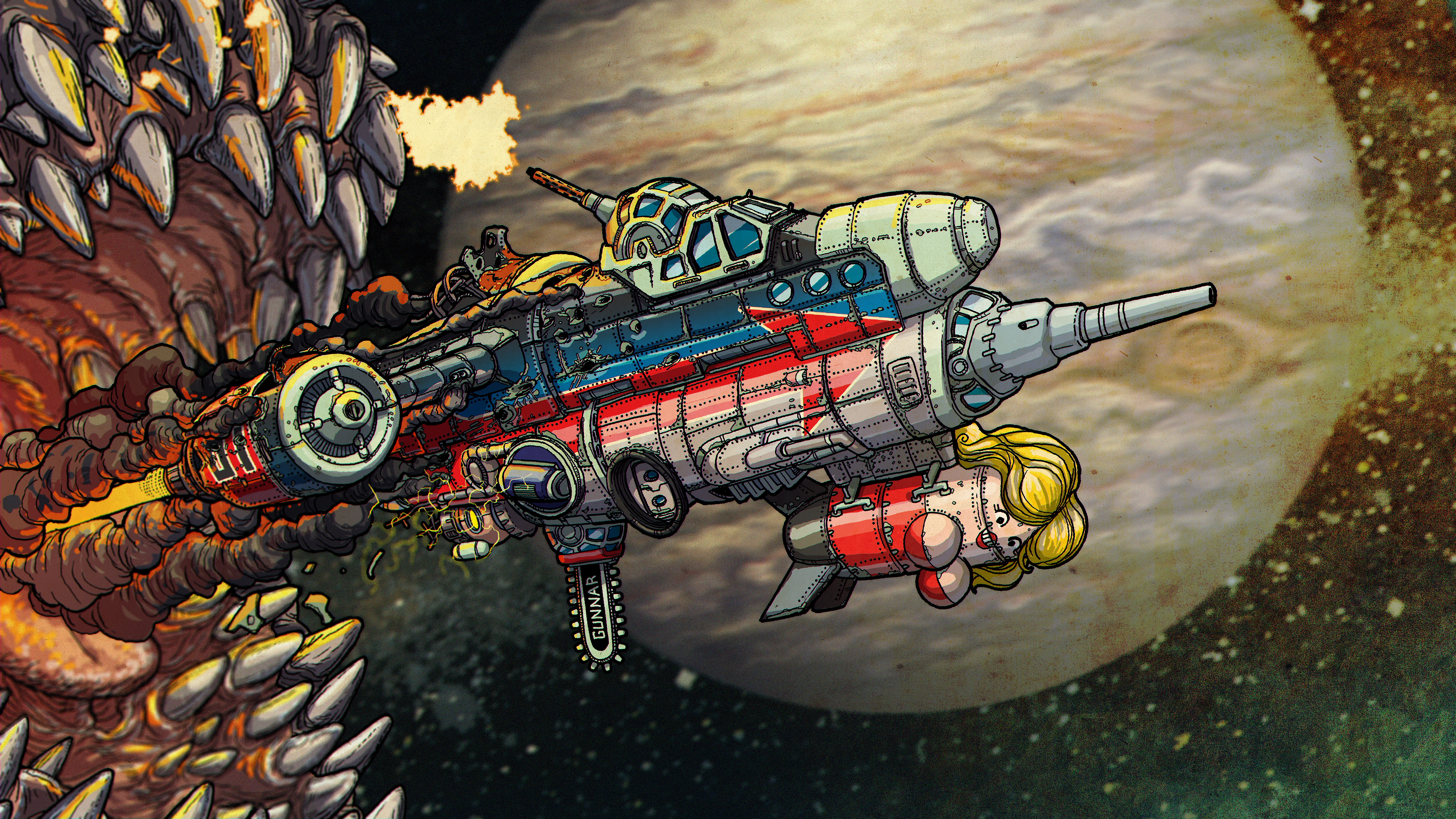 Fission Superstar X from Turbo Pelvis 3000 is roguelike in which you’re force into doing a bomb run, and literally everyone else is out to stop you from doing so. At times, it doesn’t know whether to be a roguelike or shmup, and it tries to be both to disappointing results. The game presents itself as being an impossible task, and in so many ways, is absolutely true. In time it grew on me, but it is hard to play in long stretches, and is better in short bursts. As a result, Fission Superstar X doesn’t come fully recommended, but there’s a lot of fun to be had with its absurd and beautiful worlds to see how far you can go.

Each run starts up by introducing you to the story, followed by a long launch sequence. I wish this intro could be skipped, or there was a “fast-start” option to quickly get back to a run. All the same, the journey from Planet X to Earth is arduous and lengthy, and it will kick your ass each and every time. Dr. Leopold is a mad scientist who pressures you into delivering mega bomb, but you have to get through our solar system first. Along the way you’ll be attacked by a seemingly endless number of baddies in many variations of ships sporting different kinds of weapons. I’m not sure what sort of leverage Dr. Leopold has on us, but it’s enough to keep doing his bidding, and clone yourself each and every time.

Starting a new game, you can either take on another crew member to man a specific gun, each with their own trade-offs. Or you can go it alone but get a beefier starting weapon that you can control. The starting game choices won’t have any short-term or long-term benefits, just a playstyle preference. Your starting crew, whether solo or an AI companion will only man one or two of four guns. Any guns you don’t have a place for are deemed blind spots. You will have a maximum crew size of four slots. From there you’ll have to protect the four quadrants of your ship, because should any of them take too much damage, it’s death for the entire ship and time to start over. This too is true of the enemies you fight, and if you put enough damage to their ships, the whole thing goes with it. Early on, the difficulty is off-putting and very discouraging, and the game does little else to make you want to keep going.

What makes Fission Superstar X stand out for games of this type is the manual aiming and movement. Like a shoot’em up, you’ll move from left to right and be able to maneuver your ship in any direction. But the the problems come when you realize there’s so little screen space to move around. What I can say in contrast to that, is that it helps build the feeling you’re a big clunky ship. With nine unlockable ships, you’ll soon reason there’s more nimble varieties out there you have yet to pilot. Even the first ship you unlock, you start to see there’s faster offerings to offset the slower pace of the game.

In combat, there’s a bit of multi-tasking and awareness that you have to take into consideration. The first thing is maintaining your energy bar. Energy is used when firing your main weapons, as well as using your shield. There’s no penalty to shooting all the time, but depleting your energy leaves you open to taking some serious damage you can’t afford in the later parts of the game. You can manually disable turrets to conserve power, and prevent unnecessary shots. It’s not something I ever mastered, but it does make a noticeable difference to energy consumption. 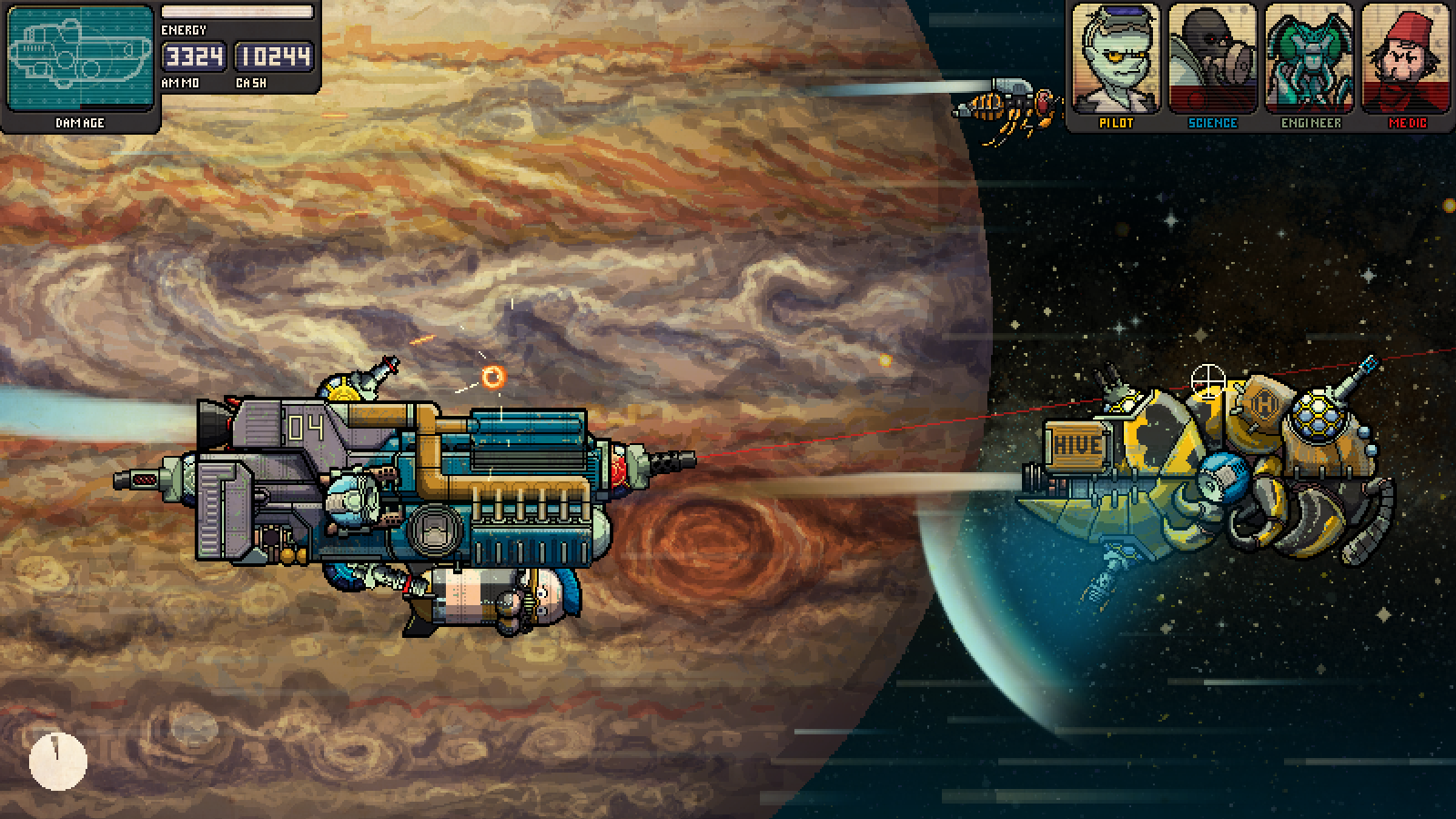 Kills net you money and ammo, and more of both if you can collect the random pieces that fly off of broken ships. Randomly health for your crew, armor for your ship, and energy can be collected as well, though it is rare. Since runs are time-based, after the one to three minute run is complete, you’ll come to a checkpoint where you can choose a place to go, such as recruit shipmates, shipyard, weapons, and special weapons. It’s also here where you can save and quit during a run – quitting by any other means is giving up a run.

These FTL-style jump points offer a respite to the onslaught the game regularly throws at you. Being able to upgrade your ships, recruit better shipmates that are better at their jobs, and even swap out the standard weapons for more powerful ones make a world of difference. As you advance further, there’s opportunities to buy skins for the bomb. For instance, on one run for each kill it would return health to my crew, offering a new angle on the risk-reward mechanics. 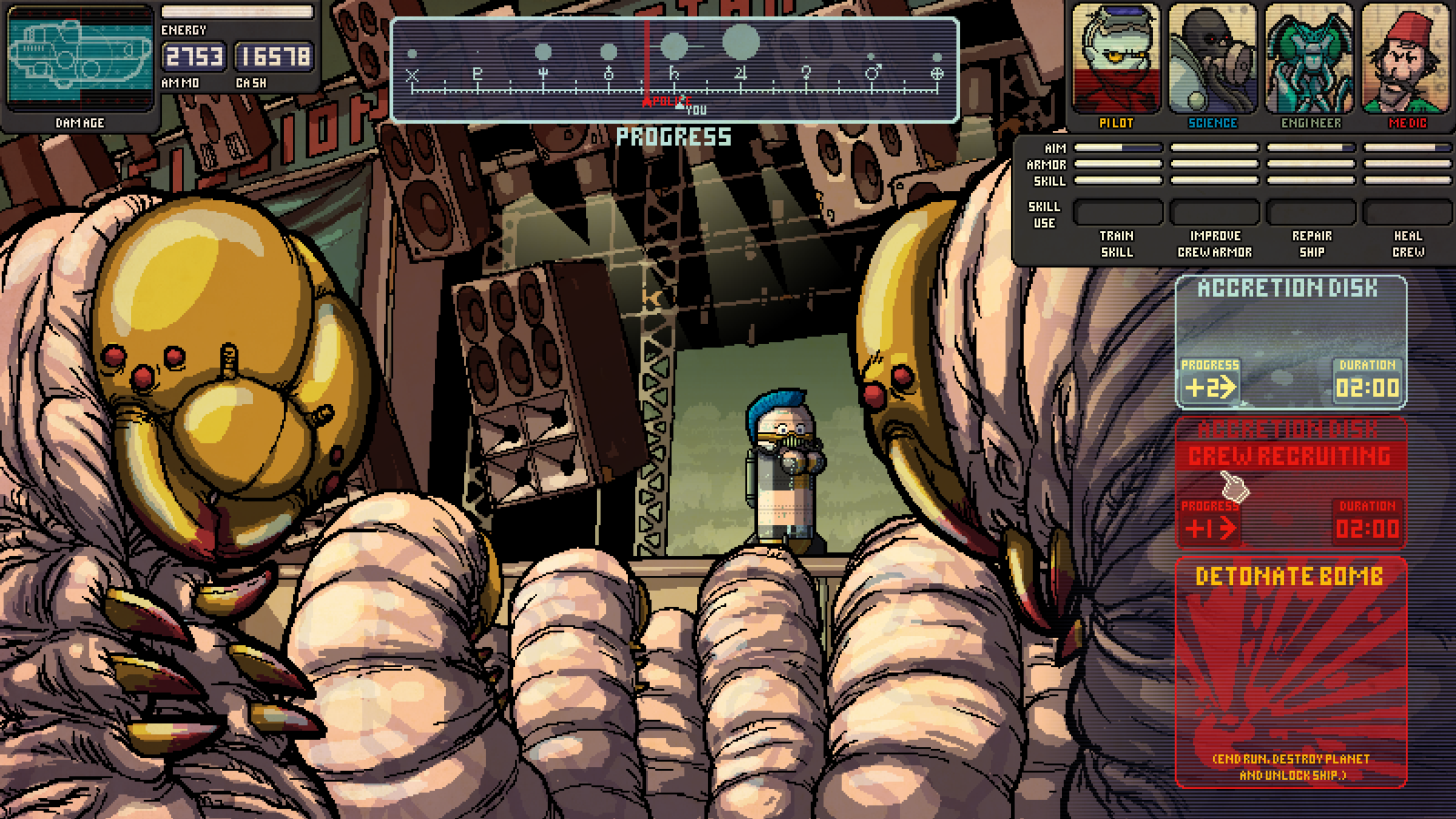 Since you are making a bomb run to eventually reach Earth, you’ll come across some planets (and even a former planet) along the way. After completing the planet level, you’ll have the option to detonate the bomb early, or continue your run. New ships are unlocked at planets, so it is worth it to go as far as you can. There’s some weird cosmic wake stuff happening in this game, in that there will be space wind, storms, and other inaccurate weather types that make for interesting gameplay.

There are often things not explained, and some bullshit randomness thanks to RNG. Dying and restarting in Fission Superstar X yields very little permanence. What does it offer? Well, there’s these DNA points which offer you a way to enhance your clone on the next run, but you get them so far and few between. They can be used to skill up Aim, Armor, and Skill which are the three attributes each character has that can be used throughout the journey. Using your DNA points to boost your crew’s attributes from the get-go has its advantages. And you keep your points for each run that can be redistributed as needed. 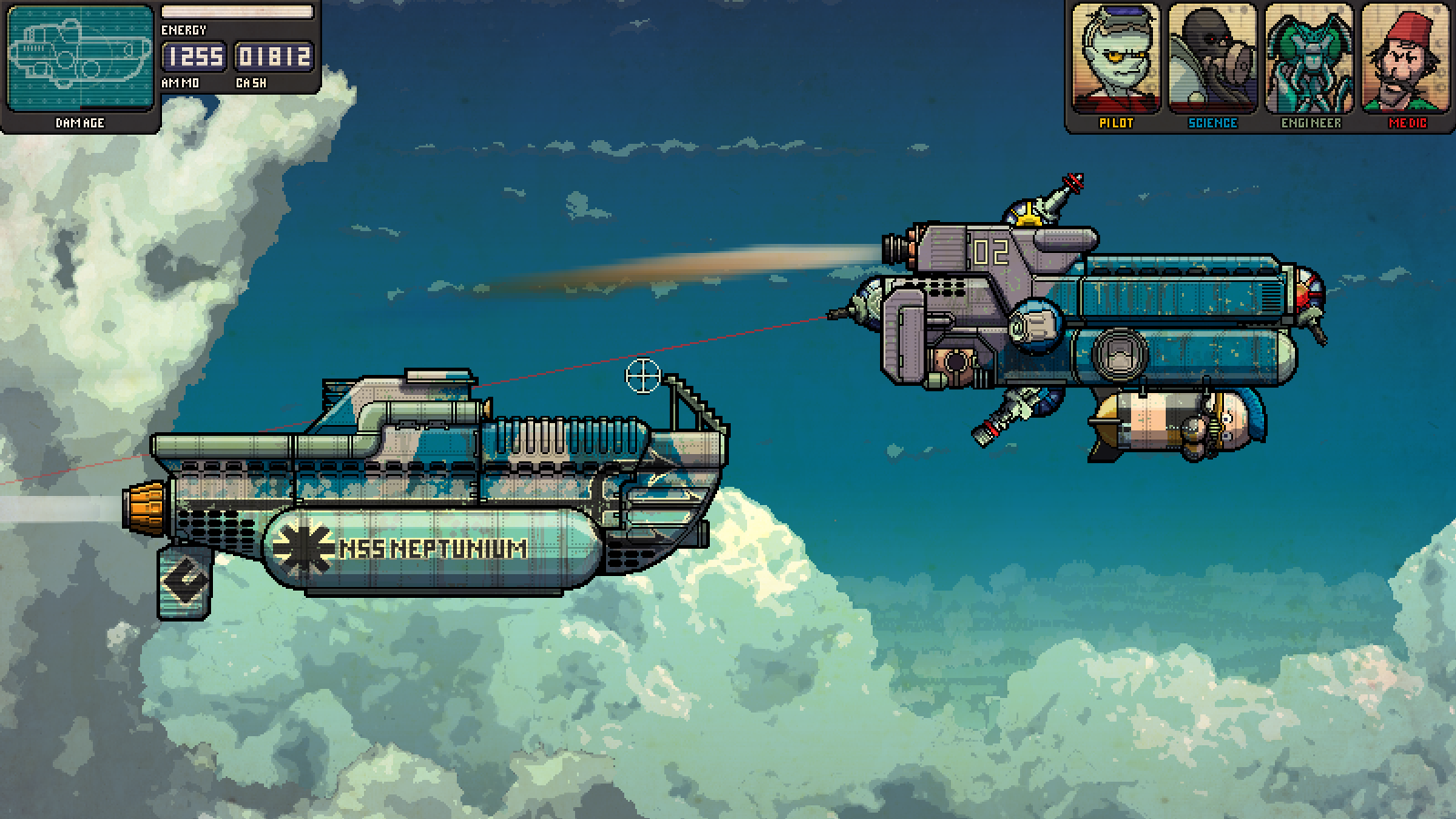 Fission Superstar X is extremely difficult, and the game is not afraid to prove it to you, time and time again. With so many cool things to do and see, it’s a shame it often tries to keep you from experiencing them. This had me on the fence the entire time playing it, and even in this moment I’m still there wondering why I keep coming back. I think a lot has to do with its personality in its art and quirkiness in the places you go. There’s a lot I like, but the constant push-back of the difficulty makes this tough to recommend. Fission Superstar X could use some work, but it’s still entertaining even for a few runs before you put it aside and come back to it another day.