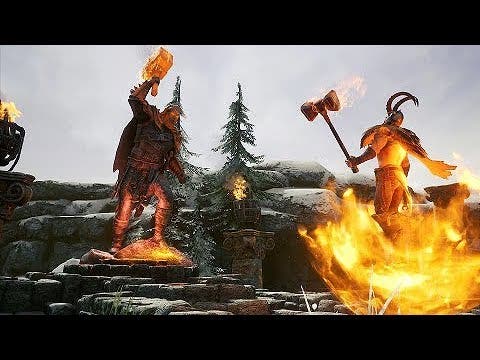 RUNE II (formerly Rune: Ragnarok) getting gameplay reveal on May 24th, with a release this Summer

MADISON, WI – May 22, 2019 – Prepare to tear an arm from your enemy and use it to kill Loki’s minions! Human Head Studios released a new gameplay trailer from its upcoming action RPG RUNE II. (formerly Rune: Ragnarok). The new video details Midgard’s brutal chaos, filled with a wide range of vicious beasts and monsters looming in the many ages of darkness! Chosen as Midgard’s savior, you will kneel atop the Divine Summit to receive a blessing and powerful abilities from the god of your choosing in the endeavor to end Ragnarok. It’s a race against time to prevent the conniving Loki from destroying Midgard as he keeps the world in a perpetual state of chaos.

RUNE II is finalizing development and will launch worldwide on Windows PC on the Epic Games store in Summer 2019.

For more details on the story, bad guys, quests, and other items players will discover in RUNE II, join Human Head at Twitch.tv/HumanHeadStudios on May 24 at 3PM CST/1PM PST for a livestream and Ask Us Anything event to see further reveals and chat with the developers. Have a burning question you want answered? Submit it in the official RUNE II Discord (Discord.gg/PlayRune) in the #may-ama channel.

“We’ve spent the last few years building a story-driven brutal Viking experience and evolving it with the help of our fan base,” said Human Head Studios Co-founder and CEO Chris Rhinehart. “Players return to Midgard with a sense of familiarity, but with new mechanics such as god-given abilities, open world events, crafting, a full single/co-op campaign, along with UE4 enhanced visuals, making it a true sequel to the original.”

Inspired by the original Rune (2000), RUNE II is set in a dangerous Norse universe during Ragnarok, the end of days, where beasts and the last remaining humans alike struggle to survive. You have been chosen by the gods to be Midgard’s savior – receive their blessings and powerful abilities as you endeavor to end Ragnarok!  Race against time to prevent the trickster Loki from destroying Midgard as he keeps the world in a perpetual state of chaos. Alone or with friends, you will battle legions of Loki’s minions in brutal melee combat, travel the world collecting rare resources, locate precious artifacts to weaken the Realm Gate and craft the mightiest weapons the Nine Realms have ever seen. Are you powerful enough to take down Loki…or will a new age of darkness begin?

Development of Rune II is being funded by ESDF Management, a video game production and finance company.