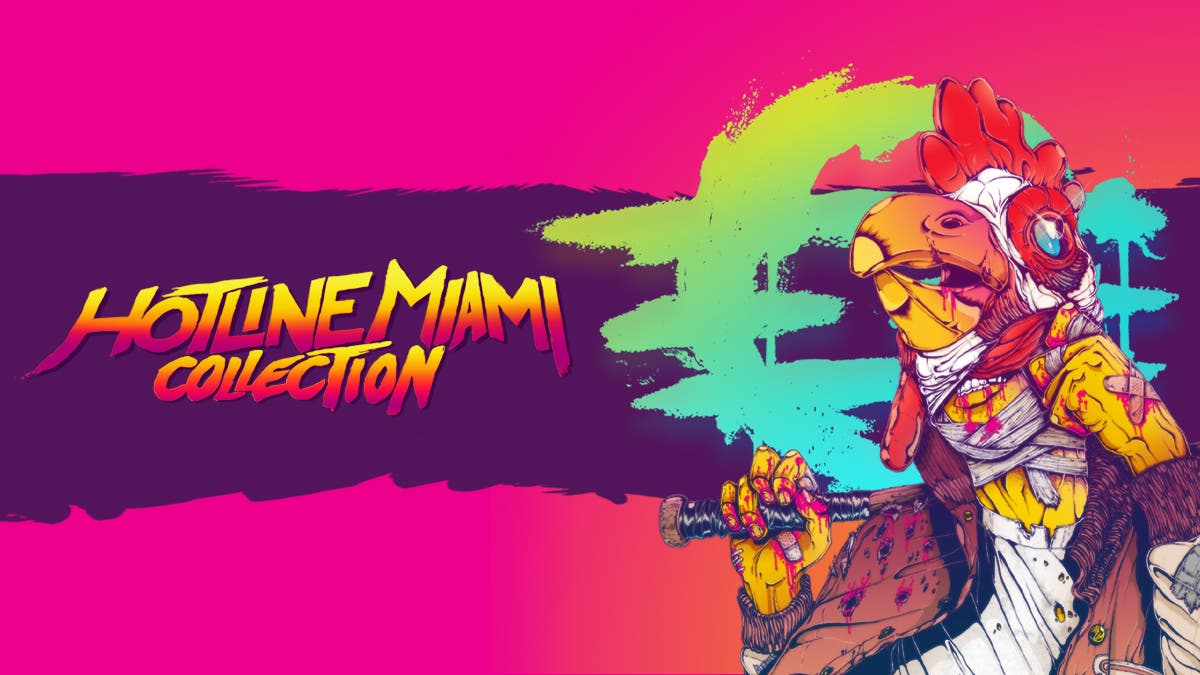 When Hotline Miami‘s title screen first appears, it doesn’t simply fade in or precede itself with loud, energetic fanfare. It drenches you with bright neon and deep synth, slowly seeping into your brain until it feels utterly saturated by a vibrant but foreboding sea of color and sound. As the Cyrillic title text gently floats back and forth against a sun-soaked urban skyscape, you experience a sense of being adrift in kind with it, disoriented by a new locale full of promise and mystery. Whatever lies beyond the “New Game” option is going to be unlike anything you have experienced in another game. 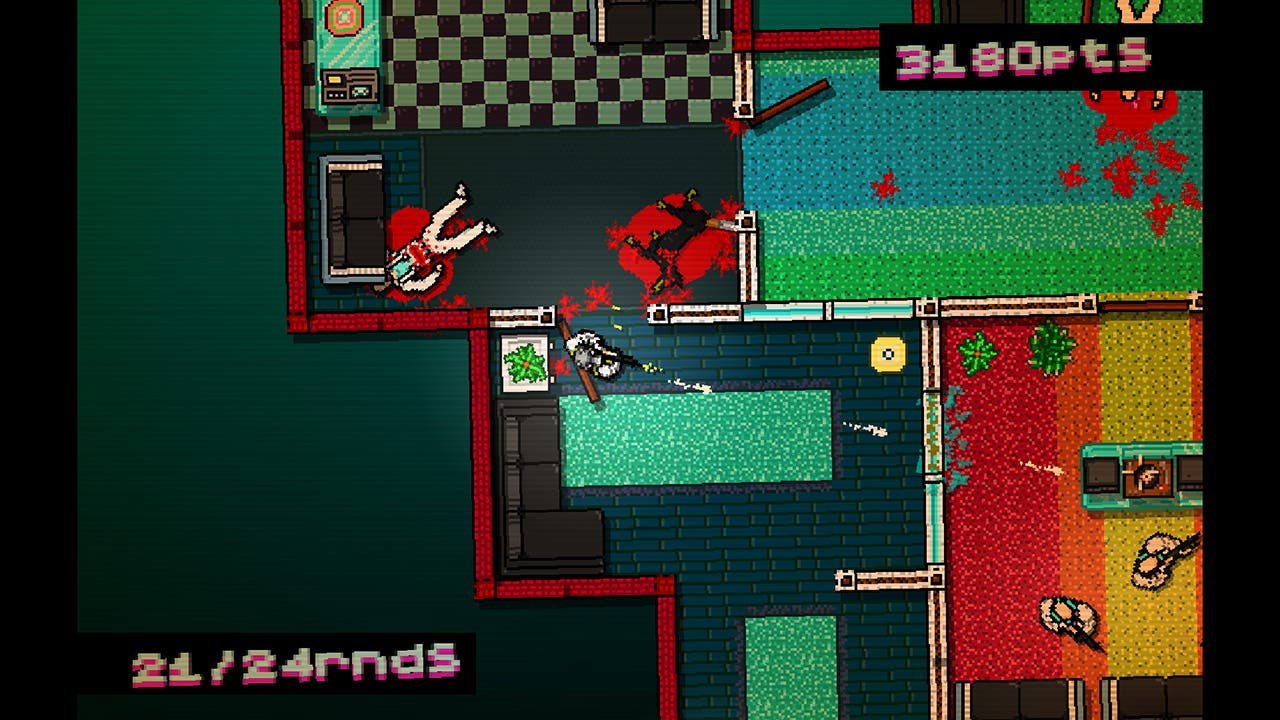 Seven years on from its original release, Hotline Miami still cuts a striking first impression, and as always, the ride that begins once you press Start is a jarring and difficult one that keeps you thinking about it well after you’ve put down the controller, for better or worse. There’s a lot to love about this game; it is absolutely dripping with style in terms of its presentation. The way text animates (and undulates) on the mission start and completion screens, the ample use of parallax scrolling on their backgrounds, the vibrant and sometimes psychedelic color palettes, and the high attention paid to small details throughout all keep you reeling in a fever dream of 80s fauxstalgia that teeters on retrowave but maintains its own very unique identity. The game’s soundtrack thumps and grooves and builds a real mood within you, so much so that you may find yourself jamming to the tracks well after you set down your controller. You want to throw on a pair of dark sunglasses as you bask in the heat this thing brings.

Yet, eerie and sinister undertones are intermixed early and often. Character portraits are unsettlingly stylized but also uncannily lifelike despite their pixellated nature; these are “real-looking” humans and not your typical, pretty-faced idealized characters. Their physical flaws are immediately visible, spotlighted even. The world in the game is dingy and unkempt, with locales like cheap apartments and pizza joints and meth clinics that you visit all in the first thirty minutes, cementing you squarely in the seedy underbelly of the city. Levels and locations hang out against pulsating gradients, removing them from any sort of familiar context you can grab onto. Most of the songs are real bangers, but you begin to notice many of them are moody and tense, and cutscenes use discordant symphonies of weird instruments to strip away any sense of grounding you may have still clung to. And then, there are those guys in that dump of a house wearing their creepy animal masks who greet you at the outset, and let’s be real; you’re going to take orders from them because you’re pretty sure that if you don’t, it’s going to end badly for you. 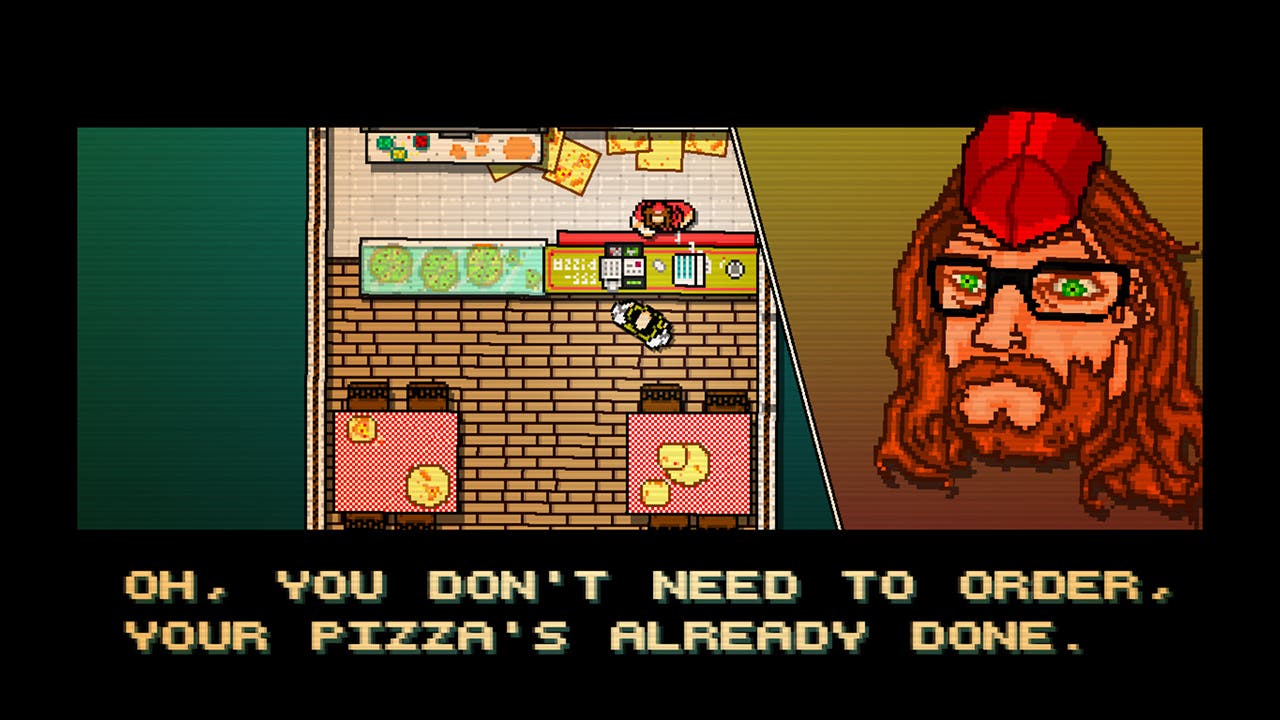 What they want from you is fairly straightforward; violence and killing. Lots of it. They don’t explain the “why” of anything to you at first; you just get your assignments as cheeky coded messages on your tape-driven answering machine (dry cleaning that needs to be picked up, a package needs delivering, etc.), and you carry them out because that’s your only option. Right away, the game teaches you how to be an effective murder machine. It lays out all of the techniques at your disposal, strongly encourages you to use every one of them, and now you’re equipped with all of the knowledge you need to carry out brutal rampages in service of forces you don’t really understand.

Each level of the game is one of these “missions.” You show up at a location, put on a mask of your own (which may or may not grant specific advantages), and set about your dirty work from a top-down view, taking stock of the enemies that lie ahead and doing your best to plan how you’re going to take each of them out using only what’s available in front of you. Many levels start off with you having to rush a melee-equipped foe to disarm him and take his weapon; sometimes you get space to breathe right away, others you have to immediately pivot to another enemy who’s rushing you with a lead pipe to keep yourself from getting splattered. You can stun enemies by throwing things at them, kicking doors into their faces, or just giving them a good old fashioned sucker punch. There are a variety of weapons you can steal and use against your targets, but they are just as quick and as good of shots as you are, sometimes better, and with excellent reaction times. 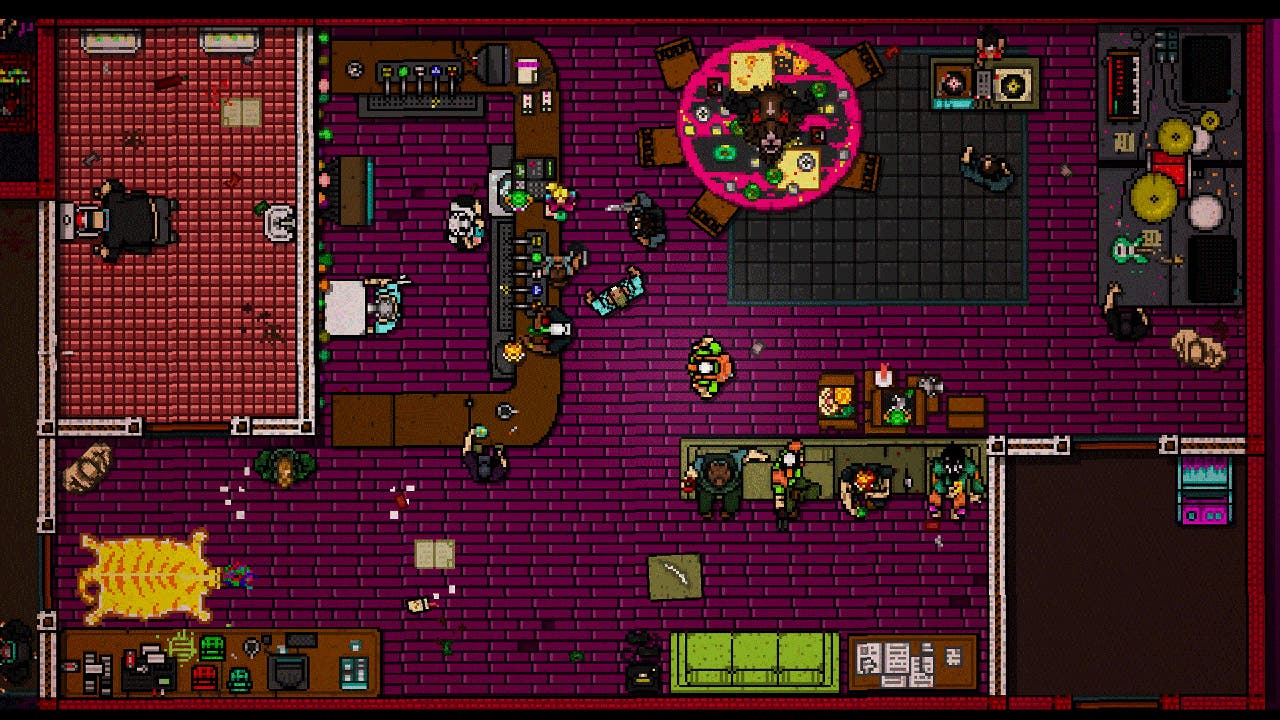 If it isn’t clear by now, I’ll state the obvious: this is no walk in the park. Hotline Miami is hard as hell, and every level is a puzzle of ultra violence that you have to solve. You’ll die repeatedly trying to work things out, but this isn’t a game about avoiding death. Every time you successfully work your way through a level, you feel a sense of triumph; then you have to run back through the rooms full of bodies you’ve left in your wake to get back to your car and escape. The feeling of satisfaction is fleeting, and always further cut short by the next level you jump into, where the difficulty has already stepped up from the last, and you will often feel as though you’re back at square one.

The game’s controls are well tuned, which is essential for any moderately-paced shooter with highly aggressive enemies. Movement is fast and aiming feels very precise, so you run and shoot more or less exactly where you intend to. You can lock onto enemies and cycle through them quickly to help reduce the number of split second decisions you need to make. That convenience cuts both ways though, as you can easily find yourself locked onto the wrong baddie and suddenly eating your intended target’s rounds for lunch. 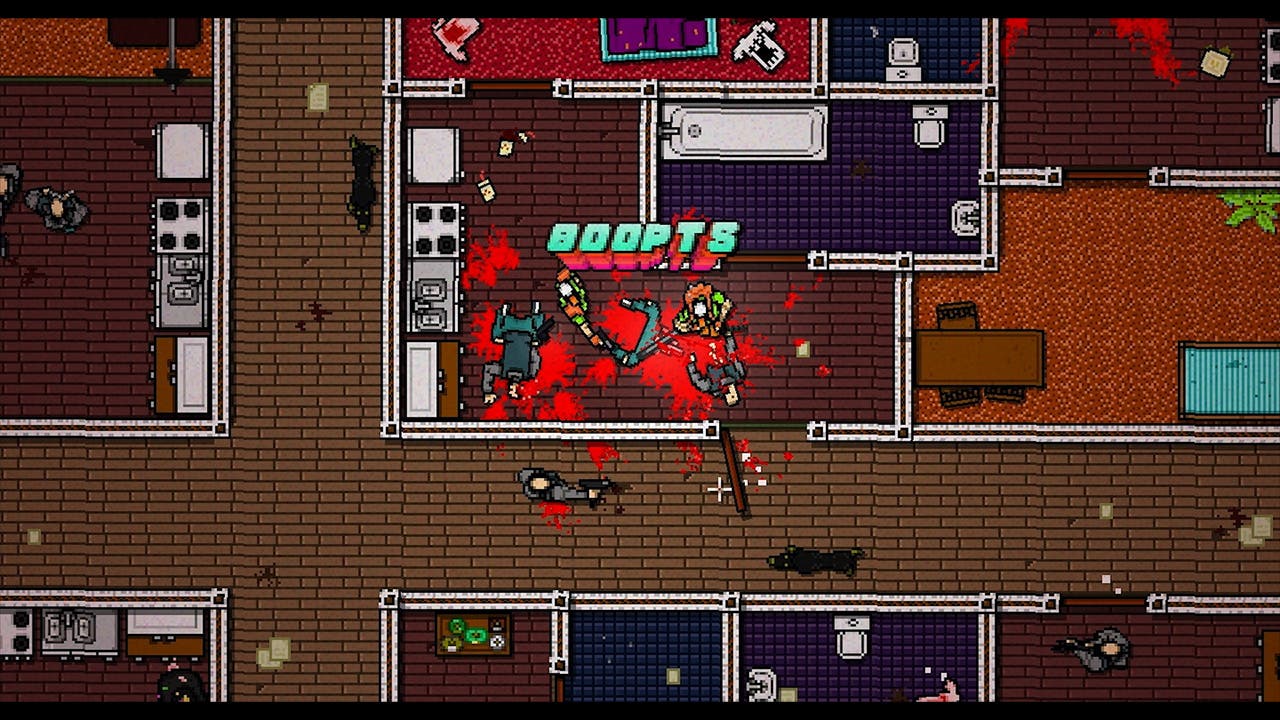 Success in Hotline Miami boils down to good planning, precise execution, quick reactions, and bashing your head against the wall as many times as it takes to get all of those elements working at the same time. Most of the time, though, you’ll screw up, and you’ll restart, and you’ll screw up again and again. Eventually you’ll figure out how to work things to your advantage well enough to win, and when you do the music abruptly drops out with a record scratch. The trance is broken, and you’re confronted yet again with the horrific mess you’ve made.

Hotline Miami isn’t exactly subtle about rubbing your face in your own acts of brutality. It gives you ample opportunities to reflect on the carnage you’ve caused, and it wants you to feel really gross about it. Your character vomits in revulsion early on in the first encounter. Your monstrous acts are not normalized so much as intensified and regularly spotlighted in service of making sure you don’t forget that while you’re in your groove, you’re losing your humanity. Or at least, that’s certainly the intent. I’m not actually sure how effective this display of extreme violence as a critique of video games or pop culture in general is, especially in the world as it is today. 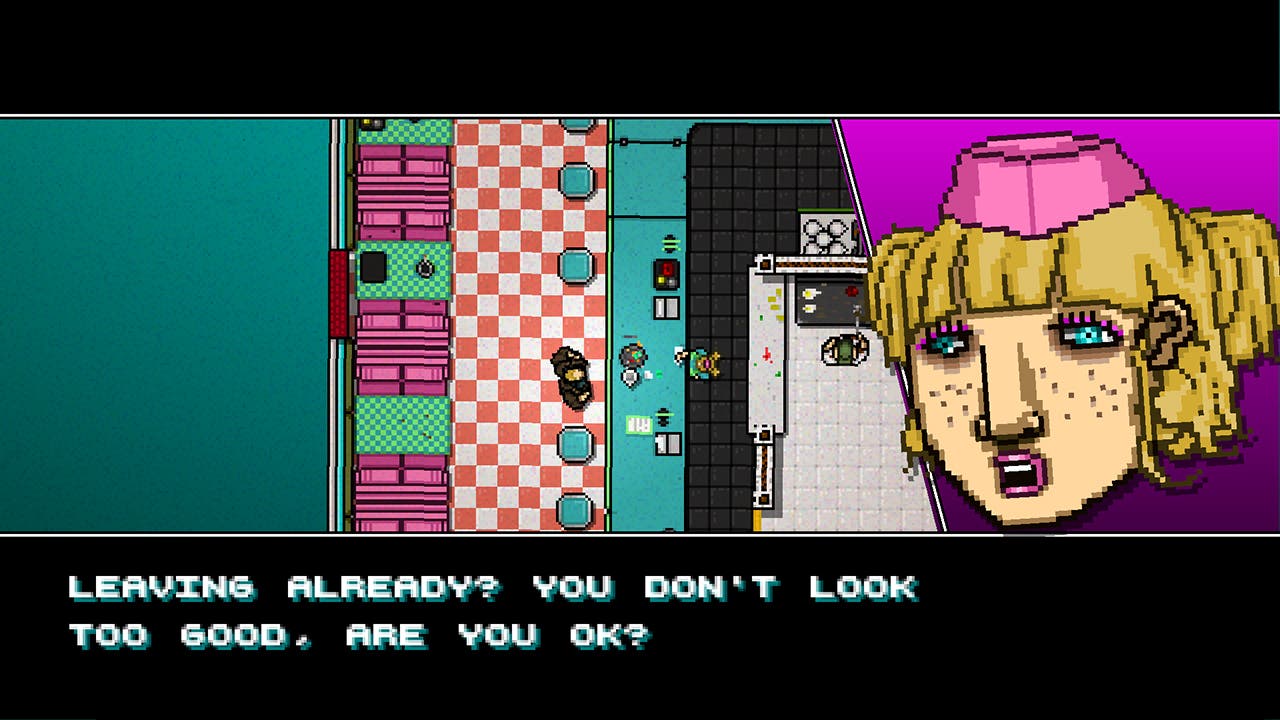 I know this; seven years ago, I found the violence in the game disturbing but something I could ignore, focusing instead on the challenge at hand. It was easy to let all of the stylish trappings of the world supersede the acts I was carrying out and dismiss them as a less important aspect of the package. Today, it’s really difficult for me to see anything else but the violence. I have a hard time concentrating on the puzzle-like nature of the levels, and all of the exposition and set dressing of the game world between missions feel like distractions that intentionally subvert themselves to make me feel even weirder about what I’m doing. The game clearly hasn’t changed, but I have, and so have my perspectives, so either I’m more attuned to what Hotline Miami was trying to do all along, or I have become more sensitive to it’s content. Either way, I’m significantly less comfortable with it.

As for Hotline Miami 2: Wrong Number, it’s also the same game that came out a few years ago. Stylistically, it builds on the previous entry but updates some of the aesthetics to match its early 1990’s setting, and while the changes are subtle, they are effective. Mechanically though, it’s identical to the first, and the story builds on that of the original. There are some small quality of life improvements in Hotline Miami 2, but the game was very specifically designed to look, play, and feel as much like the original as possible. It feels more like an expansion pack or DLC campaign in a lot of ways, which I say as a compliment rather than a drag. It feels right at home alongside its predecessor, like the natural continuation of an already strong formula. I don’t know if it’s quite as “successful” or fresh as the original, and it feels even harder to me than the first, but it could just be that I’m rusty, and tired. 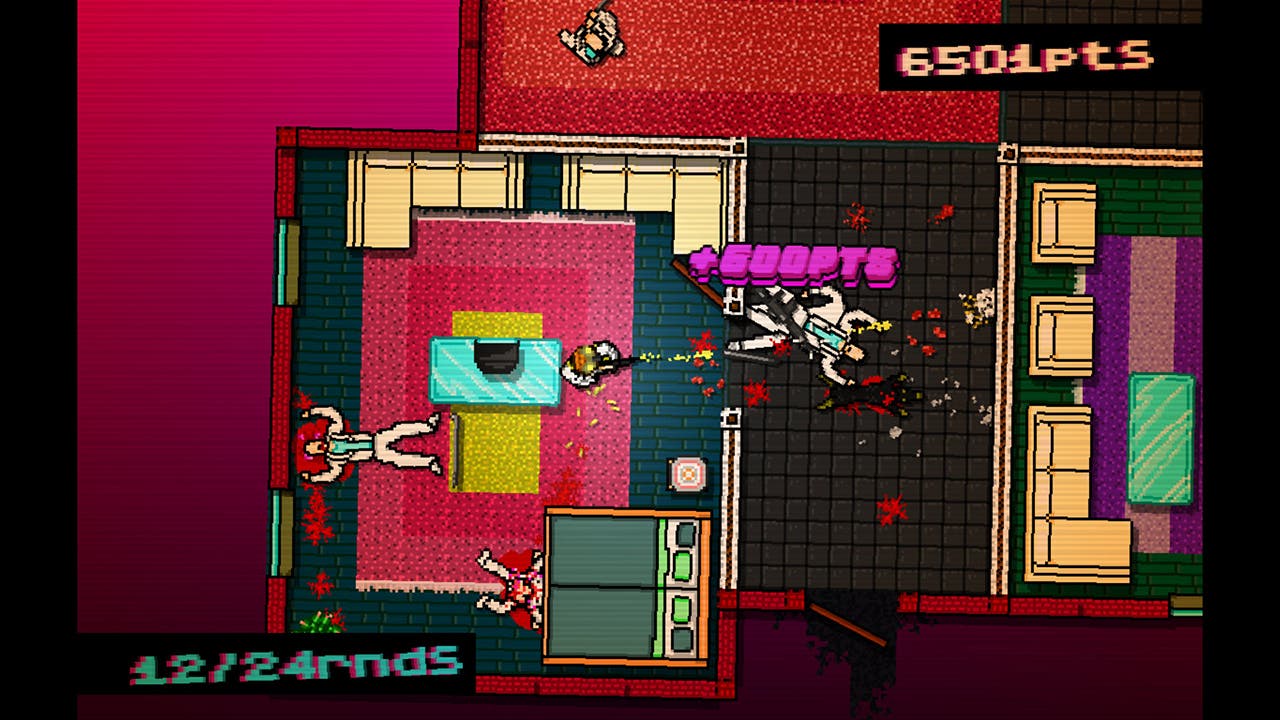 It’s a strange thing to be able to return to both Hotline Miami games on the Switch, of all systems. Nintendo’s colorful handheld isn’t exactly the system that comes to mind when you think of grimy game worlds and graphic violence. On the plus side, these are extremely faithful conversions that run perfectly on Switch and bring another classic franchise to its ever-expanding library of indies. This package isn’t for everybody; it’s hard as hell and is over the top with its violence, but there’s no denying the importance of Hotline Miami as a touchstone within gaming culture. If the Switch is a platform for collecting as many games from as many generations as possible, Hotline Miami and its sequel feel like essential additions to its catalog.