Harrowing. That’s how I’d describe Lonely Mountains: Downhill. Never before have I played a game quite like it. Sure, Trials HD has some element of this, but it’s not the same. Downhill Domination on PlayStation 2 kind of went for this feeling, but it’s been a long time since that game. The pure brilliance of Lonely Mountains: Downhill‘s minimalist yet detailed art style and sound design combined with excellent controls make it an absolute gem. 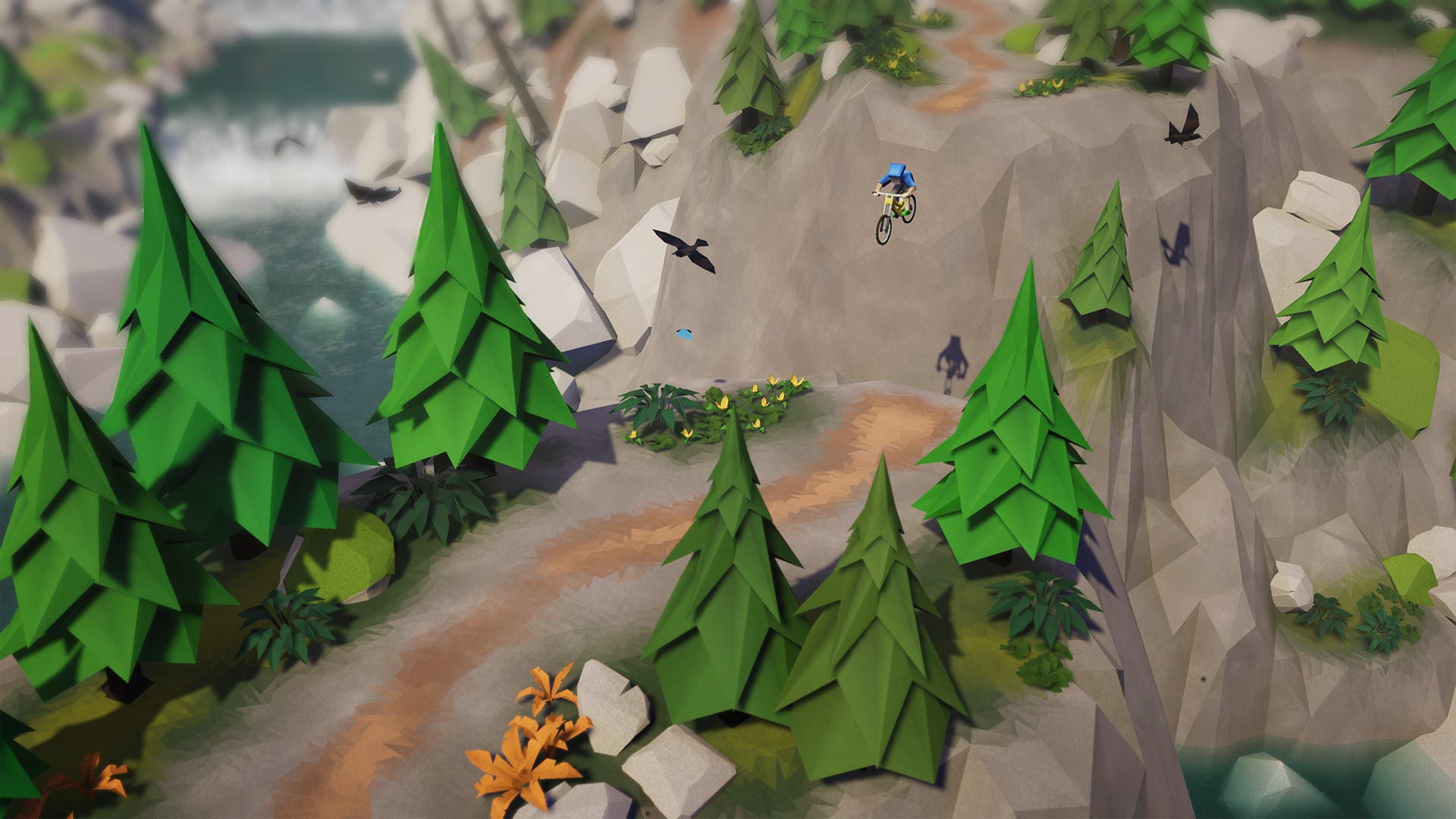 There are four mountains to conquer in Lonely Mountains: Downhill, with four trails per mountain, and four sets of challenges per trail with corresponding difficulties. There’s new trails and mountains that open up without too stringent of a requirement to progress, so you never feel stuck trying to beat the impossible just to get to something new, save for maybe the bike progression. Getting a good time is a balance of speed vs finesse. As you play and complete more challenges, the hardest of difficulties is unlocked, which is a night version of every trail, where you only illuminate what’s in front of you based on where your front wheel is facing, and it’s absolutely terrifying as it sounds.

Thankfully, the rest of the game is just an absolute joy to look at, from green forests to the desserts of the Sierra Riviera with the heat wash effects. The game has so much detail, yet looks like it’s made out of papercraft and painted in watercolors. It’s vibrant and you can almost smell the nature. The game embraces the loneliness by not having any kind of music. Sound takes center stage as all you’ll hear is the bike’s tires, gears, and chain as you jump, drift, and cycle. Every sound is crisp and echo across the surface of the trail. The soundscape is an important and impactful element of the game.

The game features blood when you crash or otherwise wipeout, and can be toggled off for younger players. This is a game that eases you in, but provides plenty of challenge. I think that it might be too hard for a child, but it’s mostly a game anyone can pick-up and play and enjoy.

In order to complete the later challenges or get a good time, you’ll have to make use of the game’s branching paths. The general path is wide and safer, and anything you see that’s narrower will definitely be quicker. Lonely Mountains: Downhill does a great job at veiling the alternative paths. It won’t take you long to notice the discoloration in areas that lead to shortcuts, which are everywhere. It’s about memorization in order to accomplish these tasks. The camera follows, zooms, pans, and pulls away all at the right times. It keeps the tension up without feeling restrictive. There are some blind jumps and corners, and when you see them for the first time or even the second, panic sets in. This is a game where you’re separated from the viewpoint of the rider, yet you feel so connected.

The trails are played in increasing difficulty. First you’ll explore the trail as if it’s a qualifying lap for a racer, then you unlock challenges like completing in a set time or without a certain number of crashes. If you complete those, it continues to build as you discover new shortcuts to meet the tighter time requirements. It’s rewarding to complete multiple challenges in a single attempt, but those will be few and far between. You’ll learn to accept the little victories, and this game more for it. This is not an easy game, but there are checkpoints. The checkpoints lock-in your time up until that point. So if you crash or take a bad path, you won’t be adding to your total time. Once you reach the end, it’s your campsite and you can rest. 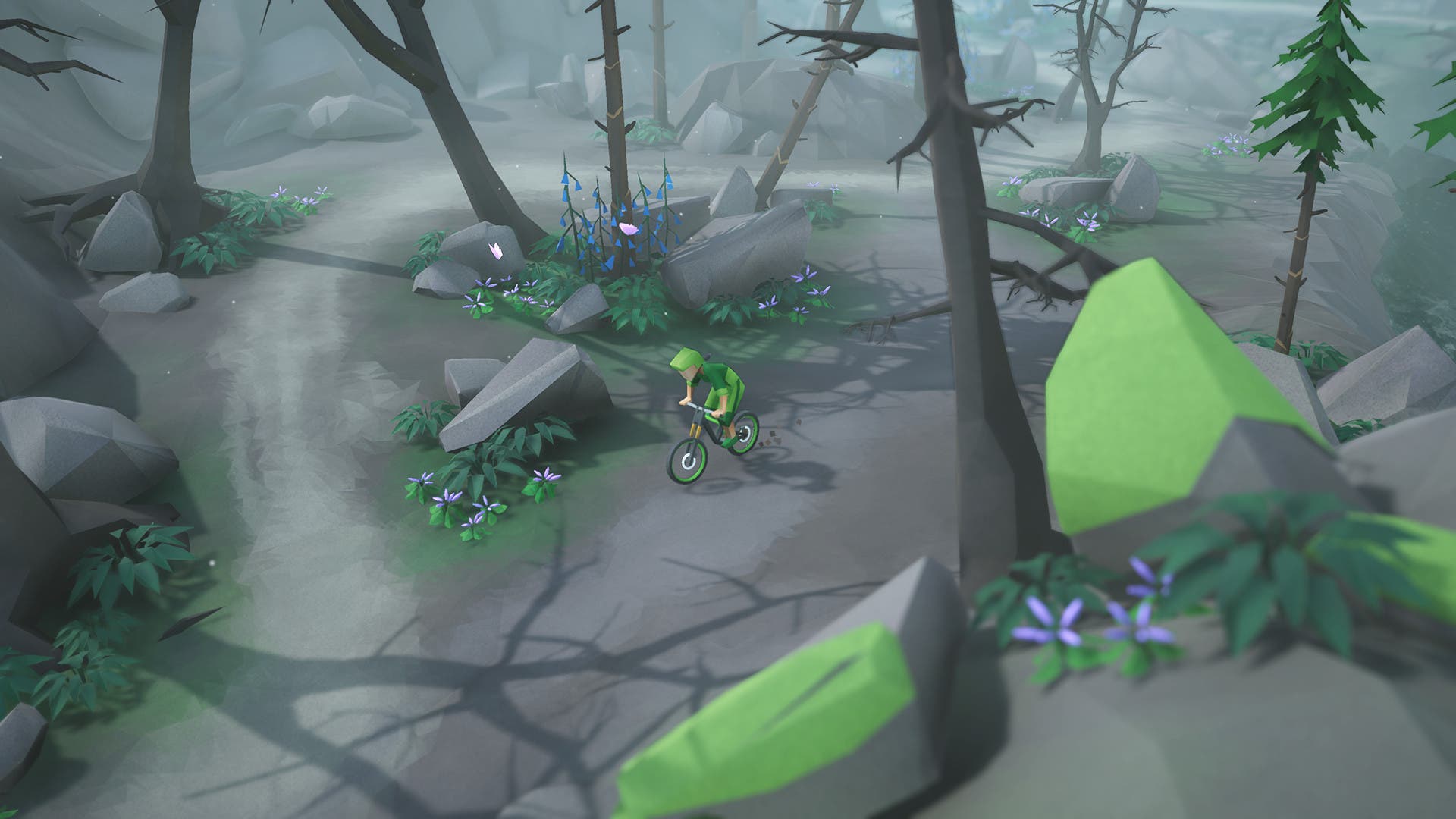 I wrestled with the controls early on. The game features two methods on controller: eight way or left/right. I opted for the eight-way, but it never felt good or intuitive. Once I switched to the left/right system, it was what I used throughout the game, and something I absolutely recommend even if it wasn’t the first method presented. The controls themselves are simple: pedal, brake, boost, and turn. The boost is a limited, stamina-based charge that lets you clear gaps or get a little bit of time back if slowed down through a tough area.

As I mentioned before, unlocking bikes is a bit of a slog. And I get why, but it could be expedited by just a little bit. You unlock separate bike parts by completing specific challenges, usually at the higher difficulties. There are bikes that offer more speed or more resistance to drops. You can return to older mountains and trails when you’ve unlocked a new bike that’s better equipped stats-wise to handle those trails. And subsequently you are a better cyclist as well. 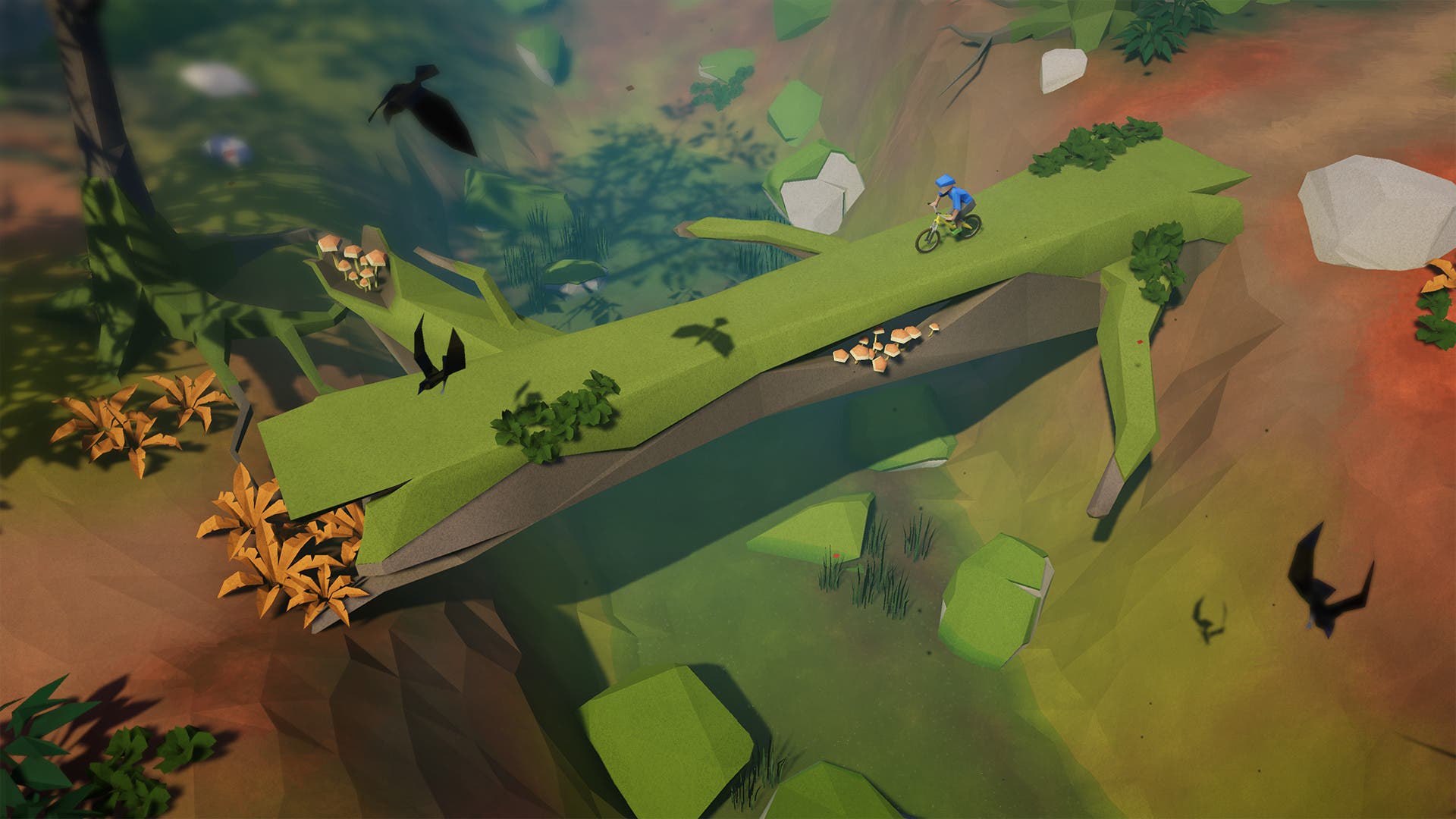 The game does feature customizations for the rider and the bike. The rider has individual components and outfits that can be worn. The bike is limited in a similar fashion, but there’s a lot to unlock through playing the game, so it might be a while before there’s a style or look that’s to your preference.

Lonely Mountains: Downhill does have collectibles in form of Kickstarter backers to be found in obtuse places. You should also be on the lookout to find serene areas to kick back, and take in a view. It’s not all heart-pumping action. 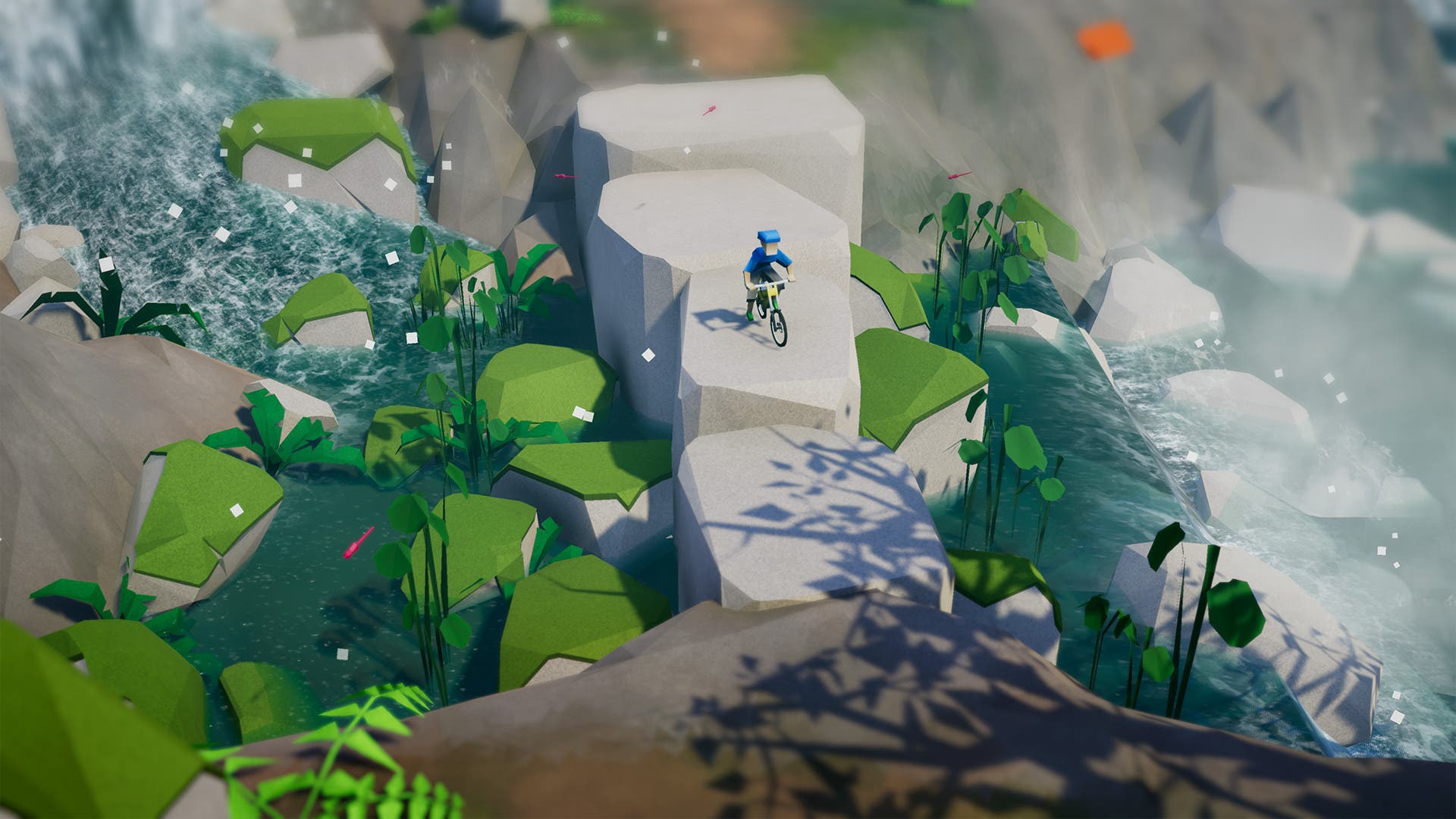 The game offers some visual depth as foreground rocks and trees obfuscate your path. I trust this is entirely by design, as to increase difficulty or hide shortcuts, but it’s a real bummer when you run into something you couldn’t actually see. In addition, depth perception feels skewed as some jumps that have be done diagonally never go as planned. It’s never a deal breaker, just unfortunate when it happens.

I had almost no issues while playing this game, at least none that truly impacted my play. During pre-release and into release, the leaderboards have been throwing errors and I’ve had to play the game in offline mode a lot. It seems your times sync when it’s able to connect, but it’s barely been able to stay functioning in my time, to at least find out where I rank. And I’ve only had one bug where I crashed, but couldn’t reset at the last checkpoint. I had to quit out of the game and restart, but that’s happened exactly once. 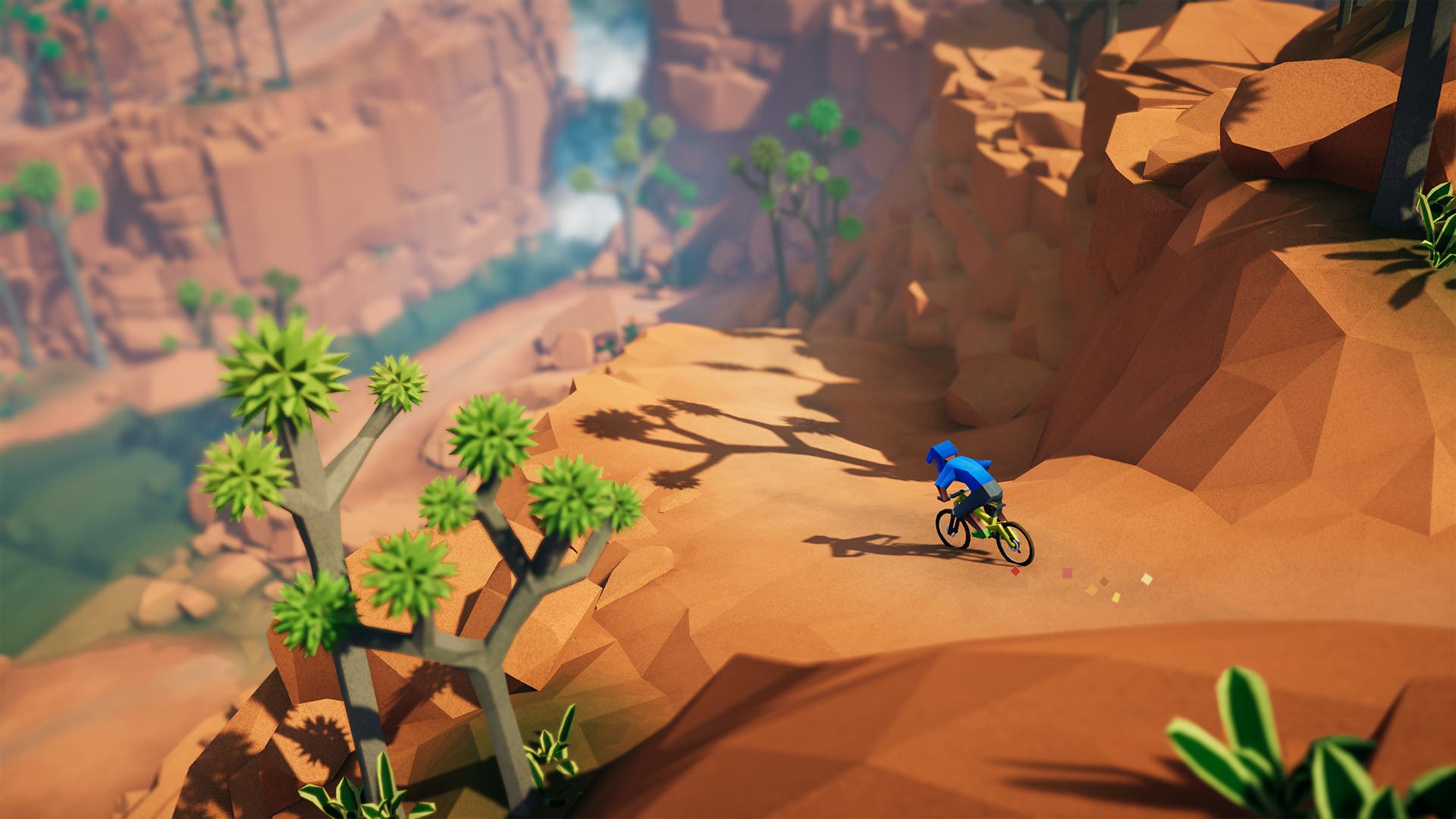 This game performs incredibly well. I was able to achieve 144fps at all times, with no dips whatsoever at any time. It’s just absolutely performant on PC, and it looks incredibly well with anti-aliasing cranked up. 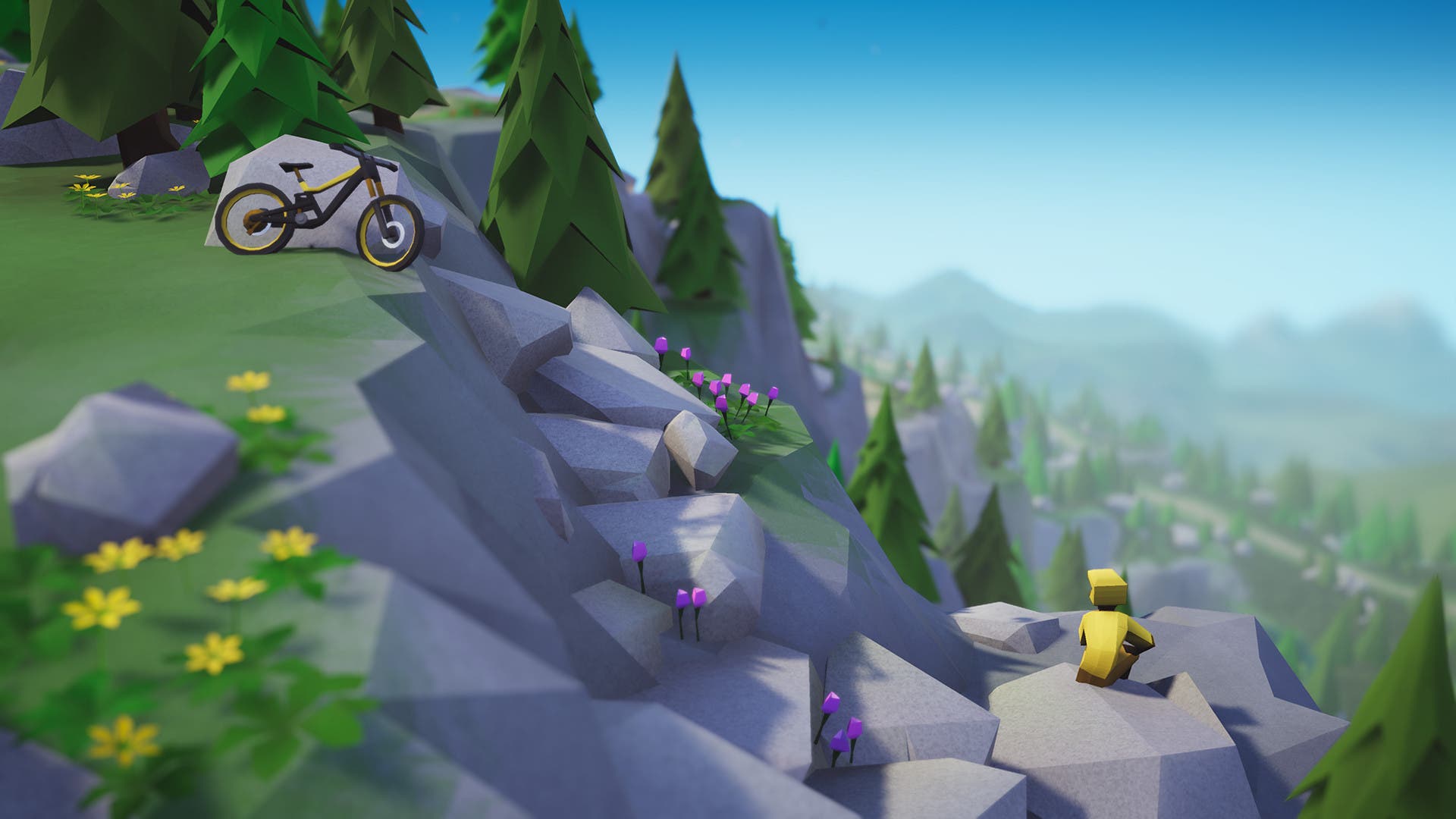 Tight, responsive controls met with highly detailed environments puts Lonely Mountains: Downhill in a class all its own. I take issue with some of the decision decisions to purposefully block your view, or how hard it is to unlock new bikes, but they’re never enough to take away from my enjoyment. The terrain, physics, visual style, and sound design are deserving of awards. This is a game that’s challenging but fair. Lonely Mountains: Downhill is wonderful, top to bottom.