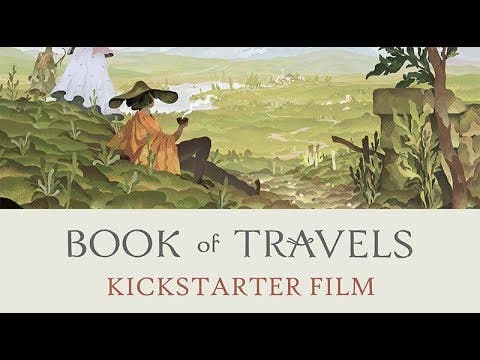 Might and Delight launch Kickstarter for Book of Travels, an absolutely gorgeous TMORPG

Last Thursday, Might and Delight launched their first ever crowdfunder. We are thrilled to have had a great start, hitting target and unlocking three earlybirds all in under 24 hours!

Back in September we made the offical announcement for Book of Travels on Steam, and we’re pleased to say that between then and now we’ve gathered a substantial and engaged community.

“We won’t just be asking you to pledge and share, but to make and create. We’ll be building a community together and helping to add into a brand new online world, and our campaign is designed around that relationship – full of creativity and authentic stretch goals. We don’t want people to simply feel like backers, but like genuine and proud collaborators” Helen Liston, Editor & Copywriter

The studio have already started the venture by gathering ideas from backers for new knotspells to add the the game – and they had a huge response.

Every backer plants a Night Flower in Travellers’ Meadow
To mark the spirit of the campaign, we’ve created a special area in the game world – it’s called Travellers’ Meadow and by the time you read this, we expect it to be filling up with glowing blue Night Flowers, as we plant one flower for each backer. We think this is going to be a very special Meadow – where players can meet up, but that they will also enjoy knowing that they helped to create it. We now have over two thousand Night Flowers and backers, and an updated meadow will be going out in today’s Kickstarter update.

The campaign is designed to open conversations and broaden the community that has already sprung up in the Official Book of Travels Discord server and beyond. Embedded in the pledges and stretch goals will be a chance to talk with developers and to add ideas and answer questions. We’re especially excited about this opportunity since our unique events design system will enable us to put some of those ideas directly into the world of Braided Shore.

“I can fill the world with almost anything – It’s a very unique way of designing a game world and also very refreshing, it’s like embarking on a true journey no-one has ever taken. And we’re doing it together with our community.” Andreas Wangler, Senior Game Designer

Book of Travels was announced on Steam last month and takes classic RPG elements but uses them in ways that create a game experience that’s unlike typical RPGs. The game is light on stats and focuses instead on roleplaying, exploration and personality. There are no linear quest lines built into the game – instead Book of Travels will be a truly living world, one where you’ll stumble across events and characters unexpectedly.

“Meadow taught us that the narratives that players themselves created and roleplayed around are far stronger than any we could conjure up. Book of Travels keeps building on that idea, but brings it more to a balance. The game design gives you hints and sparks ….  but trusts you to be the owner of your character’s journey.” Jakob Tuchten, Art Director

An campaign for a creative community
Over the last few months we’ve been sending news, lore and behind-the-scenes artwork to fans via our Travellers’ Newsletter. We’ve also opened up a Travellers’ Discord server and along with our existing Steam players, we feel we have a a fairly good understanding of the kind of community we are reaching out to. With them in mind, we hope to have created a campaign that has a lot of heart – that celebrates and shares creativity and connection amongst people who love games as niche and unconventional as ours.

What you can expect

You can see the trailer and read about the game’s unique features in full on our Steam page, including more about: