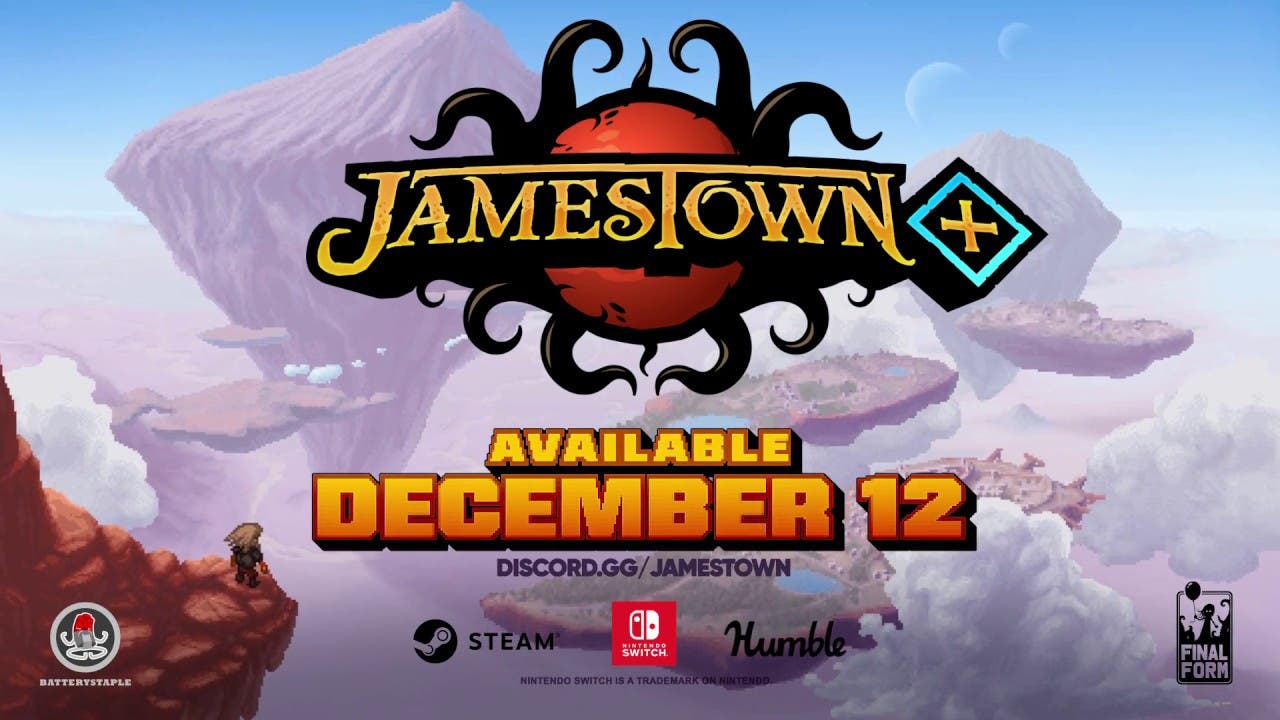 PHILADELPHIA — Nov. 7, 2019 — Jamestown+, the beloved top-down four-player retro shooter set on British Colonial Mars from Final Form Games, enters the atmosphere on Nintendo Switch™ and PC via Steam December 12. All updates and improvements debuting in the plus edition will also come as a free update to the PlayStation®4 version.

Strap in for a rocket-fueled, bewilderingly imaginative adventure across 17th-Century Mars and her moons. Escaping a death sentence on Earth, Sir Walter Raleigh sets a course for Mars, home to his only refuge: Jamestown. Absolve Sir Walter by uncovering the truth behind the disappearance of Roanoke and defending the good peoples of the New World from a Conquistador hellbent on conquering the colonies using an ancient, terrible power.

Soar through the skies aboard one of twelve Conveyances, rocket-sleds with mighty weapons. Tear through oncoming enemies with the simple but reliable Beam ship. Experiment with the Ghost ship, capable of summoning a duplicate ship to maintain support fire while daring pilots get up close and personal with the legendary sword Excalibur. Roll the dice with the Fortune ship, which mimics other ships after death and requires a high degree of adaptability.

Rise up and rebel against the malevolent Conquistador and his army of robots and Martian Warriors by weaving through streams of bullets. Dodge, dip and dive out of the way while fighting to end tyranny on Mars. Every aspect of Jamestown+ — from lush pixel landscapes to enemy design to gameplay mechanics— was hand-designed with an emphasis on presenting something fresh every 10-15 seconds. An emotionally-stirring orchestral score raises the stakes and makes victory all the sweeter.

This adventure need not be faced alone. Join forces with up to three other players of any skill level – Jamestown+ is always better with a friend. Final Form Games specifically focused on making co-op harmonious, so Jamestown+ can be as beginner-friendly or tough-as-nails as a group prefers, but always requires only three buttons. Fire, Special Attack, and Vaunt, a shield capable of emergency protection and score amplification. Ascend the leaderboards and try Judgement difficulty for the pinnacle challenge.

“Jamestown is best when played with a full squad, so we designed it to be approachable to anyone,” said Tim Ambrogi co-founder of Final Form Games. “Our game has something for everyone, so why not call up some friends or family and have a wonderful night on Mars?”

Jamestown+ comes to Nintendo Switch and PC via Steam December 12 for $17.99. The game will be available for pre-order on the Nintendo Switch eShop on November 28 for just under $15, at a 17% discount. The PlayStation 4 version will receive the same updates when the Switch and PC versions launch. For more information, please visit the official Jamestown+ website, Facebook and Twitter.