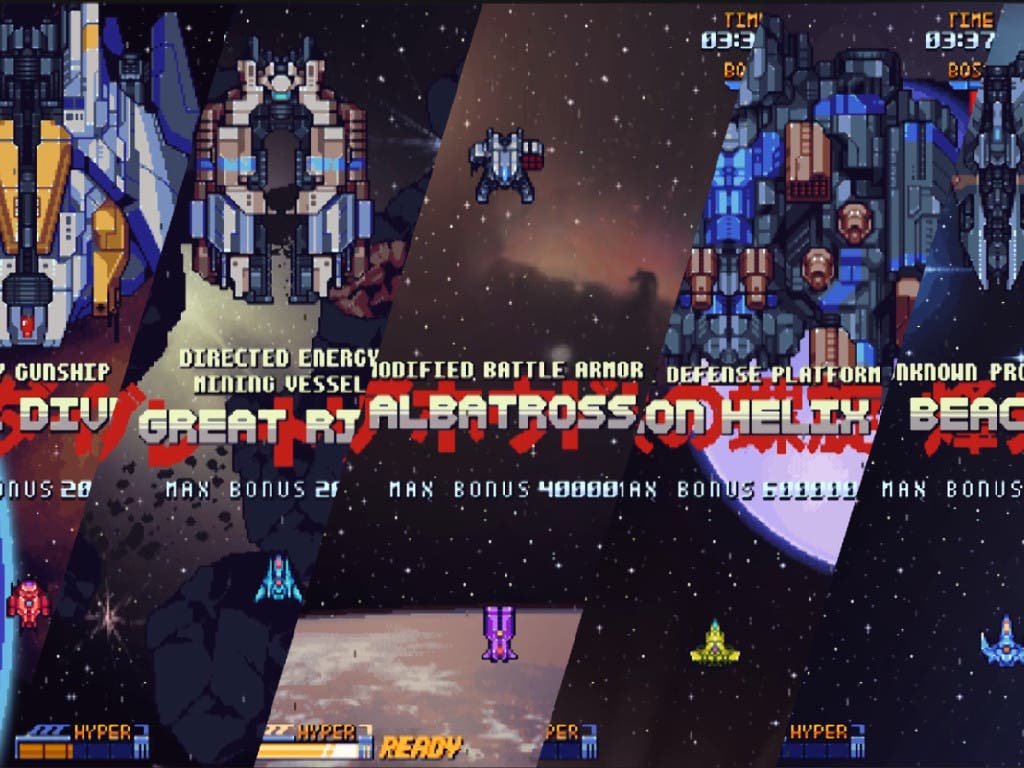 At first glance, you think you know all there is to know about Super Galaxy Squadron. An array of playable ships, vertical shoot’em up, and 16-bit era graphics. And you’re mostly right, but that’s not quite all there is to it, even if the rest isn’t all that much to begin with. This is a classic shoot’em up, or shmup in which you fight off numerous enemies, collect powerups, and try to evade “bullet hell” so that when the level culminates to a boss, you are able to dispatch them quickly.

Through each of the six stages, you’ll acquire power-ups for your primary and secondary weapons, as well as ones that boost your fire rate. Should you get hit by the enemy, you’ll drop a powerup or two, and must pick them back up again. Each successive enemy kill builds up your combo meter, and you shouldn’t clear the screen every chance you get. Because sometimes there’s lulls and you’ll lose out on your multiplier. Rings drops off of enemies that serve as ways to pick up points for a higher score, but it also charges your hyper weapon. The hyper weapon is your ultimate, the great defense to your offense, allowing you to become invulnerable while using it. Timing is everything on the hyper, and only by replaying or learning stages, will you know when it’s time to start saving your hyper for the boss.

With each ship representing a distinct color of the rainbow, the total number of ships, each with different stats is at 14. That’s probably 10 ships too many. Even though each one is visually and statistically different, some ships are not well-equipped for battle, such as having a flamethrower for a primary. And then there’s a pew stat, which, shows that the game doesn’t take itself too seriously. It probably has a mathematic relevance or the “the bigger the bar, the better the stat”, but it isn’t ever explained. The normal difficulty is not like most games of the genre. You have a health bar for starters, you are able to take damage and even regain health from fallen enemies, but the instance is rare. With this difficulty, you are able to quit and return to the beginning of the last stage you started, or should you die, can restart on that stage without having to play the entire game over up until that point. It’s very forgiving, and quite unusual for the genre. You then of course can release the masochist inside of you, and play Hardcore mode, where you only get one life and no continues. The Normal and Hardcore Modes also come with an Endless flavor, if you never want to stop. Ever.

I don’t think Super Galaxy Squadron will be enjoyed by shoot’em veterans of games like Ikaruga, or Jamestown, but there’s a lot to enjoy here. The vertical display option is a bit lacking as it doesn’t offer vertical resolution at this time. But that can all be forgotten when the soundtrack has insane guitar solos. Leaderboards are sorely lacking. It feels like you’re playing an arcade cabinet inside your own home, as there’s no one to compare your scores to unless you invite someone over.

For The Kids: It is worth noting that all proceeds for the game are going to Child’s Play charity. Super Galaxy Squadron is wonderfully made with all of the core tenants you’d expect: hardcore (if you choose), 16-bit era graphics, vertical scrolling, and an accompanying soundtrack that’s appropriate for the action on-screen. It just doesn’t do enough to stand out from its ilk, and while there are games that do this better, this is also a worthwhile investment for its approachability to difficulty and simply just being fun to play.