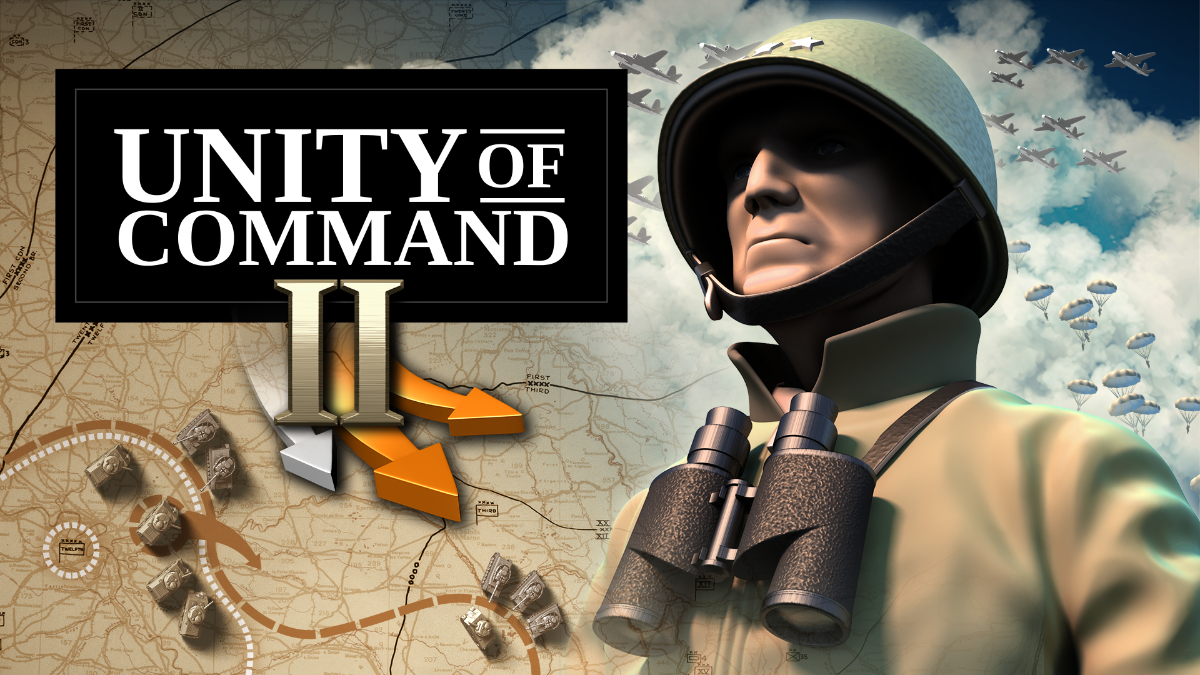 It’s been 7 years since the original Unity of Command came to Steam, and it remains a gem of an indie title. Unity of Command II retains the gem quality its predecessor was, but it’s a more polished and refined. Make no mistake, it’s no easier than the original, but it is exactly what you’d want out of a sequel. This is a game for grognards, and non-grognards alike. Unity of Command II is developed by 2×2 Games in part with Croteam, another Croatian developer to make one of the most rewarding and challenging strategy games once again. 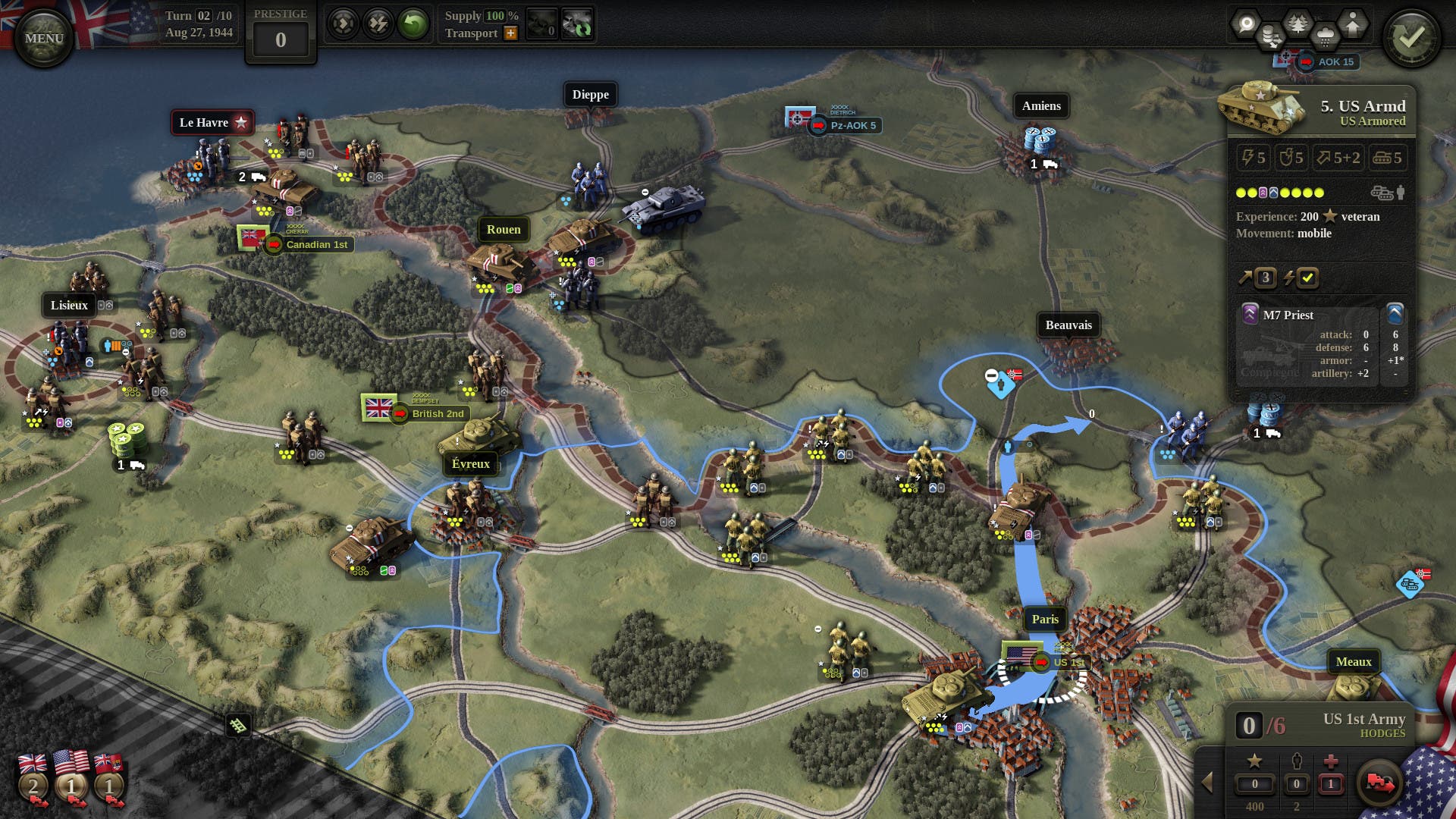 Where Unity of Command focused on the Eastern Front of World War II, in Unity of Command II you command the Western Allies (to include the US, UK, and French), also in the Second World War. There’s a single campaign this time around, titled Victory in the West. It spans 24 scenarios, like: Battle of the Bulge, Market Garden, Tunis, and so many more. You can play the branching campaign which strings the missions together in a narrative and chronological arc, or you can play them as standalone scenarios. Either way, they offer a lot of depth and different experiences each time.

Aside from the attacks you initiate on each turn, this is a game about supply disruption. As a result, you’ll have to be proactive and reactive to the things around you. The enemy will often side-step an attack, and you’ll have to react to that, and decide how you’ll fight them next. Enemies love to upend any planned moves you have, so staying on your toes is paramount. 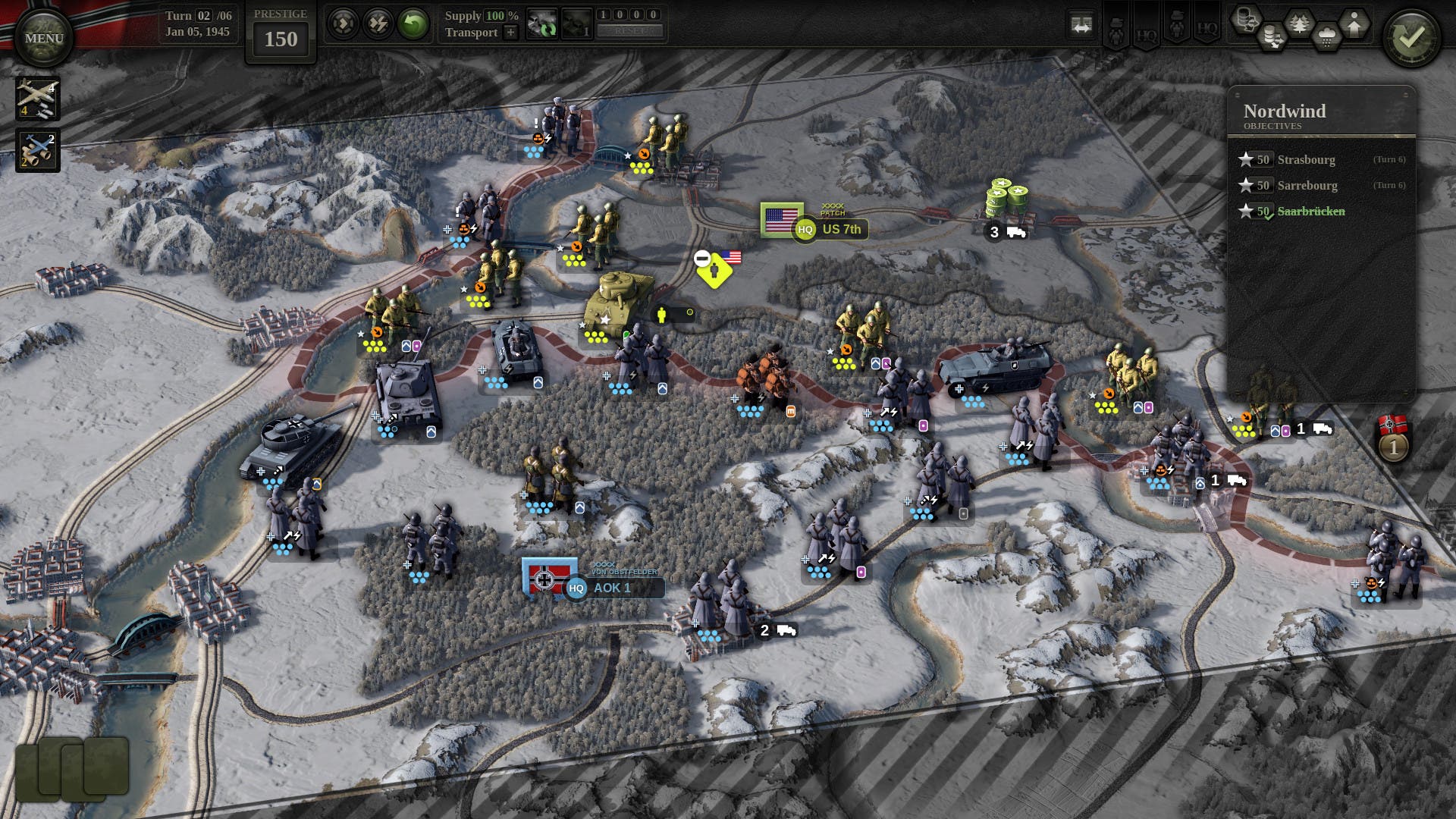 New to Unity of Command II Is a fog of war. Not all enemies will be visible from the get-go, which can make planning a lot more difficulty, but it makes things a lot more interesting. You can use planes to recon areas, capture forces out on their own, or upgrade your HQ. Enemies dip in and out of the fog of war, using it strategically and obfuscating their true forces. We can assume the same for the AI, but that’s never really explored or understood.

One of the complaints of the first game was that the maps are bigger, allowing for them to be explored and experienced for longer. Unity of Command follows a strict turn-based limit, which means in due time, a game will be over and you’ve either won or lost. I absolutely love this concept, and failure is a means to replay these excellent scenarios to try something different. The bonus objectives as part of the game are optional, and delve into “what-if” scenarios that alter history. So the game is so hell-bent on reciting history to the fullest, allowing it feel more fluid. 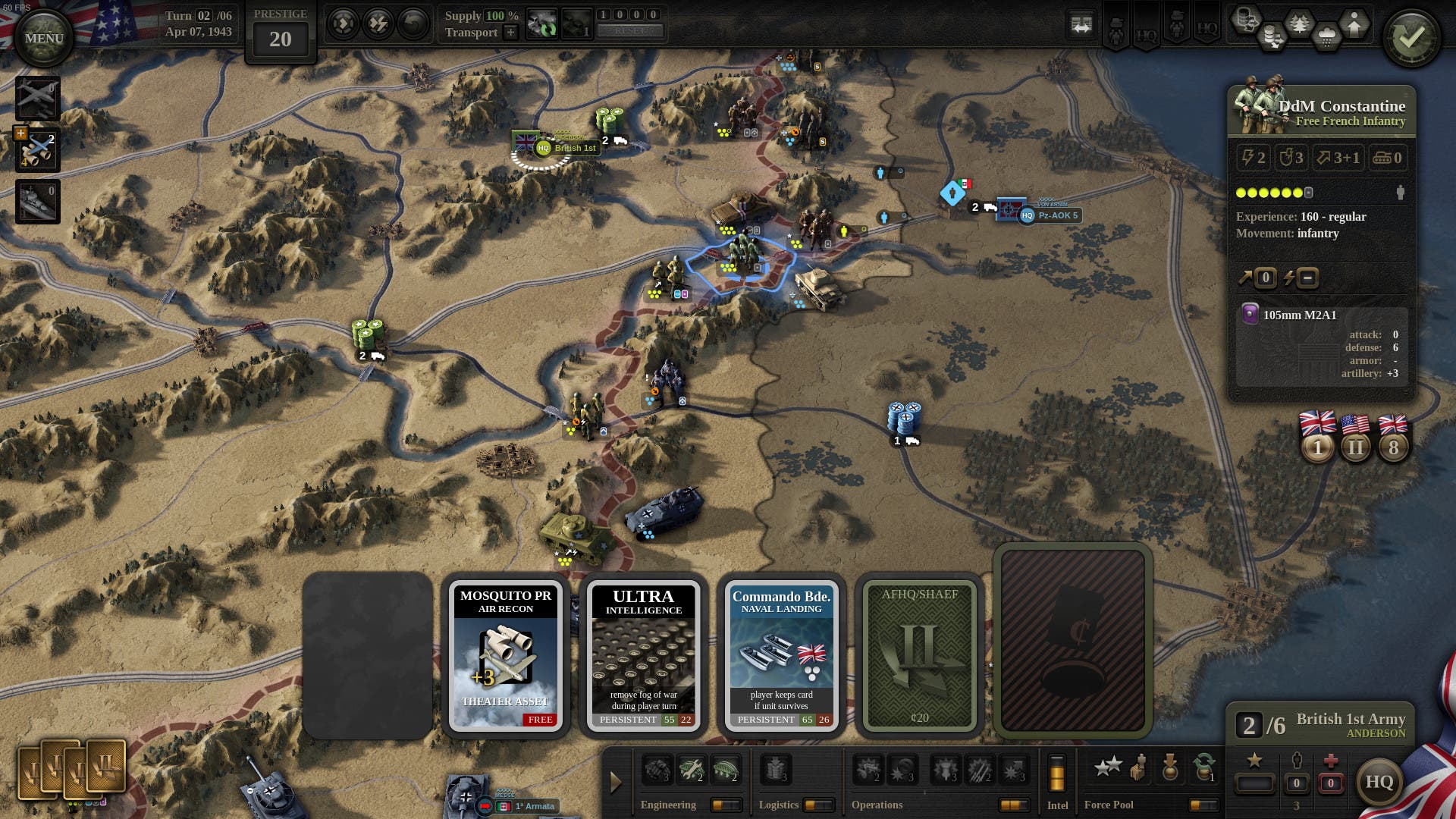 You can now utilize theater assets such as air attacks, naval bombardments, and recon planes. There’s cards to play, depending on the scenario that puts these theater assets into play. Air attacks always have the chance to miss, no matter the size of the units. You can utilize the intel you gather from captured units to make decisions on where to go and what to do. You can’t ever rely on these being truly helpful, but are a great addition all the same.

You will attack mostly on land, and sometimes in the air, but now you can perform sea invasions which feels so drastically different from the first game. How you use your units, must be well thought out. You’ll have to maintain supply lines to your units to furnish them with what’s needed to survive assaults and forward pushes. If you stray too far, or get yourself surrounded, you might find yourself becoming weaker. Supplies are everything in Unity of Command. 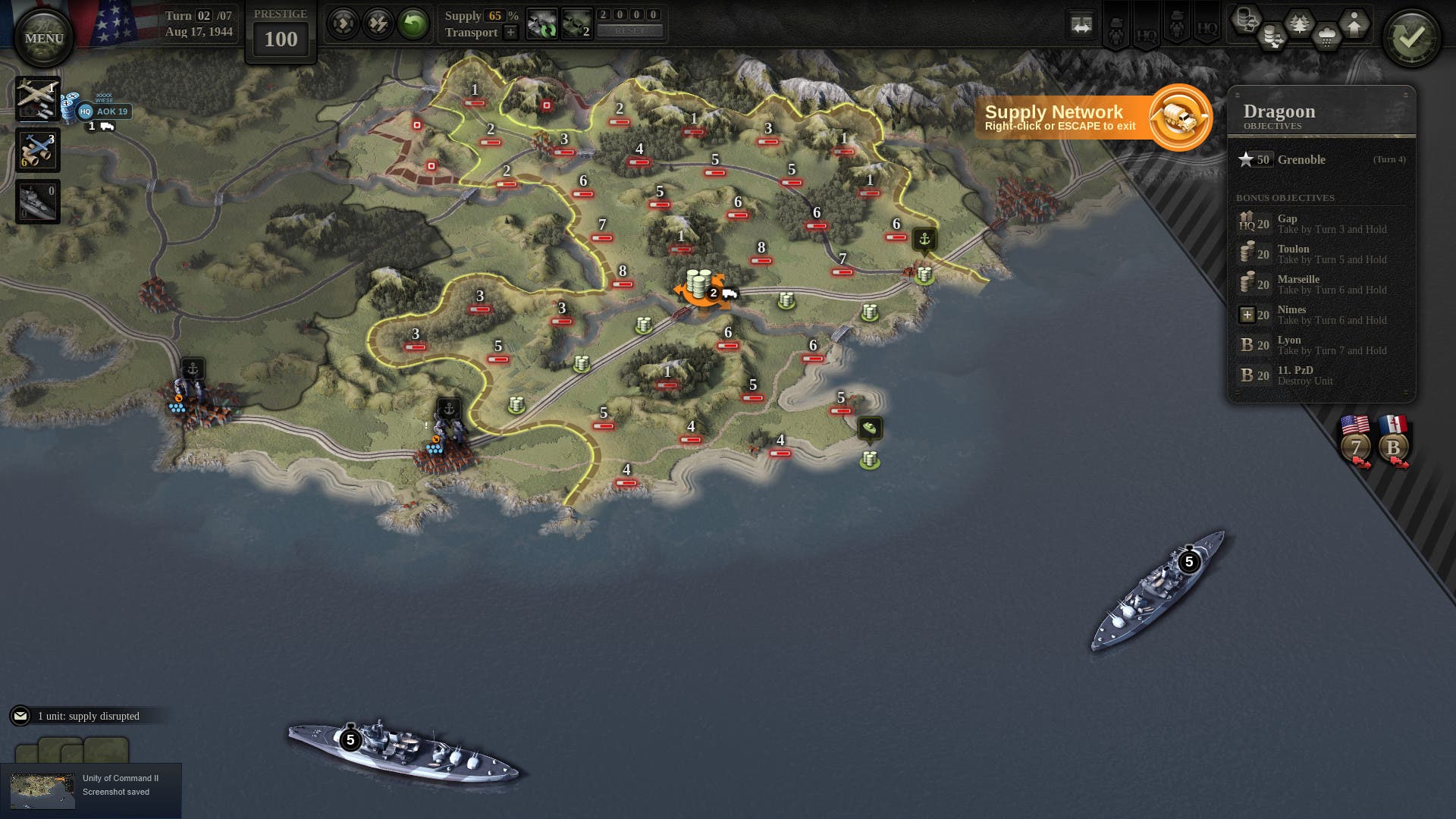 Headquarters are not new to strategy games, but they are in Unity of Command II. You now have HQ command points, these enable what abilities you have. Each map begins where a HQ is established, and it can be moved up to reinforce your units on the field. You can also deploy new units on the field, so long as they are in range of existing units and capture points. It’s a really neat system that’s underutilized until you start poking around.

You’ll find that the crux of the game, when possible, revolves on “surround and capture”. This works both ways, but for you to succeed, you must do this to enemies. Surrounding lone units, you’ll take them prisoner and extract intel. But doing this in the grand sense, deprives units of supply, and makes them weaker over time. As you hover over a unit you can engage with, a ratio is displayed for how many of your units will die to theirs. So if you see things like 4:1, 3:0, and so on, your odds are not good. And the risk is not worth it. So if you surround them, and drain them of supply, soon you’ll have ratios of 0:2 or 0:3 that guarantees wiping them off the map. This is what drives most of your encounters, and is a necessary tactic. 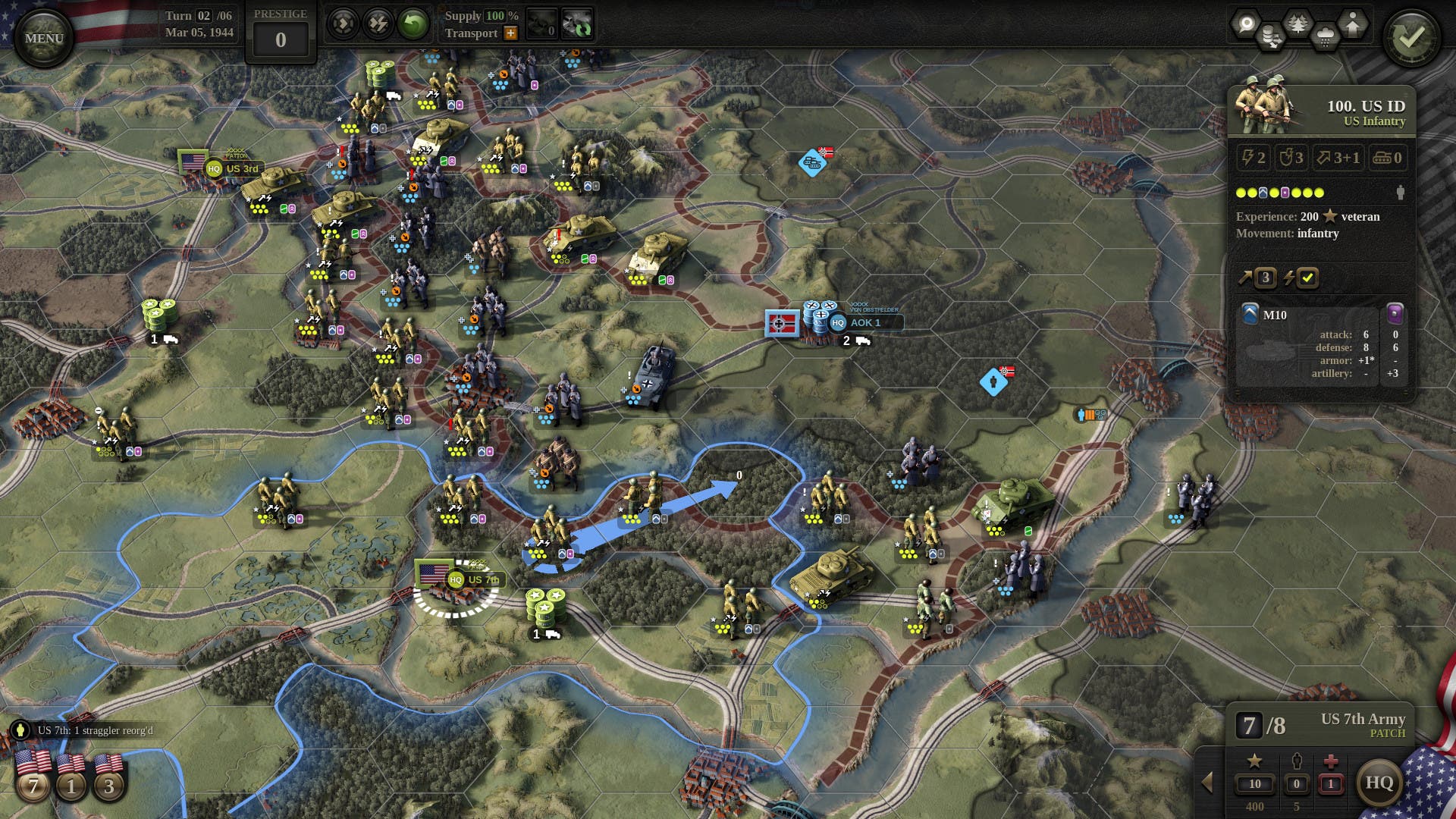 There’s a new game engine that powers Unity of Command II, and it’s a totally new look that recaptures what simple look of the original. There’s still no zoom, but you never feel too close or too far from what’s taking places. The hex grid is hidden by default, but can be turned on later. It’s a gorgeous game that easy is to read and understand everything that’s happening. Everything you need to do in the game is accessible on a single screen UI, there’s no flipping screens or being buried in menus. It’s all up-front for you to use, and so smartly designed.

Unity of Command II again includes a scenarios editor so that you can create the scenario of your dreams, and it’s all integrated with Steam Workshop. While crude, it requires you know map names by heart, but is easy to get into. It’s worth noting that there’s no multiplayer currently in the game. I myself didn’t play it much, but I’m sure it’ll disappoint those who did. I’m not clear if there’s plans to re-add it, but for now, this is a single-player game only. 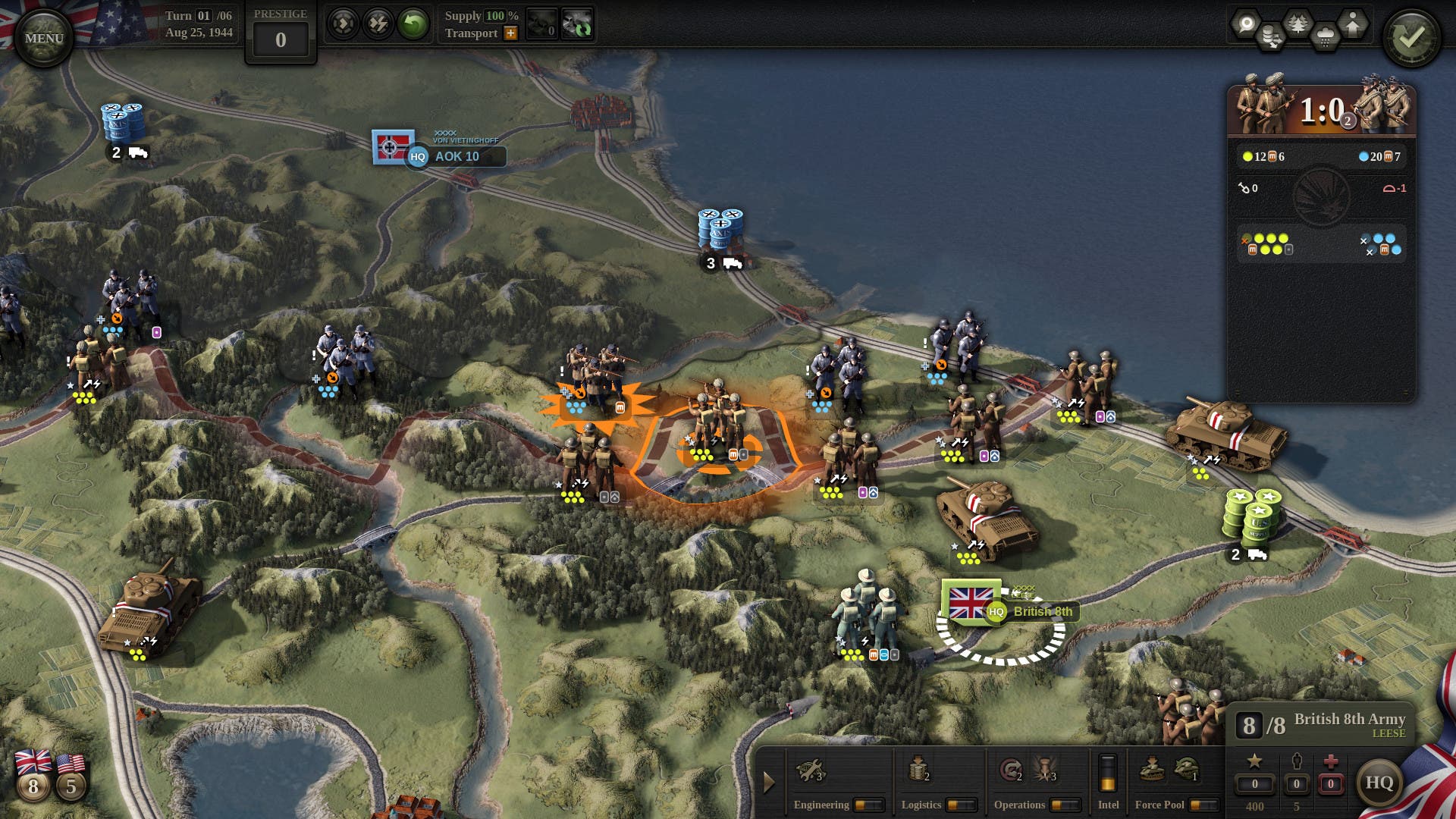 It should come as no surprise that Unity of Command II surpasses the original in every way. Its one-screen UI is still the one to beat, and reflects the original in all the right ways. There’s a lot new to the game, and it offers so much depth where there’s so much to talk about. I adore the strict turn-based time limit, as it gets you to think in a different way. Unity of Command II is wargaming at its finest.