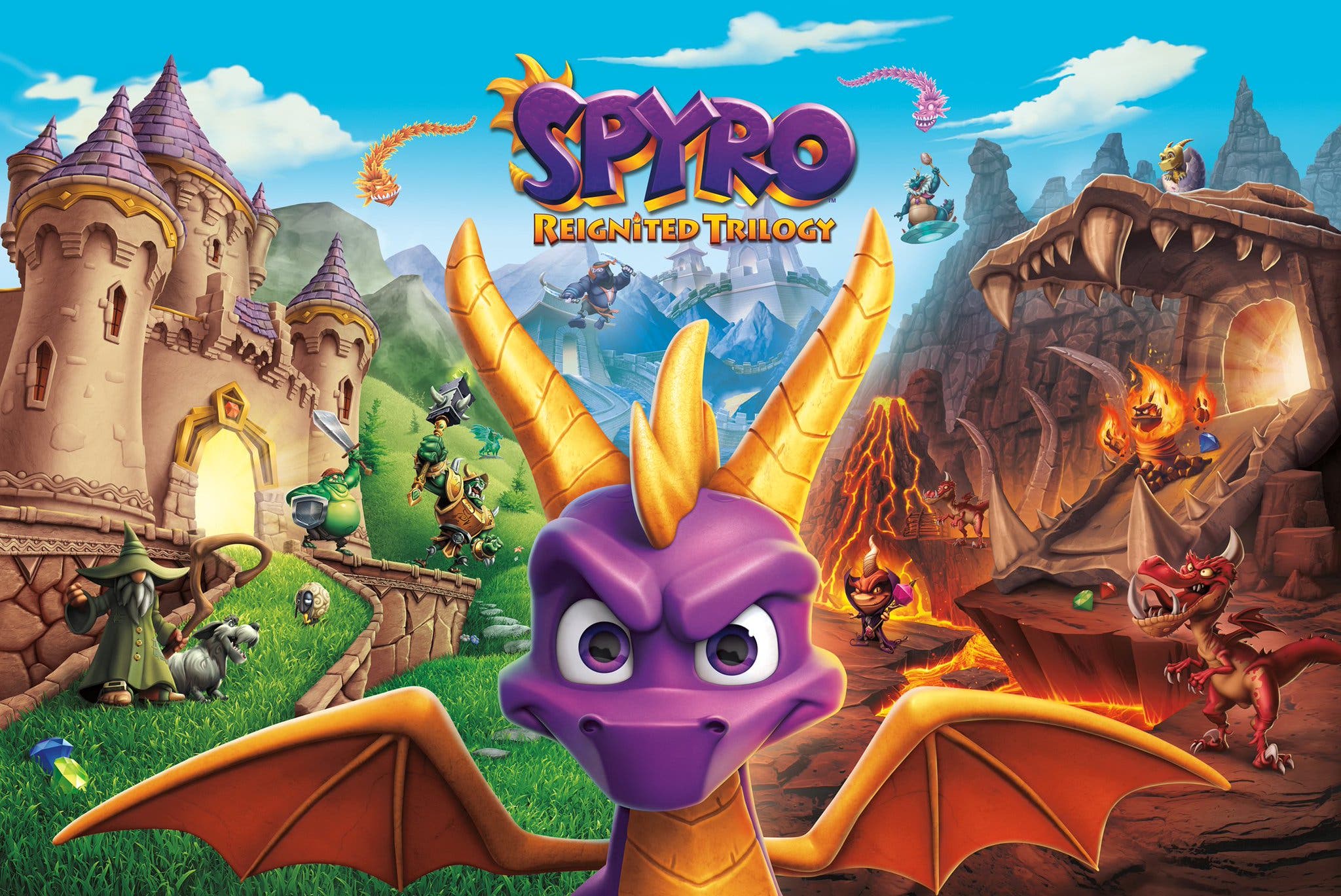 Everybody loves a good story involving dragons, treasure, and adventure. You know what else everybody loves? Reliving their old memories and feeling good. There’s a more concise term for that sensation, but I’ve thrown it around enough lately that I’m taking the scenic route instead. 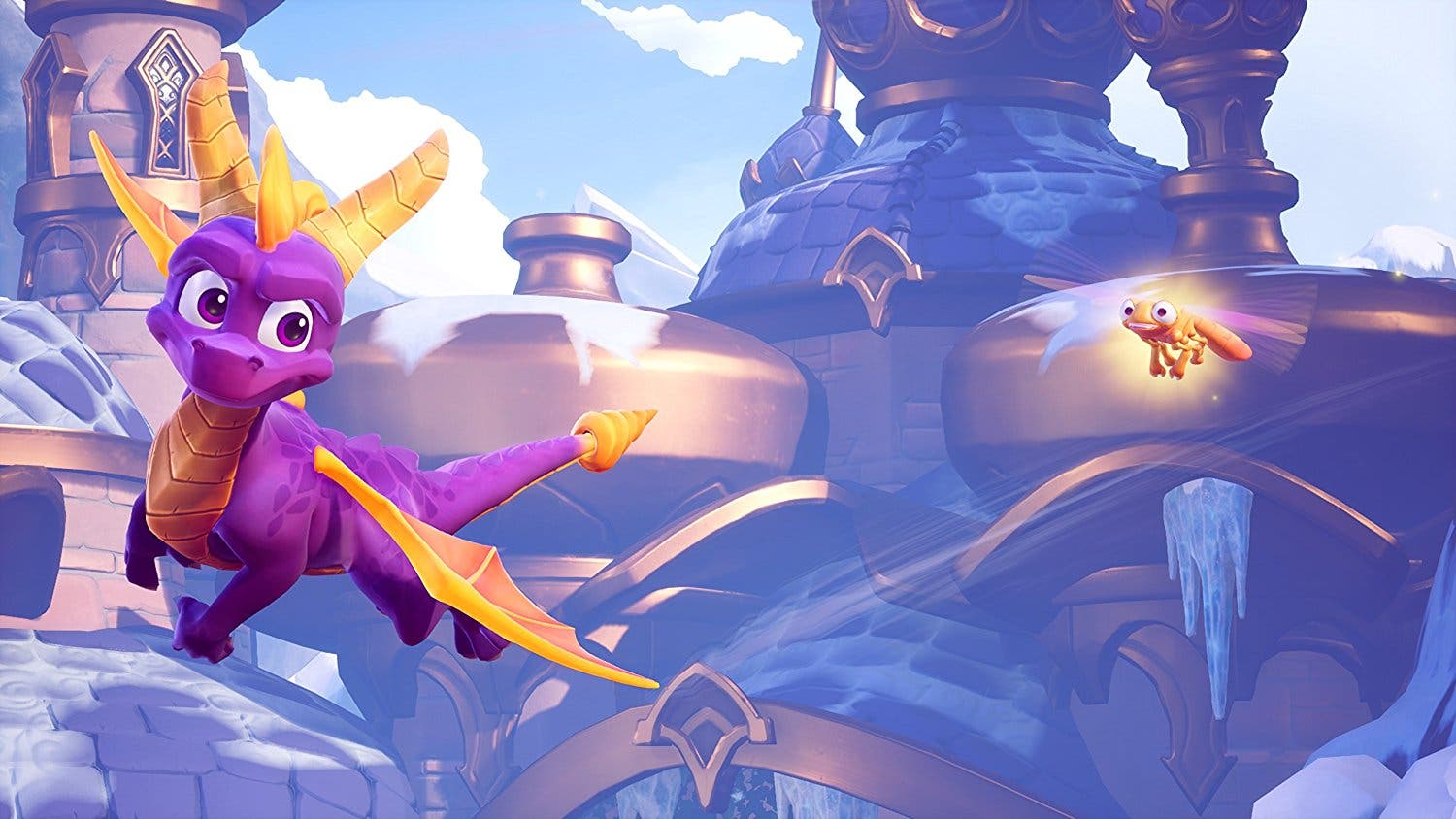 REMASTERS! They’re everywhere. They’re very popular with the kids (and adults), or so it would seem. And while some of them are miss more than hit, every once in a while a faithful, thoughtful re-imagining of a game or series from your youth shows up and you’ve got yourself a Grade-A sense of The Warm Fuzzies™. And who better to help you get your Warm Fuzzy on than with a plucky, scaly little dude who breathes fire, collects hella treasure, and regularly saves the day?

I’m speaking of course about Spyro the Dragon, who is back for a third time to win over the hearts, minds, and gems of gamers young and old everywhere with Spyro Reignited Trilogy.

Before we proceed, an important detail/confession: I never played any of the Spyro games. Not the original trilogy on PS1, nor the rebooted trilogy with fancier graphics and celebrity voice actors on PS2 (how they got Elijah Wood for the voice of Spyro is totally beyond me). That means I’m a newcomer to the series, able to judge based only by what’s on display here. I won’t be able to make much direct comparison to the old games, but I think the quality of the game in this case will speak for itself. Good? GOOD!

One of the main concerns with any remaster is whether the game will be able to walk the line between faithfulness to the original and updating game play enough so that the new iteration is still fun to play by today’s standards. It’s a difficult balance, and most games inevitably slip off to one side or the other. For the most part, Spyro Reignited Trilogy keeps it’s footing, particularly given the design of the source material.

At its heart, the Spyro trilogy is a set of games about exploration and collection, an archetype that defined the early days of 3D platforming, with titles like Banjo Kazooie, Conker’s Bad Fur Day, Rayman, and so many others all working with the same building blocks. There are nuanced differences at play, but generally speaking things play out in a set of 3D worlds with a bunch of collectible items scattered around, and you have to run, jump, and fight your way through the landscape to get your do-gooder hands on as many of them as possible to progress to the next major zone.

Spyro‘s worlds are broken up into sub-levels that you can explore individually, and the items gems you collect build toward a cumulative score across the entire game. You’ll find dragons to rescue, baddies to chase down to rescue eggs they’ve stolen, and a vast number of gems and chests to gather. At times you’ll meet allies with unique abilities that you can take control of, which changes up the action from time to time, but it’s all in service of getting all the stuff. 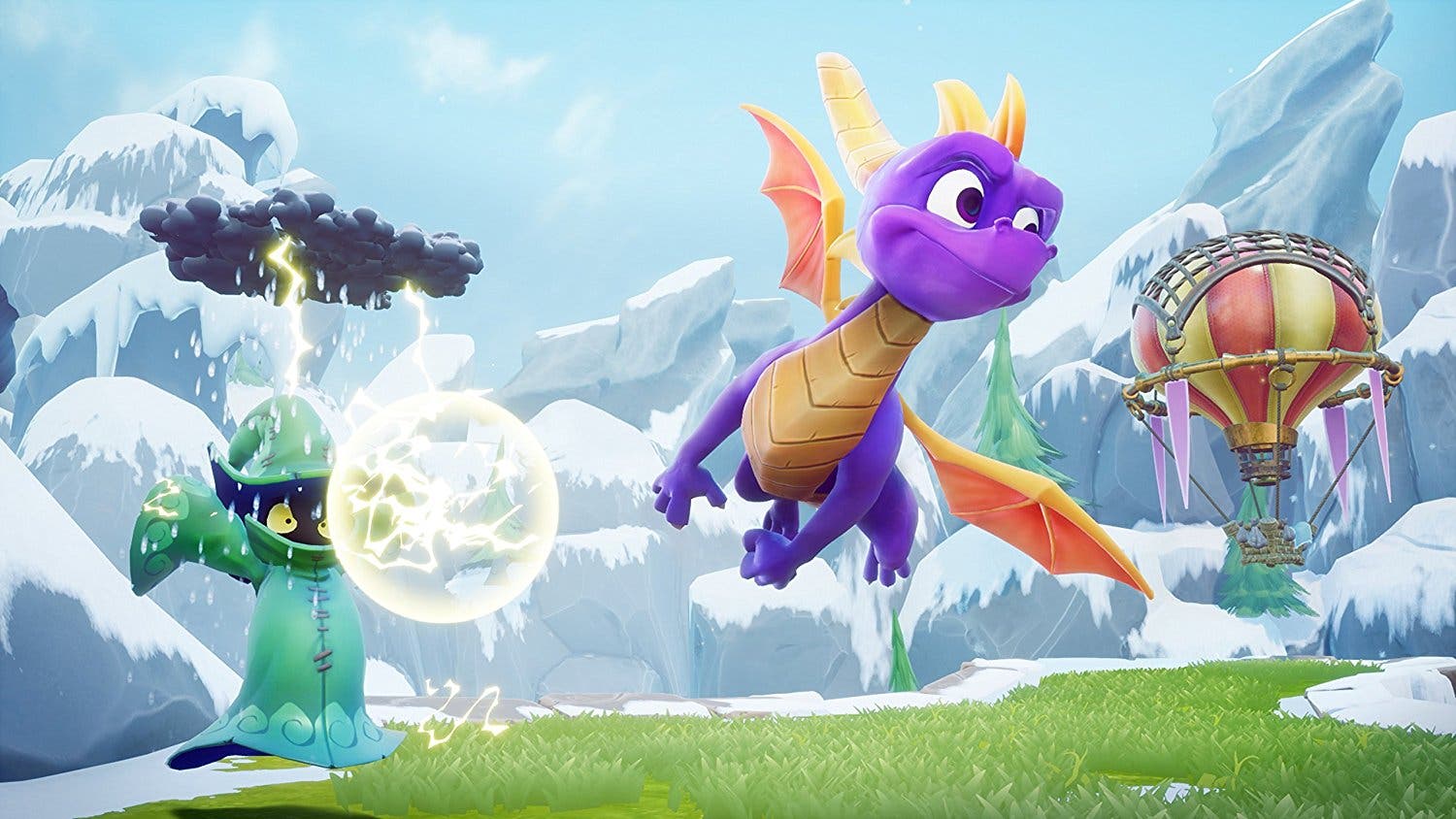 Overall, the games feel particularly tailored for younger audiences in terms of difficulty and visuals. This isn’t necessarily a bad thing, and in fact it has been surprisingly enjoyable to dive into a game I would have played and likely enjoyed as a child. The game is easy to control, the design of the levels generally makes them straightforward to traverse and discover, and enemies are fairly slow moving and not super aggressive, giving the player plenty of time to react and deal with incoming attacks.

Gem collection requirements for advancing to new areas are forgiving, allowing you to sort of breeze through and pick up only the most obvious/on the way gems and chests if you want, and even the amount of this stuff on the critical path of each level is plentiful. Boss encounters are designed with teaching and observation in mind, giving you plenty of low-risk opportunities to derive their attack patterns and capitalize on their moments of weakness. 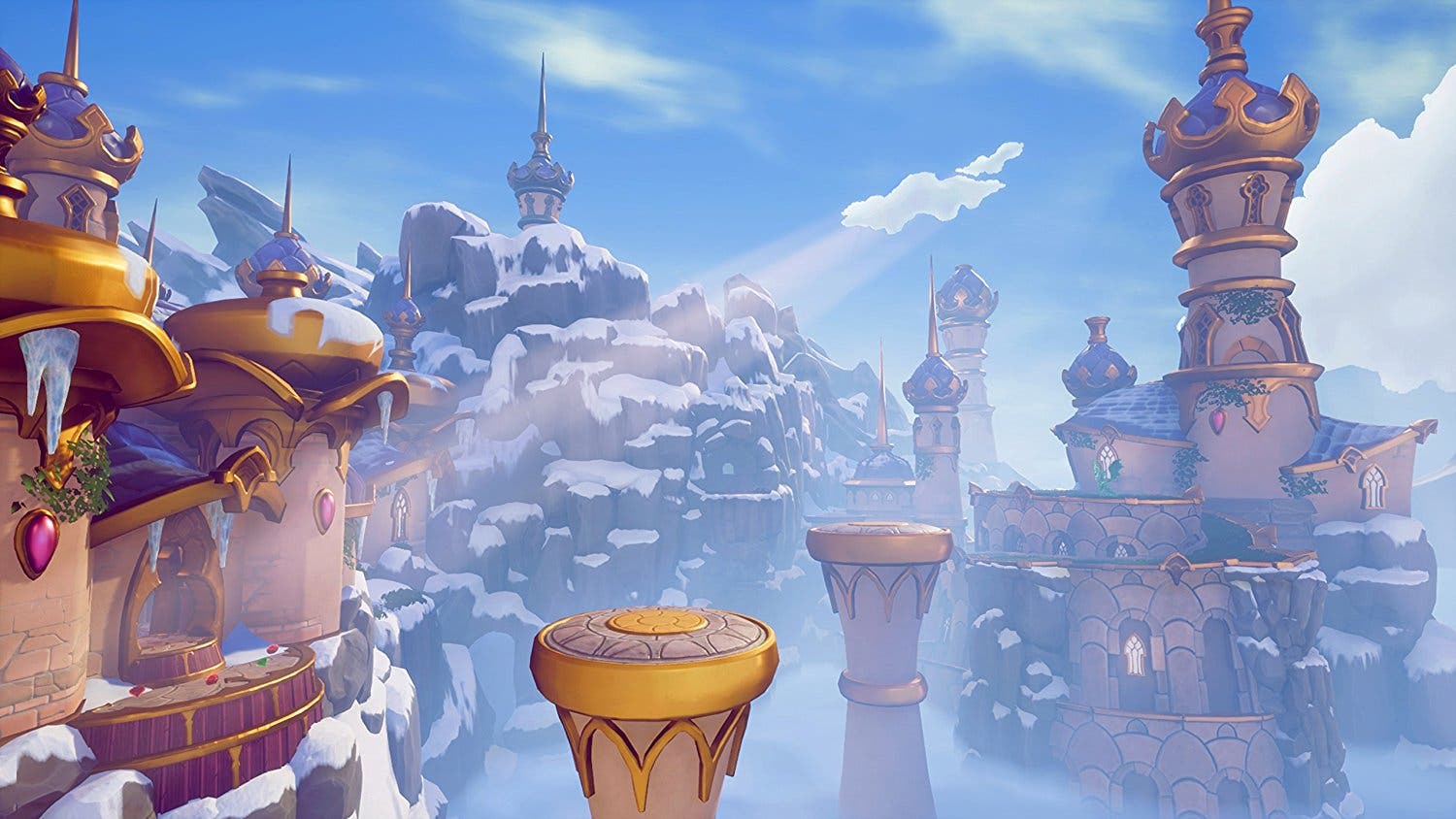 In fact, the game does a really nice job of teaching mechanics as you go without over-tutorializing. Most of the time, it shows rather than tells, and that makes the experience of learning how the game works and playing it really enjoyable.

Adding to this sense of enjoyment are Spyro’s excellent visuals. The game’s art style is one that borrows heavily from computer-animated movies of the past decade, and at times it looks as though it easily could be adapted from a big budget animated feature film. Facial animations during cut-scenes are lively and intricate, and character animations during game play are extremely fluid. There’s some great work being done with textures, lighting and particle effects to really punch up the overall visual quality, and the payoff is great. I played the game on Switch, and even there I was extremely impressed with how good Spyro looks, and its near-constant 30FPS frame rate. 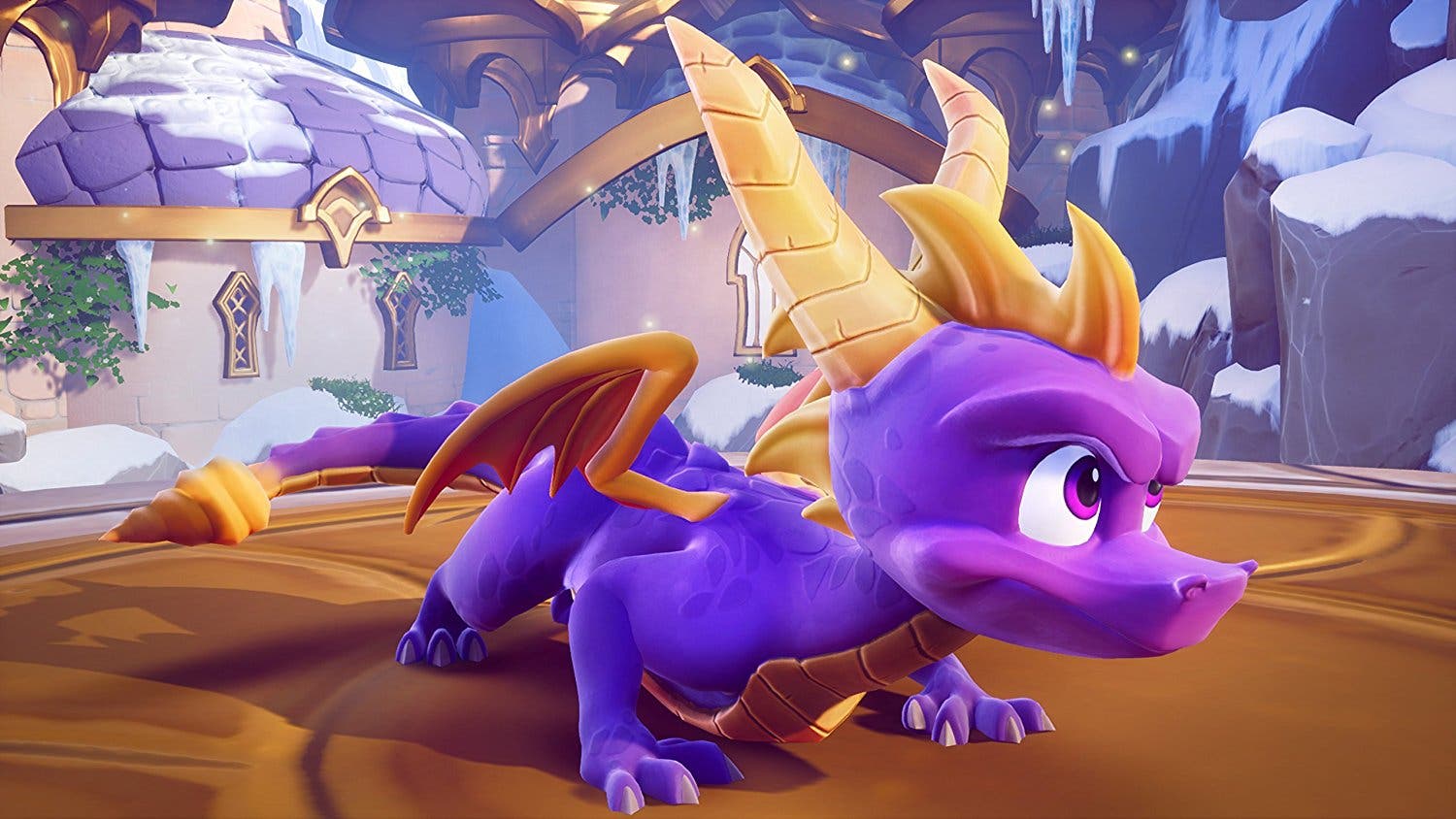 It is readily apparent how much love and care Toys for Bob has put into Spyro Reignited Trilogy. This is a project very clearly close to their hearts and one they wanted to do justice by, and their enthusiasm for the franchise shows. It’s not the most challenging or even interesting game, but it is very fun to play and it feels incredibly polished.

With Spyro Reignited Trilogy, you have the rare chance to plunge back into a world you may have spent countless hours exploring as a kid, with all the fit and finish of a present-day title. It’s sure to please longtime fans of the series, and newcomers will find plenty here to enjoy. There’s never been a better time (or a better way) to play Spyro.