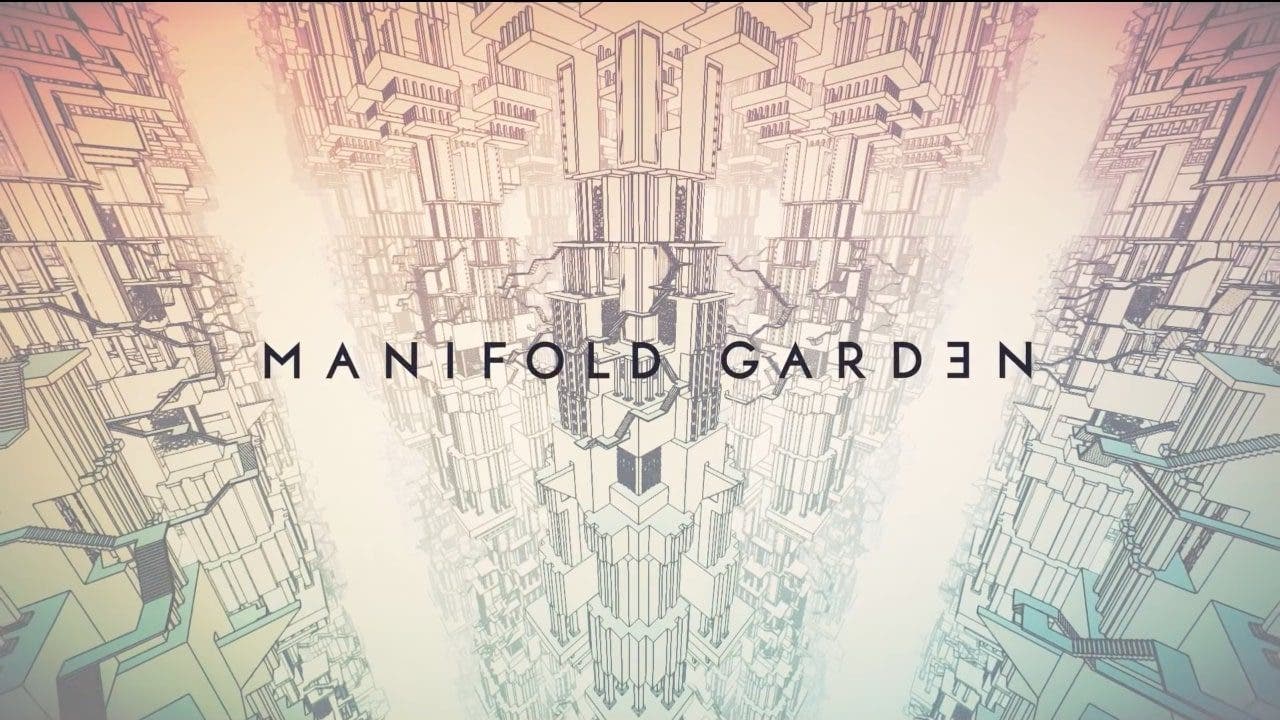 Puzzle games in 2019 are pretty tough to pull off. Once a staple genre of PC gaming in its infancy, modern experiences are often perceived as being so much more diverse and interesting in what they have to offer than your standard brain tickler. And it’s true that the exploratory, sometimes experiential games that made the genre successful in its early days don’t always have the same wide appeal as they once did, nor the punch and bombast of most action-oriented titles we play today. 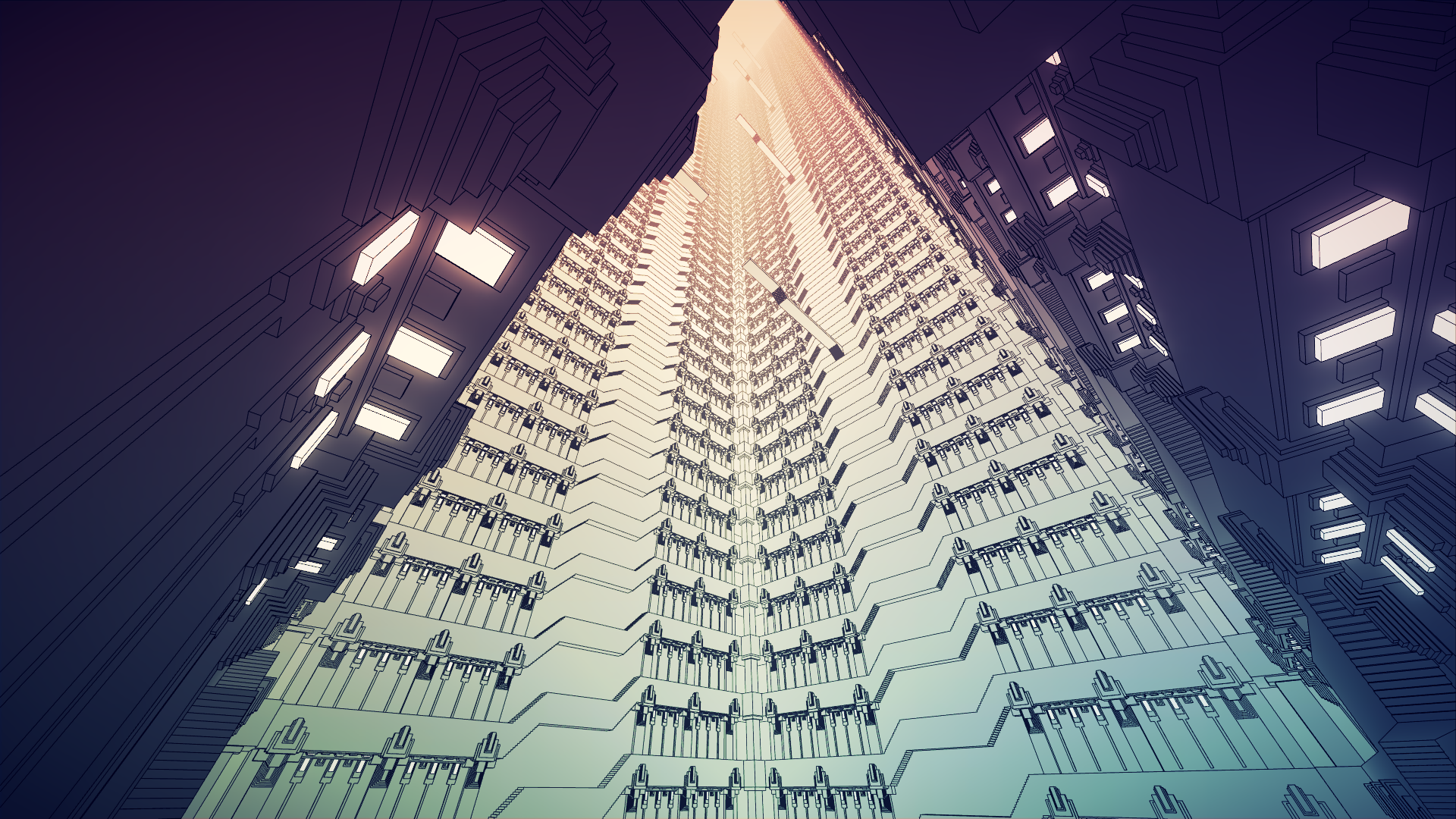 Every once in a while, though, something special comes along to challenge your perception of what puzzle games are, what video games can do, and what the limitations of gaming may be. Ironically, as we’ve drifted away from puzzle games as a pillar of gaming, other genres have fallen into familiar patterns, leaving room for experimentation and creative freedom for titles like The Witness, Q.U.B.E., or Antichamber to emerge.

Manifold Garden arrives after five years of development and hints of its brilliance at trade show previews to show us definitively that there’s still lots of room for innovation in the space, and that in many ways we’re yet to really scratch the surface of what’s possible, but most importantly that it has some really magical moments to offer. 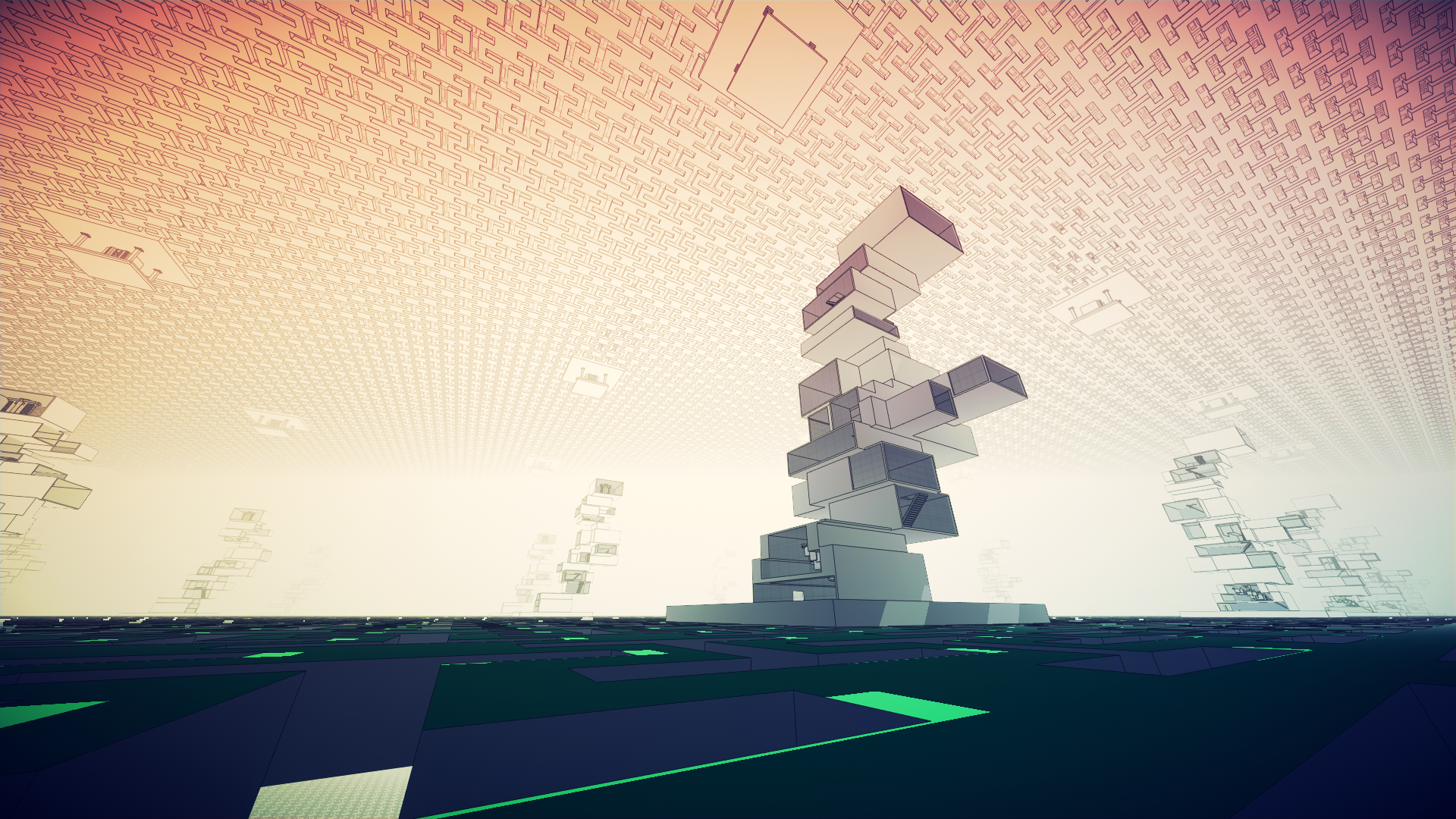 Manifold Garden comes out the gate not swinging, but beckoning, inviting the player into its world that is both familiar and foreign. In front of you is just a hallway, and a door, things you know and trust in an otherwise strange (if not comfortingly warm) void. You walk forward, expecting to find something, only to hit a dead-end and another door in front of you, only it’s oriented toward the wall on your right. It is of course at this moment that you learn of your ability to shift the direction of gravity by simply pointing at an adjacent surface and clicking on it. Suddenly, the unreachable door is as accessible as any other door you’ve ever encountered, and you make your way forward.

The game’s developer, William Chyr, has clearly been paying close attention to the big success stories in gaming over the past decade. Where there are concepts to teach, good level and spatial design are used to start small and build upon them naturally through progression, rather than explicit tutorials for everything. Most of the learning in the game happens by discovery, rather than direct instruction. It’s a great tactic put to strong use here and helps you as the player feel accomplished and more sure of your own understanding. 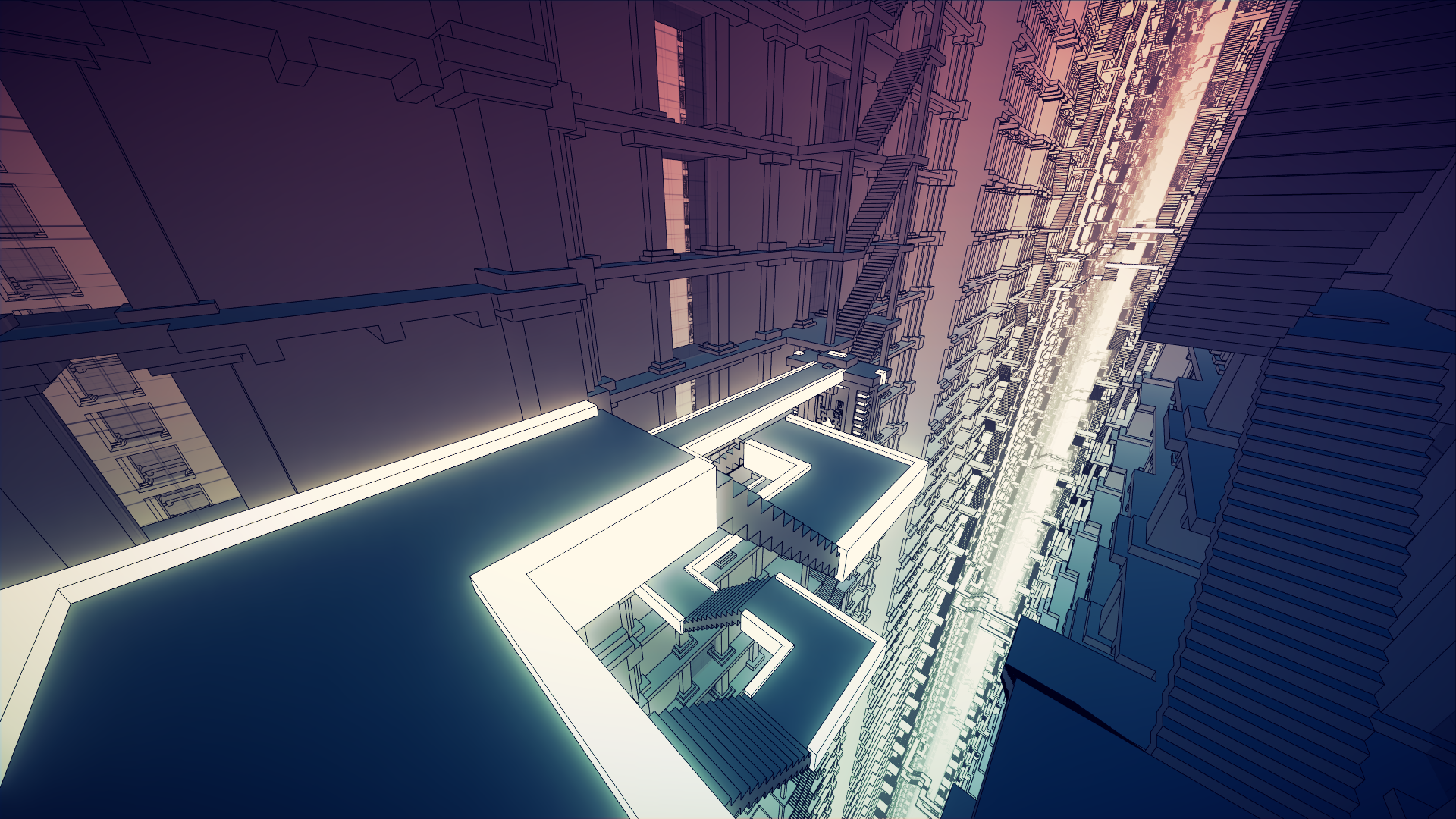 This is all very important because before long, Manifold Garden is throwing more and more delightful weirdness at you, quickly revealing its world to be one of infinite possibilities and impossible architecture, like a fractalized Escher illustration. Even as you gain confidence in the malleable nature of the world’s directional forces, you learn of the world’s literally infinite nature as you see the structures you’re traversing repeated forever across the expanse.

That warmth in the world is an important choice; where so many spatial puzzle games have opted for a very stark or even cold white, the warmer tones of Manifold Garden help you feel more at ease with your surroundings, innately trusting that things aren’t going to suddenly go horribly wrong. For a void, it feels somehow lived-in or habitable, rather than sterile. 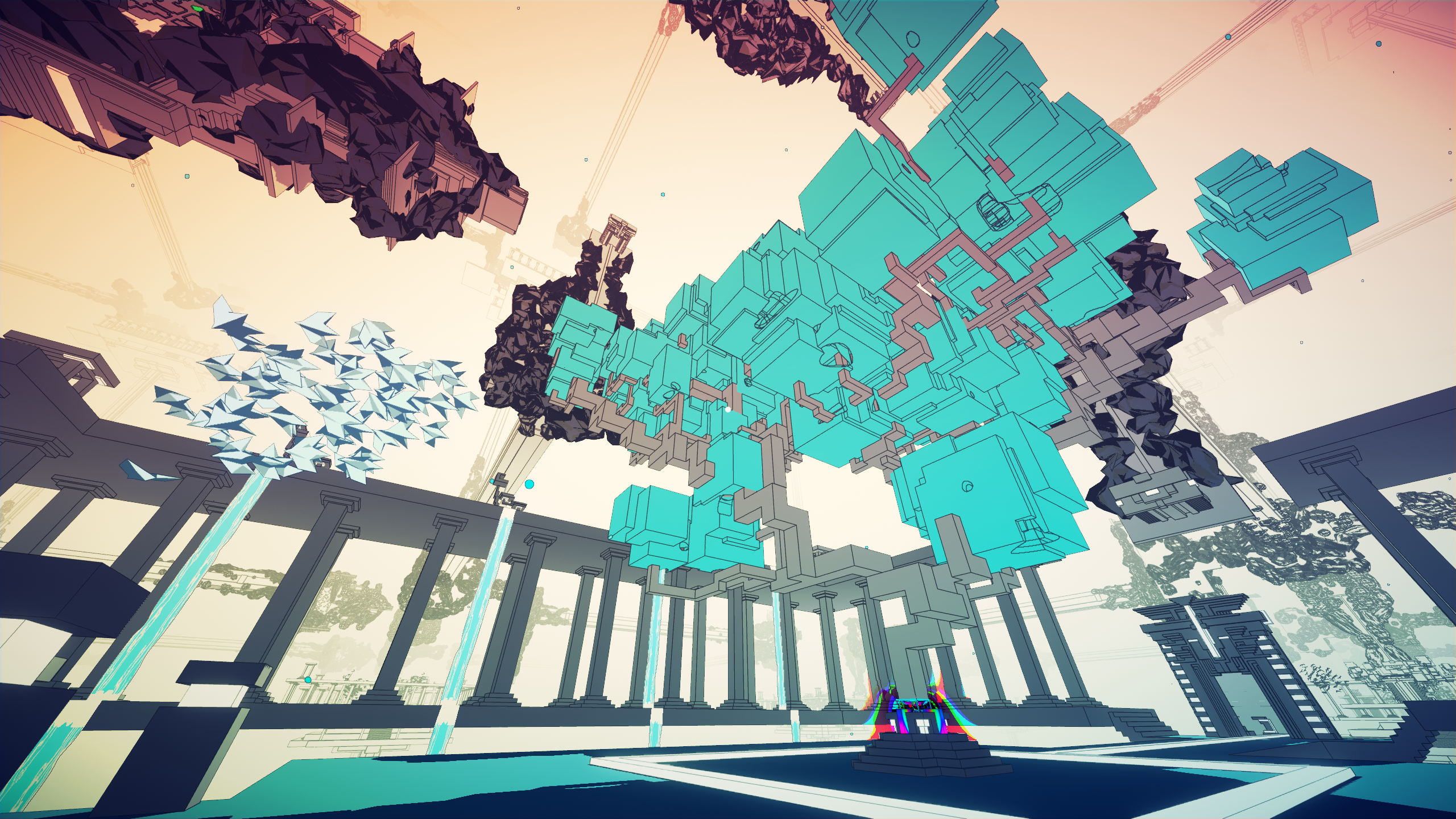 The Journey is the Thing

Part of what makes Manifold Garden work so well is that the puzzle solving doesn’t really feel like puzzle solving at all. It’s a series of spatial problems, challenging you to use the nature of the world itself to make progress and navigate through it. The challenges are generally along the lines of “how do I get from this spot on the floor to that spot on the wall so I can go into the next room and turn that staircase outside the right direction?” There is the occasional glowing box that needs to be placed on a glowing receptacle to open a door or act as a platform, but mostly it’s about moving through the space.

New concepts are introduced slowly over time, each of them in service of the overall theme of helping you move through the world. Some of the turns are surprising, often re-framing your understanding of the world around you. The world itself is constantly surprising you, giving you stunning new vistas to gaze upon and pushing the ideas of infinite geometry further and further as you go. And that first time you step off a ledge into the unknown will be both exactly what you expect, yet still thrilling (or terrifying) as it happens. 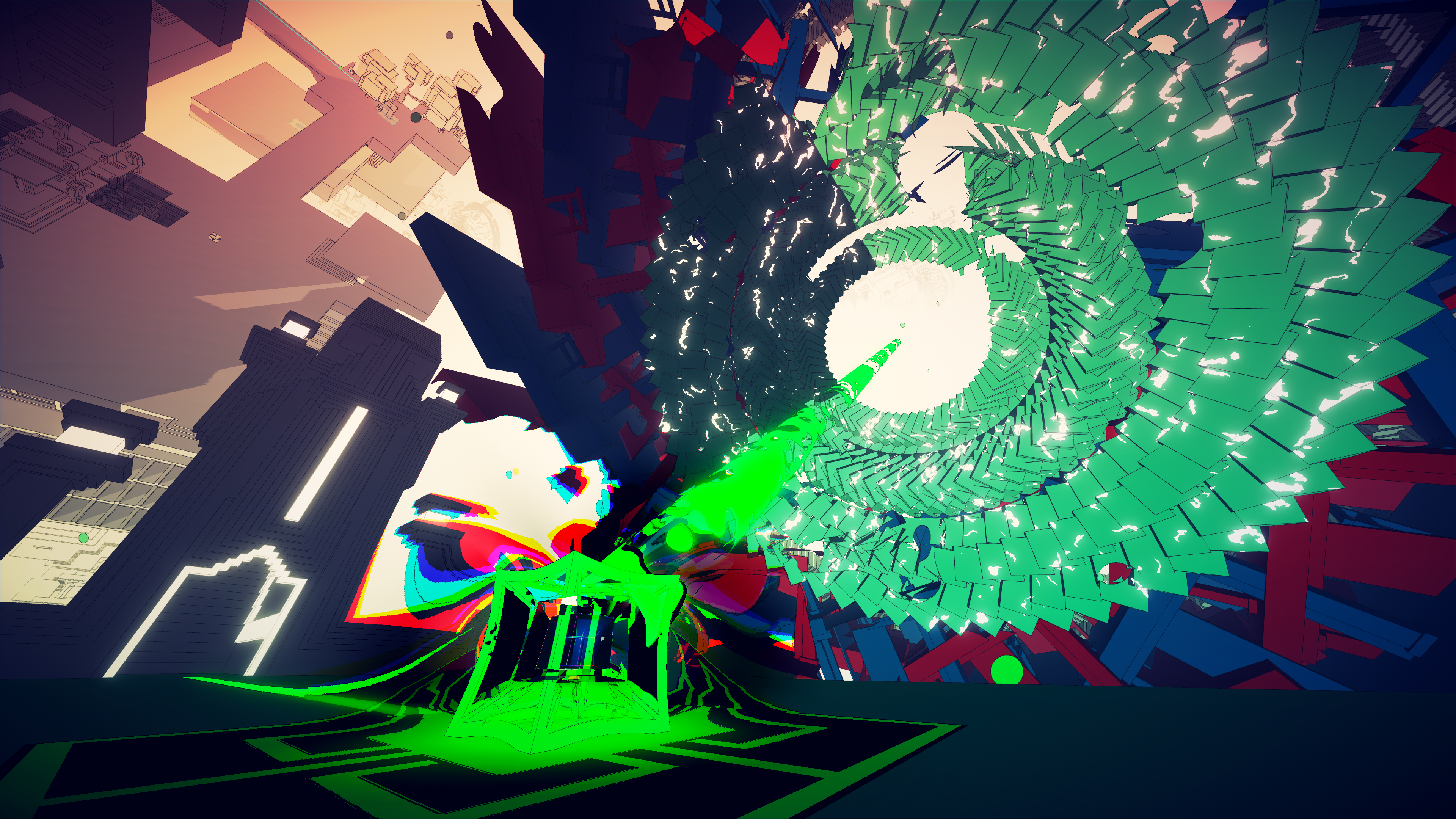 The whole point of the game is to move through the world, and to see what it has to offer, and there are some truly awesome things to see in this game. Spaces and structures which could never be in our reality come together effortlessly and with purpose here. The choices of visual patterns, color usage, animated effects are all so carefully considered and clearly intended to be beautiful to look at. I can’t imagine the time and care spent on the placement of every triangle, the design of every place, and the consideration for how views shift along with player perspective.

It’s a truly impressive game to behold in so many regards, and nearly every moment spent with it is done so in wonder and excitement. I think that may be Manifold Garden‘s most impressive feat of all; that it keeps things fresh and different and interesting and keeps challenging your expectations throughout the entire game. It’s easy to pull out a few “wow” moments, but keeping them coming at a steady pace over an entire game is something really special. 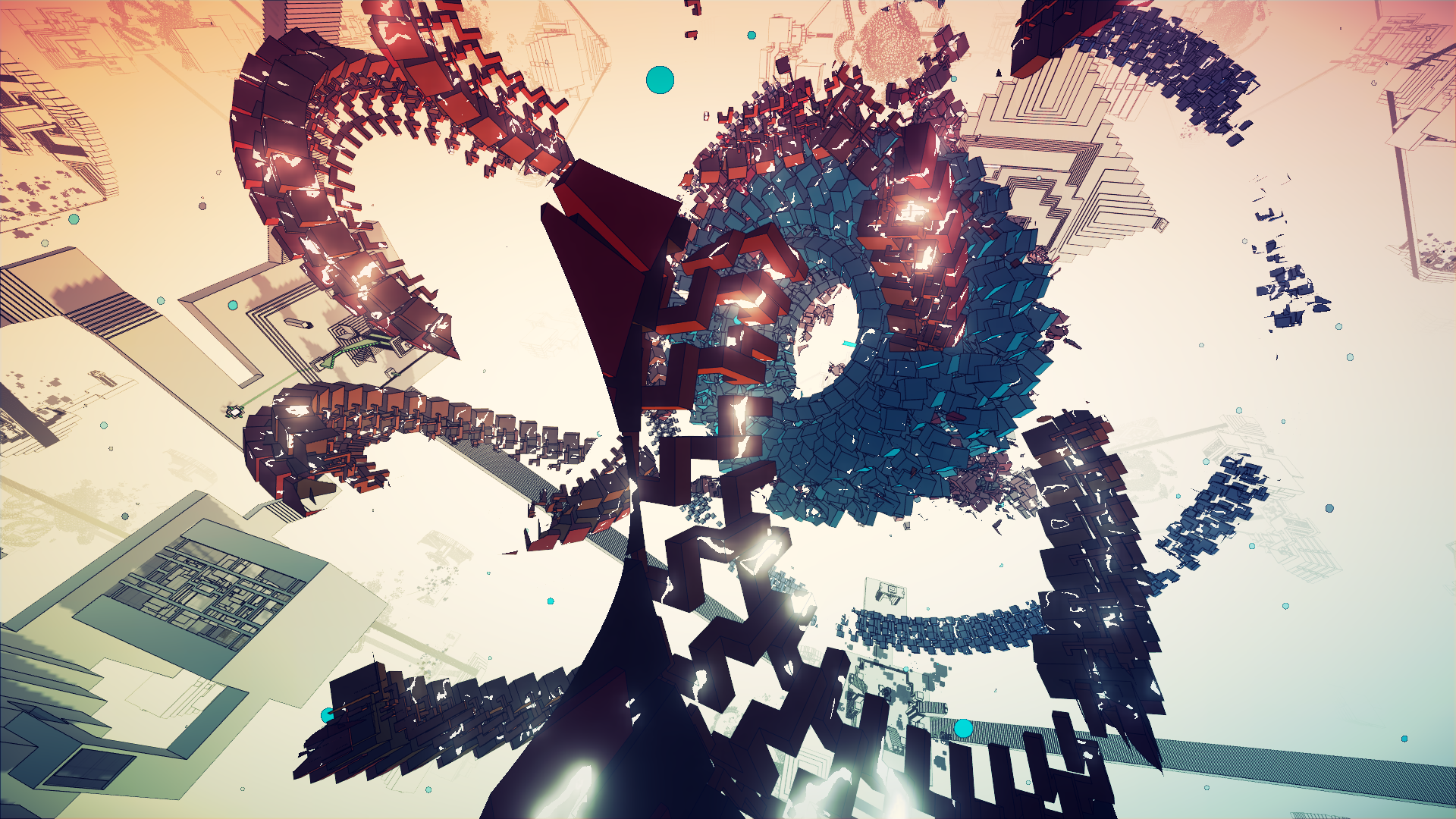 Manifold Garden delivers a unique, exciting world to explore with some mind-bending environments that tightly integrate with its puzzles and play systems. While it doesn’t reinvent the genre, it experiments in some exciting and playful ways that make it a memorable experience you’ll hang onto long after you’ve finished.