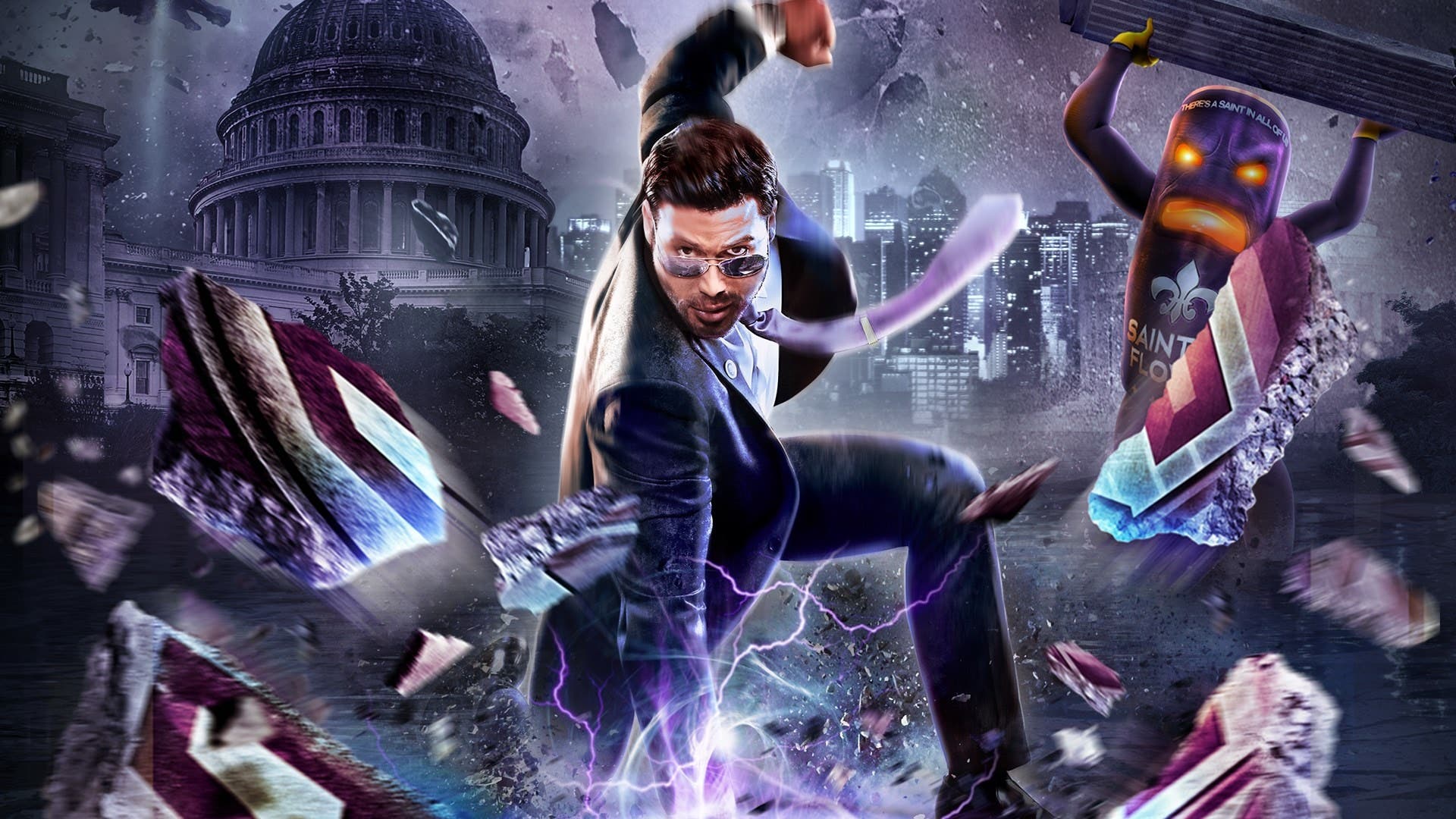 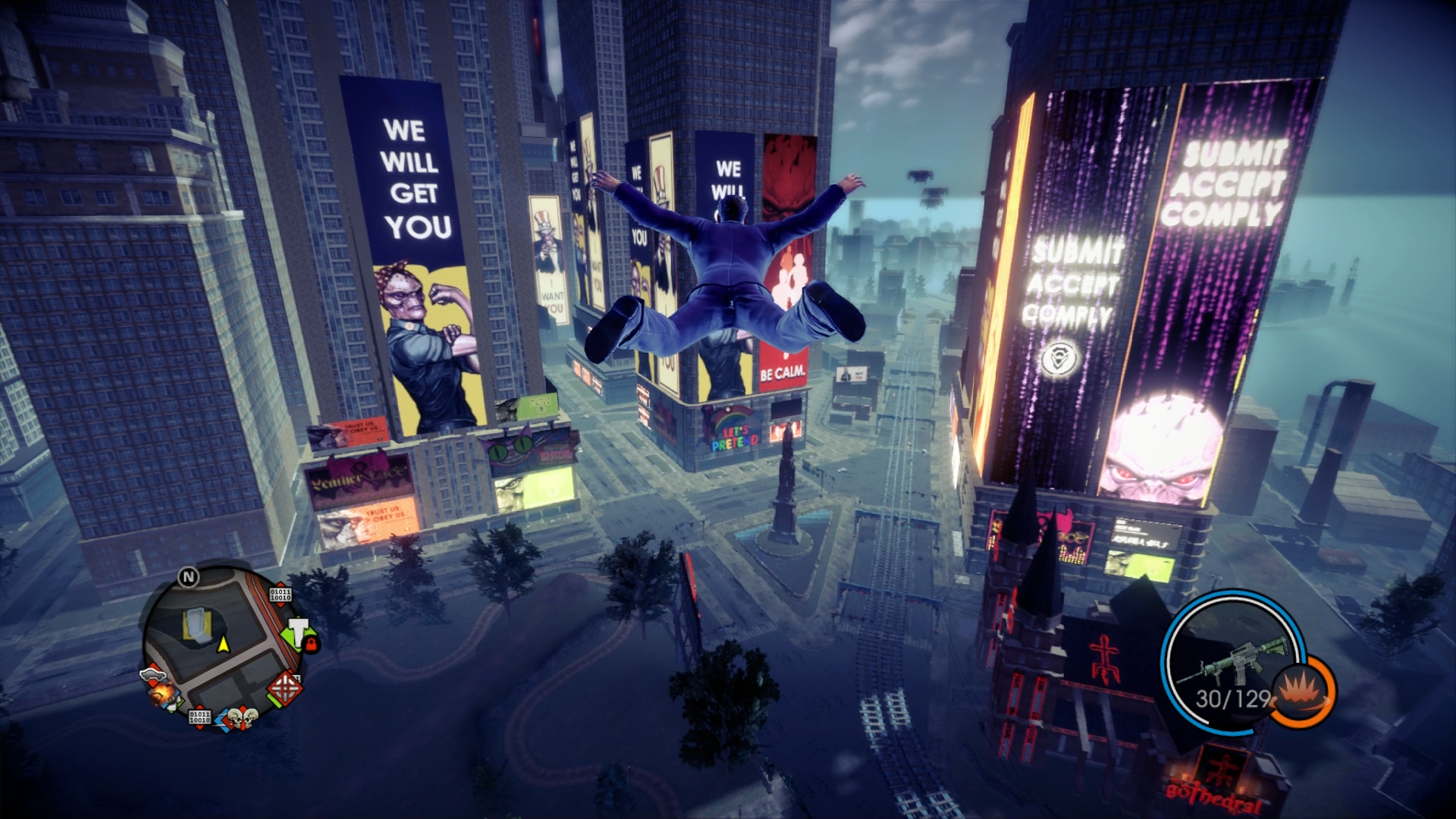 Saints Row IV debuted in 2013 as the follow-up to the wildly successful Saints Row: The Third, which was itself somewhat of a surprise given the series’ history as the scrappy, screwball take on a GTA-like open world crime genre that always felt like more of a budget or B-rank option. Saints Row: The Third redefined the tone of the series and leaned extra hard into going over the top with its action, differentiating itself by focusing on amping up the fun, mayhem and spectacle over GTA‘s ever-narrowing focus on realism.

By the end of Saints Row: The Third, the state of the game world and story had gotten so audacious that it seemed like it would be a tough act to follow. With so many memorable missions and satirical takes on everything from the military industrial complex to professional wrestling to hacker culture, where could the next game possibly go from here? It turns out the obvious answer was to keep running further away from the realm of realism and dive headfirst into the territory of big budget sci-fi action movies, and the result was (and for the most part still is) a thoroughly enjoyable, genuinely clever, and overall thrilling romp through an exploration of ultimate power fantasy fulfillment. 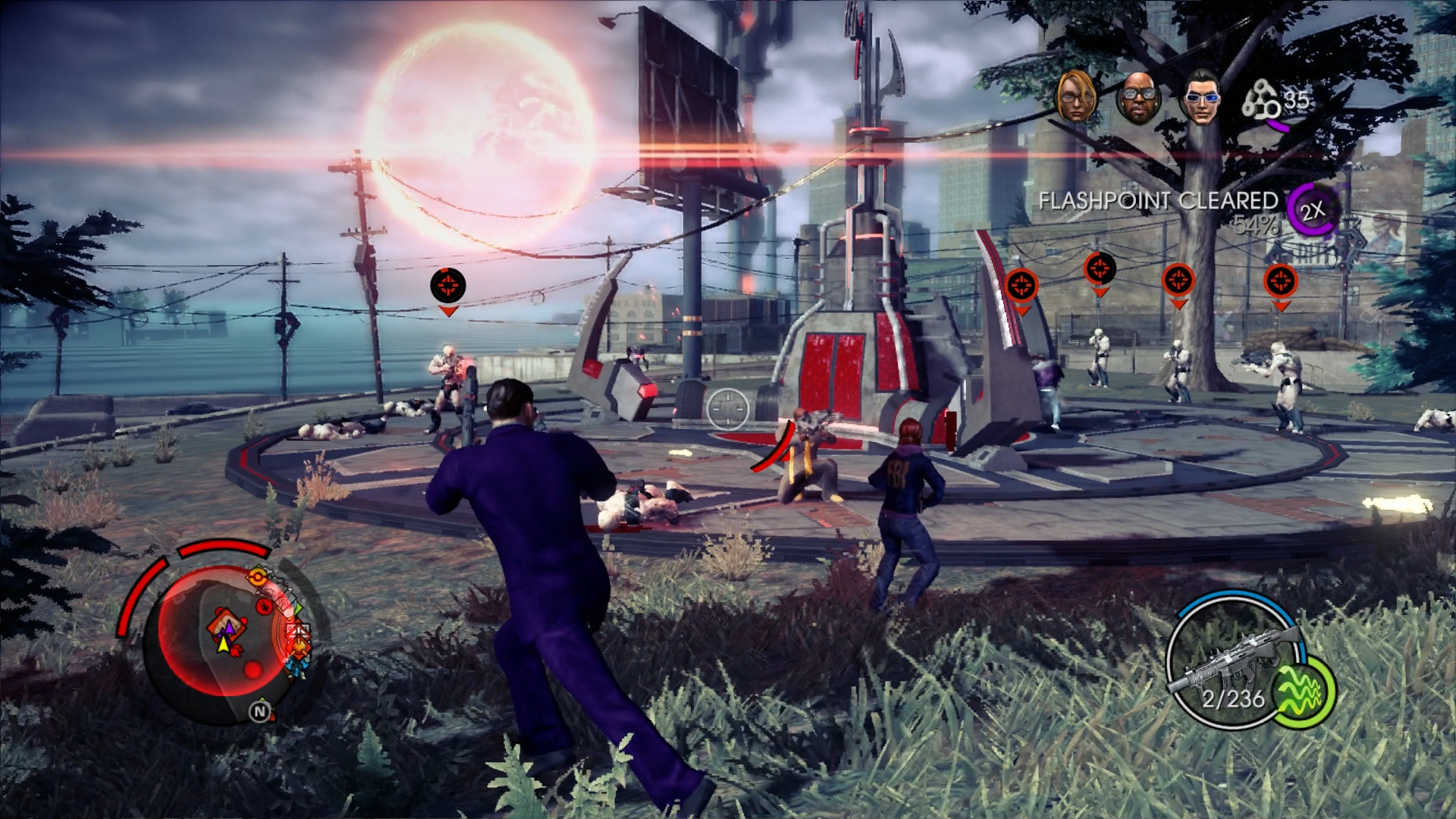 Saints Row IV got a bit of flack on its release for largely reusing the same game world as its predecessor, and while this was clearly done to help expedite production of the game, it would be uncharitable to say that the map was untouched or unchanged; if anything, a great deal of effort was put into reworking the city of Steelport to feel like it had truly been recreated and exaggerated in a bizarre, Matrix-like simulation of itself. Seven years later, the criticism of recycling the world pretty much falls away completely unless you happened to have played Saints Row: The Third sometime in the past year or two, and even still, there really is enough different here to justify revisiting Steelport in its new, extremely logged-on virtual form.

And what a glorious form it is. The real meat of Saints Row IV lies in its story missions, which feature a slew of all-new locales and settings that help contextualize and extend virtual Steelport, both in service of justifying its existence and establishing it as more than a mere rehash. The opening hour of the game sets the stage for the level of absurdity you’re in store for by cleverly expanding the game’s universe and upending your expectations of what you might find within it. You go from infiltrating a secret base in the middle east to riding a nuclear missile in-flight to disarm it (this scene still makes me laugh gleefully), to giving a White House press briefing (surprise, The Boss is now POTUS!), to being invaded by hostile aliens, fending them off on the White House lawn with an outlandishly patriotic cannon platform, to ultimately being jacked into a containment simulation all in the span of thirty to forty minutes. Everything you knew about the state of the universe in Saint’s Row is upended immediately and completely, clearing the way for Saints Row IV to do literally whatever it wants, and for you to be totally on board for the ride. 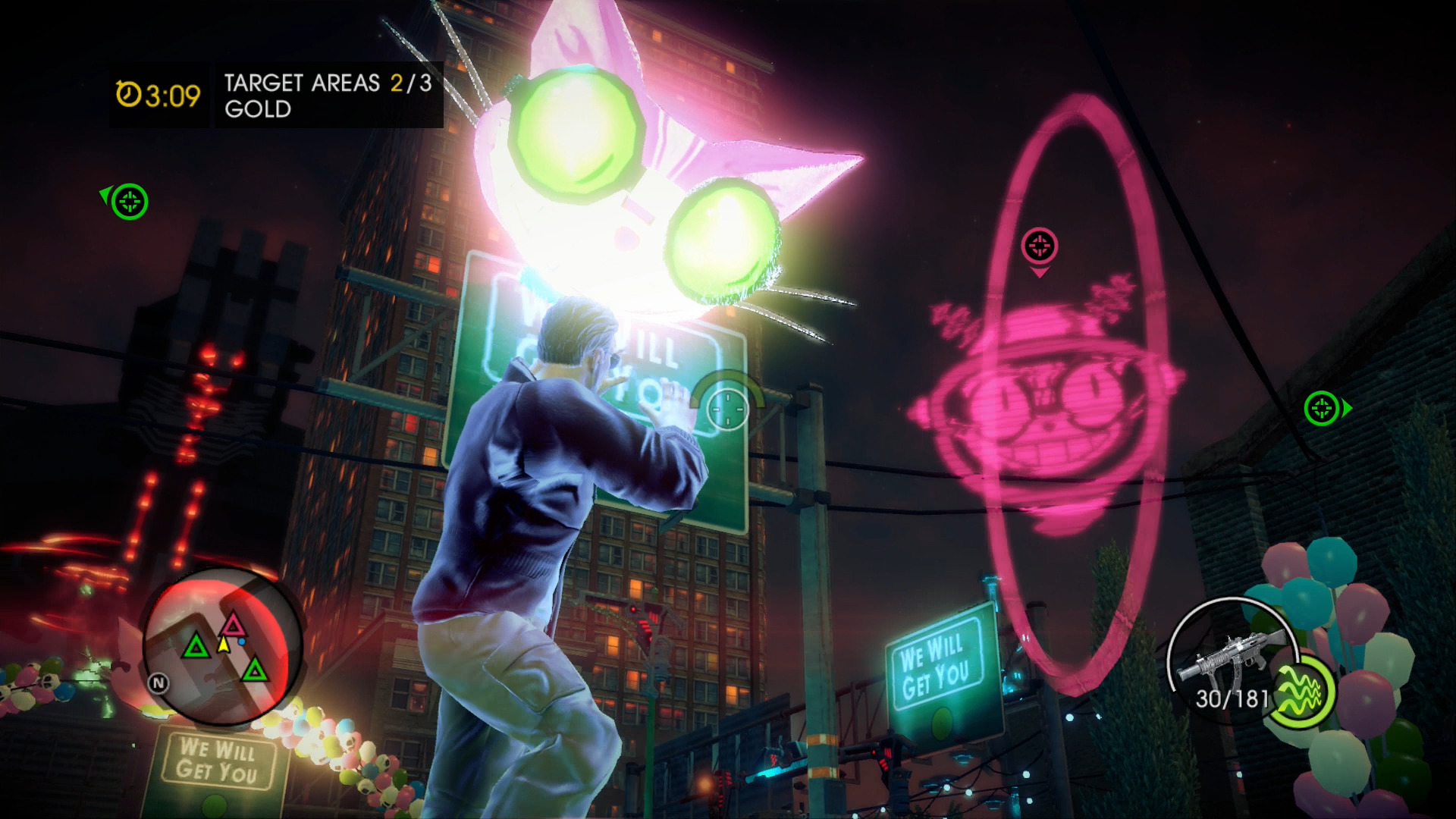 Saints Row IV has a lot of really good things going for it. The story is completely ridiculous and utterly thrilling in the way the best popcorn movie plots are. The writing and the satire are sharp and clever, and the vast majority of the jokes still stick their landing, which is a testament to the game’s commitment to humor that mostly engages with broader themes rather than topical subjects. The game is often more interested in playing on big pop culture touchstones spanning several decades than it is dissecting specific events in the real world over the same period, which is on key with the tone and theme of the game in general.

Playing the game itself is still extremely fun. Controlling your character feels a little outdated by the standards of today’s big budget games, but it’s also extremely forgiving with aiming and movement in general, and the addition of tilt controls to fine-tune your shots actually adds a lot to the experience. Generally though, this has always been a more arcade-like open world experience, and that is just fine. More importantly, as you get deeper into the game and your ability tree opens up more alongside Kinzie developing better and more pervasive hacks into the simulation, traditional concerns like vehicle handling, precision aim, and character agility cease to exist entirely, because you’ll be too busy sprinting across water like Sonic, leaping skyscrapers, and blasting foes with superpowers to even remotely care about how easy it is to pull off a head shot or drive a car through traffic.

Did I mention that Saints Row IV is more or less the Crackdown 2 (or even Crackdown 3) that many of us always wanted? Surely you’ve heard the comparisons by now, but in case you hadn’t, here it is. Saints Row IV is a better at being a Crackdown sequel than any of Crackdown‘s actual sequels have been, and this is a deliberate effort on the game’s part. Your upgrades are literally tied to glowing orbs you collect around the city, and improving those abilities gives you access to more orbs, and the pile-on effect of being able to traverse more freely and dole out mayhem compounds over and over, and good gracious does it feel good to leap all over the place and perform a ground-splitting superhero landing to clear a group of enemies.

Perhaps the biggest surprise about revisiting Saints Row IV all this time later is how well it runs and how good it looks on the Switch. Granted, this is a previous generation title, so one would expect the hardware to be capable of keeping up, but open world games are notoriously taxing on most systems, and the Switch does make compromises. Happily, though, Saints Row IV doesn’t seem to be at all hampered by the confines of Nintendo’s hybrid system. Granted, it is not as visually rich or performant as booting the game up on a gaming PC, but it is thoroughly impressive for what it is. The game maintains a fairly steady 30 FPS, textures and particle effects are decently detailed, the lighting is pretty decent in most cases, and overall quality is really solid. Anti-aliasing is minimal at best, which likely accounts for some amount of the performance tweaking, but this is far from surprising when it comes to Switch games. If this is your first time dipping into the series, it’s a fine way to play and I really love that big, ambitious adventures can fit onto the Switch and generally run so well there.

So, yes, the game is still great, and it’s still a blast to play. The presentation is phenomenal, it’s extremely well-polished, the voice acting is very good, much of the humor is still enjoyable (even if some of it is aging poorly), and it really does feel like the ultimate realization of the Saints Row fantasy. It may not be one of the all-time great releases in the history of gaming, but it’s a great deal of weird fun that subverts a lot of the expectations of the open world crime genre. The question remains to be seen as to whether Saints Row IV is the series’ final form, but if this is where things do truly leave off, it’s going out on a high note. There’s never been a better time to re-revisit Steelport.