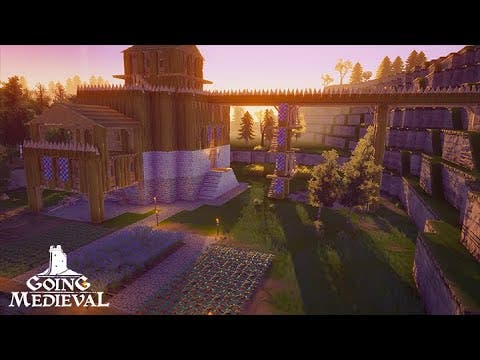 LONDON (May 19th, 2020) — Development colony Foxy Voxel and the villagers at publisher The Irregular Corporation announced they are collaborating to publish the upcoming Going Medieval today, and beta sign ups for the upcoming alternate-history sim are now live. A new trailer showcasing all-new updated gameplay footage was also released: https://youtu.be/Wy_rW95WtmA

Fans looking to get a head start on creating their village can head over to https://bit.ly/GoingMedievalBeta and sign up for the beta starting later this year.

Going Medieval transports players to the year 1346, just as the known world began to recover from the calamity known as Black Death. Survivors emerging from society’s ashes migrated and re-settled areas reclaimed by nature. Players will guide their villagers and protect them from outlaws, barbarians, and religious fanatics in a classless, borderless, lawless post-calamity age.

Plan, create and build your settlement using a variety of materials at your disposal, protect your villagers from the elements, including hunger, enemies and even the weather, and defend your village from rival factions by building impenetrable, multistory fortresses or strategically placed archers and traps. Observe your villagers, all with unique histories and agendas, to figure out how to best serve them – happy villagers are productive villagers, after all.

Going Medieval’s single-player experience puts you in control in one of the darkest and dangerous periods of humanity’s history – navigate the dangers or perish like so many before you. With almost infinite replayability options, no playthrough is the same.

Wishlist Going Medieval on Steam (https://store.steampowered.com/app/1029780/Going_Medieval/) and keep up with Foxy Voxel on Twitter @FoxyVoxel. Stay regular with the folks at The Irregular Corporation @IrregularCorp.