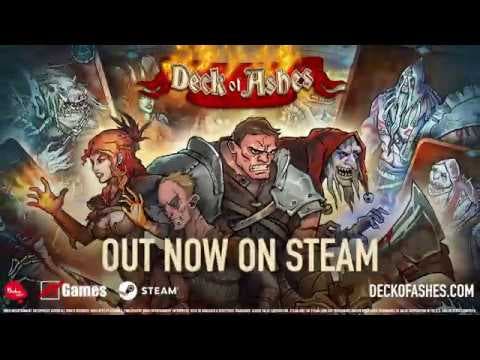 Deck of Ashes, the tactical hardcore RPG card battler releases in full onto Steam after a year of Early Access

Saint-Petersburg, Russia – June 9th, 2020 – Buka Entertainment and AY Games are happy to announce today the launch of Deck of Ashes, their hardcore story-driven RPG with card-based tactical combat. While the game was in Early Access for 14 months, it gained popularity among card battle genre fans and received extremely positive feedback. Deck of Ashes is available both for Windows and Mac OSX for only $19.99 USD.

Marking the long-awaited game launch, AYGames team is starting a Deck of Ashes Design-a-Miniboss Contest at their Discord server for the coolest and most ingenious miniboss concept. Three winners will get an exclusive Genetrix statue, and the prestigious role of “Boss Master” on their Discord server. Genetrix statues are hand painted and made of a durable composite material. Most importantly, the winning mini-boss designs will be added to the Deck of Ashes in a free update later this year!

More details about the terms and conditions of participation can be found here.

The full version of Deck of Ashes includes numerous improvements and new features: new character with a new campaign story and three new card archetypes, the epilogue which concludes the game story and the full Russian localization!

The game’s special “Day One Edition” will be available on Steam for only two weeks following the full launch. This edition comes with digital content such as the expanded art book, HD wallpapers, all character skins and the personal gratitude from the dev team!