For all of its frustration and foibles, Skully's traversal and puzzles make-up the most interesting parts of the game to keep you invested. With a story that manages to actually hit emotionally, it balances out the missteps of the platforming. The collectibles are rather unexciting and the color palette of earth tones lends itself to looking bland, but it'll surprise you. Much like the character, Skully is unassuming and meek, and will fill you with wonder throughout.

Skully from developer Finish Line Games and publisher Modus Games is a 3D puzzle platformer where you traverse open spaces to solve problems, combat enemies, and find a number collectibles that rivals Banjo-Kazooie. It harkens back to a specific era that many will find nostalgic. Skully has a lot of fun with itself, but also has its serious moments that keep it down to earth. There were times I was exasperated either due to imprecise platforming or when the game’s locomotion was interrupted, but Skully will bowl you over with its charm. In the words of the immortal Fred Durst, “Keep rollin’ rollin’ rollin’ rollin'”.

You find yourself as a resurrected skull on an island, with no body parts or accompanying limbs to help you. You’re given the appropriate and titular name of Skully. No one knows who or what he was before this, but he’s here now. Your skull is filled in by mud and clay to harden what would otherwise be a too brittle of a structure. You find Skully in the middle of a sibling rivalry to the likes of which no one has ever seen. Deities that command the elements are at war with one another, and you’re there to help put a stop to it. The story has predictable twist that I saw coming a mile away, but is still enjoyable for what it is.

Skully retains a classic puzzle platformer feel from beginning to end, as you don’t earn XP, level up, or are given the choice of how you progress. New abilities or powers are given at predetermined spots, and feels like you’re adequately comfortable with the last one to receive the new one. The game is extremely linear, save for its open-spaces of any given level. There’s one way in, and one way out. For better or worse, Skully is an homage to those kinds of games. 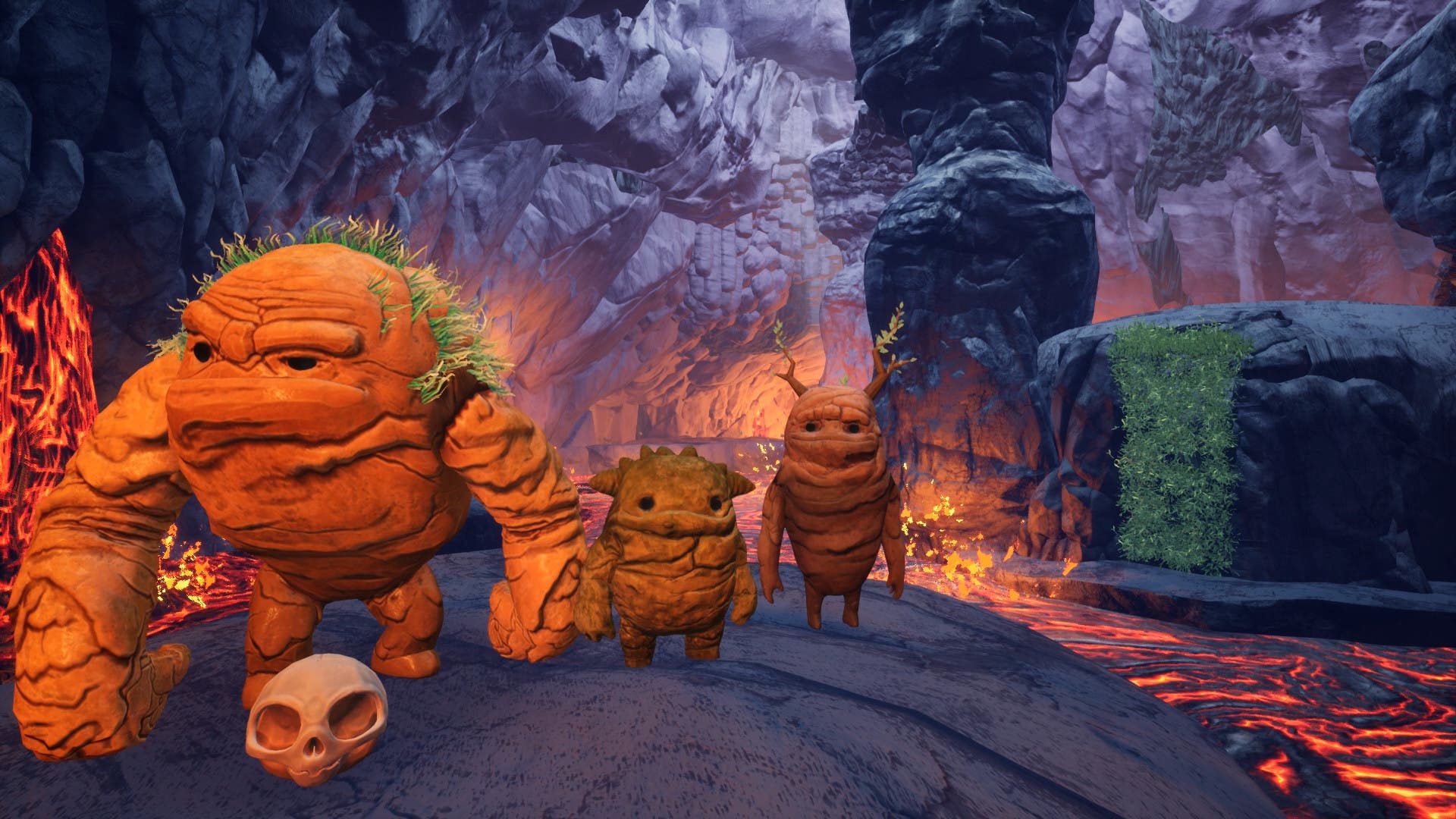 Skully takes on three different forms throughout the game which solve different problems. First you get access to a big balding dude who can punch down rock walls. Next is a short fast dude who can run really fast and maintain momentum in a jump to cross large gaps. And lastly is a medium height jumper with twig antlers that can double-jump, allowing you to reach tall heights. You cannot however, go back to previously levels with newer powers. The game’s levels are rigid to the point where you only have access to the powers at the specific point in which you start the chapter. Later levels introduce alternate abilities to their primaries. For instance, the big dude has the ability to throw Skully over large distances that neither of the other forms allow him to do. Later on, you’ll have the ability to move platforms, and even record a pattern of movement to create rising or lateral moving platforms. This was something I haven’t seen before, and I only wish there was more of it.

There’s sometimes oddities with Skully’s momentum, though. He can’t seem to ride lilypads or any kind of objects without falling or slipping off. It makes little to no sense what’s happening with the physics here. This leads to a lot of irritation when trying to make precise jumps or simply ride something and have a moment of respite from the platforming. It always catches you off-guard.

I saw the end credits after seven hours or so, and it felt just right in terms of length. There’s eighteen chapters which have their own contained levels to get through. It’s not until Chapter 8 where the game starts asking more of you, and needing you to use your critical thinking and multi-tasking of the various forms. Skully can have up to three active forms. Swapping at-will between the forms is quick and easy, or you can dismantle them all if you need to form a specific team. I never found any of the puzzles too hard to complete. I got tripped up a few times, but often the answer to the puzzle was right in front of you, and the solution was a lot simpler than I was thinking.

There’s a single collectible type in Skully, and they are in the form of flowers. There’s a lot of them to find, but they do two things. One is they can help guide you through a level if you get turned around. And second, they unlock artwork in the extras menu. They aren’t very exciting, but rather fitting for the game’s setting. The reason why I mentioned Banjo-Kazooie earlier is because there’s a whopping 5,500 flowers to collect. That’s a lot, but they are very close together and you’ll often collect 10-20 in a span of a few seconds, so they don’t seem too daunting. Mud pools are where you’ll collect your new powers, but they also act as checkpoints to save your progress, which is crucial when collecting to ensure you have a recent save in case you die. 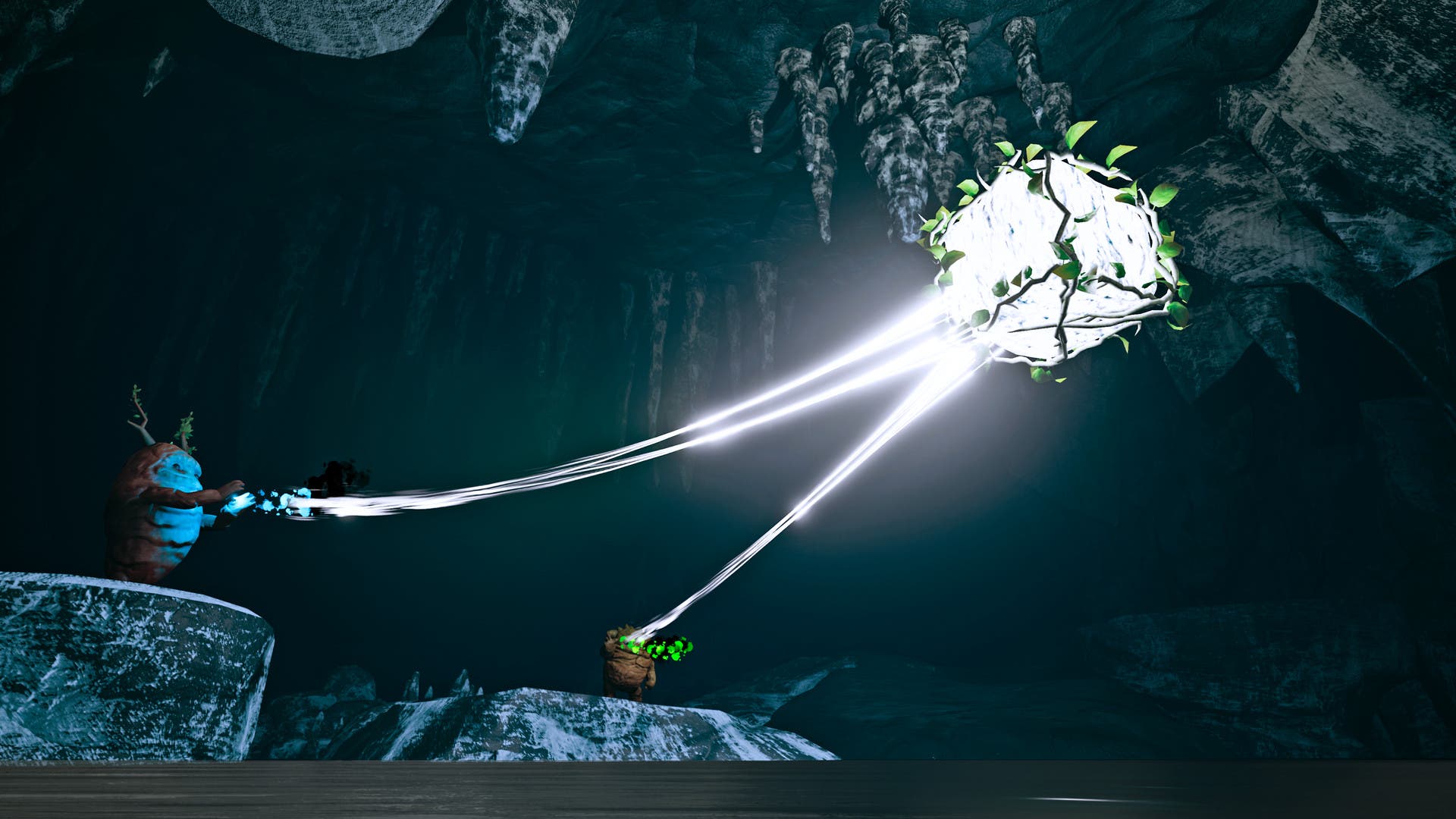 The game touts seven distinct ecosystems, but I found several to be repeating not so much in layout, but so thematically that it felt similar to one another. The game embraces nature and the four elements of earth, wind, water, and fire that it felt like things were falling apart or in disarray due to the war brewing between the brothers and sisters. Being able to convey that in pure visuals is really a testament to the detail that Finish Line Games was able to get across.

The visuals of Unreal Engine look great, but not always. In the darker areas, problems reveal themselves the most. And there’s a often desaturated look. Though, when the game wants to pop color, it does in spectacular ways like in the lava levels. It’s worth noting the voicework across the game. There’s some really great actors that are pleasant to listen to, even in cutscenes. Because, for better or worse, the cutscenes are still shots instead of being in full-motion and voiced. Since Skully lacks personality outside of emoting and just being good-natured, the game relies on the other characters. The game runs 60fps+ at all times, and while it isn’t a technical marvel, it’s incredibly performant in how you’d expect. 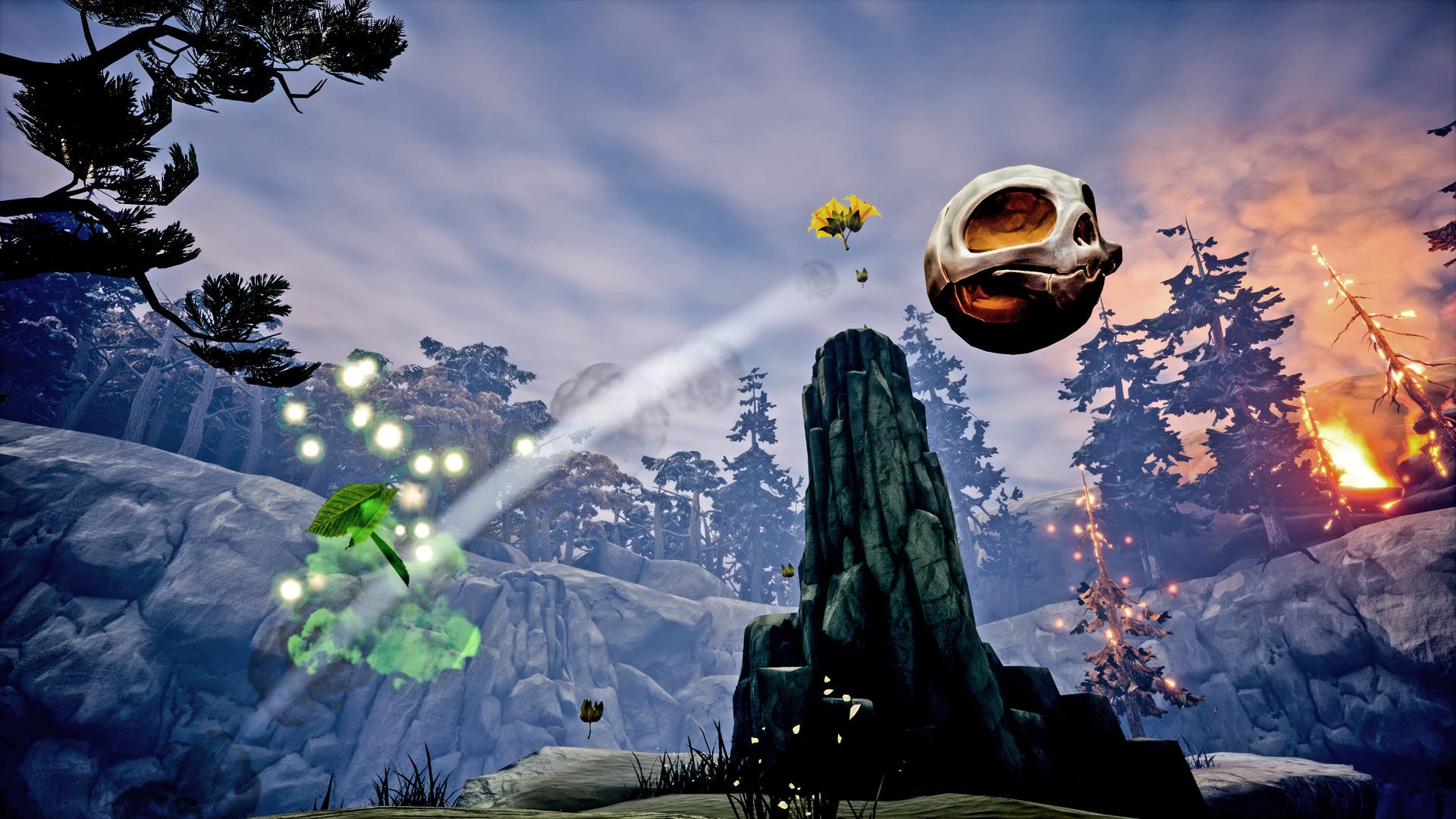 For all of its frustration and foibles, Skully‘s traversal and puzzles make-up the most interesting parts of the game to keep you invested. With a story that manages to actually hit emotionally, it balances out the missteps of the platforming. The collectibles are rather unexciting and the color palette of earth tones lends itself to looking bland, but it’ll surprise you. Much like the character, Skully is unassuming and meek, and will fill you with wonder throughout.