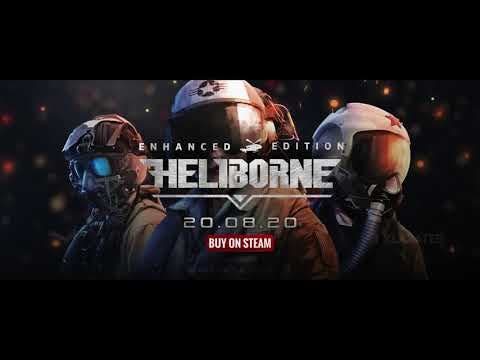 WARSAW, POLAND – August 20 –  Heliborne, the Ultimate Helicopter Warfare Experience, is now taken to new heights as the game officially becomes Heliborne: Enhanced Edition! The game’s definitive edition brings not only tons of improvement and new content but also debuts at a new price (29,99 USD/EUR) for both the game and all DLCs included!

Starting from today, Heliborne has officially become Heliborne: Enhanced Edition. From now on there is only one ‘Enhanced’ edition of the game containing the base game with all the DLCs released until now (over a dozen!) in the price of the regular game! Klabater decided that all the gamers who already paid for the original edition will now receive Enhanced Edition and ALL DLCs for free!

Heliborne: Enhanced Edition is the next big step for the franchise, meant as a final version of the Heliborne game dedicated to those who love the game already but also for newcomers. It’s a brand new visual quality mixed with significant gameplay overhaul. The development team is now working on the console edition of Enhanced Edition, and more info will be revealed soon!

“As we promised to our community, all who have bought the game before will get the free update to Enhanced Edition! This is our way of saying thank you’ to all the community that helped us and supported us for years. So, even if you own the basic version of the game with no DLC installed, you will still get access to both the Enhanced Edition of the game and ALL DLCs released until now! Enjoy!” said Michal Gembicki, Joint-CEO in Klabater

WHAT’S IN IT FOR THE PLAYERS?

With Heliborne: Enhanced Edition players get the basic game and over a dozen of cool DLC at a very, very reasonable price. A summary of a player’s ‘savings’ below: